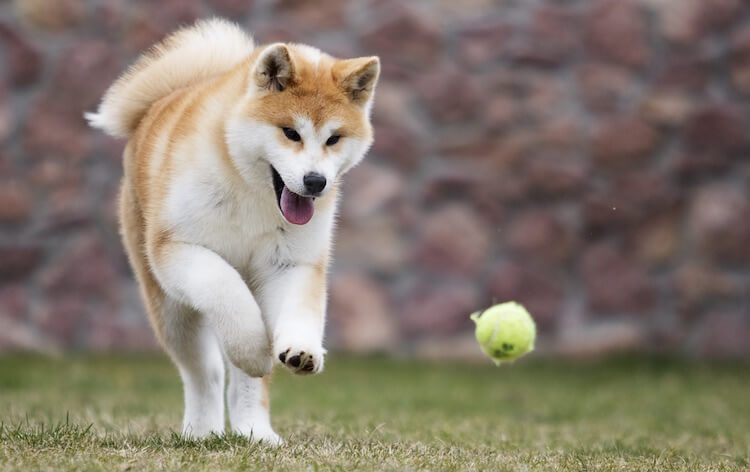 Not only is this breed confused with Malamutes and Huskies, but Japanese Akitas are often confused for their American cousins.

For those of you who love the Akita, you will know already there are two distinct types:

The Japanese Akita comes in fewer colors, when compared to the American (who has more shades in their palette), and is also smaller in both size and stature.

Whilst their appearances are different both types are similar in temperament and personality being the most loyal dogs to grace planet earth.

In this breed guide, we are going to explore the Japanese Akita discussing their history, appearance, breeders and how-to care for one! Whilst also sharing some little known facts like why newborn children in Japan receive a statue of this amazing breed.

History Of The Akita Dog

A spitz type dog, the Akita originated in the mountains of nothern Japan.

Owning an Akita was once restricted to imperial families as noblemen competed to breed large hunting dogs.

The original purpose for this ancient breed was to hunt wild boar, deer and bear! This goes far in showing us how truly powerful this breed is.

Thanks to their presence and power, families soon employed this dog as their guardians and this was where their affinity to children was noticed (they are incredibly loyal and protective).

But During WWII, we nearly faced losing this impeccable breed. Dog food was scarce, but due to their size, they provided a meal for starving humans and their dense coat also served to keep soldiers warm!

Numbers were dwindling in their native Japan and then the Government ordered remaining dogs to be killed on sight to prevent the spread of disease.

Distraught owners took their dogs to the mountains to escape. During this period, they bred Akitas with their ancestor cousins. That and the crossbreeding of some with German Shepherds helped to keep the breed alive.

After WWII, numbers stabilized, and lovers of the breed started to breed for standardization. US servicemen fell in love with the Akita and started taking them home with them!

Which Kennel Clubs Recognize The Akita?

To this day, the American Kennel Club is the only club that sees the two varieties (Japanese and American) as the same breed and allows breeding between the two.

Other clubs around the world, including the World Canine Organization and UK Kennel Club actively register two different types.

This breed was a historic guardian dog and they haven’t forgotten this.

For that reason, they will be wary of strangers and also bark to alert. If there is nothing to alert you to, they will be the quietest dog you could wish to meet!

Many breed standards will tell you that these dogs need to be in a single dog household and that same-sex aggression is a given.

This is largely untrue, providing you have experience of large breeds and know how to correctly train and socialize them.

The Akita can be a super-playful and friendly dog if they are raised right and introduced to other dogs, pets, people and noisy equipment from a young age.

Is The Akita A Good Family Dog?

If you don’t have experience with large breeds, then this breed just simply isn’t the one for you. He’s not an ideal first-time dog.

He is mischievous, aloof and stubborn. But he is docile, dignified and intelligent. The Akita is loving and affectionate with his family but standoffish and distrusting of those who give him reason to be.

Mouthing is an endearing trait of this breed, there are stories that this breed used to lead children by their hand.

However, for those who don’t know the breed and listen to the description of a fighting dog, this can be unnerving the first time he tries it!

If you want to know the true Akita temperament, then read the story of Hachiko.

Taking Care of Your Akita

This dog needs a family who understands their needs and endearing qualities.

They also come in relatively high on care needs because their huge size means they eat a lot of food; their dense double coat needs a fair amount of grooming and training will be a huge part of your life.

How Much Should You Feed An Akita?

The best food to feed your Akita, is the best you can afford. Whether this is dry, canned, dehydrated or raw.

Your dog has a requirement for protein and fat.

Dogs don’t actually have any requirement for carbohydrates, unless they are in their cooked form during times of high energy expenditure (e.g. working lines).

You should pay particular attention to what you feed your puppy.

As he is a large breed, he will undergo a period of rapid growth. This means that his bones will be less dense and more prone to trauma and injury.

Excess calories during this stage can contribute to the rapid growth and also be a cause of weight gain which is putting an undue burden on the already less dense bones.

Also avoid excess calcium during this growth phase. You may think that calcium is necessary for bone health, and it is, but excess calcium will be absorbed and can affect skeletal formation.

How Much Exercise Do Akitas Need?

Being a historic hunting breed, the Akita has always been active.

They still need to remain active, even as a pet. Your Akita will need between 60-120 minutes of exercise per day when he is fully matured.

For all of those walks, it’s best to keep him on leash – remember his stubborn streak! Some people also become intimidated by large breeds, so it’s just good owner etiquette.

Despite their size, they are incredibly agile, so if you wanted to start agility or flyball, he’d be a welcome participant.

However, you can also play a range of brain games with your dog to stimulate him mentally (instead of physically).

As a puppy, his exercise needs to be controlled. Stick with the five minute rule; 5 minutes of exercise per month of age. Maintain this until at least 12-18 months of age.

You should avoid excessive running and jumping, especially until his growth plates have closed.

It is also advised to avoid early neutering as it can lead to a range of orthopedic and joint disorders.

How To Train Akitas

The Akita, despite being intelligent, is a challenge to train. He is stubborn and aloof and often adolescent even into his old age.

You should start training as early as possible and like all dogs, they respond best to positive reinforcement and reward-based training.

Although we have said that training per se can be a challenge; they are incredibly intelligent. So, brain games are a welcome challenge for them; especially if they are food related!

Start socializing your Akita when he is young; introduce him to people, other dogs, other pets and the environment. Never overdo it; keep sessions short and always end on a positive.

Most dogs will respond to food in their training, but if he is play led, then you can always offer a toy or ball. Some Akita’s are renowned diggers, so if you have the space, use a sandpit in your yard and let him dig!

Remember this breed is stubborn, so recall training is often a challenge.

Most owners learn very quickly to simply keep their dog on a long leash, unless the area is totally secured with 10ft fences, as some are renowned escape artists (much like the Husky).

How To Groom An Akita

Your Akita will shed so much that you will be vacuuming daily.

Brushing three or four times a week will keep his coat in good condition.

Keep an eye on his nails and trim them when necessary. Also keep his erect ears clean, along with his eyes! Brush his teeth regularly too as some can struggle with their teeth.

Unfortunately, like most dogs, they are prone to certain health conditions.

Primarily, they suffer from orthopedic conditions such as hip or elbow dysplasia.

This is where the bone doesn’t sit as it should in the joint. But as we’ve mentioned, monitoring exercise, managing nutrition and considering the impact of early neutering on the development of these conditions can help to prevent them.

Akitas can also suffer from immune sensitivity to vaccines, drugs, insecticides, anesthetics and tranquilizers. So you should always consider this if your dog needs any veterinarian attention.

The Japanese Akita stands dignified and strong, you will notice the difference between the Japanese and American purely by appearance.

How Big Do Akitas Get?

The Akita stands between 23-29” in height and will weigh in around 50-85 pounds, and females are usually smaller and lighter.

The Japanese variant is most commonly seen in red and white. But they do come in a range including: golden, white, red, black-brindle, silver-brindle and silver-brindle.

They look very fox-like and almost petite in comparison to their American siblings.

Most are described as smiling and you will spot their white face mask from a mile away.

Their black eyes, nose and lips stand out; but almost bring their features to life!

They have a thick dense double coat, which takes a lot of grooming!

Its harsh outer layer protected them from the tough weather in the Japanese mountains whilst the downy undercoat kept them warm.

If you actually want a ball of fluff as a puppy, then look no further than this puppy.

Like most erect eared dogs, as a puppy, the Akita will have floppy ears and at around three months of age they will just stand up.

Being a large breed, these dogs won’t reach full maturity until around 18 months old.

Emotionally, we are not sure they ever grow up! They can be incredibly mischievous and adolescent for most of their life.

How Much Do Akita Puppies Cost?

Their litter size varies, some will give birth to around 3 puppies, whilst other dams will have a litter of 7.

The Akita is the ultimate example of loyalty and fidelity.

Not for first time owners, these dogs need someone who understand their needs. They will suit any family who can do this.

Coming in high on exercise, food and grooming needs, they aren’t a bear to bring home without thought.

But if you understand their quirks, their need for early and continued socialization and training, this dog will be the ultimate companion.

When you’re his person, you will be for life!