First registered by breeder Lois Scwarz in the 1980s, the American Alsatian, made popular by their striking similarity to the Dire Wolves from Game of Thrones, are a giant sized dog breed.

Majestic, calm and relaxed with a stable temperament and low energy drive, these giant dog breeds were specifically bred as family companion animals with great health.

With a breeder code of ethics, temperament testing and strict requirements for the longevity of the breed, it’s hardly surprising that this dog is one of the most stable, poised and loyal large breeds around.

Interested to learn more about this bold, but, never hostile canine?

In this article we will explore the origin of the American Alsatian, their temperament and what it takes to care for these impressive wolf-like dogs on a day to day basis.

What is an American Alsatian Dog?

This is a pure bred companion dog first seen in 1987. These gentle giants were specifically bred to be the perfect family companion.

Despite not yet being recognized by any major Kennel Club, they do have their own National American Alsatian’s Breeders’ Association, and the first kennels to produce this impeccable dog is still in existence.

1987 was the start of the Dire Wolf Project. Lois Scwarz (then Denny), produced the first litter of American Alsatian puppies by mating an Alaskan Malamute with a German Shepherd.

Lois, having had an interest in producing a well mannered, stable large breed dog for a number of years, created a breed standard in her mind.

The first piece of the puzzle was the German Shepherd cross Malamute. The first generation would subsequently be called the Alsatian Shepalute.

Over the next few years, Lois bred a consistent line of mellow temperaments, but, was concerned that her dogs still looked too similar to the German Shepherd in appearance. She then decided to breed her offspring with English Mastiffs, to further develop the size and stature of her perfect breed.

Again, these dogs were bred for even temperament and stability. In 2002, Lois added some Anatolian/Great Pyrenees mix into her Shepherd x Malamute Mix.

Now present day, this dog is in its fifth generation since the last cross-breeding, rendering it a pure breed again. 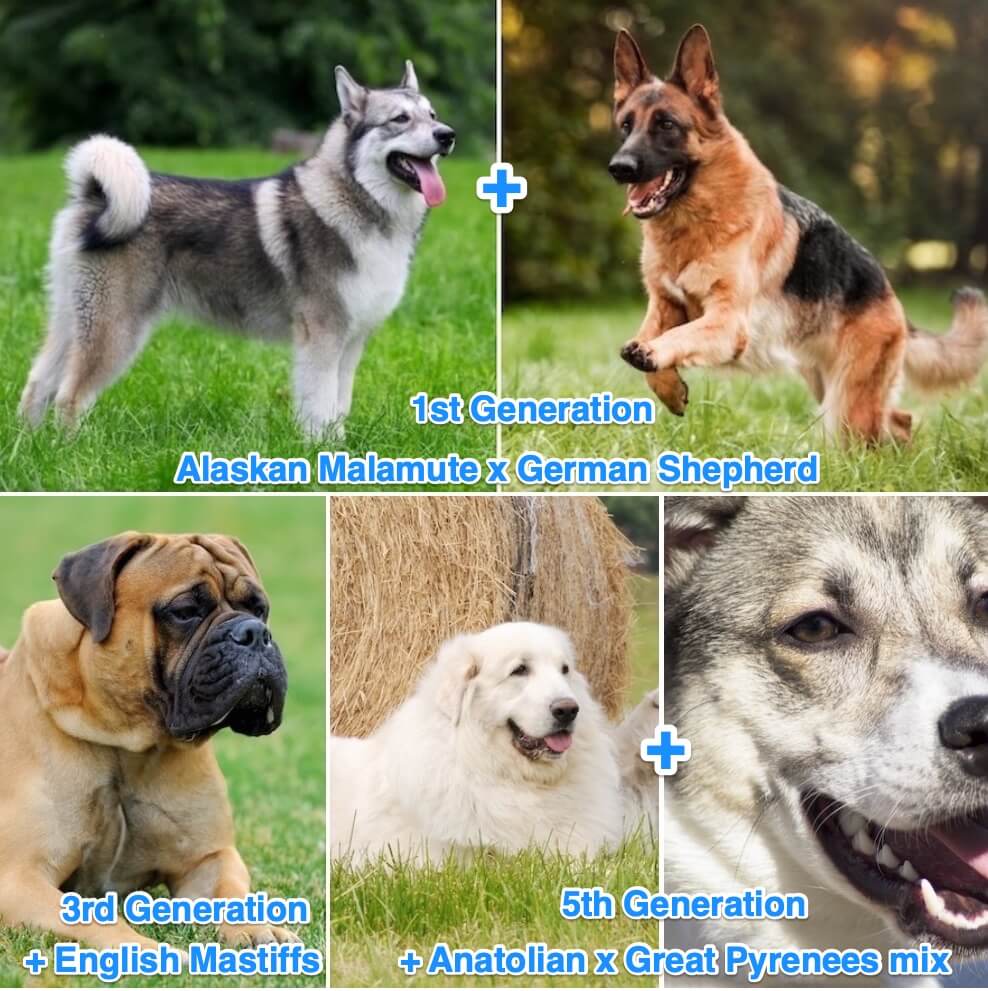 Remember the name of Lois’ project… the Dire Wolf Project?

The Dire Wolf (now long extinct) was a close relative of the Grey wolf, the hope for this dog was to have a similar resemblance to the Dire Wolf but all the adaptable, mellow and gentle demeanor of a domesticated dog.

With its breeding history, this dog has had a number of names:

As we have mentioned, the kennel of origin is still in existence, and this pooch has its own breeder’s club. For this reason, finding a reputable breeder is relatively easy.

Breeders in the association only breed for health and for this peace of mind; you can expect to pay in excess of $2000 USD for an American Alsatian puppy.

The American Alsatian was bred to be calm, mild mannered and adaptable to modern living. Dogs who demonstrated shyness, hyperactivity, excessive barking or any signs of aggression were excluded from the breeding pool.

This gentle giant is confident and fearless, stable and predictable. The perfect large breed for a respectful family who understand his needs.

Not a guard dog, they are purely a companion; they adore being with their family and if socialized well from a young age will generally tolerate humans and animals of all shapes and sizes.

Don’t mistake their even temper for being a push over; they are large, powerful dogs and kids should be involved in their training and socialization; giving them space when necessary.

Being low on the energy front, this is merely a reflection of their temperament, puppies are still clumsy and love to play. Out in the yard or in the woods, 60 minutes of exercise is usual for these guys; keeping them content and stimulated; not like their active Shiloh Shepherd cousin.

They aren’t renowned for being hyperactive, excessive barkers or highly strung, if any of these behaviors arise check for any health issues with a veterinarian and speak with a behaviorist on how best to move forward.

Caring for am American Alsatian

Being laid back, on the outside, this dog would appear easy to care for, but, they still need to be socialized, trained, groomed and fed!

Understanding the needs of this companion will ensure that you do raise a well-rounded, stable dog.

How Much Should You Feed This Dog

Breed founder, Lois Schwarz, suggests that as puppies these dogs should be fed three to four times per day. When fully matured, this will often reduce to two meals per day.

Free feeding should be avoided as it can contribute to over-feeding, it is also well known that over-feeding is of detriment to the skeletal development of large breeds; along with inadequate calcium levels.

When a dog eats too many calories, which includes too much protein, it results in fast bone growth. This fast bone growth increases remodeling which contributes to structural defects within the bone. This results in skeletal issues later in life.

Our advice is to supplement large breed dogs with calcium.

In general, your puppy’s diet should include between 4.4-5.6 grams of protein per pound of body weight and around 2.7 grams of fat per kg of body weight. This decreases by around 75% once matured.

Discuss any queries regarding the nutrition with a qualified veterinarian.

How Much Exercise Does This Alsatian Need?

As we have mentioned, the American Alsatian is a relatively low energy dog, this doesn’t mean they don’t enjoy their walks. Upwards of 60 minutes of exercise per day will keep this dog very content.

Intelligent and alert, he is incredibly trainable, recall wouldn’t be the reason you would keep him on leash; it will be his size. Remember that other people can be intimidated by large dog breeds, so consider this when out walking.

We know that large breeds are more predisposed to conditions like hip dysplasia due to their fast growth. Studies suggest that keeping puppies away from stairs and allowing only short periods of off leash exercise on a soft surface can reduce the chances of early development of the condition.

When fully matured, this confident pooch will happily hike up mountains or amble down to the dog park. They are also quite partial to playing in their own yard. Due to their size, they thrive in a larger home.

How Do You Train This Breed?

We know that dogs respond best to positive reinforcement and reward based dog training, the American Alsatian is no different.

They are calm, alert and intelligent, making them responsive and very trainable. To maintain this demeanor, avoid the use of punishment during training; we know punishment leads to aggression and stress which causes health and behavior issues in your dog.

When he is behaving how you want him to, praise and reward him with some healthy dog safe snacks.

If you want a well-mannered, gentle giant you need to socialize him from a young age. In a safe, controlled way, introduce him to different people, environments, noises and events.

Match his calm; develop a consistent routine and give him time and patience to work on his training and socialization.

Despite the great attention paid to breeding stock and the range of health tests carried out, there are still some health issues.

Not surprisingly top of the list, like all large breed dogs is hip and elbow dysplasia. Breeders registered with the National American Alsatian Breeder’s Association must hip and elbow score their stock, however, it is known that well-scored parents can still have a puppy which later develops hip and/or elbow dysplasia.

Currently, it has been reported by the breed association that there isn’t hip or elbow dysplasia in any of the lines at this time.

Panosteitis is another common condition in rapid growing dogs, this is where there is inflammation in the bones of the legs. This is very common in German Shepherds.

Another bone related issue, Arthritis can often accompany dysplasia due to the rubbing within the joint.

Finally, some of these dogs have reportedly had epilepsy which is an uncontrollable burst of electrical activity in the brain which present as a seizure.

Every on of these dogs, when purebred, should come with DNA tests for all of the generically testable inherited diseases.

A healthy and purebred Alsatian will have a lifespan of between 12 to 15 years based upon their size and sex.

Lois, the original breeder, remains unsettled with the appearance, but, she always held true to breeding for temperament and personality before appearance.

In an attempt to resemble the Dire Wolf, the favored color of the Alsatian is Silver Wolf Grey. Yet it is possible to find pups that are gold wolf Grey, black or cream.

Their coat is coarse and thick in the winter months, yet thin and short in the summer months. They boast a double coat which sheds around twice a year.

Regular brushing will keep his coat in tip top condition.

They are strong and muscular, under all of that hair, a truly impressive sight!

This dog stands broad and impressive. Due to their large bones they can appear larger than they actually are. Males should weigh no less than 100lbs and females no less than 90lbs. At the withers, males will stand up to 33” and females up to 30”.

The American Alsatian was bred to be confident, calm and alert.

Their large stature shouldn’t intimidate, they are powerful yet predictable.

Wholeheartedly devoted to their family, but a rubbish watch dog, you won’t hear a well socialized American Alsatian bark.

Their intelligence and inquisitive nature means they are super trainable; providing your short training sessions are full of positive reinforcement and reward.

Classed as low energy, this is merely due to hyperactivity being out-bred, your American Alsatian will love his walks and is best suited to a large home with his own yard.

Schwarz Kennels openly state that “Schwarz dogs are not working dogs!” This couldn’t be more true – a well bred, trained and socialized Alsatian is a gentle giant and companion for life.

First seen in 18th century Scotland, the Golden Retriever was used to retrieve fowl and other animals that had been shot during a hunt. In our modern era, this breed is more commonly seen as companion or service dogs than they are as a hunting Continue Reading →

Red Husky: Everything You Should Know About The Red Siberian Husky

The red Siberian Husky dog is known for their mischievous nature, playfulness, and high energy drive. All Huskies (no matter the color) have the characteristics of true working dogs: running for hours, thriving off exercise, and requiring a job. Unfortunately, no matter how beautiful, because Continue Reading →