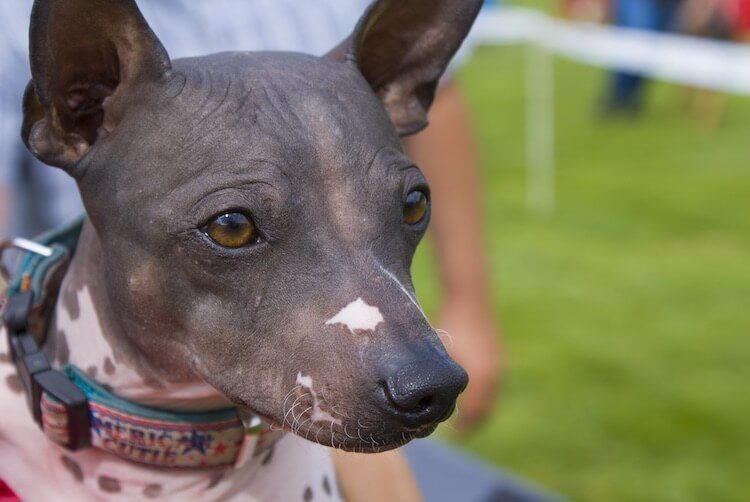 As the American Hairless Terrier’s name would suggest, these small dogs are completely hairless; except for their whiskers and eyebrows.

This breed was originally bred to help hunt and exterminate rats and is descendants of the rat terrier.

Sometimes referred to as “naked-canines”, this breed comes in a large variety of colors from completely black to white with brown spots.

They stand between 12 to 16 inches tall to the withers and have tall erect ears.

The American Hairless Dog is known for its spunky and courageous attitude, and loves to spend time with their families, keep on reading to learn more about this canine…

The American Hairless dog belongs to the terrier-group family and are closely related to their Rat Terrier siblings.

Although they were originally bred to hunt rats, and may be classified as hunting dogs, they are mainly referred to as companion pets. This is because they spend most of their time lounging around the house with their family.

This canine’s temperament is typically very friendly, but their personality is unique depending on each dog.

They are known to be protective of their families and sometimes territorial, if these behaviors are not managed early on the dog may develop a lower level of aggression.

Due to their somewhat recent recognition as an official breed (in 2016), there are not many kennel clubs that recognize the American Hairless Terrier.

However, this dog breed is recognized by the:

This canine was only recognized by many kennel clubs during the past two-decades due to their close resemblance with the Rat Terrier.

Not an extremely common breed of dog, they are difficult to recognize at birth, so the best place to find a purebred breeder is the marketplace of the American Kennel Club or via their official club website.

The American Hairless Terrier is the only hairless breed native to the United States.

Their unique lack of fur was unheard of before this breed, however two hairless siblings were bred together, causing their offspring to be completely hairless and giving birth to a new breed.

Although they are mostly descendants of the rat terrier, there is some evidence that they are also related to the smooth fox terrier as well.

The hairless puppies were born and bred in Louisiana and were officially recognized by the AKC in 2016.

A few of these puppies may keep their short thin layer of fur, but, it is far more common for their fur to fall out whilst they are very young.

Some purebred American Hairless Terrier puppies may cost between $800 to $1,800 USD.

These Terriers will only weigh 16 pounds (by the time they are full grown) and they reach maturity between eight to nine months. You can see a growth chart of these canines below:

Originally named feists, due to their feisty attitudes, these energetic dogs are known for being very loving and confident.

They can be yappy at times and tend to bark at people passing by their home, but, outside of being protective of their families, they are typically quiet.

Due to their history of rat hunting this breed tends to have a very high prey drive (especially when it comes to smaller animals).

The American Hairless Terrier is typically able to distinguish between threatening and non-threatening situations, but, they tend to stay cautious and protective of their families.

The American Hairless Terriers is very energetic and can be protective of their families.

Because they were originally bred to hunt and kills rats, this canine is known to have a high prey drive.

If there are small animals in your family home already (e.g. guinea pigs or hamsters) it would be a good idea to keep this dog away from them or monitor their interactions very closely.

These feisty dogs can also be territorial at times, which can be perceived as aggressive, however, this canine is not known to be very aggressive.

American Hairless Terriers prefer to spend their time lounging around with their families, but, they also love to play.

They are very affectionate towards their families and, more often than not, are welcoming of strangers, however, if they are not socialized correctly they may be a little bit more wary towards strangers.

As long as this canine is socialized at a young age, they tend to be very good with other animals.

This breed is known for preferring to live with at least one other dog.

Appearance Of An American Hairless Terrier

This dog breed is known for looking very muscular due to its lack of fur.

Typically this dog is totally hairless, however, because of their Rat Terrier and Smooth Fox Terrier siblings, there is a variety of this breed which has a short thin coat.

They have very smooth and warm skin, which makes them very easy to identify and are one of only four hairless breeds recognized by the American Kennel Club:

This canine looks very similar to the Peruvian Inca Orchid, however the American Hairless Dog is typically much smaller.

This breed stands between 12-15 inches to the withers and can weigh anywhere between 12 and 16 pounds (once full grown).

This dog is classified by most major kennel clubs as a medium sized breed although they are still on the smaller side of medium!

The American Hairless Terrier can be any variation of color including: spotted and solid colors.

However, in order to be recognized by the American Kennel Club they cannot be merle or albino.

Because the American Hairless Terrier only has whiskers (and occasionally eyebrows), they don’t have a coat.

Even the variety that has some fur only has an extremely thin single-layer coat.

Hairless dogs are great for allergy sufferers, as the most hypoallergenic breeds, because they don’t shed.

Since this breed is hairless, the only grooming they require is a bath once every one to two months.

The American Terrier which has a very thin layer of fur also doesn’t require much grooming either; brushing them with a bristle brush every two weeks is perfect.

As with any dog, you should clip their nails every two to three weeks and make sure their teeth are clean.

Because this canine is susceptible to ear wax buildup, cleaning their ears every time they have a bath is always a good idea. 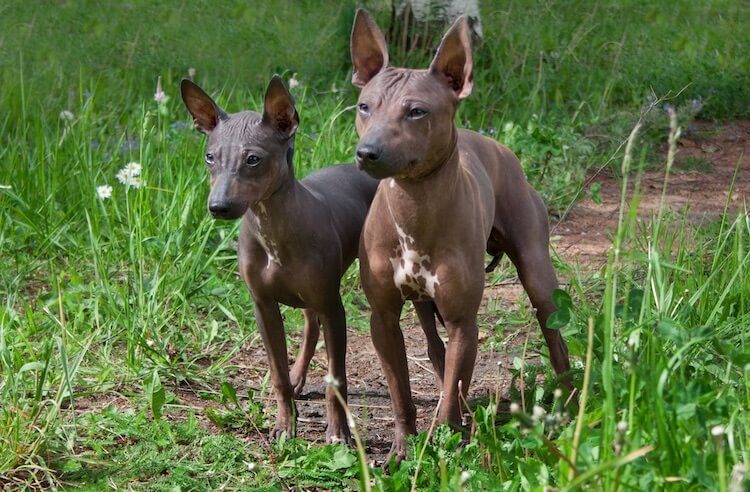 Whilst these dogs are very energetic, they don’t require a lot of time exercising because of their small bodies.

They are best suited for people or families who have short periods of time throughout the day to play with their dog.

This pooch requires very little grooming and is extremely trainable.

This hairless terrier does best on a high nutrition kibbled-diet, but he can also eat wet food or a raw diet.

If you do decide to feed a raw diet, make sure you talk to your vet to discuss whether you need to supplement.

The American Hairless Terrier should eat two meals daily of around 175-200 calories each serving; once in the morning and once at night.

This breed sometimes requires supplements for their skin, as it can get dry because it has no fur to protect it from the elements. Coconut oil is an excellent natural resource to add to their diet to help the dog’s skin from getting too dry.

This breed is very energetic, but surprisingly, he doesn’t require an extensive amount of exercise.

Some time spent outside in a fenced in yard, or short 20-30 minute walks, are both a great form of exercise for this small dog.

Walking this dog on a leash would be a good idea due to their high prey-drive tendencies!

However, this breed can easily get sunburned, and time spend outside should be limited and monitored in warmer climates.

Indoor activities and exercise such as indoor agility or obedience training are excellent forms of physical and mental exercise for this breed.

Due to their history of rat hunting, they make excellent barn hunting dogs. This is a canine sport which requires dogs to travel through a maze in order to find hidden rats in the arena.

American Hairless Terriers are incredibly intelligent dogs and love to please their owners.

Early socialization is always a good idea to help this Terrier adapt to being around people and other animals.

Obedience training is an excellent form of mental stimulation for the American Hairless dog and indoor agility or barn hunts can be used for exercise. 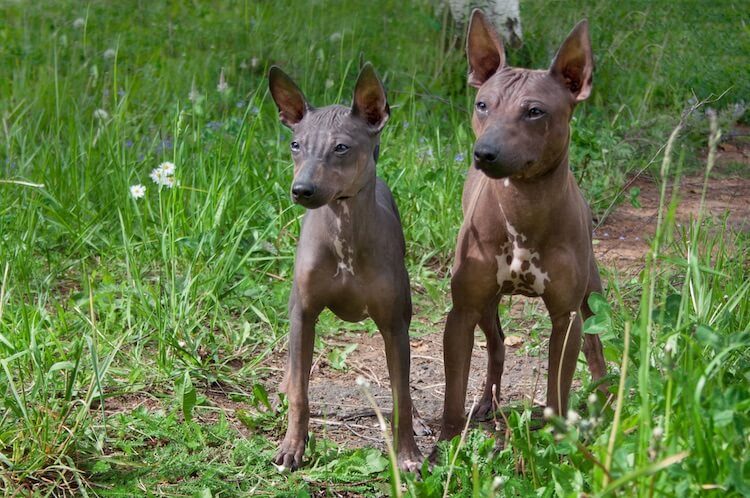 Due to their lack of fur, these dogs are susceptible to sunburn. Whilst this can be managed with the use of sunscreen and clothes made for dogs, it is advised not to own this breed in hot climates.

Additionally they may have health issues with:

This Hairless Terrier is best suited for families that have plenty of time to spend playing with, and training their dog, who live in mild climates.

They are extremely low maintenance when it comes to grooming and get along well with other dogs and children in the household.

He may not be the best fit for someone with small animals in the house due to his history of hunting rats.

Known for being affectionate canines who love to spend time playing and relaxing with their families and, because they are hairless, make perfect pets anyone with an allergy to dogs.

Do you think the American Hairless Terrier could be your new best friend? Let us know in the comments below!