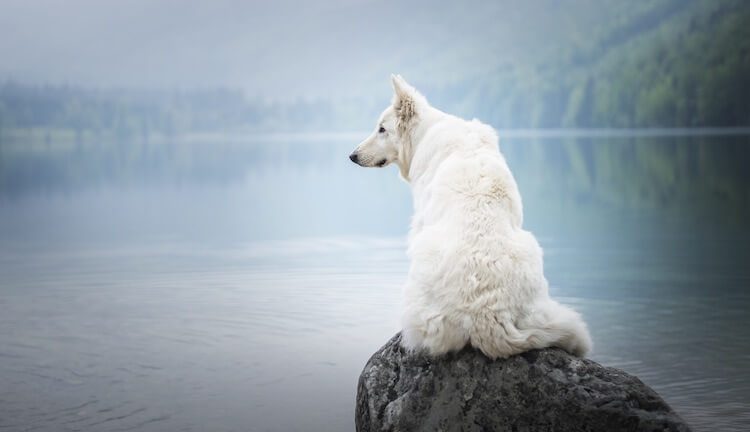 A French dog breed, the Berger Blanc Suisse (French for White Swiss Shepherd) is a cousin of the German Shepherd.

Their pure white coat gives them a ghostly appearance, however, this works to their advantage when guarding a flock of sheep in the Swiss mountains.

This breed often gets confused with the White Shepherd (its American and Canadian predecessor), because they are effectively the same dog breeds (just from different regions of the world).

Just like their German cousins, this canine has a high affinity to people, training, and working to please their owners.

Is this snow white flock guardian dog right for you, keep on reading to find out! 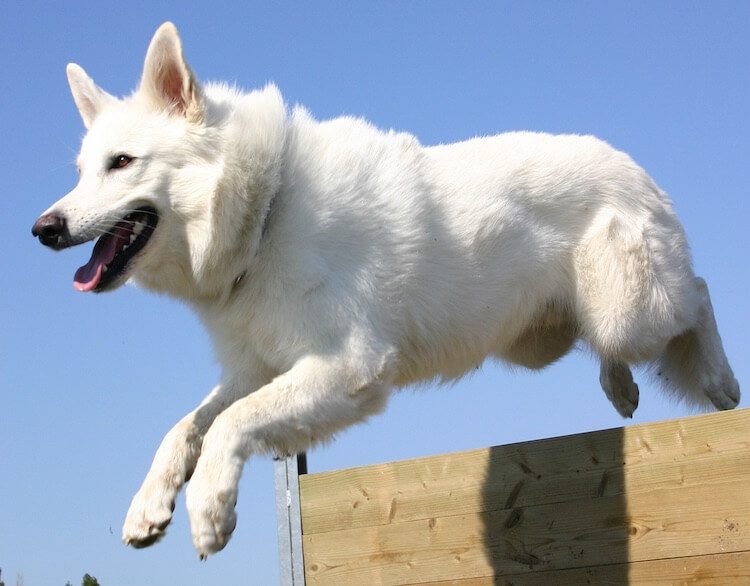 The White Swiss Shepherd has a very little documented history because of the overwhelming popularity of the breed’s cousin; the German Shepherd (which was first registered in 1899).

There were a few documented cases of this breed during the 19th century, however, they were almost extinct due to the incorrect assumption the Berger Blanc Suisse diluted the favored dark coloring of the German Shepherds’ gene pool.

From the 19th century, the history on this breed went silent, but their German Shepherd cousin went on to be recognized by the American Kennel Club in 1908.

However, the German Shepherd too almost went extinct during the World Wars because of their association to Germany.

It was not until the 1970s, where the White Shepherd club was founded in America.

At the same time, the White Swiss Shepherd popped up all over Europe until it was recognized as an official breed by Switzerland in 1991 and the Netherlands in 1992.

All three dogs (American White Shepherd, Berger Blanc and the German Shepherd) are classified in the Herding group by the American Kennel Club.

Just like their German cousin, this canine was used for herding cattle and sheep.

However, this furry friend was not bred to be a guard or police dog, so they have a calmer, more relaxed temperament when compared to the alert, aggressive nature of the German Shepherd.

Berger Blanc Suisse puppies will cost you a lot of money because the majority of breeders in the United States import dogs from European lineages.

Each puppy can range from $3,000 to $4,000 USD based on their parents pedigree, show champion status or working lineage.

Large dogs are always slower to mature than smaller breeds and this guy is no exception.

Females will mature faster than the males, however it will take them between two to three years to reach full mental and physical maturity.

By eight weeks, a White Swiss Shepherd puppy should weigh between 9 and 15 pounds:

It can be hard to find a rescue organization that specifically focuses on the White Shepherd due to them being easily confused with the White German Shepherd.

However, there are shelters that keep this breed’s lineage alive and healthy across the United States and Europe:

While this breed was bred to be a herding dog, they have a calmer demeanor than their Germain Shepherd cousins.

This is because they were not bred for guarding or police work.

They are protective, and loyal to their family, but they have no issue getting along with other people and animals.

Because of their herding background, the Berger Blanc Suisse is an active pooch who prefers to have a job to do.

Whilst not every dog lives on a farm, or near one, they are great at agility courses, obedience shows, and many other dog sports.

The Berger Blanc Suisse can be protective of their family, just like they would be for their flock of sheep or cattle, but they lack the more alert and dominant temperament that dogs working with the police or military.

Their loyalty is unshakable, and they will stand by their owners if they feel there is something wrong, protecting them when needed.

This breed does have a high level of energy, that can be translated into barking when excited or frustrated.

Training is important because you want to redirect that pent-up energy to desired behaviors (e.g. grabbing a toy) to avoid any damage to furniture.

An active family is best for this breed because they need long walks and intense play sessions to combat boredom and gaining unnecessary weight.

They are known to be very gentle with children and protective of them the most because of their ingrained herding temperament.

However, without proper training, those herding instincts can become an issue when the dog nips at the back of your kids’ heels.

Rest assured, they are not doing it to be mean or aggressive!

Nipping the heels of the animals that the dog is herding is completely natural behavior, it gets the flock moving where they are needed.

Getting along with other animals should not be an issue with this breed; socialization at an early age is better to get the best results to not fear people or animals. 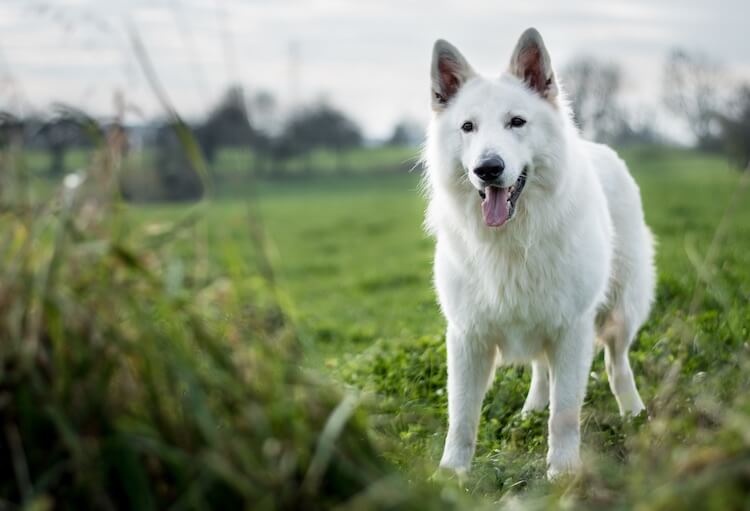 This White Shepherd is essentially a pure white version of the German Shepherd.

They have a muscular build with strong legs which help to keep them going for hours on end! Their ears stand up straight and this breed has a long tapered tail.

The breed standard states that a Berger Blanc Suisse should have a long rectangular shape and harmonious outline when they are judged at shows.

This large White Shepherd is considered to be a large dog breed:

This breed only has one color, white! However, their mouth, paw pads, nails, and nose are all pigmented black.

This dog has a thick double coat to protect them from the elements as they were bred to herd sheep in the cold and snowy Swiss mountains.

Depending on their working lineage, some White Shepherds can have a long coat or a dense medium coat.

For grooming this breed, you can follow the same rules as a German Shepherd.

They can shed quite a lot, so definitely aren’t hypoallergenic, but brushing with a de-shedder at least once a week can prevent too much hair build up.

The white fur can also be prone to staining, so professional groomers with safe shampoos are recommended if your dog’s coat is looking a little dull. 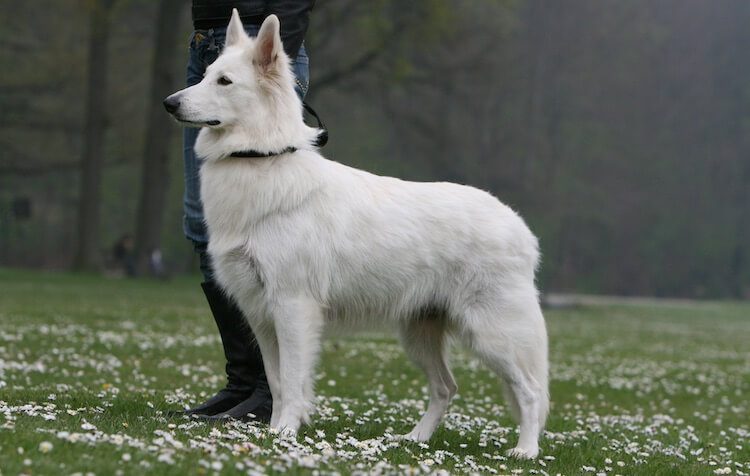 A herding dog is in need of a strong, experienced owner because their herding behaviors and temperament can come off as aggression to people who are not familiar with them.

The White Swiss Shepherd is no exception (especially since they are a large breed).

Grooming is a big factor in the care of this breed; as a white coat easily collect dirt and grime.

The high activity of this dog lends itself to burning a lot of calories during play time or working (e.g. herding livestock).

If they are a working dog, they would have to be fed more per day to keep them full and healthy to continue doing their job.

A more sedentary Berger Blanc Suisse still eats a large amount, due to being a large breed (but much less relative to a working dog).

Make sure to consult your vet about your dog’s exercise levels and diet to feed them the best diet possible.

Large dogs should be fed twice a day: morning and evening.

However, some breeds are notoriously fast eaters, this can cause your Berger Blanc Suisse to choke or develop bloat (because the dog is taking in so much air with each bite).

There are a lot of ways to slow down a fast eater, such as puzzle games or bowls specifically designed to combat the issue.

Exercising your Berger Blanc Suisse is crucial for a happy and healthy dog.

Long walks, or runs of two to three miles everyday, are the minimum requirements to keep the high energy of the dog from becoming an issue within your home.

Due to their herding background, the White Swiss Shepherd needs a job, they will also excel in activities such as agility or obedience.

A perfect game to play with them is Treiball, otherwise known as dog soccer.

The object of the game is to direct your dog, especially a herding dog, to corral a bunch of blow-up fitness balls into a goal.

It satisfies the ever present desire to herd whilst teaching them to listen to commands from owners at a distance.

Off leash walking can be achieved with this breed; they are extremely loyal to their owners and a little training can go a long way to teach them to remain at your side despite distractions. 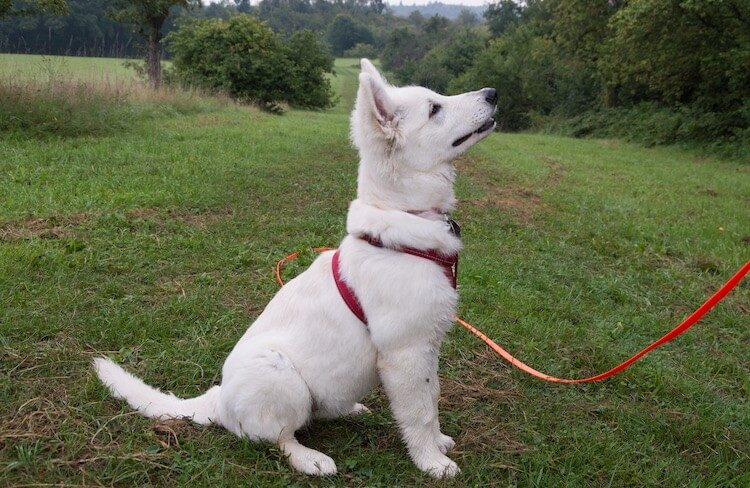 The Berger Blanc Suisse is an extremely intelligent pet that needs a strong leader that can show them what is desired behavior.

Positive reinforcement, with a special toy, works best with this breed coupled with frequent training sessions after play time to temper their energy.

If left alone for too long without getting their energy out, the White Swiss Shepherd can fall victim to boredom.

A bored dog can act out by excessively barking, or destroying things within the house. A smart dog can also be worse because they might know how to open cabinets or doors.

Like any flock guardian or herding dog, they need to be socialized with a variety of: people, animals, and situations.

This helps them to avoid becoming fearful or aggressive in unknown or new situations.

Known for a more relaxed temperament,. it is still necessary to begin socialization at an early age to avoid issues with your Berger Blanc Suisse puppy.

There are not any breed specific illnesses associated with this dog breed, however large dogs in general have a few known issues:

The Berger Blanc Suisse is a large, powerful herding breed that enjoys having a job to do, whether that is actually herding sheep or learning a new agility course.

This breed needs an owner that will put in the effort of training and spending time with them because of their intelligent, loyal nature.

They love to run, play, and spend hours of quality time with their family, especially with children.

With enough love and patience, this white dog can bring a world of joy to you. What do you think?