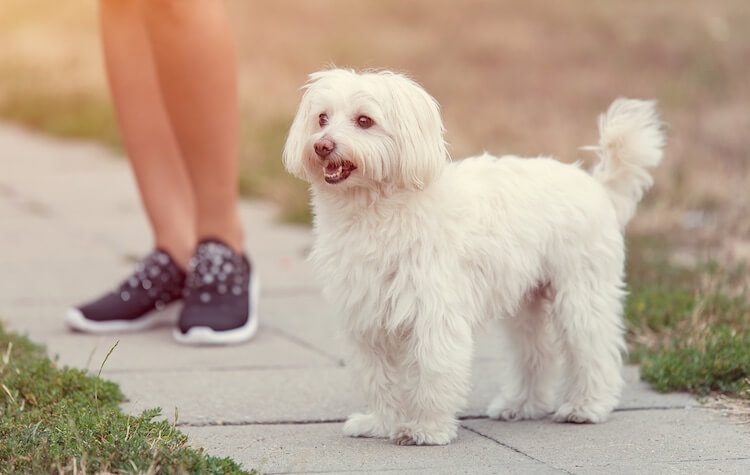 Originally from Bolognese (in Italy) this small and playful dog was bred as a status symbol in the 11th and 12th centuries.

The charming Bolognese Dog, often referred to as a Bichon Bolognese, was often gifted to nobles in Italy and Rome as a symbol of a person’s wealth.

These dogs stand about a foot tall to their withers and weigh between 5 to 11 pounds.

They can easily be identified by their long, fluffy white coat.

Known to be very calm, and inactive, but they love to play sometimes and spend time with their owners.

Typically better suited for seniors, or families with older children who have plenty of time to spend with their dog.

Keep on reading to find out everything about this breed.

These charming dogs were originally bred to be given as gifts to wealthy families in Rome and Italy. The Bolognese Dog is known for being exceptional companion dogs and having a very calm temperament.

Originally bred in 11th and 12th century in a small town in Italy, this famous breed was a favorite among wealthy renaissance families (especially in Brussels).

However, during the decline of the renaissance period, this lovable canine almost went extinct.

The Bolognese Dog was revived by an Italian breeder who had fallen in love with the breed and was first shown in the U.S. in 2001 (this breed was first eligible for AKC shows in 2008).

This dog is recognized by the Foundation Stock Service Program for being a rare dog.

The Bolognese Dog was originally known as the Melitensis which is believed to be the origin of the Bichon group including:

Although the Bolognese Dog wasn’t first shown in the United States until 2008, they are recognized by multiple kennel clubs.

The most common clubs that recognize this breed are:

While these dogs are recognized by most official clubs, they may not be recognized by clubs that focus on breeds other than toy and companion dogs (e.g. working breed kennel clubs).

The Bolognese Dog is considered a rare breed despite being related to more common dogs such as the Maltese.

Finding a purebred breeder may be difficult in the United States, although they are more popular in Italy and Europe.

Because of this the American Bolognese Club and the AKC marketplace are the most reliable source to adopt a healthy and purebred canine.

This rare puppy can weigh as little as three pounds when you first meet him, but don’t let his small size fool you; they can have a huge personality.

Bolognese dams may have a litter with anywhere between three and seven puppies (three or four is most common).

The small litter size, coupled with the rarity of this dog, contribute to the expensive price.

This breed is also not a hybrid designer dog, meaning that both parents must be purebred Bolognese canines.

They tend to hit a growth spurt between the ages of three and six months. After sixth months, their growth slows down until they reach their maximum weight of between ten to eleven pounds.

When they are eight weeks old, a Bolognese puppy may weigh as little as two pounds. But, regardless of their small size, this breed has a lot of love to share. 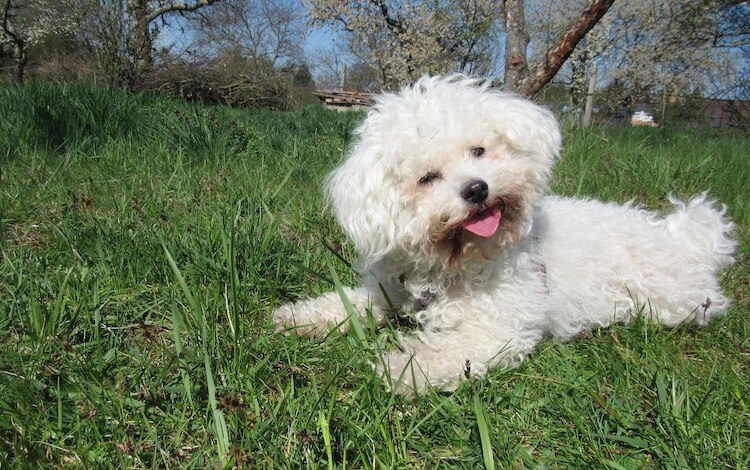 This breed is very dependent on their owner and are known to suffer with episodes of separation anxiety when left alone for long periods of time.

As with all dogs suffering from separation anxiety, this may lead to destructive behavior and may cause a strain in the dog-owner relationship.

The Bolognese Dog is not known to bark very often, at least not more often than most toy breeds.

However, if left alone for extended periods of time they may start to get yappy or howl until someone comes home.

They typically have a low prey drive and are more focused on their families than their surroundings.

Similar to a lot of toy breeds, they may also suffer with “little dog syndrome” when they may bark at strangers; this behavior can easily be trained out, especially if you start when the dog is still a puppy.

Despite this they are not known to be aggressive and are typically nervous around strangers (but warm up very quickly).

The Bolognese Dog is a generally claim breed that occasionally has short bursts of energy or “zoomies”.

They are known for being very playful, loving, and faithful to their owners.

Unless they are socialized at a young age, this dog may be skeptical and shy around new people and larger animals; especially in a busier household.

However, if correctly introduced to strangers and other animals, they should be perfectly fine.

This breed is best suited for seniors or families with older or no children.

The Bolognese Dog does not do well with younger children because they may irritate them or give them anxiety which may cause the dog to react negatively or bite at younger children.

If introduced slowly and correctly, this breed can get along very well with other dogs, cats, and people.

A family that is not very active and isn’t away from the home for long periods of time would be ideal for a Bolognese.

This small and stocky dog is known for its square body-shape.

According to the breed standard for the Bolognese dog:

Although they are pure white, they have dark black eyes and a black nose.

They have long and wavy hair that is typically left untrimmed except for around the eyes and occasionally the mouth.

Male Bolognese dogs can weigh between 5 to 11 pounds while females weigh slightly less between 5 to 9 pounds.

They belong to the toy group and both genders stand between 10-12 inches tall at the withers.

Like most breeds, the females tend to be a little bit lighter than males but they are typically the same height regardless of gender.

The purebred Bolognese must be pure white or light ivory without any spots or dark patches.

According to the breed standard, they must have completely black noses and dark eyes. 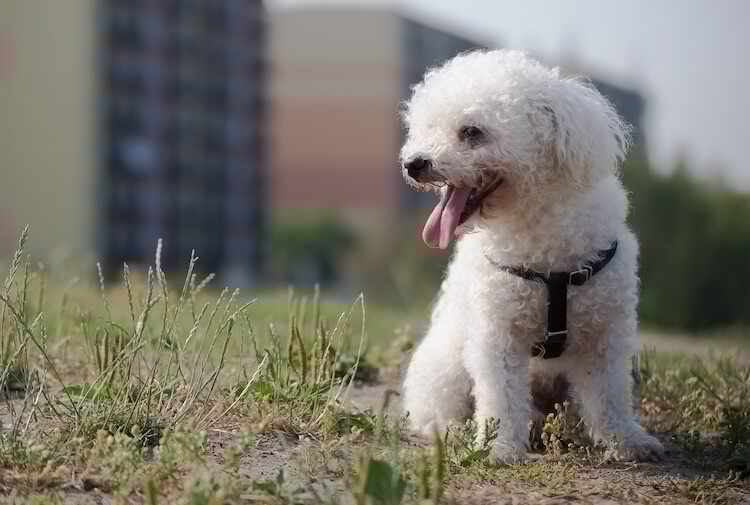 This breed is known for having a longer wavy coat that has a soft, cotton feeling.

Although this pooch does not have a double coat, they do have a lot of fur which may be mistaken as a double coat.

Their hair is very thin but has a cotton-like texture.

Is The Bolognese Dog Hypoallergenic?

Yes, they are considered a non-shedding breed and are ideal for anyone looking to own a small hypoallergenic dog breed.

Because they have a lot of hair, they should be brushed every day, or at the very least four times a week.

Most owners prefer not to get their dog groomed or clipped, instead letting their hair grow out.

Grooming mostly consists of bathing and brushing their coat.

Some owners choose to trim the hair around the mouth and eyes for sanitary reasons, but this isn’t a requirement. 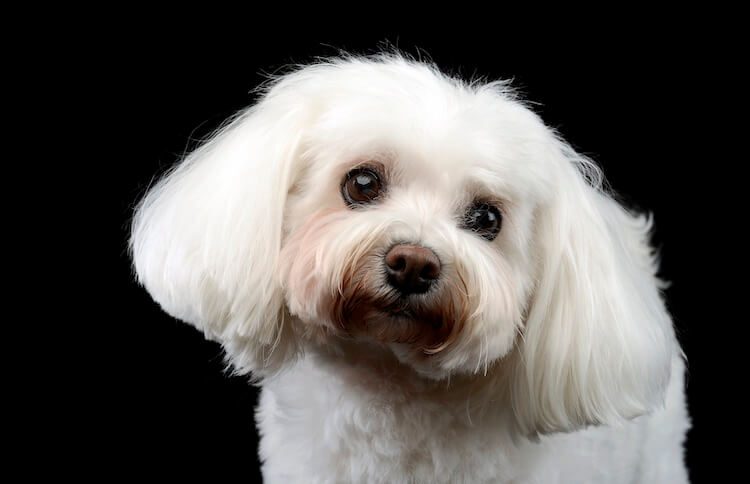 This breed is relatively easy to care for (as far as exercise goes), but, when it comes to grooming, this breed is best suited for an adult who has experience owning and grooming dogs.

The Bolognese dog should be fed a quarter of a cup of food (twice every day) and requires a daily calorie intake of around 220.

This breed does well on a high-quality diet; if feeding a manufactured diet dry food would be the best choice but wet food is acceptable too.

If you choose to feed a manufactured diet, make sure you feed your dog a kibble with a protein percentage between 14%-21%.

Some owners may prefer to feed their dogs raw diets prepared at home.

A raw diet, consisting of a high protein meats and fish, would be an excellent choice; however it is always a good idea to talk to your vet before starting a raw diet.

Due to its small size and calm nature, the Bolognese Dog doesn’t require very much exercise.

These little pooches require about an hour of exercise every day. Two short 20 minute walks, plus some playtime throughout the day, is a perfect amount of exercise for this breed.

They enjoy walking with their owners and are safe to walk off leash because they have a tendency to stay close, but always make sure your dog is trained to stay by your side before attempting to walk them without a leash.

Also, make sure to always check your local leash laws before walking without a leash.

Generally a very easy dog to train, the Bolognese Dog can sometimes be stubborn and require a lot of patience.

They are known to be very social with other animals and people as long as they are introduced slowly and in a safe, comfortable environment.

This little dog responds very well to positive reinforcement and is typically very eager to please their trainer.

Basic or competitive obedience is the best form of training for this breed because it requires more mental exercise for this calm dog than physical.

Purebred Bolognese dogs are known for being very healthy pets, but like any other breed, they do have their share of health problems and illnesses.

Luckily for owners of this breed, genetic testing to scan for health problems can be done early on, and if the parents of a puppy do not have a history of health problems it is very unlikely that their puppy will either.

This adorable breed is best suited for families with older children, and a calmer, more relaxed lifestyle.

Families who work a 9-5 job, or who are not home very often, would not be ideal for this breed due to its intense separation anxiety.

The Bolognese dog is relaxed, loving, and very eager to please the people they love.

They enjoy spending time with their family by taking short walks or having play time and are generally very easy to socialize with both animals and people.

These small silky white puppies love people and spending time with their families.

Do you think one of these lovable canines would be a perfect fit for your family? Let us know in the comments!