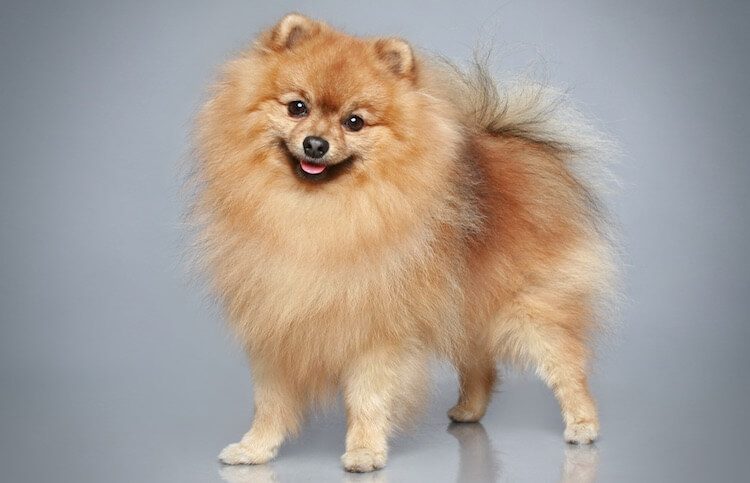 The German Spitz, although very similar in appearance to a Pomeranian, is a unique breed originating from Germany.

There are different size classifications of Spitz dogs, depending on where you live:

This breed is known for their beautiful medium-long coat, a fox-like head and curled tail.

They also come in multiple color varieties (the famous of which is orange), and have small, sturdy, spunky bodies that the public love.

The German Spitz is also known for being affectionate with their family and high energy, making them an ideal match for an active family!

Keep reading to see if this tiny, ancient breed could be the one for you and your family. 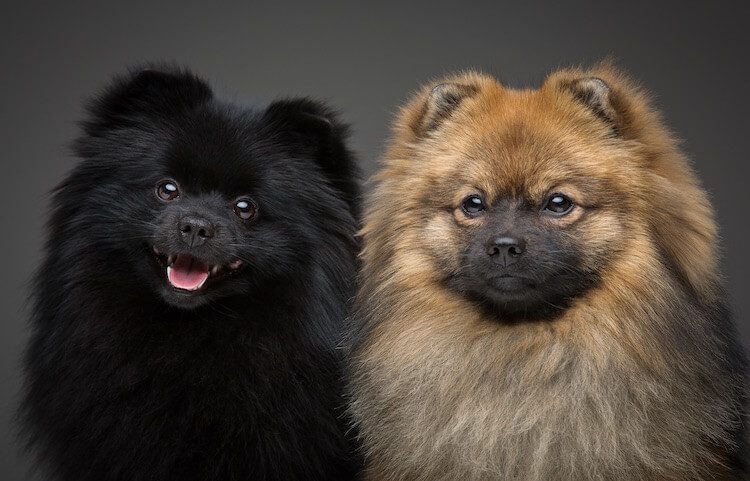 A highly energetic breed, which loves to play, this breed is a great match for an active family.

This canine is now used now for companionship, and are considered non-sporting, although they were previously used for hunting and as guard dogs.

The German Spitz originated during the Stone Age, in an area that was once called Pomerania, but today is somewhere in between Germany and Poland.

With traces of these dogs dating back to 1450, they were originally bred to be guardian and hunting dogs, but as time moved on, they became a favored companion to royal families during the 18th century.

The Spitz remained very popular during 19th century, however, interest saw a sharp decline during World War I, as did almost every other dog breed of German ancestry.

The popularity of this breed surged across Europe in the 1970s, however, they are still not very popular in the United States.

In Europe, this breed has been recognized by the United Kennel Club since 2006; this organization recognizes this breed in two sizes: klein and mittel.

There is also an American German Spitz Club that support the healthy and responsible breeding of this dog.

As with most smaller dogs, this dog has very few puppies in each litter, the average being somewhere between 1 and 5 puppies.

A German Spitz puppy from a reputable breeder will cost anywhere between $400 to $700 USD, which is not as expensive as many of its counterpart Spitz breeds.

This breed will continue growing until they reach about 14 to 16 months of age for males and 12 to 14 months for females.

This dog is known specifically for being a great watch dog, and for being a high energy and playful breed.

Because they were historically used as guard dogs, they have a specific bark which can develop when they are bored or when they see something new; this can become a nuisance so is something to consider before adopting.

To avoid this, it is important to make sure you socialize your dog, and have plenty of spare time to train, play with and keep your dog mentally stimulated.

Along with their tendency to bark frequently, they also have a very high prey drive. The German Spitz was used for hunting, and has a high tendency to bolt after smaller animals.

Despite all of this, early training can help to control these behaviors before they become too much of an issue when they are an adult.

The German Spitz is a very protective animal, but is not known to be aggressive toward people.

They are a playful, energetic animal, who can be independent if necessary.

This independence makes them much less likely to develop separation anxiety, and this makes them suitable for someone working occasional longer days.

The German Spitz is also highly intelligent, but if training is not lively and entertaining they can become stubborn too.

These dogs make an amazing family companion, as they are fiercely loyal and protective.

Thankfully, with early introductions and supervision, the German Spitz can be a wonderful addition to any family, especially one with kids.

Because they have a very high prey drive, this breed is not well suited for a home with smaller animals, such as birds, guinea pigs and other small rodents.

They can coexist with cats, but this is easier when they are raised together.

As far as other dogs, slowly introduce the pair, especially if the other dog is bigger than your Spitz, to avoid any aggressive confrontation.

As they were previously used for hunting and farm guardianship, this breed is not fragile like other small dogs.

They are known for their fox-like head, small pointed ears, and unique coats.

This breed can be distinguished from the Pomeranian and other similar breeds by their size, as they grow significantly larger.

The most popular size is klein (small), followed by the mittel Spitz (medium):

These dogs are considered non-sporting, and a small to medium breed, depending on the variant you choose.

The German Spitz comes in a variety of colors and combinations including:

This breed can also come in a variety of markings, such as parti-color and sable.

Known for their unique coat, this dog has a beautiful, silky, medium to long coat.

Their fur is also straight and very dense, making them suited to a family in a cooler climate, or an air conditioned life-style as they can easily overheat.

The German Spitz is also known for the fluffy “collar” of fur they have around their necks, this being known as a “ruff,” and their curled tails.

They will shed majorly at least twice a year to get rid of their dead undercoats, but they do not shed continuously throughout the year. 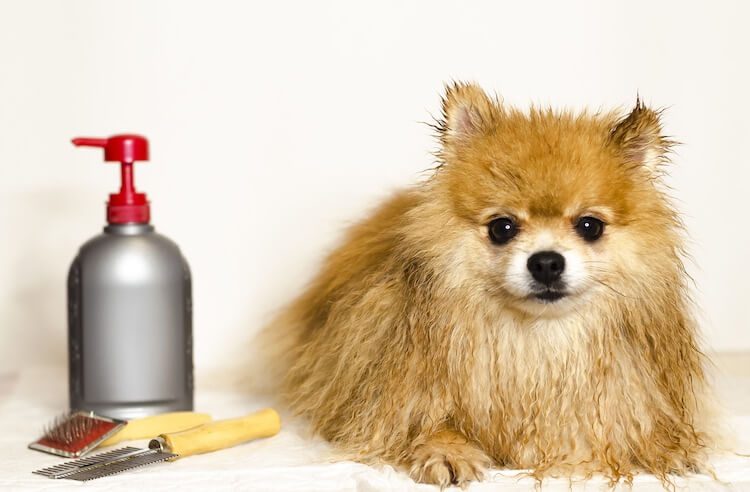 Due to their undercoats being so dense, grooming your Spitz is necessary.

They should be brushed several times a week in order to keep debris, dirt, and loose, dead fur out of their coats.

A lint roller is also recommended for your clothes and furniture, because the hair they shed becomes very clingy.

They do not need to be bathed often, as regular brushing can keep dirt and mats from collecting.

Like any other breed, this dog should also have regular teeth brushings to keep them in good oral health. 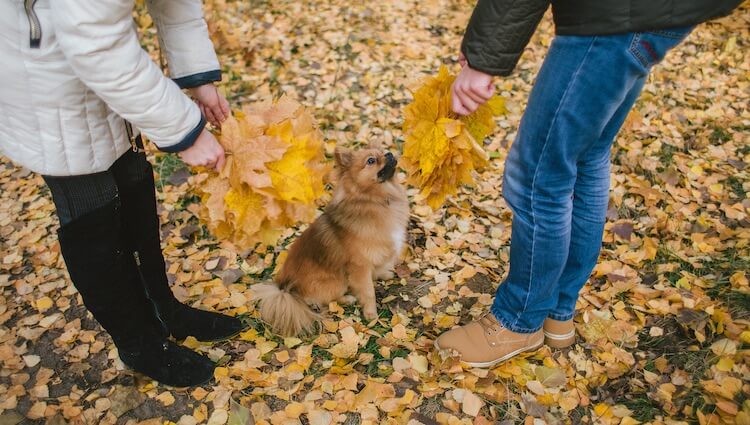 The German Spitz is a very versatile breed, they can live in most home environments (e.g. apartments, farm yards and family homes).

With that being said, it is important for your canine to be kept out of harsh, warmer climates, due to their dense double coat.

They are also not suited for households with any animals smaller than a cat, as they have a very high prey drive.

The German Spitz should be fed a kibble diet formulated specifically for smaller dogs with high energy.

This will give them enough calories to play without giving them too much to become overweight.

They have a tendency for weight gain, so it is very important to stick to a consistent feeding schedule.

Treats should also be limited, as this adds extra calories to the diet that owners sometimes do not take into consideration.

As with every dog breed, it is also important to transition your canine from puppy food, to adult food, to senior food.

Whilst it’s true this breed is high energy, they are small too, so they don’t need long extended walks.

Two brisk 20 minute walks each day is plenty and a fenced backyard for supervised play times would be perfect for this breed.

Off leash walking is not recommended, because they are very curious animals with a high prey drive, and this can get them in a lot of trouble.

They should also be supervised around larger bodies of water, or ponds in the nearby area. 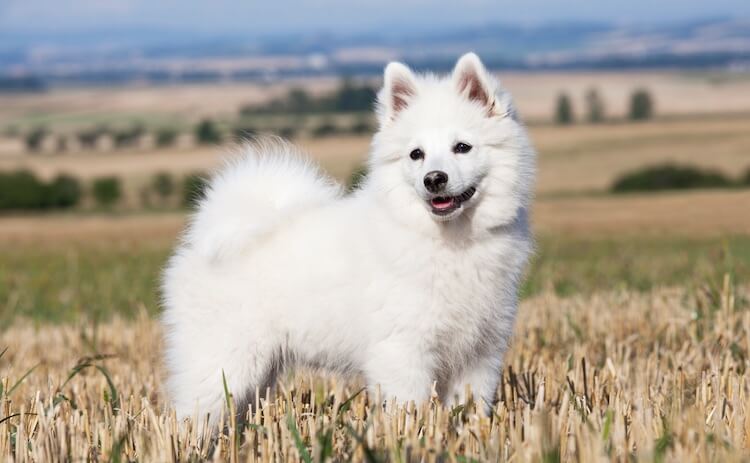 The German Spitz is an extremely intelligent breed, however, due to this intelligence they need to be engaged and interested in order to not become stubborn.

When properly motivated and engaged, they can be very eager to please.

Something which needs to be completed early with this breed is socialization, as they can have a tendency to become shy and weary of strangers without this.

With early and regular training, this dog can become a very well-behaved, eager to please, and sociable.

Like most small dog breeds, the German Spitz can live a very long and happy life of up to 16 years!

However, they are prone to some health conditions. Epilepsy is one major health risk of this breed which causes regular seizures.

Along with this, this dog can be prone to luxating patellas and several eye problems including: retinal dysplasia and progressive retinal atrophy.

Knowing the health and genetic history of the parents of your dog is also very important, which is why a reputable breeder is necessary. 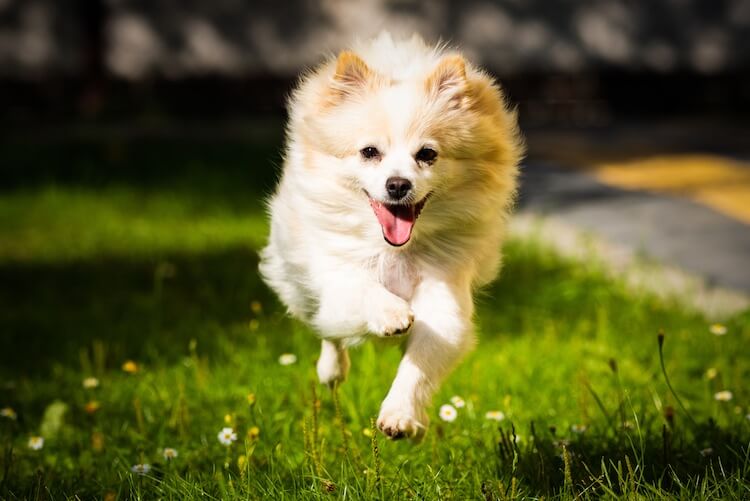 This dog is a bright and energetic breed, known for their high prey drive and excellent watchdog ability.

It should be noted, they not do well a family with small pets, due to their prey drive.

They are also known for their tiny, foxlike appearance and a thick luxurious coat.

Known for being able to adapt well to almost any living environment, as they do not need constant attention like other breeds and are a bit more independent.

The German Spitz is fiercely loyal and intelligent, with a small, sturdy body, and will be an active, playful companion for you and your family to spoil!