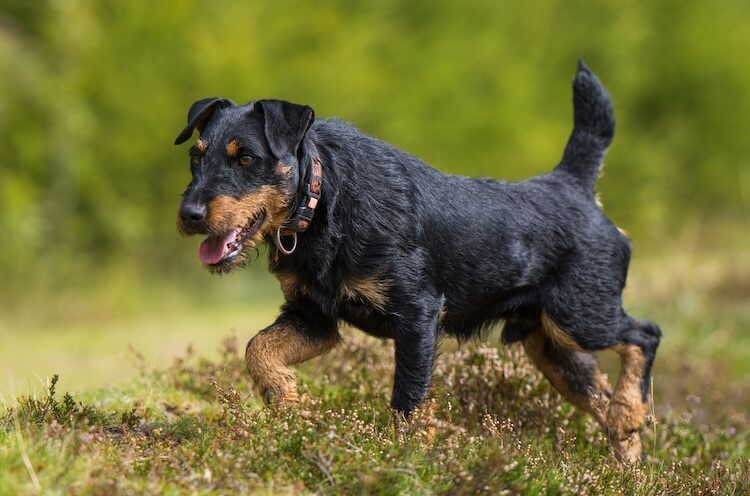 The Jagdterrier is a modern German dog breed, born to be an amazingly fierce hunter and they are renowned for their intelligence and confidence.

They were bred to be able to flush out prey for their owner and to be determined to make the catch.

Along with hunting, this dog is known for their affectionate attitude and their willingness to please their owner; this makes them incredibly easy to train.

They are best suited for someone with an outdoor lifestyle so that they can burn their energy and have a job!

If you’re looking for a terrier that loves to run and chase, with lots of energy, then continue reading, as this might be the dog for you.

The Jagdterrier is an intelligent terrier breed that has origins stemming from that of Fox Terriers, Welsh Terriers, and Wirehaired Terriers.

Their primary uses today are still for hunting, but they have also been used for guarding as well as being a companion breed.

Because of their hunting pedigree, this dog is perfect for someone with an active lifestyle, or an active family.

This canine is actually a very recent dog breed, the breeding process only began in the early 1900s.

At the end of World War I in Germany, a group of hunters separated from the Fox-Terrier club and wanted to create a breed with a very high hunting performance.

Three men decided they wanted their new breed to be black and tan with a knack for hunting underground:

They enlisted the help of Lutz Heck, a zoo director, and he gave Zangenberg four black and tan Fox-Terriers, and these became the foundation stock.

Following this, they crossed these animals with the Wirehaired Terrier and the Welsh Terrier to create the Jagdterrier dog breed.

This dog did not begin to gain popularity in the United States until after 1950, when they began to be recognized for their hunting versatility.

After their hunting notoriety, they quickly became the primary choice for boar hunters in Florida, Texas, and Louisiana.

Due to how recently the Jagdterrier was bred, they have yet to be recognized by the American Kennel Club, however, their popularity in America continues to climb and they are not far from earning a purebred title.

They are on the Foundation Stock Service registry, which is one of the first steps in becoming recognized by the American Kennel Club.

Along with the Foundation Stock Service, the Jagdterrier is also recognized by: 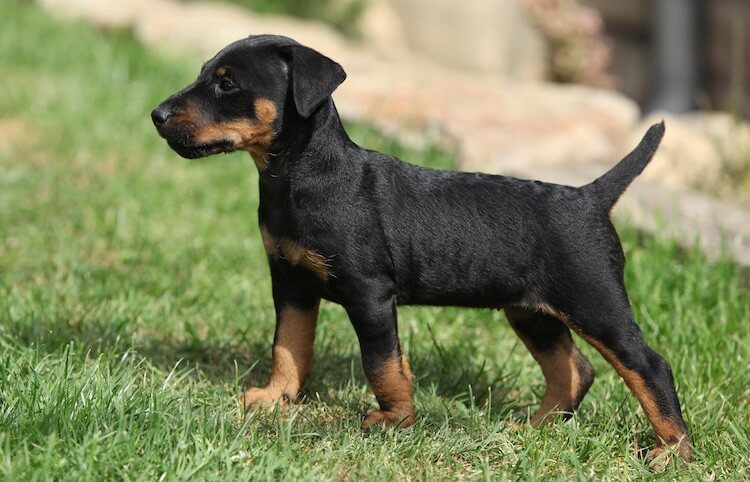 Since this dog breed is not officialy recognized by the two major kennel clubs yet (e.g. American Kennel Club & the UK Kennel Club) they are not a purebred dog.

Because of this, and their breed recency, Jagdterrier puppies only cost around between $300 to $500 USD.

The average litter size of terriers is larger than most smaller breeds, with a typical litter size being 2 to 5 puppies.

These little puppies can be extremely energetic, wild, and full of life! This makes early socialization training extremely important. 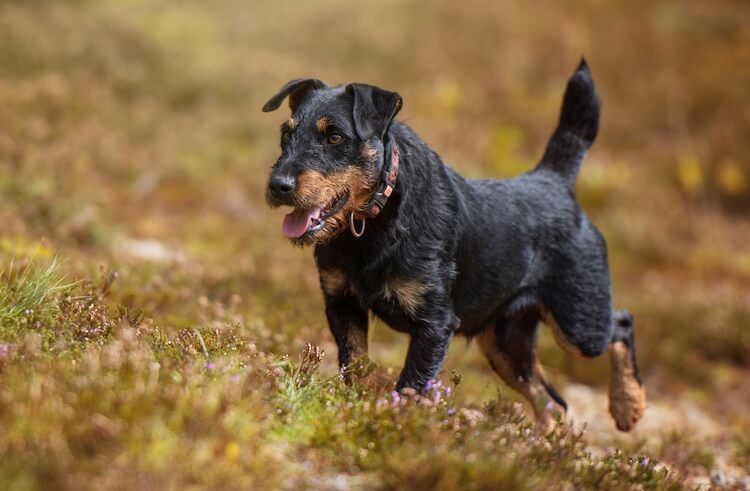 The first few words that come to mind when talking about the Jagdterrier are: courageous and fearless.

Because they are incredible hunters, this ability causes them to have an extremely high prey drive.

When combined with their extremely high energy levels, this makes it hard for them to be an apartment dog, as they need to have somewhere to run and play.

A fenced in backyard would be perfect for this terrier, or a rural farmhouse, especially with some kids to run around with!

Unlike most terriers, this dog is not known for barking and they do not howler either.

Except for prey that they are chasing, they are also not known to be aggressive.

One of the few undesirable Jagdterrier temperament traits is their determination.

If they are determined to get into trouble because they’re bored, they will, so make sure to keep their minds and bodies stimulated.

The Jagdterrier is smart, high energy, and just a ball of fun!

They love their owners and are extremely loyal.

Along with this intelligence, they are easy to train because of their eagerness to please, and if introduced early enough, they can be raised in a household with other dogs.

However, it is not recommended for them to be somewhere where they can get into trouble, because they are also known for their determination and they will find something to do whether or not it is constructive!

They love having a job, and thrive in a hunting or working environment.

As they are extremely affectionate and loyal animals, the Jagdterrier is known for being a good family companion.

If we haven’t emphasized it enough, these puppies need exercise, exercise and EXERCISE!

Having children as a companion would be great for this dog, however younger, very small kids, have the potential to set off the prey drive in this pet.

So it is important for your kids to be mature enough for this dog, as when you get your Jagdterrier you need your children and puppy to both stay safe.

As far as having other pets or dogs in the house, the Jagdterrier is not known for doing well in multi-pet households if the other animal was already present in the household.

If you would like more than one dog, it is important to get them around the same time so that they can grow up and bond together.

We would also suggest not getting any kind of small animal (e.g. cat, hamster or guinea pig) due to the prey instinct that these terriers possess. 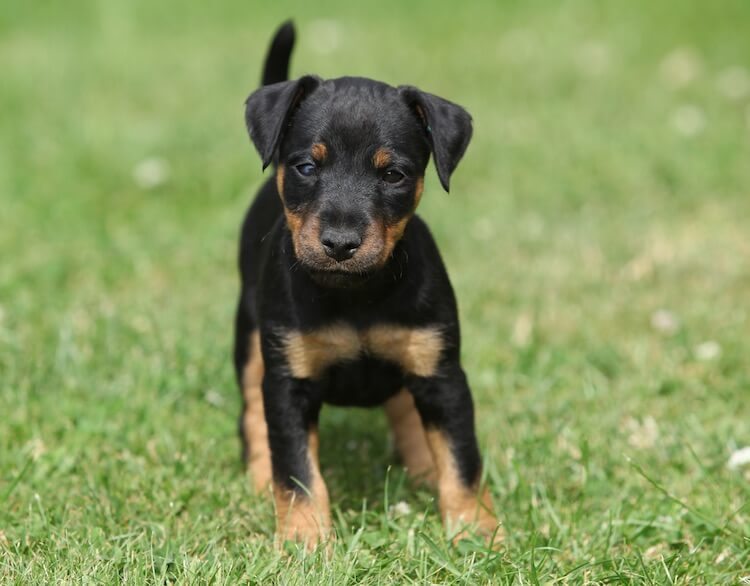 They are known for their small, compact, and proportioned body that allows for them to be able to flush out prey animals for their owners.

According to their breed standard, they should also have a pointed docked tail and bent, but not floppy, ears.

Even though the Jagdterrier is a small dog breed, they are still powerful little pets!

If you are interested in adopting this breed, they should grow to be somewhere between 13 to 16 inches tall (to the shoulders) and weigh anywhere between 17 to 22 pounds.

The Jagdterrier can come in three color varieties, these being: black, black and gray, and dark brown. 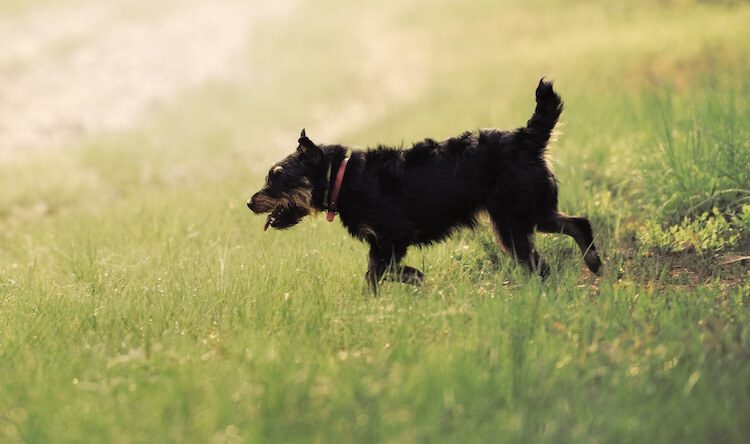 The Jagdterrier, no matter the coat color, will always have a very dense coat.

Like other hunting terriers, this breed is known to have three registered coat types, these include:

A broken coat is a mixture of both a smooth and rough coat, where the rough pieces are around the face, legs, or on the underneath of the abdomen.

The textured thick coat is made to protect this dog as they run through densely wooded areas on hunts. This is where the broken coat comes into play (being the best of both worlds).

This hunting dog may need the occasional bath and brush to look his best, but other than that this dog is very easy to keep groomed.

They do, however, have fast growing nails, and these need to be trimmed regularly.

Without regular trimming, these nails can become overgrown, or begin to crack or split, which can be painful.

Since the Jagdterrier has floppy ears, they also need to be checked regularly for wax or debris buildup, as this can cause infections (if they aren’t kept clean).

Finally, as with all dogs, their teeth should be brushed regularly, or substituted with dental chews, to keep them from having any oral health problems. 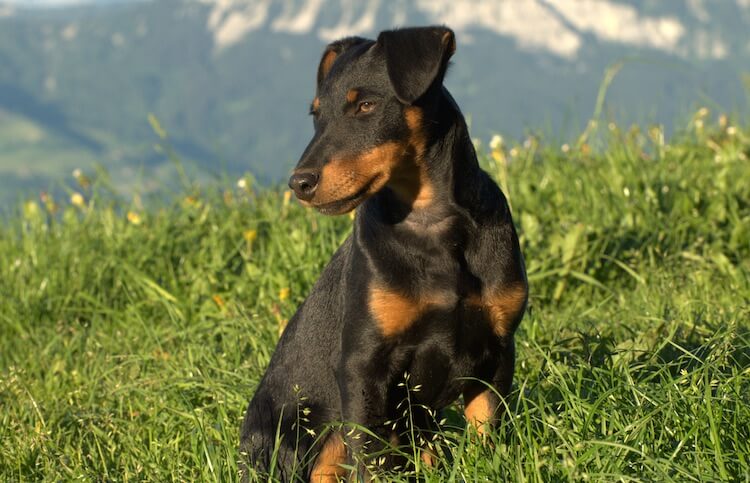 This dog is an extremely easy breed to care for!

They require minimal grooming (as discussed above) and they can be given most dog food types (e.g. wet, raw or dry), as long as it’s high quality.

However, they don’t suit every type of owner, and do best with someone that has a more active lifestyle, whether this be a family or a hunter.

This little guy does well on a high-quality dog food with plenty of natural animal protein.

Making sure to not overfeed your puppy is extremely important in allowing them to live a long and healthy life.

This also means to watch how many treats you are providing for them, as snacks do affect their caloric intake.

With any dog, it is also important to make sure that they are eating the correct food for their age range, as puppies need a different supply of nutrients than a senoir dog.

Finally, it is also very important when it comes to human food consumption, unless it consists of safe fruits and veggies to be limited, as this can cause a variety of health problems for your dog.

The Jagdterrier is a very high energy breed (as hunting and running was what they were bred and born to do)!

They need at least one hour of outdoor, quality exercising every day to keep them from becoming bored or destroying your household.

Because of this, they are the best suited for someone who has a more outdoor lifestyle.

However, this dog should not be walked off leash, because they have a very high prey drive due to their hunting instincts (this can cause them to bolt after small animals). 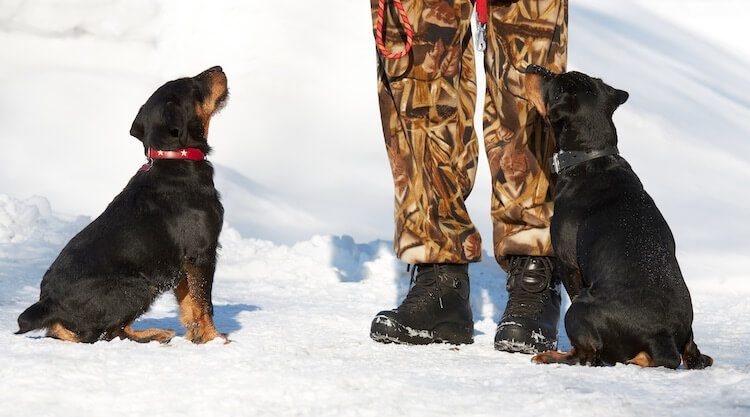 Known for their extreme amounts of intelligence, this can help to make training much quicker and easier.

They are known to thrive when they are given a job to complete, especially when it involves any kind of mental or physical stimulation.

Thankfully their intelligence does not cause them to become very stubborn, unlike other breeds, and because of this as long as you start early training (with the correct technique), it should be fairly simple.

The Jagdterrier was bred to be an extremely hardy little puppy, and this has allowed them to have a lifespan of between 12 to 14 years of age

Even though this is true, there are a few health problems that your terrier could be susceptible to.

The area that seems to cause the most trouble for the Jagdterrier is their eyes, they are known for being able to inherit a painful disease called primary lens luxation.

This condition can show up anywhere from 3 to 8 years into their life, and if left untreated, can cause blindness very rapidly.

Since this is an inherited condition, it is important for the breeder to be responsible and only use healthy breeding stock which is genetically tested to not carry this gene.

Other eye conditions which affect this terrier are cataracts and glaucoma.

Along with eye problems, the Jagdterrier can also have:

The Jadgterrier is best suited for someone who is extremely active, and loves the outdoors.

They also do well with owners who have families, especially those that have older kids that can be more aware around your dog.

Known for their intelligence, determination, bravery, confidence and prey drive, this can cause them to get into trouble with other smaller animals.

Finally, they are known for their very dense coat that is to protect them while running through dense foliage while hunting.

Does the Jagdterrier sound like the perfect energetic companion for you? Let us know in the comments.