The Japanese Spitz is one of the most recent dogs to be admitted to the American Kennel Club.

Not even 100 years old, and yet this intelligent and happy canine has been popular since day one.

Known by some as a Cloud Dog, because of their beautiful white appearance, this dog breed was first seen in 1920.

An ever-elusive dog, the general public really doesn’t know much about them, as they are often overshadowed by similar, and yet distinctly different Spitz dogs (i.e. Samoyeds).

To try and answer all your questions, here are 14 cute, interesting and little known facts about the Japanese Spitz…

1. The Japanese Spitz Is Known As The “Cloud Dog”

The Japanese Spitz is a small to medium white dog, developed to be a companion dog.

They are often called “Cloud Dogs”, due to their fluffy white appearance.

Despite this dog being present in America since around 1980, they are not registered by the American Kennel Club.

This is due to the Japanese Spitz’s close resemblance to the American Eskimo Dog, the Pomeranian and the Samoyed.

The AKC has instead admitted them to the their Foundation Stock Service (in April 2019), an optional registration service for purebred dogs that cannot be registered with the main purebred database.

They are also recognized by their own breed club known as the Japanese Spitz Club of USA. 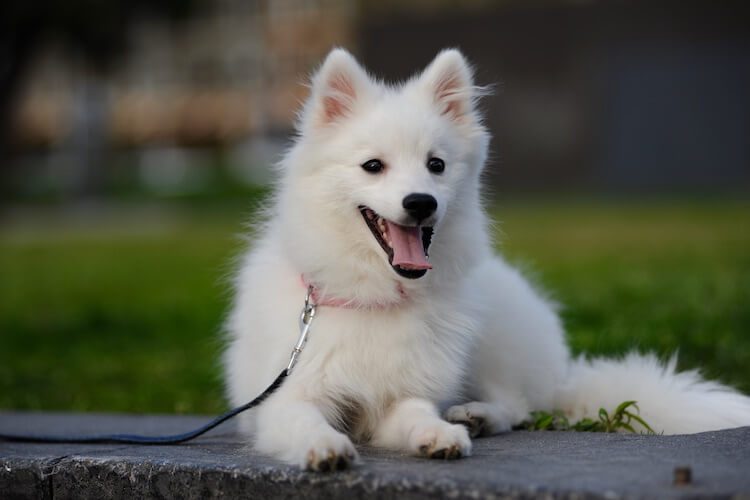 The Japanese Spitz was first seen in Japan during the 1920s and 30s.

Between 1921 and 1936 the breed was meticulously selected for, breeding in many kinds of Spitz dogs from around the world:

This dog is extremely sought after in Sweden for their stunning looks, cheerful personality and intelligence.

The final breed standard was written around 1945 and was accepted by the Japanese Kennel Club in 1948.

Since then, the breed standard remains unchanged and this dog’s popularity has spread globally.

They have a huge, white coat.

The breed standard set out by the Federation Cynologique Internationale describes the Japanese Spitz as a medium dog, with a wide pointed muzzle, triangular pricked ears, and a large, fluffy tail that curls over their back.

They also have a mane around their neck, giving them an almost lion like appearance.

The pure white double coat is the most obvious feature of this dog breed’s appearance.

Japanese Spitz usually stand between 12 to 15 inches tall and weigh between 10 and 25 lb.

However, the breed standard does vary somewhat between kennel clubs (we discuss this in more detail in fact #12).

4. This Dog Has Biannual Malting Seasons

This is a very fluffy dog with a thick coat.

You would be forgiven for thinking that owners spend all day brushing that gorgeous coat!

The reality is that the Japanese Spitz is actually a very low maintenance dog.

In order to stop their coat from becoming matted, it needs to be brushed one to three times per week. Using a pin brush allows the owner to get through their thick coats.

This will need to increase during malting season (which occurs twice per year) to daily brushes.

These dogs should not be bathed often due to their sensitive skin type. Overbathing will remove essential oils and dry out their skin.

Their coat doesn’t really retain the smell of dirt, so bathing a few times a year will be more than fine.

Typically, the Japanese Spitz Dog is very healthy and usually lives from 10 to 16 years old, making them one of the longest living dog breeds.

How Healthy Is This Dog?
This dog does suffer from health problems, the most common of which is Patellar Luxation.

Patellar Luxation is a minor dislocation of the knee joint.

This inevitably wears holes in knee cartilage, ultimately, this results in pain while walking, which depending on the severity of the condition can be managed via medication and/or surgery.

These Spitz dogs are lively, and the Japanese breed is no different; they are vivacious dogs who love to be outdoors.

They need around 45 minutes of exercise daily, ideally split into smaller walks.

The Japanese Spitz does enjoy swimming on occasion, and their fun-loving nature means they are often the first in the water.

The breed also may enjoy other canine sports such as agility, flyball, frisbee or even advanced obedience.

Japanese Spitz dogs even enjoy the occasional jog with their parents.

Some vigorous play, such as tug of war, fetch or frisbee, are also a good form of exercise for this dog breed!

These exercises can be used in place of a walk on occasion, but remember they are highly social dogs and enjoy being outside and meeting new people.

7. They Are A Very Social Dog 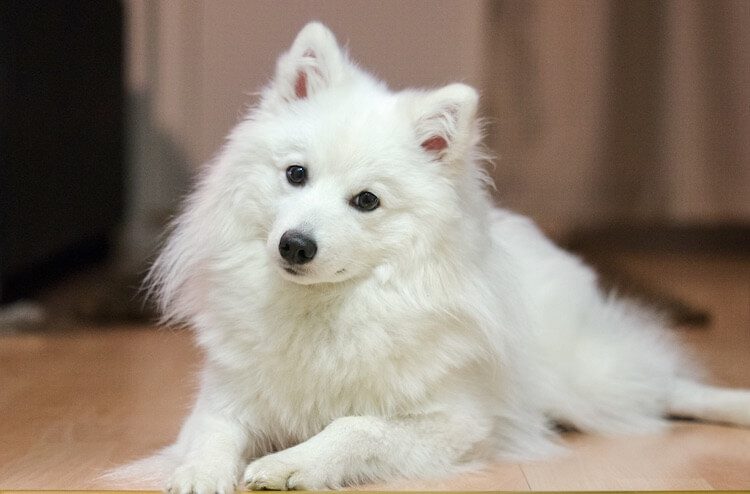 The Japanese Spitz is a very social dog, and they love to be out and about.

Everything is a fun and exciting adventure to this breed, from getting a puppacino at Starbucks to going to the dog park, or something as simple as a walk to the front door to get the mail.

These dogs can be very friendly and outgoing, but if socialized incorrectly they can be incredibly shy and timid.

To avoid this, Japanese Spitz dogs should be introduced to as many people, places and things when they are young.

These dogs tend to take most things in their stride, but, caution should be taken if you observe signs of stress of anxiety. 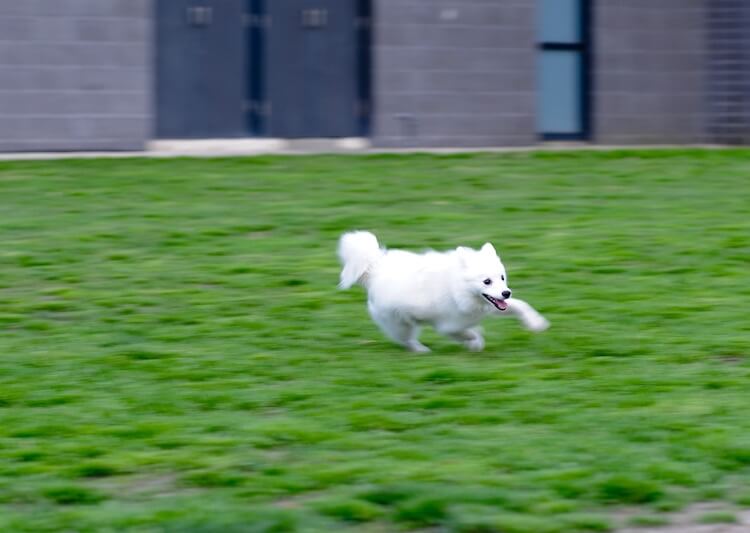 Japanese Spitz puppies are very rare, it is unlikely you will find one in your local shelter. This, combined with a small litter size of between one and six puppies, means that it can be hard to locate a puppy.

The American Kennel Club has a list of affiliated breeders who are held to the AKCs standards.

Unfortunately, there are no specific breed rescue services in the USA, it may still be worth a trip to your local shelter, but these dogs often are difficult to find.

9. The Spitz Family Encompasses Many Dogs

If you can’t find a Japanese Spitz, there are many other dogs in their breed family.

The Spitz family encompasses many dogs, and so there may be a good alternative for you:

Samoyed Dog
Japanese Spitz dogs are descendants of the Samoyeds (and cousins of the Pomeranian). These other breed types are similar to the Japanese version of the Spitz dog, but are easier to find.

The Samoyed is another Japanese dog, who were first seen around the 19th Century.

They are known for their happy go lucky nature, they enjoy play and, like the Japanese Spitz, make wonderful family dogs.

However, due to the larger size of the Samoyed (around 19 to 23 inches), they have a much higher exercise drive.

Pomeranian Dog
The Pomeranian is a European dog, first seen in the 16th century.

One of the smallest Spitz dogs, they are between 5 and 11 inches tall.

Pomeranians are known for their friendly and affectionate nature, but they can be aloof and abrupt in an attempt to prove themselves.

Although not a perfect substitute for the Japanese Spitz, these other similar dogs may be something to bear in mind when hunting for that perfect puppy.

10. A Japanese Spitz Must Be White 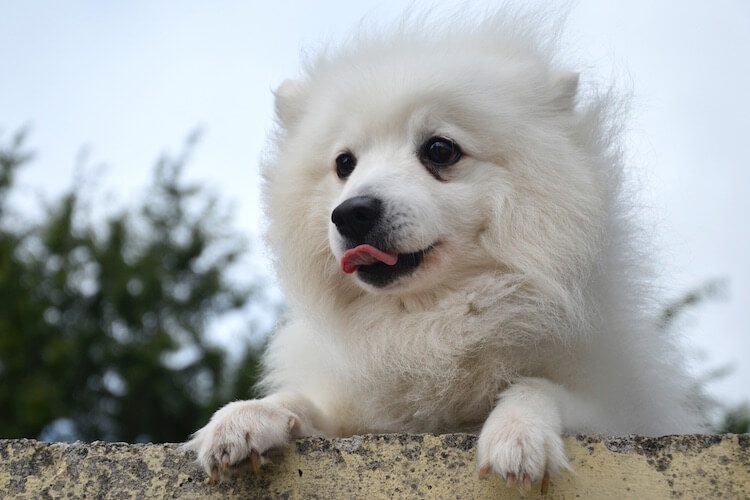 This is not uncommon for the Spitz breed type; a large majority of Spitz dogs are white.

In the case of the Japanese Spitz, their white coat comes from that of the Samoyed, who are often white or “biscuit”.

This thick white coat comes from a Samoyed’s original breed purpose of herding reindeer in the cold arctic, meaning that the coat needed to be white.

Their coat was then passed onto their descendants (i.e. The Japanese Spitz) and the color was then kept due to the selective breeding of white with the breeders.

Is white the only acceptable color?
Yes, a Japanese Spitz must be white, and only white!

According to their breed standard (across all of the different kennel clubs) the only acceptable color for this dog is white.

11. This Breed Type Does Not Tolerate The Cold Very Well

Despite being from the same family as the Samoyed, this dog does not tolerate the cold very well, and much prefers mild temperatures. If the cold is unavoidable, they should be kept inside in the warm as much as possible.

The Japanese Spitz can thrive in a variety of different living environments:

They are a good dog for families, their mischievous and playful nature makes them a great match with children.

Chasing a ball, a frisbee, or anything else you will throw for them is a favorite activity of theirs.

They can be a good match for a more active senior, as their loving and devoted nature makes them an excellent companion.

12. The Size Of This Dog Varies

The size of this dog varies somewhat between breed standards and countries:

The original Japanese breed standard suggests that this dog should be somewhere between 11 and 15 inches (30-38cm).

However, the American Kennel Club states between 12 and 15 inches is correct.

In the UK and Australia, each breed club dictates the Japanese Spitz should be between 13.5 and 14.5 inches.

Although all the breed standards vary in size requirements, they all have one thing in common; the Japanese Spitz is larger than their cousin the Pomeranian.

13. These Dogs Are Attention Seekers 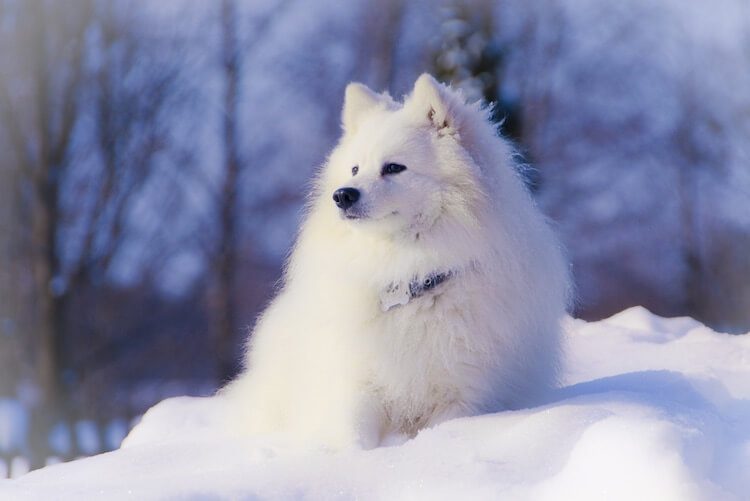 They make a great companion for people of all ages by being: affectionate, devoted and high spirited – making them great playmates and watch dogs.

These dogs are attention seekers, they thrive on human interaction.

Japanese Spitz dogs are at their happiest around their owners, be that playing games in the park, trick training or just cuddling on the couch.

This devotion to their owners makes them highly attentive to their owners and their needs. With the right reinforcement, this dogs attention to detail should make training a breeze.

However, this same devotion means they are prone to separation anxiety and destructive behavior if left alone for long periods.

It should be noted that the Japanese Spitz does like to bark and howl, especially when bored or threatened.

14. The Japanese Spitz Is Not A Fussy Eater 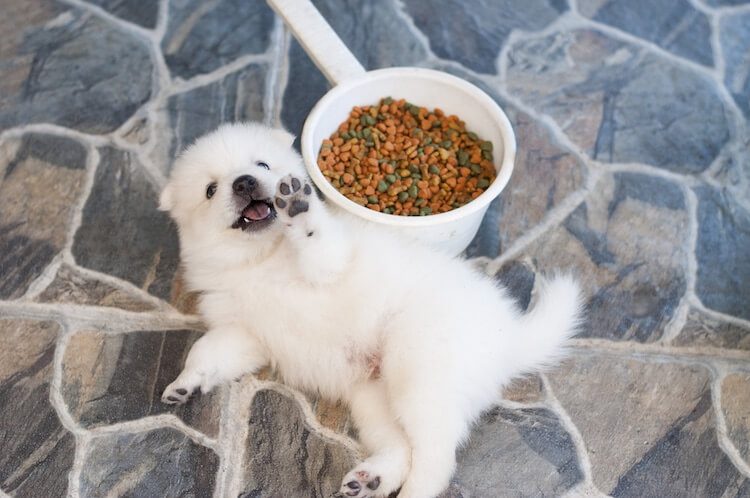 Meat should be the top ingredient listed.

With canine obesity on the rise, it is important to be aware of exactly how much you feed your dog. This is especially true whilst using kibble for training.

These dogs are just as happy munching on a carrot or other dog-friendly fruits or vegetable.

The Japanese Spitz is a loving, loyal and intelligent dog, perfect for all people from all walks of life.

Their loyal nature does mean that they do not do well with being left on their own, as a result, owners should be able to spend the majority of their day with their dog.

Leaving this dog on their own for extended periods can cause destructive and undesirable behavior.

Do you have a Japanese Spitz at home? Leave us a comment giving us your thoughts on this dashing dog in the comments.