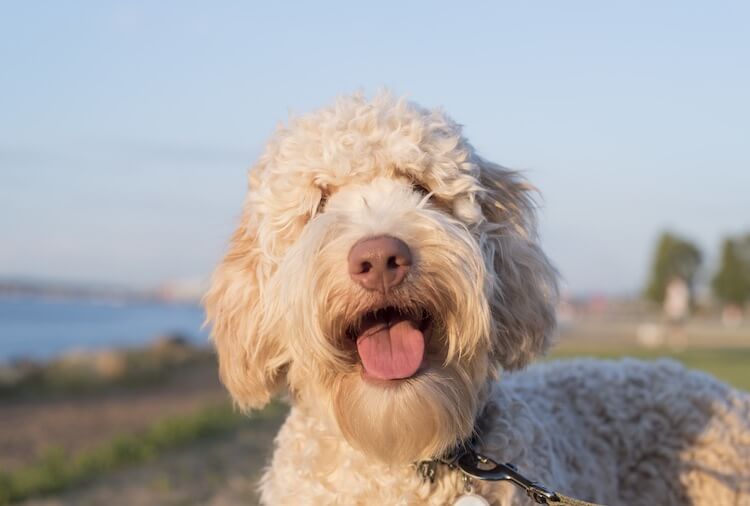 The original and most famous designer mix, the Labradoodle is a cross between a Poodle and a Labrador Retriever.

Each one is completely unique in appearance appearance and temperament. They come in three sizes, and in many different colors, meaning there really is a Labradoodle for everyone!

They are known for their adorable teddy-bear-like appearance, expensive price tags and celebrity status.

The Labradoodle dog is perfect for families, getting on well with all people and pets from all walks of life. They are friendly, affectionate and easy to train, making them a great choice for first time owners!

Thinking of owning one of these designer mixes? Lets take a look at the loveable Labradoodle in a little more detail…

Free Download: Grab A Free Labradoodle Pet Parent’s Guide To Learn Everything About This Pooch.

What Is A Labradoodle?

The Labradoodle is a cross between a Labrador Retriever and a Poodle.

Depending on the size of the Poodle (i.e. Miniature, Toy or Standard), breeders can create either a Standard or Miniature Labradoodle.

The Labradoodle was first seen in Australia in 1988, when Wally Conron crossed a Standard Poodle with a Labrador Retriever in an attempt to create a hypoallergenic service dog.

From the original litter of three puppies, only one was hypoallergenic.

The Miniature Labradoodle was first seen between 1991 and 1994.

Bred by Dr Kate Schoeffel, the Mini Labradoodle was designed to be smaller and more manageable for dog owners living in an urban environment.

After their initial conception in the late 1980s and early 90s, they were not instantly popular.

However, over time this crossbreed has slowly picked up steam and is now thought to be one of the most popular breeds in America.

As this dog is a crossbreed, they are not recognized by any of the major kennel clubs, including the UK Kennel Club and American Kennel Club.

However, they are recognized by the Designer Breed Registry.

It is important to remember that the Labradoodle is distinctly different from the Australian Labradoodle.

Australian variations stem from the original line bred by Wally Conron, and include crosses from other breeds such as Spaniels, Wheaton Terriers, Irish Water Terriers.

The Labradoodle dog is distinctly different from the Petite Doodle, as this is a Labrador crossed with a Cockapoo (Cocker Spaniel x Poodle).

Breeders will often advertise these puppies as hypoallergenic.

This can be true, in some cases these dogs do not trigger an allergic reaction in allergy sufferers.

However, sometimes these dogs can inherit the Labrador coat, which may trigger an allergic reaction in allergy suffers.

The best way to determine if your dog will trigger an allergic reaction is to spend a significant amount of time with them before adopting them.

This price variation depends on if the parents are Kennel Club registered, the reputability of the breeder and the show standing of the parents.

Attached below is an approximate growth chart for a standard Labradoodle puppy (this is an estimated rate of growth, so a few pounds either side is not a massive cause for concern).

This estimate will also vary between males and females, as males will be slightly larger. 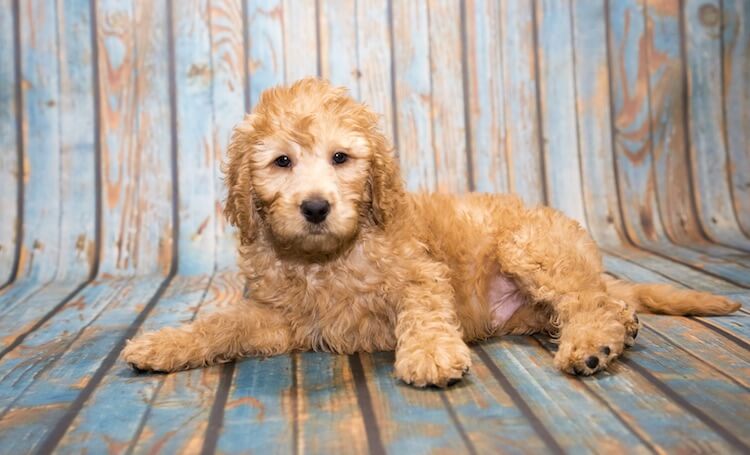 They are known to be incredibly affectionate with their owners and strangers alike.

They tend to be cuddlier as older dogs, and this can vary with their specific personality traits.

Both parent breeds of this dog are among the most intelligent in the world. Consequently, the Labradoodle is very intelligent and responds well to training.

The Labradoodle is never aggressive. They are friendly to everyone they meet. If your dog is aggressive, for any reason, consult a dog behaviorist.

They are a very high energy dog, are are known to bark if their exercise needs are not met.

As they are so intelligent, they may also bark as well if they’re feeling under-stimulated. Consequently, owners should strive to ensure their physical and mental needs are met (more about this in the care section).

As the Labradoodle dog is a crossbreed, it is difficult to predict their personality and temperament.

Generally speaking, they are some of the friendliest dogs that you will ever meet!

These dogs take everything as an invitation to be friends.

This crossbreed is a true water baby!

They love to be in water and will happily spend their days down by a lake or stream. Owners should try to take their dogs swimming as regularly as possible, especially in warmer temperatures.

Noted for their excellence with young children, they are are a wonderful choice for families.

However, they are massive goofballs, and occasionally will throw their weight around.

This can be a hazard for homes with very smaller children. While Labradoodles are always friendly and bright, interactions with younger children should always be supervised to avoid any accidents.

They are known to get on well with other household pets too, and are famously known to be friendly with cats. 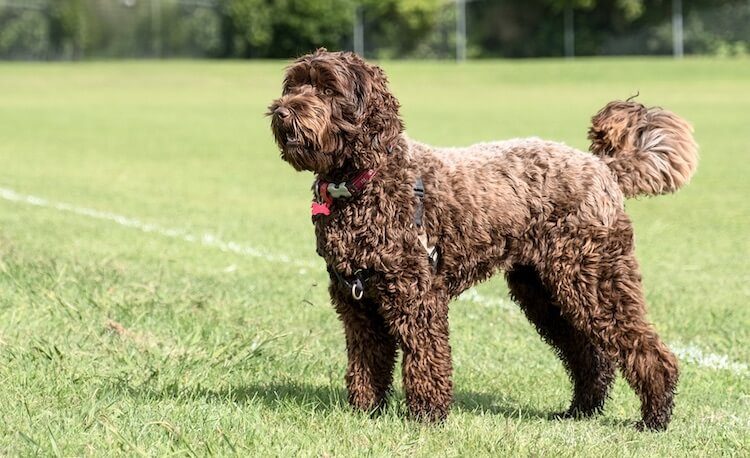 As these dogs are a crossbreed, it can be difficult to predict their size and weight.

On average, a first generation (F1 Labradoodle) will grow to be between 21 and 24 inches tall, and weigh between 45 and 65 lb.

The easiest way to guess a fully matured Labradoodle Size; is to add up their parent’s height and then divide by two (the same principle applies to weight).

A male Labrador that is 24 inches and a female poodle that is 20 inches tall will produce puppies around 22 inches in height.

They come in three sizes:

As with size, appearance is something of a lottery with this dog!

This dog is medium sized, with long legs, a kind face and slender tail.

The floppy ears and brown eyes complete their adorable faces.

Generally speaking, these dogs have a very athletic look, and are known for their “bouncy” gait.

In general, they are one solid color.

However, on occasion Labradoodles may even be brindle, phantom, patched or sable.

They can come in a variety of colors including:

There are two Labradoodle coat types; fleece and wool.

Within the fleece coat, there are two types: “curly fleece” and “wavy fleece”. The fleece coat is soft to the touch and feels textured (it is often described as like the fur of an Angora Rabbit).

The wool coat feels dense and is often curly (similar to that of a Poodle). 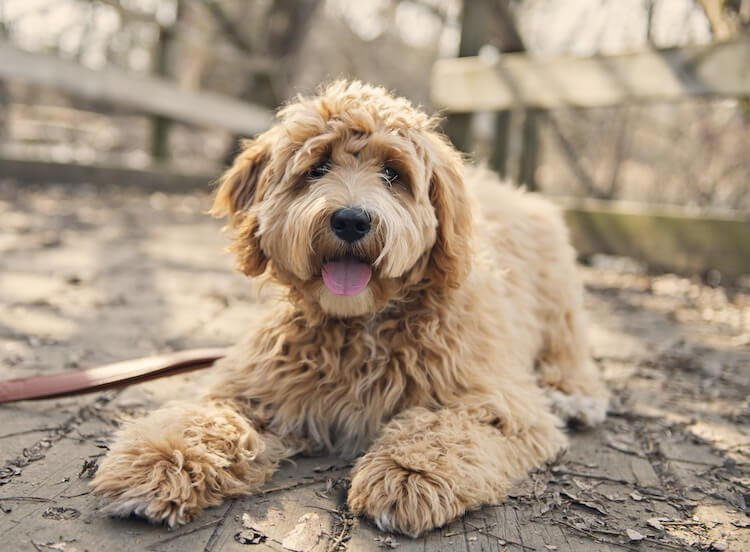 Regardless of coat type, the Labradoodle dog requires weekly brushing. Using a pin brush, owners should work through the fur, head to tail, removing any tangles.

Labradoodles are known to have sensitive skin and so you should not wash your dog unless necessary.

When bathing, use warm soapy water with a medicated shampoo for sensitive skin.

On average, Labradoodles need clipping every six to eight weeks. Ear hair should be trimmed regularly as it can be a breeding ground for infection.

Nails should be clipped every two to four weeks by a professional such as a veterinarian or groomer.

Teeth should be brushed as frequently as your Labradoodle will allow, ideally this should be every day but once weekly at a minimum.

Some of these dogs may be hypoallergenic and not shed at all.

In other cases, they may shed lightly all year round, with two periods of heavy seasonal shedding as they grow in their summer or winter coat.

Like all elements of a mix dog, this is very difficult to predict and consequently you may not have a hypoallergenic puppy when hoping for one.

This dog comes in all shapes and sizes, so there really is a Labradoodle for everyone.

However, standard sized (as opposed to miniatures) need regular exercise and an owner that can keep up, so active owners are a must.

Beyond this, they are well suited to many life styles, and do well in homes with singles, couples and families.

A Labradoodle full grown will need to eat two cups of high-quality food each day.

It is advisable to feed your dog twice daily, once in the morning and once in the evening. For example, feeding once at 8am and 5pm.

Regardless of if you feed your dog a wet, dry or raw diet, protein should be the primary ingredient. This is especially true of a dry diet.

Try to avoid foods that contain grains as these are particularly difficult for Labradoodles to digest.

Labradors are prone to Gastric Torsion and so encouraging your dog to eat healthy, nutritious food is a must.

Labradoodle puppies need 5 minutes of exercise for every month they have lived.

A 9-month-old puppy needs 45 minutes of exercise daily. This should ideally be split into two 20-25-minute walks.

As adults, they need two-hour long walks daily. These should be as varied as possible, as Labradoodles are highly intelligent and may grow bored of repetition.

These active dogs may enjoy running and swimming; owners should try to get a feel for what types of exercise their dog prefers.

Both Labradors and Poodles have excellent recall so you should have no issues with off lead walks.

To be safe, never let your Labradoodle off the lead in busy areas, unless you feel completely comfortable they will return to you when you call. 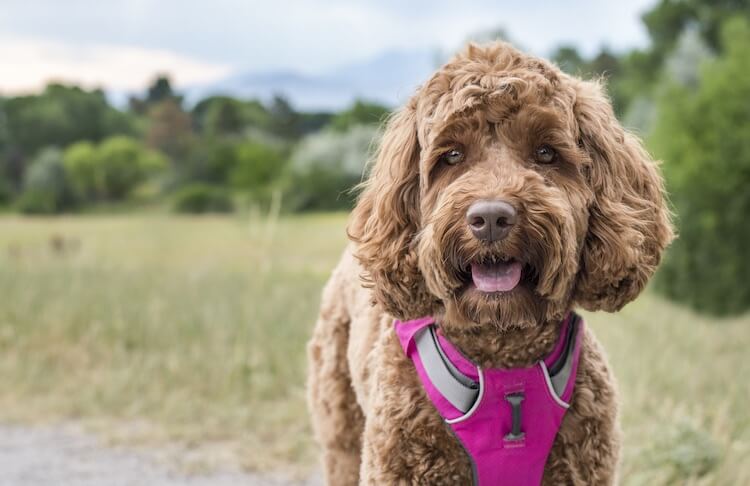 As the Labradoodle was originally bred to be a service dog, they are known for their ease of training.

They are adaptable and do well in most situations.

Labradoodles love to please, and as a result, they do well with first time owners.

However, their intelligence means that they are known to get bored on occasion and cause mischief! Keeping your dog entertained can be an excellent way to prevent naughty behavior.

Early socialization is extremely important to the Labradoodle – this allows for early expectations of behaviour to be set.

Taking your Labradoodle puppy out to see as many people, places and things as early as possible and allowing them to take things in their stride will make for a happier dog in later life.

Labradoodles are prone to several health issues including:

Given the potential for health issues, insurance may be something to consider. On average, health insurance for a Labradoodle usually costs around $18 USD monthly, or $200 per year.

Despite the health concerns, Labradoodles tend to live long, healthy lives. This happy crossbreed has a life expectancy of between 12 and 16 years. 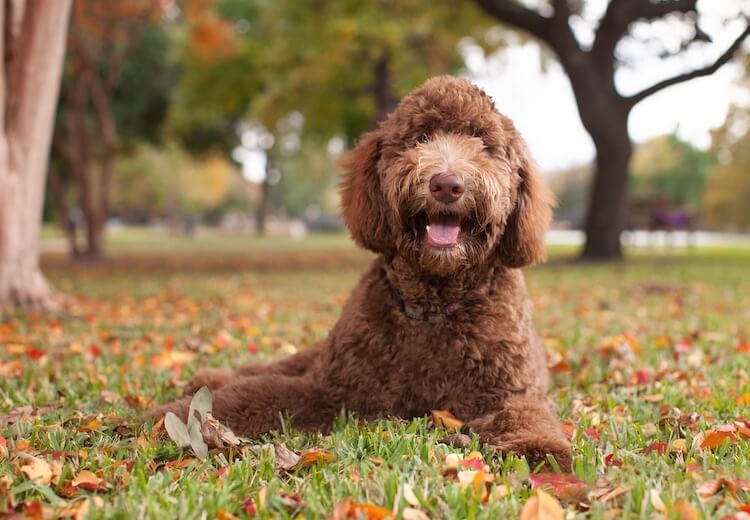 The Labradoodle is a medium to large crossbreed who is a great match for any active owners.

As they come in three different sizes, they live happily in most environments (from the city to the country) as long as they get enough physical and mental stimulation.

Labradoodles also have somewhat intense grooming requirements so any prospective owners must be prepared for a lot of brushing and clipping!

This dog does do well with all owners (singles, seniors, couples and families), however, any potential owners must be prepared for a lot of cuddles as they live to be petted, brushed and played with!

Do you have a Labradoodle at home? Leave your thoughts on this clever canine in the comments.