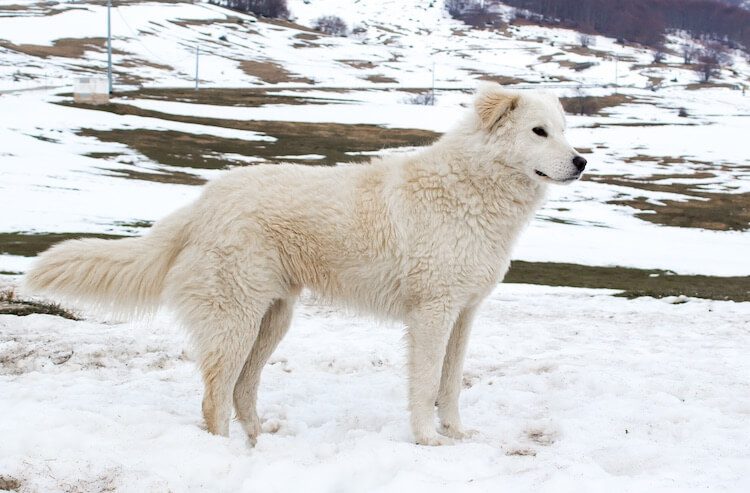 Sometimes called the Maremma-Abruzzese, the Maremma Sheepdog is a large canine indigenous to central Italy.

Pronounced mar-EMM-ah, this dog is commonly seen as a working dog.

Known for their ability to protect their flock, a pack of these dogs will keep their sheep safe from just about anything!

They came to fame a few years ago, after the 2015 movie Oddball told the tale of how this courageous breed protected the last remaining penguins on Middle Island from the invading foxes.

Since then, dog fans world-wide have been desperate to know more about this breed, so keep on reading to find out more…

What Is A Maremma Sheepdog?

Early sheepdogs are seen as far back as Roman Literature.

Mentioned by famous writer Varo, these canines were bred to be sheepherders and guardians of flocks.

Over many years, this dog has captured the hearts of both breeders, owners and artists.

Maremma Sheepdogs have been seen featured in statues, paintings, literature and engravings.

The reason this breed has remained popular is due to the fact there are wolves living in the mountains around central Italy.

No other breed of livestock guardians could protect as well as the Maremma-Abruzzese, consequently they are incredibly popular amongst farmers.

The breed was not instantly popular, by 1940 there were only 40 dogs registered with the Kennel Club Italiano.

To this day in Northern and Central Italy these flock guardians can be seen fulfilling their original purpose.

Traditionally, flock guardian puppies would be introduced to the sheep they are going to be guarding as puppies, this helps to create a bond between dog and sheep.

This process would happen at around 8 weeks of age, and from this point onwards, the Maremma would live with their flock.

As a pet, a similar process occurs. When bringing your puppy home at eight weeks of age, they will bond with you for life and consider you a part of their flock; especially children.

Typically, a Maremma-Abruzzese will produce between six and nine puppies in each litter.

Obtaining one of these canines is known to be incredibly difficult as they are incredibly rare outside of their native Italy.

Unlike other Livestock Guardian breeds, these canines are not known to be aggressive with people they don’t know.

They are reserved and wary, but it is unlikely they will be hostile. To help them develop, early socialization with other people is necessary.

These animals do not have a high prey drive, and so are unlikely to disappear off chasing a neighboring cat.

The natural independence of the Maremma Sheepdog means they are quite happy to be left alone for extended periods, provided they are given a job to do in their owner’s absence.

This can include simple brain games such as puzzle balls, or sentry duty as a watch dog.

Not known for being aggressive, this dog makes a very poor guard and attack dog. However, their aloof nature and low bark makes them excellent watch dogs and may even act as a deterrent to potential intruders.

The best way to describe the personality of the Maremma Sheepdog is calm and even tempered.

They are noted for their calming presence and their relaxed way of living. Despite this, the Italian flock guardian is not the best canine for first time owners.

Whilst they are devoted to their owners, the Maremma is also fiercely independent.

They are known for being an affectionate livestock guardian, but are not attached to them like some other breeds are.

These pooches are incredibly easy-going and are content to spend their lives pottering around protecting their flock. 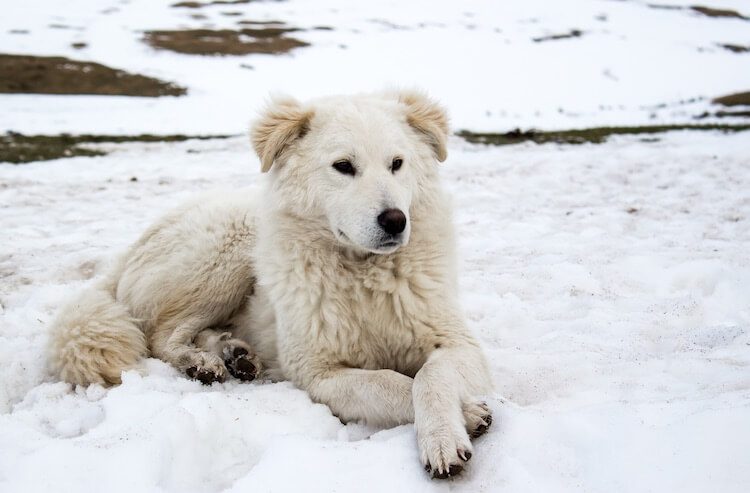 When raised alongside a family, this breed is utterly devoted to them.

They are outwardly affectionate towards their family members and are even great with young children, protecting them from harm.

Maremma Sheepdogs were bred to co-exist with other animals and consequently get on well with other household pets too.

Known to be incredibly affectionate with cats, both parties involved respond very well to one another and can often be found sneaking off for a cuddle.

The Maremma is not a hard breed to identify!

They are stocky, yet graceful dogs, slightly longer than they are tall.

According to their breed standard, they almost resemble polar bears!

This is a very good description, as their large white double coat, strong appearance and giant size makes them look like polar bears.

One of the most iconic and beautiful features of the Maremma Sheepdog is their tail. Long, curved and feathering, it is a sight to behold. This elegant tail perfectly matches their graceful poses.

Italian flock guardians are considered to a large dog by most breed groups, although the size of the fur means they should be considered gentle giants.

These fluffballs stand between 24 and 29 inches tall and weigh between 65 and 100lb.

Females are slightly smaller than males and ever so slightly more petite than males. 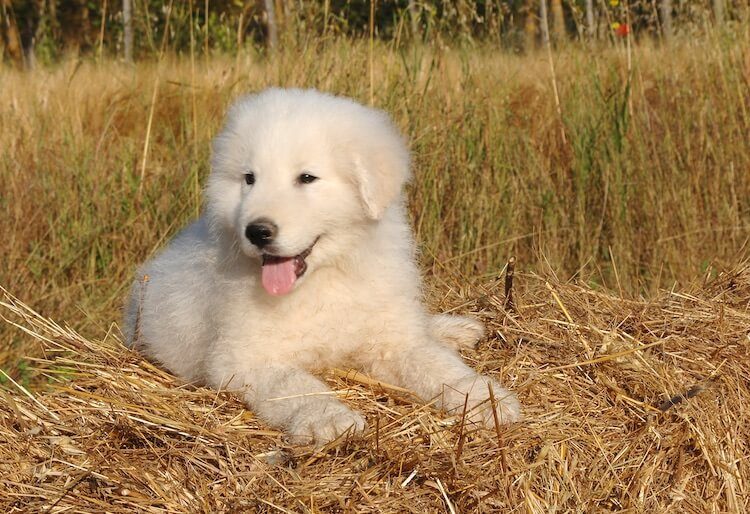 The only acceptable color for this livestock guardian is white! Consequently, you will need to find plenty of good names for a white dog.

It is incredibly rare to find a Maremma Sheepdog in any other color than white.

Occasionally you may find a dog with lemon shading, pale ivory or even pale orange. This is permissible by the Italian breed standard provided it is not excessive.

Another identifying feature of this Italian flock guardian is their coat.

Their long, wavy double coat is very dense, especially around the neck. However, it is shorter on the ears and face.

It is described as rough and almost wire-haired to the touch.

On average, the coat is around 3 inches in length.

Working dogs, may go their entire lives without being groomed or bathed, however those that are kept in houses as pets may require some grooming.

Housekept Maremma Sheepdogs will need brushing once weekly to maintain their fabulous double coat. Using a metal deshedding brush is the best way to detangle their long thick coat and remove loose hairs.

This breed is not considered to be hypoallergenic as they are heavy shedders, making them unsuitable for allergy sufferers.

Due to their heritage as independent working sheepdogs, this canine does not need clipping as their coat will naturally remain the same length.

They also do not need frequent bathing as their coats are naturally dirt and water resistant, potential owners may wish to bathe once or twice a year, ensuring that their thick coats are dried thoroughly afterward. 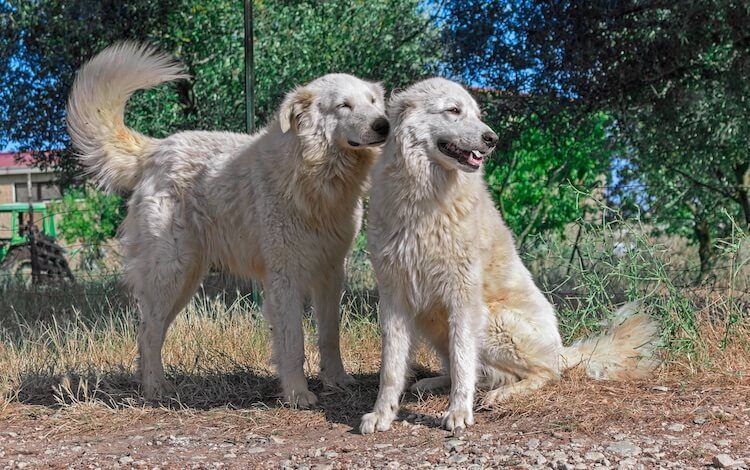 These working dogs are well suited to family life!

They do well with families, both when working and being kept as pets.

Because this canine needs lots of exercise, they thrive in an environment where they have the space to move, work and play.

This means they are best equipped to live in houses or apartments with gardens or a farm.

Due to their high energy and athleticism, these dogs need a high-quality dog food that can keep up with their fast metabolism.

Owners should feed between four and five cups of high-quality dog food which is specially formulated for sheepdogs.

This should be split into two meals, one in the morning and one in the evening.

While they are puppies, try to feed a brand named puppy kibble, specifically tailored for Sheepdog puppies.

However, when they are older the Maremma-Abruzzese is well suited to a bones and raw feed diets.

These dogs are used to long walks, because of their guardianship role, as a result several long walks each day are better than one short run.

Their natural stamina and high energy levels means they are excellent hiking buddies, enjoying long day treks up mountains or along canyons.

One easy way to exercise a Maremma Sheepdog is to take them swimming. These dogs love water, so takes them to a local dog swimming pool or a local lake.

It is possible to supplement walks with play, but short of being worked these canines are best suited to active families who can keep up with them.

Giving them access to a garden where they can exercise themselves will also be beneficial.

Maremma dogs are not a dog for the fainthearted trainer.

While sheepdogs are smart and loyal, this breed would traditionally be out on their own, working in small groups to protect their flock.

Consequently, this would mean being miles away from their owner and having to make decisions of their own accord; this independent streak makes training a challenge!

Training is not impossible and they can learn basic obedience skills, but they will never have the same desire to please their owners that other breeds do.

Therefore, training will require lots of trust, patience, and a mutual respect. Owners will have to work on not only basic obedience, but their relationship with their dog on an almost daily basis.

Maremma Sheepdogs are incredibly healthy dogs and often live long happy and healthy lives. When looked after correctly, this breed can live between 10 and 13 years.

They have two potential health issues, neither of which are particularly common in the breed.

Firstly, as with all larger dog breeds, hip and elbow dysplasia is a concern.

This is a developmental condition, whereby an abnormality develops in the hip or elbow joint, causing the cartilage to develop incorrectly.

Depending on the severity of the condition, it may be possible to manage using pain medication, however more severe cases will require surgical correction.

Secondly, there is a history of eye problems within the breed.

This can include conditions such as Cataracts and Progressive Retinal Atrophy. Most of these conditions are genetic so it may be possible to test for the them before purchasing or adopting a dog.

The Maremma Sheepdog is a bold, intelligent dog with a rich and full history.

These loyal dogs have been noted to have an independent streak due to their original breed purpose, and consequently they are only suitable for experienced owners who are prepared to work at their relationship with their dog.

The other thing of note with this breed is their high stamina lifestyle, making them best suited to owners who can take them on long walks to enhance their natural ability.

Leave us your thoughts on the Italian flock guardian below.