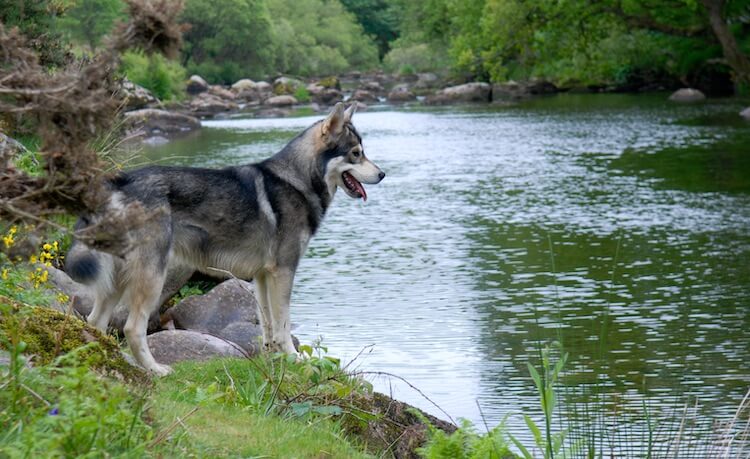 Known for their wolf-like features, the Northern Inuit Dog is a breed that is often confused for a Dire Wolf.

You may recognize these beautiful creatures from Game of Thrones, as one of them played Nymera; a Dire Wolf from the hit series.

The Northern Inuit Dog was first breed in the late 1980s for owners who wanted the look of a wolf with the companionship of a dog.

Although they look like a fierce wolf, this dog is actually a very friendly breed, who is extremely intelligent and loyal.

Known for being a wolf dog, this canine comes in several different color variations; the classic gray, white, sable, or black.

Want to know if you have what it takes to care for this breed and if they could be the newest addition to your family? Then keep on reading… 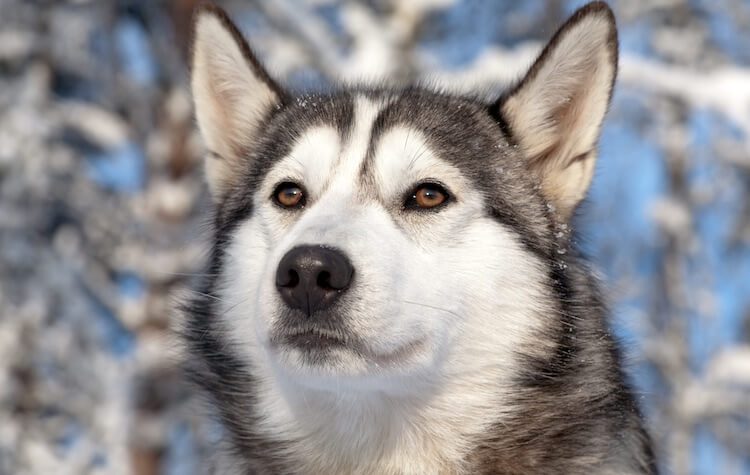 The Northern Inuit Dog is known for its close resemblance to natural wolves; this is what they were originally bred for.

Despite their appearance, these dogs are known for being very friendly, loyal, and make great family pets.

This dog breed was created by the selective breeding of several different working breeds:

The original breeder wanted a dog that had wolf-like appearance and strength, but was easily trained and friendly towards people.

It is believed that the Inuit people of Canada and Greenland were the first to breed this dog.

The Northern Inuit dog was first brought into the United States sometime during the 1980s.

This breed is now only bred by the Northern Inuit Society and this association has taken great care to not mix the breed.

The wolf DNA, that was once a part of this breed, has been diluted almost to 0%, making sure that this canine is loving and loyal.

Due to the Northern Inuit Dog being a new breed, the American Kennel Club does not recognize them.

However, there are several clubs, and hopefully with the popularity of these pets growing, it won’t be long before the American Kennel Club recognizes them as well.

Until 2014, litters of the Northern Inuit puppies have only been born in the U.K. and Ireland, which is another factor in the long waiting list.

To remedy this problem, puppies from the U.K. have been exported to other countries all over the world.

There are now registered breeders in the United States and a Northern Inuit puppy costs between $800 to $1000 USD.

There are also specific rescue organisations if you would prefer to adopt one of these dogs.

The normal size of a litter is between 5 to 12 puppies, like most other large dog breeds.

These puppies will mature at between 10 to 13 months of age, growing steadily to their adult size, before “filling out” during their adolescent period.

Along with being known for their wolf-like appearance, this dog is also known for being very friendly and affectionate.

The Northern Inuit Dog is known to be very protective of their territory, and their people, making them very well suited to be a good watch dog for your family.

Due to this fierce loyalty, they do sometimes develop separation anxiety.

They can also be a very high energy breed, which when coupled with their separation anxiety, can be a destructive combination.

To prevent this, it is extremely important for you to make sure your Northern Inuit Dog is getting all the exercise and play that they need.

This breed is known for having a very average prey drive, due to them being bred for more pulling and less hunting in their working roles.

Finally, this breed has a high tendency of play-biting, but this behavior can be removed through training and positive reinforcement; they are not aggressive, and are usually friendly toward strangers.

The Northern Inuit Dog is known for being fiercely loyal and protective, whilst being friendly to most strangers.

They were bred to be extremely intelligent and confident, and have one of the best staminas in the canine kingdom.

With this in mind, they do need to be walked daily and can be very energetic.

If you are known for having an active lifestyle, this breed could be perfect for you.

The Northern Inuit Dog is known for being very friendly to strangers whilst also being very protective over their families; especially with children.

They do best in an active family, so that they can get all the daily exercise they need.

Make sure to socialize this canine with other people early, so that they will be friendly and affectionate towards strangers.

This dog also gets along very well with other pets, making them the perfect addiction to a household with dogs already. 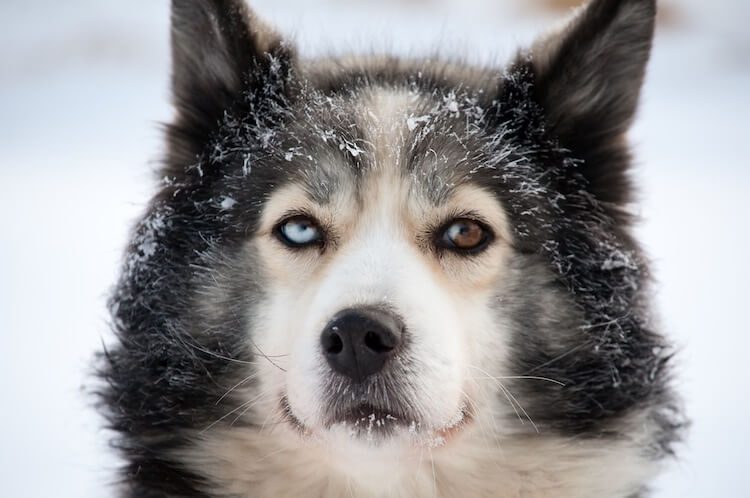 This dog can be identified immediately by its wolf-like appearance; with a very bushy tail, pricked ears and a deep chest.

Bred for working, this dog has the stamina and strength of a wolf, but the loyalty and companionship of a dog.

These canines are bred to be tall, like the breeds first used to mate with this dog, but they also are lanky and agile.

They are fluffy and sweet which makes them an adorable pet for any family!

The Northern Inuit Dog is known for being a large breed.

The Northern Inuit Dog is known for having coloration that is very similar to a wild wolf.

They come in several color variations:

The Northern Inuit Dog has a smooth, straight and short coat, which is very dense.

They have a moderate amount of shedding, and only need to be groomed a very few times each week.

However, in the spring and the fall, they “blow out” their coat, and will shed very heavily during this time period.

Their coats are extremely thick which helps to keep them warm in the cold weather.

It is recommended that you brush your dog at least two times each week to keep their undercoat healthy.

Apart from that, they are very low maintenance dogs that need very little professional grooming.

Like most dogs, they will need their teeth brushed daily and will occasionally need their nails to be trimmed.

This breed is best suited for someone who is very active, and someone who will treat their pet to lots of walks and playtime.

They are also best suited to families who live in colder climates; due to their double coat which makes them more prone to overheating.

As with any dog, it is important to make sure you are providing them with a well-rounded and balanced diet, this will keep your Northern Inuit Dog healthy and happy.

Before his first birthday, however, with the speed at which he grows, he may need to be fed three times daily (breakfast, lunch and dinner); once he is fully grown, he will be fine being fed once daily.

Along with normal kibble, he will also like some fruits and vegetables in his diet, but make sure to introduce one item at a time as they can sometimes cause digestion issues.

The Northern Inuit Dog is known for being very high energy, so regular walks and playtime is a definite must for any potential owner.

They love to go on walks, but remember, you should not walk them off leash until their recall has been trained properly.

It is best to always walk them on a leash in any new places.

A fenced backyard is also wonderful for them, as they love to run, jump and play.

Because of their high intelligence, they love playing games such as fetch. This will help to stimulate them and promote positive behavior.

The Northern Inuit Dog is extremely intelligent, and therefore they will be able to learn most tasks and jobs you give them.

Whilst their intelligence can make them a bit more stubborn, training should begin very early in their development to help combat this.

These dogs also love positive reinforcement, so treats are a must when training!

This breed needs lots of mental stimulation to keep them from becoming bored and destructive, so make sure to keep them either training or playing (when you are not snuggling them).

With this breed being a large dog, they are known for being prone to hip dysplasia.

They can also develop cataracts and epilepsy, but as a whole this is a very healthy breed only prone to minor health afflictions.

Because the Northern Inuit Dog Society have such strict breeding guidelines, it is very important you only purchase this breed from on of their approved breeders.

This will reduce hereditary conditions and continue to make the breed’s bloodlines healthy.

The Northern Inuit Dog is a loveable dog in a beautiful wolf’s body!

They are known for being swift and strong, but also being great family companions.

This breed will do the best in an environment where they will receive a lot of mental and physical stimulation, so an active family is best suited for them.

Due to their double coat, they are also a prone to overheating, so a cooler climate would be very beneficial for them.

Along with being very active, this large breed is known for its friendly attitude and love for its owners.

Could the Northern Inuit be the dog for you? Let us know what you think!