Just like any other Labrador, the Silver Lab is happy, lovable and full of energy.

What makes them unique is their color! They will have grey/blue tones to their fur, nails, nose and eyes.

Despite their name, they sometimes will have light brown tones to their fur too – this is why the American Kennel Club registers them as Chocolate Labs.

Confused and intrigued? We have put together 7 interesting facts to shed some light on this increasingly popular Labrador.

1. A Product of Diluted Genes

Exclusive Giveaway: Grab A Free Silver Lab Dog Guide To Learn Everything About This Furry Friend.

Whilst the science says that the Silver Labrador is a result of a diluted gene, there are some who believe that the they were crossbred with Weimaraner.

It is believed that they appeared during the 1920’s from breeders who were renowned for their “rare” pointing Labradors (think German Short Haired Pointer; a renowned family and hunting dog). If you ever come across a Weimaraner, you’ll notice that they also have the same characteristics as each other.

Many thought it was too much of a coincidence that the same kennels would produce Pointing Labs and then Silver Lab Puppies.

What is a Silver Lab?
The science suggests that in fact, it is a diluted version of a Chocolate Labrador because of their genes.

It is argued that Pale Chocolate Labs were mated to produce this dog. Subsequently, first generation Silver Labs have just been mated with other first generations to continue the line.

The American Kennel Club allows them to be registered with them as a Chocolate Lab. 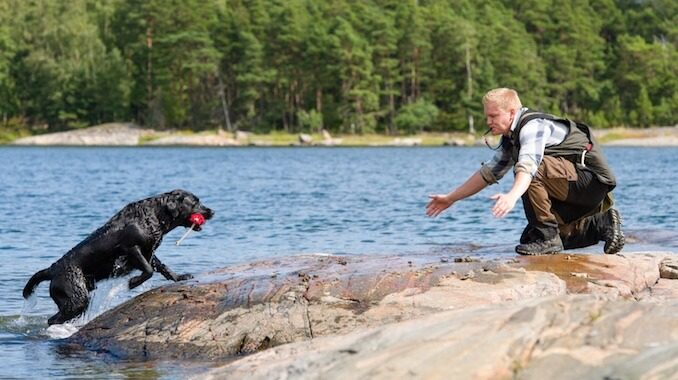 Sociable and outgoing, Labradors have been a family favourite for decades.

As we’ve suggested, it is argued that a Silver Lab is just a diluted chocolate lab. For that reason, they carry the same characteristics and temperament as every other family friendly lab.

Originally duck retrievers from Newfoundland, it was the English Nobles who fell in love with them on trips to Canada, returning to Britain to further develop the breed in the 1800s. Hence why sometimes they are known as a Silver English Lab.

It took a while for them to find their way to the US, not having their first registration with the American Kennel Club until 1917. Three years later, they appeared in the US too.

Despite appearing quite soon after, their existence has been almost cloak and dagger like – maybe thanks to certain breeders arguing they aren’t true labs.

This dog is often thought of as being quite rare. For that reason, their price tag is at a premium; even more so from a responsible breeder. A puppy can cost anywhere between $800 – $1500 for a Silver Lab Puppy.

We already know what you’re thinking, if they’re rare they’re not over-bred. If they aren’t over-bred, they’re healthier right? Not exactly.

During their 10-15 year life span a Silver Lab Dog can suffer the same health issues as all other Labradors:

It is believed that the gene responsible for the diluted color, causes abnormalities in the hair follicle making it impossible/difficult to grow new hair. Whilst not curable, it is possible to treat through medication.

4. Silver Labs Are Known For Trainability

The Lab is a firm favorite known for its trainabililty – this dog is no different.

Responding best to positive reinforcement and reward based training, the whole family should be involved in training this gentle soul.

Renowned for scavenging, food rewards will have your dog eating out of the palm of your hand – literally. Use food treats to teach basic commands such as sit, down and paw.

Teaching the “sit” command:
With your dog in front of you and a treat in hand, gain his attention. Hold the treat just above his nose and slowly move it backwards above his head. He should automatically lower his back end to follow the treat. As soon as his bottom touches the floor, reward him. Repeat and label the behavior “sit!”

Teaching the “down” command:
With your dog in front of you again, from the sitting position, lower a treat towards the floor and pull it out towards you, he will again follow it with his nose and move into the down position. As soon as he is where he should be, reward him. Again, repeat and label the behavior “down!”

Avoid the use of aversive methods (punishment such as scolding, smacking or yanking on the leash). We know that these actually create and exacerbate problematic behaviors in dogs.

Monitor how many treats you are giving to your dog – you can always swap out some of his daily food to accommodate for some healthy dog snacks.

5. They Have Cast Iron Guts

They will eat anything and everything:

An Adult Silver Lab will grow to around 21-25” in height and weigh anywhere from 55 to 80 lbs. Fully grown, you should expect him to eat anywhere between 1650 and 2400 calories per day; this will be based on his weight and daily exercise.

If you are using food rewards, swap out some of his daily feed to accommodate.

Labradors are prone to gaining weight if their food intake isn’t monitored. You should be able to see a waistline and feel his ribs. Any concerns about his weight, speak with a veterinarian.

We have mentioned their tendency to scavenge – remember to keep an eye on him when out walking to ensure he doesn’t eat something he shouldn’t. Toxic foods for dogs includes:

If you have reason to believe he could have eaten any of these, even small amounts, seek veterinarian advice.

6. Silver Labs Are The Most Popular Dog Breed in the US 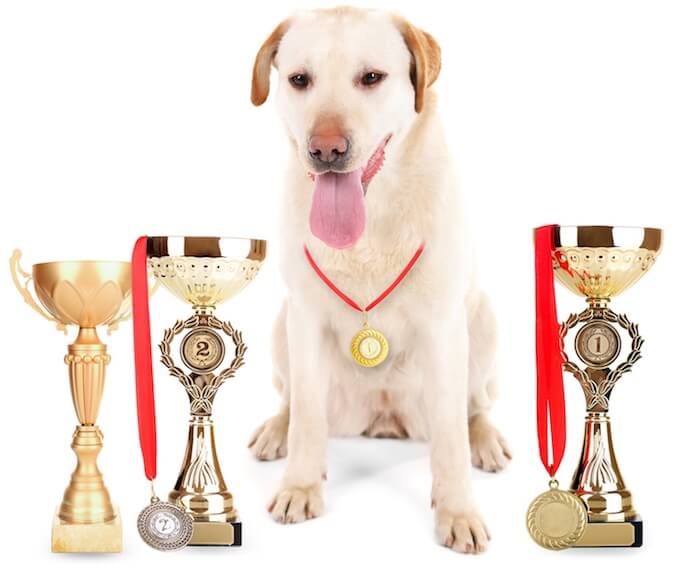 It’s not surprising to know that Labradors as a breed rank number one in popularity with the American Kennel Club.

They are gentle, adaptable and sociable. Most people know of someone with a Labrador.

Despite their renowned Silver Lab temperament, this isn’t a given. Early and continued socialization is still essential with this incredible breed.

Introduce your puppy to everything the world has to offer; people, animals, equipment, noises, smells, everything.

Introduce new experiences in a safe and controlled way, for short periods of time. Praise and reward when necessary.

This also includes handling and grooming – handle your puppy from a young age; check their ears, eyes and paws. Introduce a brush or comb. The more comfortable they are with being handled the easier visits to the veterinarian or groomer will be.

Labradors in general are best suited to those with an active lifestyle as they are certainly an enthusiastic athlete.

Expect upwards of 60 minutes per day walking and exercising with additional time spent training and playing. They will happily hike through fields or up hills and equally have a ball romping in the dog park.

Due to their history, most Labs are still avid swimmers – if you are able, find a safe water source to work on their retrieving.

As you can see, the Silver Lab, is just like every other Lab – super-friendly, happy, docile and full of beans.

They are just a different color thanks to their genes. They have also held on to the scavenging genes like every other Labrador; stealing garbage where possible and making every guest wonder if you ever actually feed him.

A Silver Lab would be a good addition to any family, especially those with an active lifestyle – they love walking and playing.

Generally easy to train, every member of the family can get involved and ranked number one for popularity, we can see why.

Who wouldn’t want a gentle, adaptable and happy addition to the family? Time and patience for early and continued training and socialization will help you raise an incredible companion. So is this dog for you? Let us know by commenting below.

About John Woods 248 Articles
John Woods is the founder of All Things Dogs, member of the Association of Professional Dog Trainers, graduate in Animal Behavior & Welfare and recognized author by the Dog Writers Association of America.
Website Facebook Pinterest YouTube

Border Collie Lab Mix – The Ultimate Guide to a Borador

Also known as the Borador, this border collie lab mix, despite sounding like a holiday destination, is actually the most reliable dog you could wish for. This intelligent and loving canine is the result of mating a Labrador Retriever with a Border Collie. Due to [Read more…]

The Mini Labradoodle is a smart, sassy and sweet designer dog. Affectionally known as “the world’s most loving dogs”, these little pups make themselves known with their adorable faces and loving temperament. They pack a lot of heart into their mini 45lb size, and, if [Read more…]

The German Shepherd Lab Mix is what happens when you cross America’s dog next door, the Labrador Retriever, with the world’s most intelligent German Shepherd? One of the best family-friendly dogs, this cross breed is loyal, intelligent, playful and will show its owners unlimited amounts [Read more…]