Teacup dogs have been a trend in modern media since the 2000s when Paris Hilton made a handbag Chihuahua a fashion accessory.

In 2016, Hilton purchased a Teacup Chihuahua for $8,000, cementing the dog’s popularity with this unbelievable price-tag!

It isn’t just the rich and famous who loves these dogs either, social media loves them too! Adorable little teacup dogs are becoming incredibly popular on Instagram!

Which brings us to the question, why are these dogs so wildly popular?

So we decided to shortlist our favorite seven teacup pooches that we think you need to see. 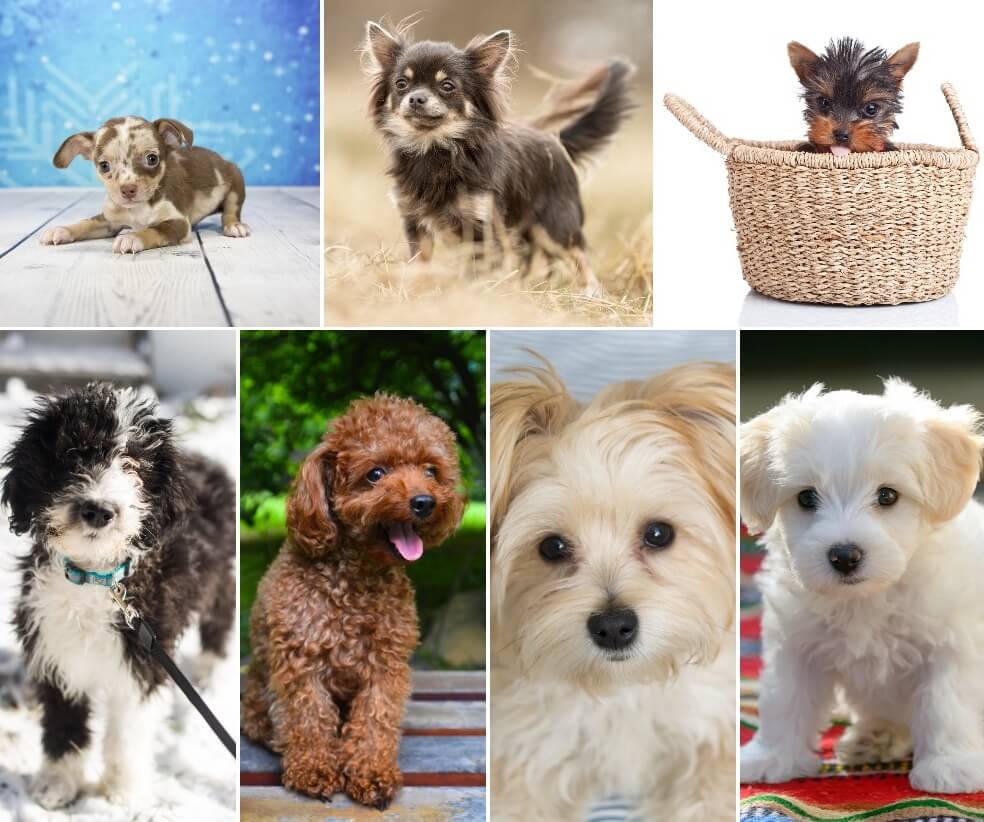 The Yorkshire Terrier was originally bred as a working dog, as a result their temperament can still be seen in this feisty teacup dog.

Slightly more reserved than the sassy Chihuahua, these dogs can be incredibly tenacious and brave.

They are also extremely affectionate, loving nothing more than to be curled up in their owner’s lap or getting a belly rub.

It should be noted that this breed is not great with children due to their small fragile size and snappy nature.

Like the Teacup Maltese, these dogs have two coat types, the puppy cut and the show cut. Owners can choose to either cut their dog’s hair around its face, or tie it back with a bow. Regardless of haircut, Teacup Yorkies need brushing very every day as their coarse, fine coat tangles easily.

Chiweenies are a cross between a Dachshund and a Chihuahua and are bred to get the best bits from both their parents:

There’s no other dog like a Dachshund, as they are “both short and long”, as the lyrics say in the “The Dachs Song” and this is just as true for the Chiweenie!

This teacup dog is often tan, black and tan, blonde, black or white.

Chiweenie dogs are known for their tenacity. They are feisty puppies, not fond of strangers, and are known for barking. However, they are loyal souls, being choosy with who they love, but loving those they choose unconditionally.

This devotion to their owners can create some issues with separation anxiety (which is often common with teacup dogs).

Although small, Chiweenies can be incredibly destructive when left on their own.

Due to their achondroplasia (a form of dwarfism), these dog may be prone to health issues such as spinal, dental and leg problems.

A cross between the Yorkshire Terrier and a Maltese, this dog is a perfect mix of two teacup dogs!

These dogs are just as confident as a Yorkie, but as playful and as loving as a Maltese – the best of both worlds.

A lapdog to its core, Morkies love nothing more than attention and love.

The Morkie is a similar to a Chiweenie, in that they tend to attach to one person and love that person solely.

Although they can be playful and affectionate with others, they tend to become like their owner’s shadow, following them wherever they go.

They can do well in family situations, but they can be a little snappy so teaching both children and dogs how to play is essential. For this reason, Morkies are commonly seen in homes with older children, but are even more commonly a favorite of singles and seniors.

The Morkie is a big fan of barking! Morkies will often bark when bored or for attention. Stimulating your dog with games, training and lots of exercise and affection will help to compensate for this.

It is important to note that the Morkie can be stubborn whilst training and consequently this little dog may be a better choice for more experienced owners.

One of the bigger teacup dogs on this list, the Toy Sheepadoodle is a 15lb ball of fluff and fun!

The Sheepadoodle is a crossbreed between a female Old English Sheepdog and a male Poodle.

This is to allow for Sheepadoodles of many different sizes to be bred, i.e., Standard. Miniature, or Toy.

Sheepadoodles are recognizable by their large, fluffy coat, almond shaped dark eyes. Their bodies and faces may be large and stocky, like an Old English Sheepdog, or slender and lean like a Poodle.

These dogs are a popular choice among families who are looking for a hypoallergenic dog as these dogs are full of fun and low on shedding!

Quick as a whip, they have the intelligence of the Poodle with the comedic timing of the old English sheepdog.

It should be noted that owning a Sheepadoodle does come with one obligation: grooming, and lots of it! Old English Sheepdogs have incredibly high maintenance coats, as does the Poodle, so regular brushing of their lush coat is an essential!

They will need brushing minimum 2-3 times per week, but ideally daily if possible.

The coat will also need clipping every 8 to 12 weeks, depending on how quickly it grows and the temperature of where to dog is living. Baths should be given every 6 to 8 weeks, or more often if the dog is dirty!

Who does love a cute, fluffy white dog?

Since their first breeding 20 years ago, the tiny Teacup Maltese has captured the hearts of all those who encounter them.

Weighing in at less than 4lb, this teacup dog is half the weight of a standard Maltese dog weighing the equvilient of just two pineapples!

The Maltese origin can be traced back to Ancient Malta, where they were the lapdogs of royalty. As a result of this, they have maintained their luxurious look and attitude; these pups accept only the very best in life!

Teacup Maltese are often called “forever puppies” due to their tiny size and playful and energetic nature.

They are very loving dogs, caring deeply about their owners. Unlike a lot of other small dogs, it is uncommon for the Teacup Maltese to develop the small dog syndrome.

When it comes to grooming, there are two acceptable cuts of Teacup Maltese hair. The first, seen in the above picture, is called the “puppy cut”, and is the most common kind. The puppy cut usually leaves the fur around an inch long and is very low maintenance, requiring a brush every week or so.

However, the less common Maltese cut is much more work. Floor length, flowing white hair will require daily brushing to stop it from matting, and bathing to keep the pristine white color. This cut is much more commonly seen in show dogs than your average dog!

You may have heard of the Standard Poodle, even the Miniature or Toy Poodle, but, did you know about the Teacup Poodle?

This is the tiny Poodle dog, the newest member of the Poodle family.

These tiny puppies are taking the world by storm, growing massively in popularity each year.

It is important to note that the Teacup Poodle, like many other teacup breeds, is not recognized by the American Kennel Club (AKC) or any other Kennel Clubs.

Acknowledged as a non-pedigree version of the Poodle, due to the fact that the Teacup Poodle does not meet the size requirements laid out in the breed standard.

Their smaller size means that the Teacup Poodle tends to thrive in smaller sized homes, such as apartments. They need exercise like all dogs, but not excessive amounts similar to that of their larger relatives, so they make a perfect companion for anyone looking for a low maintenance cuddle buddy.

Originally, the Standard Poodle was bred to be a hunting dog in Germany. However, their much smaller teacup descendants make much better lapdogs than hunters!

Standing at less than 9 inches tall, these dogs are lovers rather than working dogs.

All the grace and charm of the Poodle in a smaller, much more manageable package – what else could you want in a dog?

The Queen of Teacup Dogs, what could be cuter than the already small and sassy Chihuahua? Why the Teacup Chihuahua of course!

These tiny dogs weigh less than 3lb and are smaller than 6 inches tall.

Don’t let their smaller size fool you though, Chihuahuas did not get the memo that they are little dogs. They are often noted for their tenacity and feisty nature, being fiercely protective of their owners.

Although Chihuahuas have the biggest brain to body size of any dog breed, they are not ranked as intelligent, ranking the 67th most intelligent breed.

Do not be fooled, these dogs will still run rings around any inexperienced owners. With consistent training, these dogs can be obedient, but the slightest waver in confidence and they’ll bounce right back!

Teacup Chihuahuas, like all teacup dogs, are very small and fragile in nature, and so precautions must be taken for their safety.

Due to their delicate build and tenacious personality, these dogs do not do well with children, and thrive in adult-only homes.

Their lower exercise requirements (15-20 minutes daily) make them a good companion for an elderly person who is looking for an extra-special canine companion.

No article on teacup dogs would be complete without mention of their health issues, more specifically their eating habits.

Smaller dogs, especially teacup sized, are much more likely than other breeds to develop hypoglycemia, or low blood sugar.

This condition results in seizures and can cause death if not treated correctly. To combat this issue, feed your teacup dog multiple small meals through the day as opposed to one big meal.

In addition, they do not do well with jumping on and off things, as what looks like a short drop to you could be lethal for a smaller dog! Any furniture that they are allowed on should have ramp access.

These dogs also do not do well with stairs and so should live in houses that are one floor and be carried where stairs are unavoidable.

You should consider both of these health points extensively before deciding to adopt a teacup dog.

Teacup dogs come in all shapes, sizes and colors. Each one as unique as the last, they are a much manageable version of their larger, more boisterous relatives.

For the most part, they do well in all environments, from the city to the suburbs, as long as the environment is puppy proofed first!

If you are looking for a family dog, perhaps consider:

If you are single or do not have children, perhaps consider:

Do you have teacup dogs at home? Are you thinking about getting one? Leave us a comment with your thoughts on these teeny-tiny dogs.