Hands up dog owners! How many of you have encouraged your dog to howl when you have guests over?

Whether you have logged onto YouTube for a siren video, or simply sat there and howled yourself, we all find it fascinating that dogs howl.

Some breeds prefer to howl (rather than bark), but why do they do it, and why do dogs howl at sirens?

Is it hurting their ears? Is it just specific sirens? Do only certain breeds howl?

To answer these questions, here is our overview of why dogs howl at sirens and how to train them to stop!

Why Do Dogs Howl At Sirens? 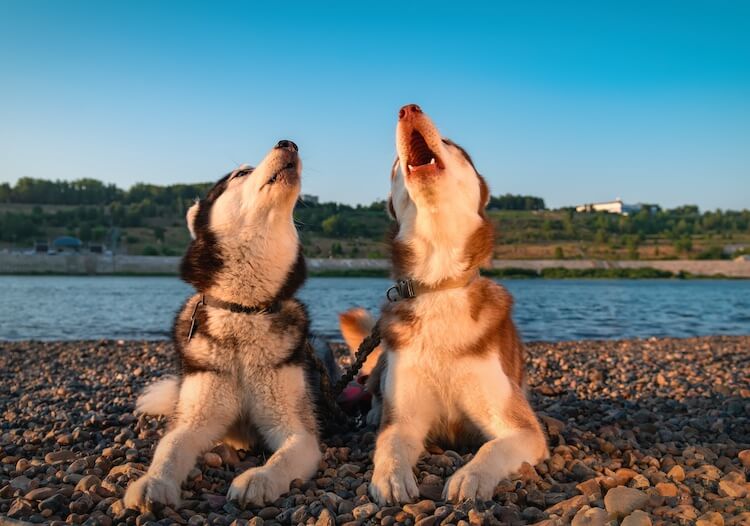 To start with, we need to understand the evolution of dogs.

Every breed of dog descended from wolves (even those flat-faced and toy breeds)!

Despite wolves being able to bark, you rarely hear them do so. The most common noise you will hear from a wolf, is a howl.

Wolves vocalize for a number of reasons, but often as a method to communicate their location (as a sort of GPS).

They would use it to alert other wolves of their location. So, if they were missing a member of their pack or seeking a member, they would howl.

While a dog’s bark is usually lower in pitch, a howl is a high-pitched sound; just like a a siren. This leads us to the first reason for why your dog is howling:

When a dog hears a siren, it is believed that they think it’s another dog; so, they howl back.

Which Breeds Howl At Sirens?

Now you understand why dogs howl back at high pitched sounds, this is particularly interesting when you consider the breeds which are most likely to howl:

Most of these dogs are often described as suitable for being the “only” pet in the home. Yet, by howling they actively show us that they want to cooperate with other dogs.

Does a Loud Siren Hurt a Dog’s Ears?

We mentioned earlier that some schools of thought have led to the idea that dogs howl at sirens because it hurts their ears.

Dog’s ears are more sensitive than human ears, they can hear higher-pitched noises that are further away, and are able to locate the position of the noise:

Their sensitivity to loud noises can mean than some noises, while well-tolerated by humans, may be scary to your pet.

However, studies show than yelps and groans are are indicators of pain in a dog.

Therefore, if the sirens were hurting your dog’s ears, we’d argue that they would be more likely to yelp and try to take shelter to buffer the noise.

Whereas most dogs will head to the door or window, happily sitting howling!

This leads us to the second most commonly through reason for howling:

Your dog howled once at a siren and, because as an owner you found it endearing, your dog then thinks this is what he should do when he hears a siren.

We know that dog’s learn through operant conditioning (i.e. their behavior is more likely to be repeated when a positive consequence is experienced), so your laughing and smiling provided positive reinforcement.

So, you have inadvertently encouraged their howling behavior.

How To Train a Dog To Stop Howling At Sirens: 3 Easy Steps 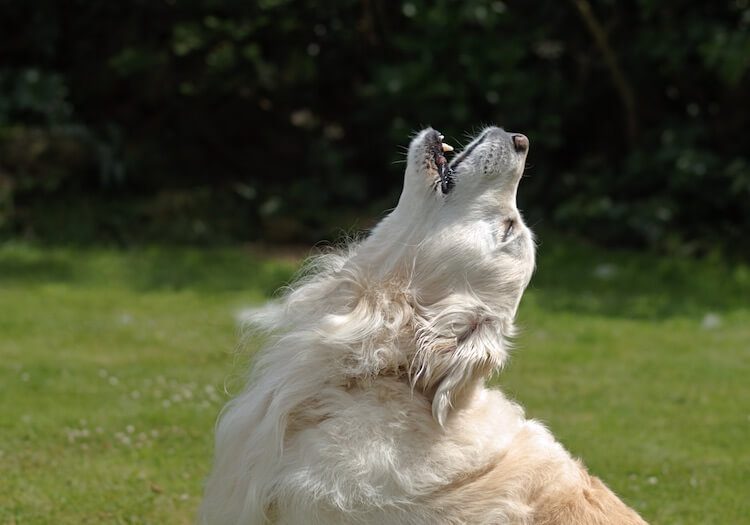 If you are not particularly happy about your dog howling at sirens, or you are worried about complaints from the neighbors, then you teach them to stop.

The basic premise when displacing a behavior, is to show your dog what you want him to do instead of howling.

There are two recognized techniques which can be used for displacement:

Teaching Your Dog To Settle

1. When it’s quiet (i.e. your dog isn’t howling and the chances of a siren are low), lure him to a rug and give him a chew to keep him there, busy and quiet.

Remember, this only works if you don’t have any other distractions at that time, so ideally when everyone else is out of the house.

3. Repeat this training regularly; you may need a few chews throughout the day over a few days. Alternatively, you can stuff a Kong with some healthy fillings!

Once he’s finished, use a release word “Finish!” but pre-empt it, so before he takes his own step to leave the rug you release him.

4. Slowly, move to chews that take less time to eat, but hold him on the bed or rug for a couple of seconds after he’s finished before you release him (by command).

You want to get to the stage where you can ask your dog to settle on his rug and he knows that this just means quiet time.

5. Introduce sirens via audio and practice your dog’s settle with distractions.

Start with a very low volume, providing he settles, you can increase the volume and time spent listening to it.

Then, hopefully, when you do hear that siren outside, you can ask your dog to settle, and keep those neighbors happy! 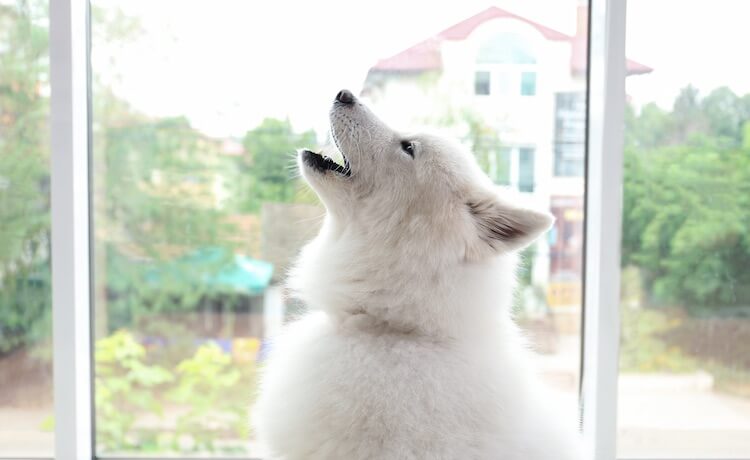 Does a Police Siren Hurt a Dog’s Ears?

There is little science that suggests a siren hurts a dog’s ear.

Whilst it is true that dogs have more sensitive ears to humans, all of the science suggests that dogs yelp or groan when they are in pain (as opposed to howling).

Why Do Some Dogs Not Howl At Ambulance Sirens?

Some breeds just aren’t that good at howling, so they may bark instead.

Modern dogs have evolved to live in our society, their vocalization has also evolved.

Their ear design (floppy or erect) will also affect how sensitive their hearing is, so you may note that floppy-eared dogs don’t tend to howl as much.

Why Do Dogs Bark And Howl At Sirens?

It is believed that wolves historically used howling as a way to alert others of their location.

Our wolf descendants (i.e. dogs) believe the siren to be another dog, so they are communicating with it. Howling is high-pitched – so is a siren!

Yes, there are certainly some breeds who are more likely to howl than others.

You’ll probably notice that northern breeds, that are the least removed from the wolf are the most common howlers; like Malamutes, Huskies, Northern Inuits and German shepherds.

It is believed that dogs howl at sirens because they believe they are communicating with other dogs (as the siren is high pitched).

The domestic dog, evolved from the wolf who used howling as a sort of GPS to alert other wolves of their location.

If your dog’s howling is causing a nuisance to your neighbors, you can certainly counter condition it by teaching them to settle.

Let us know how you get on in the comments!