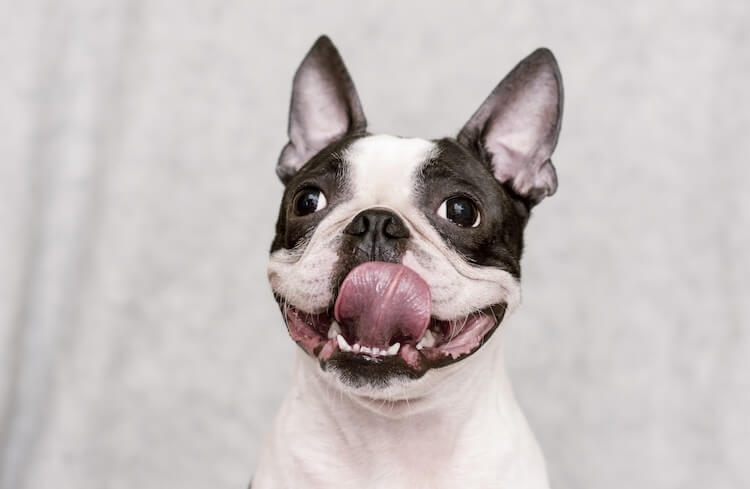 There is not a more dapper breed in this world than the adorable Boston Terrier.

This compact and portable pooch is always dressed to impress with its black and white tuxedo coat.

As the official state dog of Massachusetts, the Boston Terrier is truly an all American breed.

They are a light and compact canine, lending themselves to be a very portable dog in big cities.

First-time dog owners and families alike will adore this breed because of their low-care needs and sociable personality, impressing anyone with their happy, gentle demeanor.

Just as President Harding was ready to take on this lovable pooch, are you? 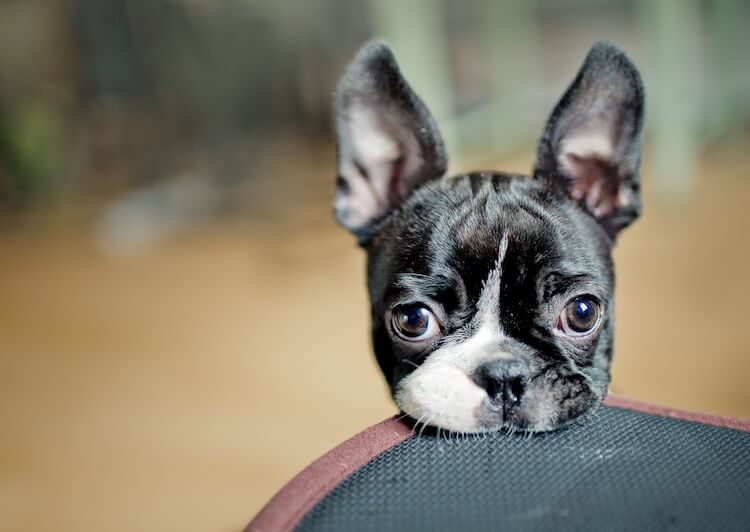 Recognized in 1893 by the American Kennel Club, the Boston Terrier is a true all American dog breed.

This breed is considered a Non-Sporting breed, which is a generalized group for breeds with varying backgrounds and appearances.

A non-sporting dog can excel in canine sports such as obedience and agility, while being wondrous family companions with their child-like, happy temperament.

Unfortunately, the Boston Terrier was born out of the bloody history of dog fighting when people wanted to see if they could make a dog versatile for rodent catching contests.

With these traits in mind, Englishmen bred the Bulldog and the White English Terrier together.

One of their offspring became the father of all Boston Terriers, as a Boston Terrier puppy was sold in the 1870s to a man living in Boston, Massachusetts.

From there, breeders liked this smaller dog’s appearance and started favoring the kinder attitude and gentle temperament.

Today, Boston Terrier dogs are a family companion that thrive around humans.

The Boston Terrier Club of America was founded in 1891, and has kept the fascination for this breed alive and well!

There are multiple affiliate clubs across the United States, Canada, and New Zealand. Other organizations such as the International Federation of Kennel Clubs and the United Kingdom Kennel Club also recognize this breed officially.

Boston Terrier rescues are not hard to find through the AKC or other associated clubs. Here are a few to get you started:

This high price tag is mainly due to the breed’s popularity and if the breeder uses a championship pedigree or not.

If the father or mother is a show winning dog, the price will go up.

Another factor that can increase the price is the associations the breeder is registered with.

Associations, like the Boston Terrier Club of America, will ensure high breeder standards, where the puppies and parents have to be health screened.

The Boston Terrier, being a smaller dog breed, will reach adulthood age between 1 to 2 years old.

Smaller breeds tend to mature much faster than larger breeds, at 8 weeks old, a puppy is about 1.5 to 4 pounds:

While originally bred as fighting dogs, the puppies that were produced were so sweet and kind that early breeders decided to breed them as companion dogs.

Generally, the Boston Terrier is happy and trusting of their owners; they thrive when they are able to be around their family and delight in meeting new friends.

This breed does have a stubborn streak in them. However, that can be managed through consistent training from puppyhood to adulthood.

Socializing your puppy early is extremely important for them to learn the social rules of dogs as well as humans.

This is the dog for a family that wants someone to entertain the kids and parents!

The Boston Terrier loves their family dearly so they might be a little jealous of other dogs or animals in the same household if socialization was not done correctly.

Being very affectionate, they sometimes get whiny when not getting their attention.

They enjoy playing with their friends and family, whether that be: fetch, wrestling, or being chased around the house.

Due to their short snouts, they tend to snort and huff to get the attention of others. This also lends to much more snoring than many other breeds when they take naps (so beware if you’re a light sleeper)!

Because of their high energy, the Boston gets very excited to play with other dogs.

But this may mean they’re a bit much around other dogs and people, so teaching them how to play with other dogs is necessary. 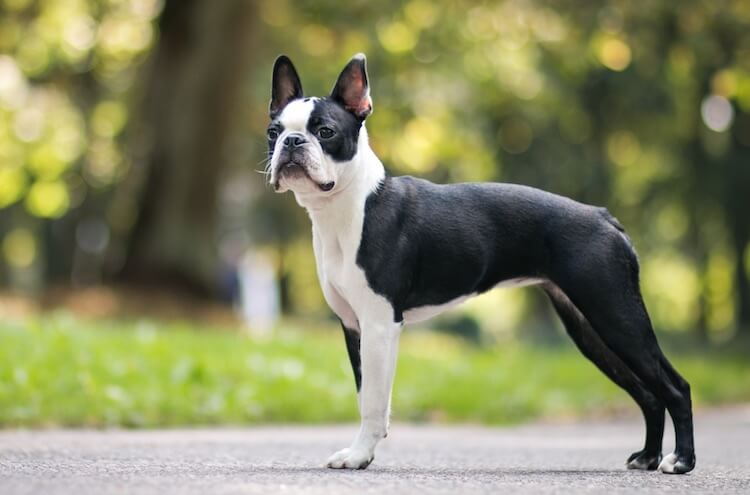 The Boston Terrier has a strong and compact body (which comes from the breed’s background of dog fighting).

Their broad chest, with strong shoulders, makes them top-heavy when compared to their smaller but muscular hind legs.

The official breed standard states they should be “short-headed, compactly built, short-tailed, and well balanced”.

A Boston Terrier does not have a long tail, it’s more like a small stub. They make up for their lack of a tail by wiggling their entire behind!

Male and female Boston Terriers are between 15 to 17 inches tall to their withers.

They both weigh between 12 to 25 pounds, and thus considered a small breed.

This makes them perfect for people who want a companion who can fit comfortably in a city apartment, or tag along as a wonderful travel buddy! 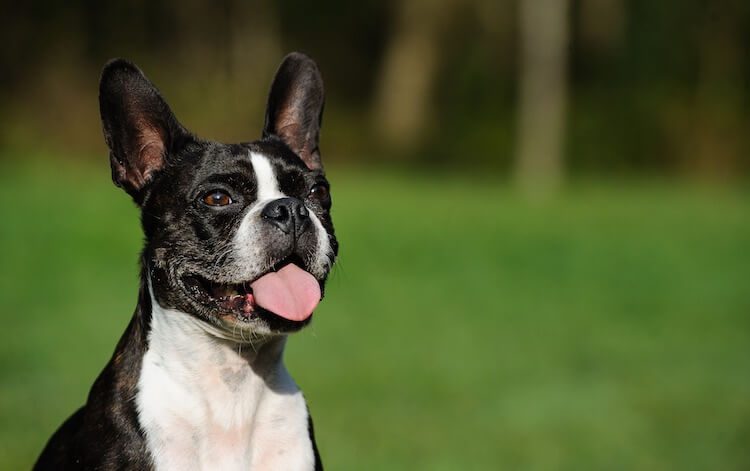 The classic Boston Terrier has black and white markings which make it look like this pooch is wearing a tuxedo.

But that is not the only coat they sport, they also come in other colors (such as brindle and seal), with the same white markings:

Typically, the ratio of markings favor one of these three colors over white.

The Boston Terrier’s front legs, chest, and face are white, while their ears, back, and hind legs are a solid color.

The Boston Terrier’s coat is short, smooth, and shiny with very minimal shedding.

With their single coat, this breed does not cope well in the cold, so they will need a jacket to keep warm. Although, this means they do have an advantage of staying cool in the summer.

When it comes to grooming, the Boston Terrier has relatively low maintenance requirements.

Their short, single coat is easy to brush, only needing a bath every once in a while, depending on their activity level outside the house.

Nail clipping should happen regularly (every one or two months) to avoid any discomfort and accidental injuries. You can clip them yourself, or allow a groomer or veterinarian to do so.

Teeth brushing should be done 2 to 3 times a week to maintain a low plaque level on your dog’s teeth.

Owners need to be aware of cleaning under the wrinkles of their Boston Terrier’s face.

Dirt and debris can build up under the flaps, which can lead to mold growing in those spots. Wiping their face a few times a week and a deep clean at the groomers will do the trick!

Caring For A Boston Terrier 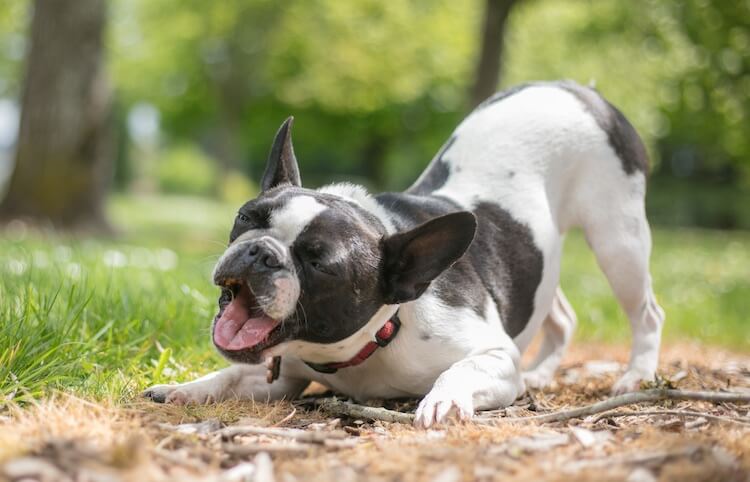 The Boston Terrier is a very low maintenance breed to take care of, especially for new dog owners.

By being small, you don’t need to spend your entire paycheck on dog food either, their exercise requirements are low too – only needing dedicated playtime with their owner and a short walk each day.

Dry food (i.e. Kibble) is best for oral health because the crunchiness of the food helps to clean teeth and does not get stuck between the teeth.

If your Boston Terrier is having any feeding issues, such as allergies or runny poops, consult your vet.

An important thing to note about the Boston Terrier is their nose.

This can pose a problem when eating because if your Boston Terrier eats too fast, they can choke easily. Special bowls and puzzle feeders are a great way to slow down a dog that practically vacuums down their food!

Overall, the Boston Terrier has a lot of energy that needs to be regulated so unwanted behaviors do not show up.

Exercising your pooch will not be an issue because they are a small breed that can easily worn out by a long walk or playing fetch.

Their solid stature and fast legs lend them to be a strong breed, so they can participate in a number of dog sports:

Regardless, this breed is a wonderful dog to teach all sorts of tricks to impress your friends and family, while providing enrichment for your pooch! 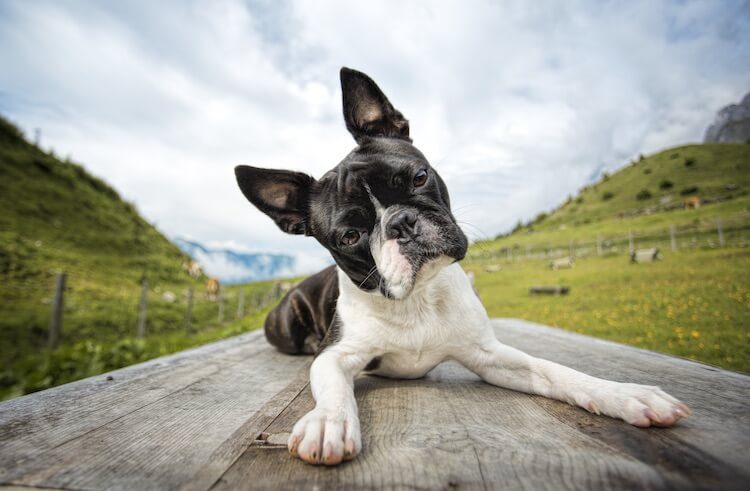 The Boston Terrier is a breed that loves to please their owners!

This makes training very easy because they will want to make you happy.

Positive reinforcement training is a must because this breed adores their owner so much that they are very sensitive to correction.

Reassuring your puppy with treats and affection when they do something right equals a very happy and willing dog!

Constant repetition of manners and tricks is a must to avoid any slip-ups.

Regardless, this breed is a wonderful dog to teach all sorts of tricks to impress your friends and family! Not only that, you can take them to agility courses or participate in trick competitions to show off all that training.

The Boston Terrier has a very healthy life span of between 11 to 13 years.

Many popular breeds around the world have faced immense struggles in recent decades due to enormous amounts of inbreeding that has led to breed specific diseases.

The Boston Terrier is no exception and, due to their very large eyes, are known to have many cases of eye related issues such as cataracts and glaucoma.

Another common issue with this breed is due to their brachycephalic head shape and shorter nose.

Because of their shorter nose, these dogs tend to have breathing difficulties and cannot regulate their body temperature as well as longer nosed dogs.

With this in mind, pay close attention to your dog when you are exercising them or when outside on hot and humid days to avoid getting heat stroke.

The Boston Terrier is a wonderful breed to be welcomed into your home as they are such a loving and intelligent dog.

Despite their rough origins, this breed has flourished in America by becoming a fantastic family companion.

With their short coats and small body, they are an easy dog for grooming and care; and you won’t break the bank feeding this small breed either.

The Boston Terrier truly has every advantage to having a dog in your home by being small, trainable, easy to groom, and even easier to love.

Let us know what you think!

Boston Terrier vs French Bulldog – Which Dog Is The King of Bull Breeds?