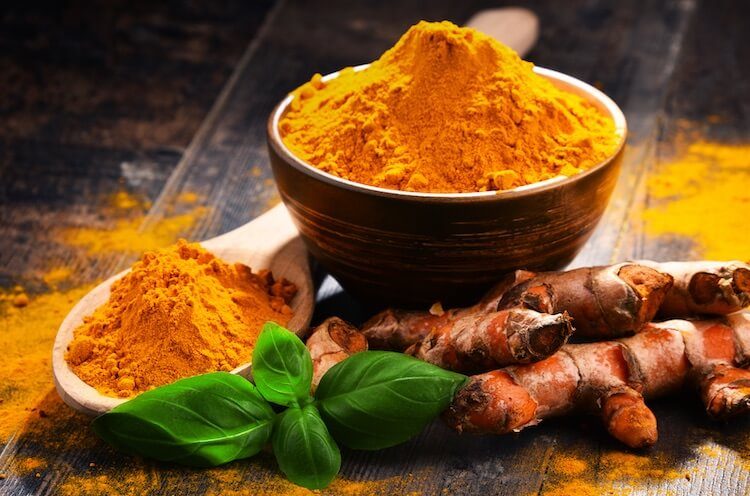 If you are looking for alternative ways to keep your dog healthy, you have probably come across the tiny but powerful turmeric plant.

A spice known for its anti-microbial properties, turmeric was first used for its role in reducing inflammation.

It has been touted as a must-have on owner shelves.

Keen to learn if this spice could help your four-legged friend?

Well, you’re in luck! We have compiled the ultimate guide to turmeric for dogs, from its uses, how to feed it, side effects, and health benefits!

Turmeric For Dogs… What Is It?

Turmeric is a flowering plant, but it’s the root we are most interested in. Part of the ginger family (scientifically known as Curcuma longer), it looks very similar to ginger, but the smell will help you tell the difference.

When boiled, dried, and ground, it has a warm, bitter, pepper-like taste with a mustard-like aroma.

Most importantly, turmeric has an active compound called curcumin which brings many health benefits for dogs.

Turmeric is frequently used in humans to help with a range of diseases and conditions including:

Curcumin specifically is argued to be anti-inflammatory, antioxidant, anti-microbial, anti-tumor, and also helpful in wound healing.

Used in Ayurvedic and Chinese Medicine for centuries, it is now finding a place in Western Medicine.

So it stands to reason that turmeric for dogs is also a potential treatment plan for many illnesses (see below).

Is Turmeric Safe for Dogs?

Yes, turmeric is safe for dogs.

Turmeric, and its active ingredient curcumin, has very poor bioavailability. This means it’s not well absorbed by a dog’s body.

It also has a high metabolism and elimination rate, meaning that it leaves their body very quickly.

For that reason, it has been found that for the most part, offering turmeric for dogs in golden paste has the best outcome (see our recipe).

How Much Turmeric Can You Give a Dog?

With the golden paste recipe, you should start slowly with ¼ tsp.

Provided it is tolerated and you notice health benefits, you can increase this from between one to three tablespoons of paste per day (some large dogs can take 3).

When you start increasing the amount of turmeric for your dog, spread the dosage throughout the day.

You are better off adding a small amount of turmeric in every meal, rather than one big dosage in the morning.

How to Make Golden Turmeric Paste for Dogs 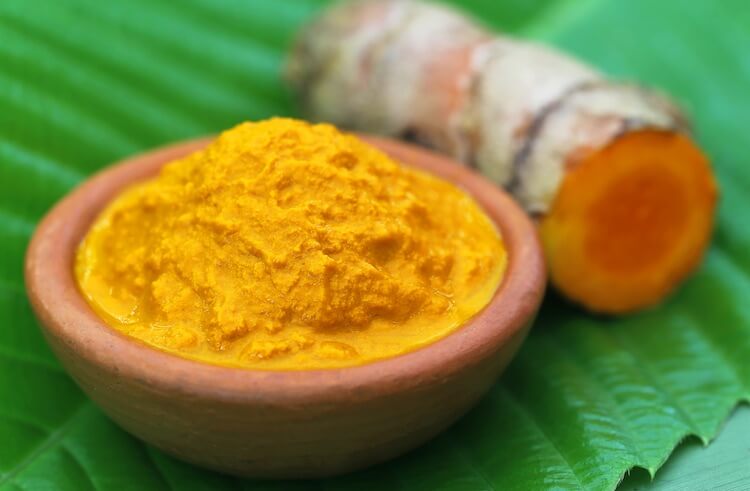 If your dog isn’t keen on the taste, you can purchase coffee bean molds (these work out as ¼ tsp per bean). Spread the paste into the molds and then freeze.

Once frozen, pop them out and smother in high-value food (e.g. peanut butter) before feeding.

Some dogs can develop a smell very similar to cat pee when they start on the paste, you can add 1 tablespoon of ground Ceylon Cinnamon with the coconut oil to combat this.

How to Make Turmeric Dog Treats

If your dog really isn’t too happy with the paste, so you could also make up a batch of tasty turmeric dog treats.

These dog treats aren’t great (in terms of monitoring calories and actual turmeric dosage), so if you want to give turmeric for dogs regularly, it is best to stick with golden paste.

5 Health Benefits of Turmeric For Dogs 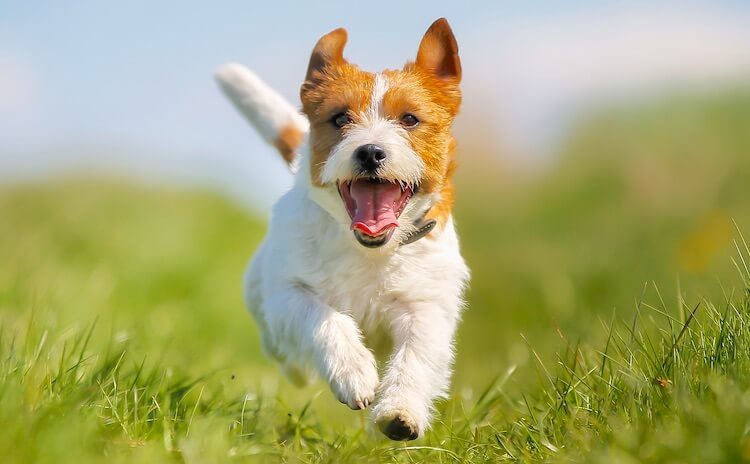 So, we have heard that turmeric can help with a range of health issues in dogs, but how and what?

Yes, it does. We are not saying it’s the cure for cancer, but numerous studies show how curcumin interacts with cancer cells and tumors.

Curcumin inhibits cancer development as it acts as a blocking agent.

Studies have shown curcumin has suppressed cancerous growth in a dog’s prostate, pituitary, and uterine cells. What’s also incredible is that it has the ability to sensitize cells to chemotherapy; making the cancerous cells more reactive to mainstream treatment.

Finally, its antioxidant properties could also help ward off the development of cancer in dogs.

4. It Can be Used As A Cyst Treatment For Dogs

A pocket of tissue that forms filled with fluid, pus, or air is known as a cyst.

Parasites can often be the cause of cyst formation in dogs.

Dogs are at risk of parasites and of course, being covered in hair, they run the risk of sebaceous cysts (in hair follicles). Female dogs can develop cysts in their reproductive organs too.

As cysts are generally caused by inflammation, so as an anti-inflammatory, turmeric is often used to help treat them.

This is the most common use for turmeric and golden paste.

Orthopedic conditions are incredibly common in large breeds in the form of the elbow or hip dysplasia.

Osteoarthritis is a degenerative disease. It is a chronic inflammation of the joints which causes pain, stiffness, swelling, and lameness.

Many owners opt to use golden turmeric paste as a long-term treatment to reduce pain and inflammation.

Many studies have shown that when supplemented with turmeric, arthritic dogs show a marked improvement in their daily life activity without any side effects.

Turmeric helps to moderate bacterial load within a dog’s gut, acting as a prebiotic for dogs.

It is well established that we need to balance the good and bad bacteria in our gut. This is the same in our canine companions too, especially when they actively seek to eat trash or food from the sidewalk!

Turmeric is also effective in treating inflammatory bowel disease too.

We have already noted its anti-inflammatory effects in cases of cancer and arthritis.

Further studies have shown curcumin (the active compound in turmeric) is beneficial in reducing inflammation post-surgery.

Side Effects of Giving Turmeric To Dogs

Whilst turmeric is generally well-tolerated, some dogs do have side effects with turmeric, most often sickness and diarrhea.

This is often due to increasing the dosage too quickly.

If your dog continues to have digestive discomfort, it may not be suitable for them.

There is also a consideration for dogs with pancreatitis being fed a low-fat diet.

Coconut oil (used to create the golden paste), in small amounts, won’t cause issues, but it is worth being mindful of.

One final consideration, turmeric is thought to be an anti-coagulant, so it is always advised to stop supplementation before or after surgery.

Is Turmeric Poisonous For Dogs

Turmeric is perfectly safe to feed dogs in measured quantities. By itself, this spice isn’t well absorbed, so it is best to pair it with the ingredients found in golden paste (see recipe above).

Where Can I Buy Turmeric From?

Like any food which has a medical benefit for your dog, turmeric supplements are largely unregulated.

It is therefore best to purchase turmeric in its original form from health shops and make the golden paste yourself.

How Much Turmeric Should I Give A Dog?

Start by feeding ¼ tsp of golden paste to your dog and increase this as he is tolerating it. Increase their dosage until you notice improvements, up to around 3 tsp for large dogs per day.

We think you’ll agree; this flowering plant is pretty impressive.

Turmeric is renowned for its anti-inflammatory, anti-microbial, anti-viral, anti-bacterial, anti-fungal, and anti-cancer properties!

Numerous studies have hailed its benefits, and although we interpret them in humans (as the studies are largely carried out on animals), it stands to reason we can transfer the benefits to our dogs too.

Many owners have already experienced the benefits, especially in inflammatory conditions like arthritis and pancreatitis.

Using turmeric to make a golden paste can certainly bring huge benefits to your dog.

As always, speak with your veterinarian before adding any supplements to your dog’s diet.

Why Do Dogs Eat Dirt? Is It Bad for Them?

Dogs are fascinated by many things; shadows, feet, trash, and yes, dirt. If you have ever cared for a dog, you will know they have quirky behaviors and frequently do things which confuse us! It’s all part of the deal you signed up for. Your Continue Reading →

Can Dogs Eat Pineapple? Five Rules You Should Know

A balanced diet containing all six essential nutrients is critical for your dog’s health. An imbalanced diet, or improper use of nutrients or supplements, is likely to cause your dog to suffer from health problems or stunt growth during your puppy’s first year. Vegetables, fruits, Continue Reading →