Are you looking for a dog to be the perfect companion – quiet, clean, small enough to live easily in your house without too many modifications? Answering yes to even one of those questions can mean that you are looking for a French Bulldog, one of the more popular breeds of companion dog one might find currently on the market.

The French Bulldog, or Frenchie, tends to be a rotund little fellow with a flat, rounded face and proportionately larger ears than one might expect in a dog of its size; the breed as a whole was originally intended to be a companion dog, and the modern Frenchie will actively seek out humans for attention and affection. Here, we’ll be discussing the Lilac French Bulldog, a rare subspecies of Frenchie with a distinctive dark coat and blue eyes. A specimen with strong breed characteristics is considered a rarity among dog owners and can cost well over $5000 USD per dog.

A Lilac French bulldog shares the approximate size and weight of an ordinary Frenchie, standing approximately a foot tall at the shoulder and weighing somewhere in the neighborhood of 20 pounds. They tend to have a bowlegged appearance and gait, and large, erect ears instead of the floppy ones one might find on an American or English bulldog.

Naturally, the most important physical characteristic of the Lilac French Bulldog is the coat, which will appear as ordinary black at a young age but will lighten over time to the violet hue that gives this breed its name. The Lilac Frenchie retains the short, fine hair of its cousins, and will exhibit pink skin at the eyes, ears, and other delicate areas to which the fur does not fully extend.

The Lilac French Bulldog has a comparable temperament to ordinary Frenchies; it has no objection to being cuddled and moved about, and in fact, will often approach humans in search of affection. These dogs do tend to be relatively sedate, and are generally uninterested in vigorous playtime or extended walks; owners of a lilac French bulldog should take this into account when constructing their pet’s diet and exercise routine, as it has significant implications for the dog’s weight.

French Bulldogs were originally bred as companion dogs in western Europe in the 1800s when British Bulldogs were legally banned from ‘blood sports’ and began to be cross-bred into a ‘toy’ dog that would be more realistic to keep around without it being used in prizefighting. The Frenchie gets its name from the 1850’s trend that saw them introduced to France, where they rapidly gained popularity as a fashion item among higher society and in brothel districts. Their calm and agreeable nature made them highly sought after by artists, nobility, and drama directors who needed a dog for their plays.

Lilac French Bulldogs are a more recent addition to the genetic line, produced by careful pairing of those dogs with a distinctive purple or bluish sheen to their coat. While these dogs are in many aspects identical to the ordinary French Bulldog, this coloration is still recent enough that it is considered a defect by most breeding authorities. The American Kennel Club, one of the most respected organizations for the certification of a dog’s pedigree, has yet to approve the Lilac French Bulldog as a separate breed, and instead considers it a mutation of the French Bulldog canon.

Caring For A Lilac French Bulldog

Lilac Frenchies are for the most part the same as other small breeds of dog, in that they will need a smaller calorie intake and a scaled exercise routine. One should not expect or encourage a Frenchie to try the same high-endurance training or agility courses as would be used for working dogs or large breeds. Your Lilac Frenchie is best exercised with long walks on moderate terrain, or a treadmill set to match their brisk walking speed. As they are not the most athletic of dogs, the French Bulldog should not be put through jumping, turning, or climbing obstacles unless they are specifically labeled as suitable for a small breed.

Even if the exercise apparatus is suitable for small breeds, it is important that you never force the dog to work too hard on them. If your dog begins to exhibit disinterest or try to lie down in the middle of a routine, it is likely time to give the dog a breather until they are ready to work again. Most Lilac French Bulldogs will only need to be exercised once a day, so if you have already had them on a treadmill, for example, there is no need to make them get on again.

A Frenchie should be served a low-fat diet to compensate for their sedentary lifestyle, so check with your local pet supplier to find an appropriate food choice. Dog food tends to be labeled with an incredible number of variables, so you should be able to find a kibble optimized for a French Bulldog with relative ease. Even setting aside kibbles marked for use only with one particular breed, you can still check general-purpose kibbles; most are cross-referenced for breed size, the age of the dog in question, and what lifestyle or stage of life is required.

Keep in mind that many French Bulldogs suffer from excessive flatulence, especially if they are not getting enough exercise or have some kind of intestinal parasite. This can result from an unadvisable choice of diet or from the dog’s natural allergies, and addressing either one can help reduce or eliminate the problem. In terms of diet, you’ll want to select a medicated food with probiotic additives that help invigorate the dog’s digestive process to minimize waste. Allergies may be treated with hypoallergenic food, increased care about exposing your dog to allergens, and a number of over the counter or prescription medications.

Keep in mind that even over the counter medication should be used only with veterinary advice. Medicine doesn’t need to be prescribed to do your dog considerable harm. Make sure that your dog actually has the condition you suspect before administering any medication and monitor them closely afterward for side effects.

Medicating a small breed dog is always a challenge, and the French Bulldog is no exception; because most medicines are calculated by body weight, the quantities needed for safe use in a small breed can be so minuscule that they are not always readily available. If your dog needs to be put on any kind of continuous medication, it is worth the trouble to weight them beforehand to determine what dosage will be needed and to thoroughly check each package of medicine to ensure that it is safe for use in dogs of your pet’s size and age.

Topical medications for a French Bulldog are of particular interest due to the breed’s distinctive flattened face and thick, folded skin. These features can cause a number of conditions not found in dogs with more elongated snouts and tighter skin across the jowls, including loss of fur and fungal infections inside the folded skin. Topical medication, if it needs to be applied to the entire body, must be carefully worked into all the folds and creases on the Frenchie’s chin and neck to ensure a complete and effective treatment.

Lilac French Bulldogs, in particular, have a thinner coat than the mainstream breed, making their skin particularly vulnerable to such things as sunburn or thorns. Combined with their short, fine fur, your French bulldog will have relatively little to protect itself and will need to be kept safe from sharp edges and irritants such as household chemicals or poison ivy. A more astute owner will notice that they have particularly delicate skin around the eyes, nose, and cheeks, even more so than most dogs. Their skin is exceptionally sensitive and needs to be treated with extra delicacy to avoid harming the dog in the course of grooming.

As the French Bulldog has such a thin oat, there is no need for a stiff brush or steel comb, even when the dog is shedding. Select instead for grooming gloves with silicone pins that will allow you to feel exactly how much pressure you are using and protect the dog’s skin even if you do push a little too hard. For the delicate areas mentioned, even this might be too much; instead, use a non-toxic baby wipe, and make sure that you have thoroughly cleaned and dried in the notoriously difficult wrinkles on the dog’s jowls.

Socializing With Your Dog 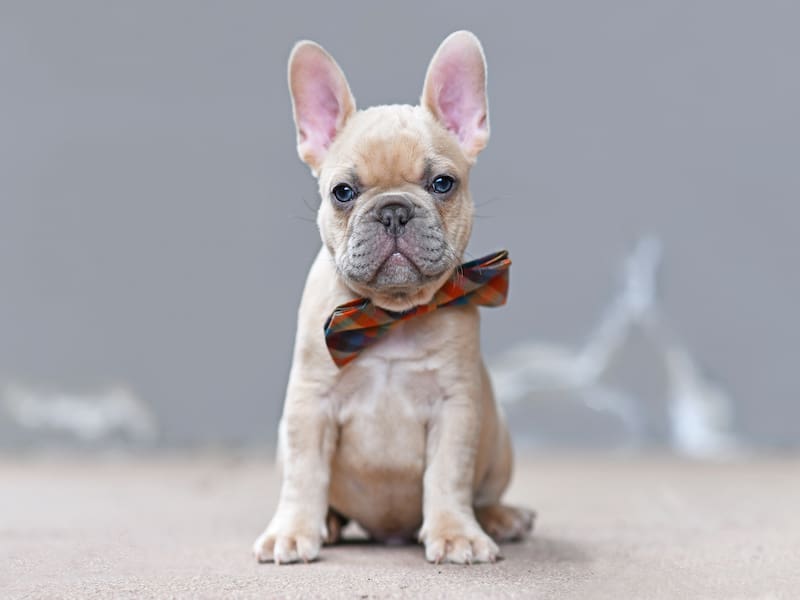 The entire breed of French Bulldog is a companion breed, intent on close contact and continual connection to their owner. The Frenchie will tend to follow you if not actively prevented, and will take any opportunity to snuggle up to you or sit on your lap. For all that, they are a generally sociable dog and will happily greet other breeds if given the chance. Other humans may evoke a certain amount of caution at first, but the Frenchie is usually quick to adapt unless the people in question actively push it away.

A French bulldog will get excited easily if it sees large numbers of people, and may express itself with frantic running about, yelping barks, or jumping up and down. If possible, stay with your dog and try to comfort or quiet it down, as this provides an excellent bonding experience for both of you; if not, pick it up for a short while before removing it to a room with fewer people and some toys or treats to distract it. 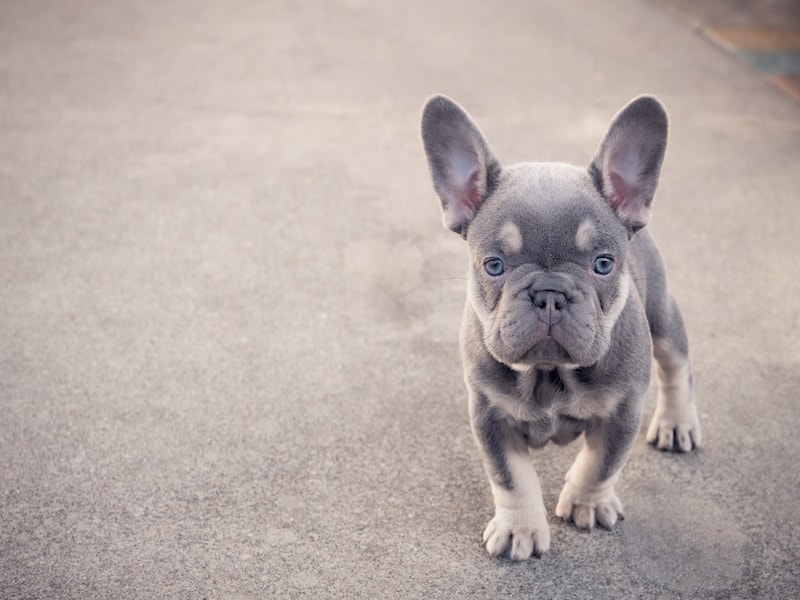 The benefits of a French Bulldog of any breed are fairly straightforward; as a breed made to be the ideal companion dog, it is easy to care for and fun to have around the house. Their small size makes it possible to travel with one, and they are neither hyperactive nor overly aggressive, both of which can be serious turn-offs for someone trying to decide which breed of dog to get.

As for downsides, the French Bulldog may be a good companion, but it is hardly much more. The French Bulldog does not have the physique for a show dog, nor the aggressive nature and territorial drive that one would look for in home defense. They are also unsuitable for nearly any kind of work, as their small size and skeletal structure do not allow them to exert any particularly impressive force. Even rat catching, one of the original uses of the bulldog, would be beyond the French bulldog, as its jaws are too small to seriously damage a mouse should it catch one.

Lilac French Bulldogs enjoy one additional upside, that of their eponymous purple coat; this can make them a talking point among fellow dog owners and is considered a prized aspect of the breed. Unfortunately, there is an ugly truth to that as well – barring a serious change in their policy – a lilac Frenchie will not pass the breeding standards of the American Kennel Club or other such breeding authorities.

The Lilac French Bulldog is a fun dog to have around and can be an endless source of affection, companionship, and heartbreakingly cute behavior that is sure to delight family and friends alike. Although not the ideal dog for certain applications, the average homeowner will find them an easily managed and enjoyable pet to have around.