Sleep is an essential part of your puppy’s life, even more so than food, but how much do they need and why is it so important for their development?

Let us take a trip back to the late 1800s, an era when we hadn’t made much progress with animal testing as we have today. Dr. Marie De Manaceine was fascinated with sleep deprivation, she had established that mental disturbance resulted from partial insomnia, but she wanted to know more.

In Dr. Manaceine’s Lab, she recruited ten puppies aged 2, 3, or 4 months old. While they continued to be fed by their mother, she kept them in constant activity (deprived them totally of sleep).

What is interesting, is that when puppies were starved, they could be saved after 20-25 days. This wasn’t possible when they were sleep-deprived.

Why Is Sleep Important For Puppies?

The brain is the command center for the nervous system. It is divided into three main sections:

We know how a diet limited in lipids can detrimentally affect the brain and contribute to neurological disease, but sleep deprivation had a worse impact on these puppies.

Many studies since Dr. Manaceine’s, have demonstrated that sleep loss during puppy development can result in reduced brain mass, neuronal death, and subsequent behavioral problems. Impaired sleep in puppies is also a contributing factor in cases of cancer and type II diabetes.

Sleep is essential to your puppy’s life. Without it, it massively affects the control center (that is their brain) and can cause a range of consequential health problems in their juvenile years

Puppies undergo much more rapid development than the equivalent human child; for example, the average 7-week old puppy is as developed as a 9-month old human baby. Dogs are also said to be fully matured anywhere between 1-2 years of age (depending on breed).

For a puppy to reach maturity (both healthy and happy), sleep is necessary for their cognitive changes, emotional challenges, and physical transformation. Puppies use sleep to consolidate what they have learned that day. Whether it is a new trick or simply to avoid chewing the legs of the chair.

Because of the huge amount of developing puppies need to do in such a short period of time, they spend most of their first two-months, asleep.

Adult dogs, in a laboratory setting, when left alone, will sleep on average for around 13 hours per day. Dogs are diurnal, which means they are active during daylight hours.

Rest occurs during dark periods with activity increasing the two hours before light; they have a natural rest period around noon and then reduced activity during the afternoon.

Puppies can sleep for anywhere between 18-20 hours per day. You will notice higher activity levels in the morning followed by a rest, then reduced activity around noon and into the afternoon.

They will sleep generally after they have been playing, learning new skills, been out for a walk, or have just eaten food.

The experiences that your puppy has during the day can affect the type and quality of sleep they have. Studies have found that after a negative experience, puppies will fall asleep more quickly. This is known as protective sleep and is a response to high-stress levels.

It is sometimes easy to attribute an “exhausted” pup to the busyness of the day. Be mindful, as their sleeping habits could be more indicative of their experiences.

Many new dog owners enforce “official sleep time” during the night. Where you want your puppy to sleep is a personal preference. Some owners opt to crate train their puppy and some are happy having them sleep in bed with them.

Crates are great for keeping your puppy safe and can help to build positive sleeping habits. It can be beneficial to set up a safe space for your puppy to help keep them out of trouble as he learns to associate space with sleep and calm.

Many puppies are good at self-regulating their naps especially if you are thoroughly unexciting and boring. The important thing is if your boy is due a nap and he’s wild, offer him a calming task and be totally quiet and calm.

For a large part of your puppy’s life; they will only be awake for between four to six hours a day. You should keep this in mind when planning their training and socializing.

Any training session should be kept short, it is important to not overwhelm them as we know negative experiences can impact their development and their quality of sleep.

How Much Do Puppies Sleep At:

Your puppy needs 18 hours of sleep each day!

How To Help Your Puppy Sleep More

If your puppy is struggling to sleep, it is likely associated with his emotional state.

When he was born, he was in a litter with his siblings and Mom. Suddenly, he is brought home and is expected to sleep alone. This is a large adjustment that can take a few weeks or months. For some puppies, having another resident dog already in the home can help them settle, but if they are an only pup, then you may want to start their nights with you:

The point of both techniques is that your pup knows you are close.

Slowly, you can move the crate out to just outside your bedroom door, and then finally downstairs. Or if you are on the sofa, maybe move to a sofa in another room before you head upstairs.

There is no evidence to suggest that being close to your puppy causes later separation anxiety. Quite the opposite is true; when your pup is content, he is more likely to be emotionally stable.

Just as we would as humans, good sleep hygiene is crucial in helping develop good puppy sleep habits. Routine is essential for puppies. Feed times are a good staple, try to stick to regular mealtimes, but don’t worry too much about walks and play at the exact time each day.

The other part of your job is to ensure quiet time before bed. After their evening meal, you may do some calm obedience training if you want to, but for the 1-2 hours before bed, they should be relaxing just as you would.

Finally, making sure he has had enough exercise and play for the day is important. Exercise is essential in promoting good sleep, reducing destructive behaviors, and bonding with your pup. 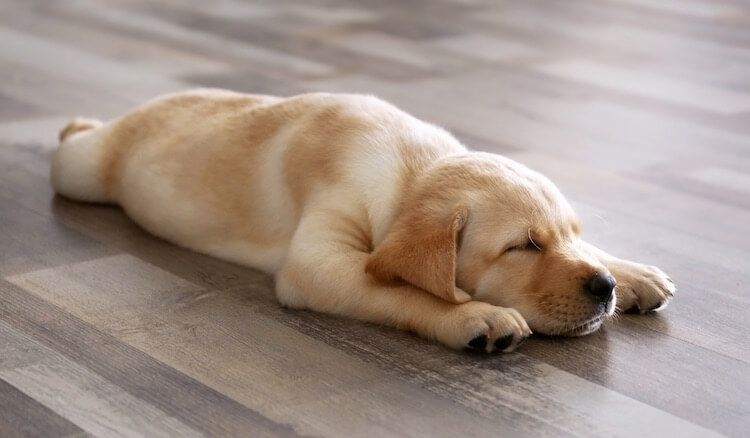 What Age Can Puppy Sleep Through The Night?

The issue with sleeping through the night has little to do with time, it’s all about bladder control.

Dogs and are diurnal, so they are instinctively more likely to be awake during light hours and resting during dark ones. Pups are more likely to be able to hold their bladder when inactive, but there is a rule of thumb when house-training.

Puppies can hold their bladder for one hour every month of age. When you bring your 8-week-old puppy home, letting them go more than two hours without a toilet break is guaranteed to end up with an accident.

To start with, when you are toilet training, it is a good idea to set your alarm during the night to let them out to potty. Slowly the alarm can get later and later as they grow. Remember, let him out after play, food, and sleep!

Why Does My Puppy Sleep So Much?

Your puppy undergoes a huge amount of development in a very short period of time:

Sleep is an essential factor in all of these processes. Your puppy is doing the development equivalent of an 18-25-year-old human in around two years. It makes a lot of sense why they sleep so much.

What Happens When Puppies Don’t Get Enough Rest?

In humans, lack of sleep is a major stressor. It wouldn’t be too much of a stretch to suggest similarly for our canine companions.

If you want your puppy and subsequent adult dog to be an emotionally stable and well-rounded canine, who happily engages in enrichment and grooms themselves, they need enough sleep.

Why Won’t My Puppy Sleep At Night?

If your puppy is waking in the night, he could need the toilet, or again, he could have just suddenly realized he’s alone. Let him out to the toilet, but don’t engage in play. Stay calm and praise him when he toilets. Bring him back in and calmly put him back to bed.

If he is frequently waking in the night and toilet breaks don’t seem to settle, it could be worth retracing some steps to where you are closer to him again.

What Time Do Puppies Wake Up?

Dogs are diurnal, they wake during light time hours, and rest during dark periods.

It is normal for them to wake as soon as the sun comes up. This is the basic mechanism of the circadian rhythm.

If your pup is waking with the sun, then consider moving their sleeping space to a room with blackout blinds or curtains.

Ask any puppy owner and they will tell you that their own sleep cycle adjusted massively when they first adopted their canine:

Some experienced owners will opt to get a puppy at certain times of the year, so it could be worth considering if you think you will struggle with early mornings.

Sleep is an essential part of our lives, this is no different for your puppy either. When young, your pup will spend the majority of their day asleep. Anywhere between 18-20 hours is completely normal and is nothing to worry about.

An extreme lack of sleep can be fatal for puppies and any form of sleep deprivation has negative effects on cognition, development, behavior, and emotional stability.

If we want a fully matured, healthy, and emotionally-stable canine, we need to let sleeping dogs sleep.

Consider how you plan training and socializing for your pup as it’s super easy to overwhelm them in those few hours they are awake.

Teach everyone in the family the importance of letting your pup rest. Set-up a safe space, somewhere he knows is calm and quiet, and can retreat to when the world gets a little too exhausting!

If you notice a sudden change in his sleeping habits, then pop a call to your veterinarian.

If you are looking for alternative ways to keep your dog healthy, you have probably come across the tiny but powerful turmeric plant. A spice known for its anti-microbial properties, turmeric was first used for its role in reducing inflammation. It has been touted as Continue Reading →

The short answer is yes, dogs can eat broccoli However, there is a lot more to the story than that. Firstly, just like humans, dogs have daily nutritional requirements, whatever you decide to feed your pooch will affect these levels; whether it’s good or bad. Continue Reading →