Coprophagy is the technical way of saying a dog’s tendency to eat their own or other dog’s poop, and it is more common than you may think!

Interestingly, in the 1940s and 60s studies on rats suggested that they eat their own poop due to vitamin synthesis.

Because of these studies, many dog owners assume dog’s eat poop because they are deficient in something. But, they are wrong.

There’s a little more to this pretty gross habit, so let’s delve a little deeper…

Why Do Dogs Eat Poop?

Some vets argue that it is a sign of an underlying medical issue such as pancreatic insufficiency; this is where there are missing digestive enzymes which affects your dog’s ability to absorb nutrients.

If your dog is showing other symptoms of malnutrition alongside coprophagy, then you should seek veterinary advice.

However, in most cases the reason behind why do dogs eat poop is not a health issue, but more a psychological issue.

Studies have noted that it can occur in bored dogs because they are either amusing themselves or seeking attention.

Many owners don’t like dogs eating feces, so when they spot it, they give their dog attention despite it being a negative interaction.

However, in order to get a handle on the true reason, a study was conducted that looked at the diet of dogs eating poo. The study focused on house-training, the dog’s eating habits, and what behavior modifications had successfully been used.

This study found that the diet of the dog had no significant impact, suggesting no nutritional basis for the behavior.

Additionally, it found that dogs eating poop were just as easily house-trained as non-coprophagic dogs and still maintained a typical aversion to poo.

Interestingly, dogs who ate their own poop, were more readily described as greedy eaters and the success rate of behavior modification to stop them was close to zero.

It doesn’t appear to make a difference whether they are eating their own, or another dog’s poop – if they are going to eat it, they will!

Why Do Dogs Eat Cat Poop?

Let’s see if a dog’s like of other animal’s feces sheds any more light on the reasoning behind this behavior. 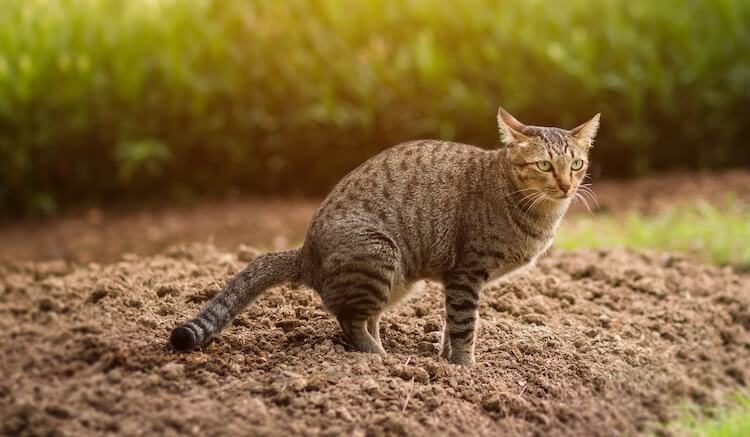 The most likely explanation is that whatever hasn’t been absorbed by the cat during their digestion, attracts the dog.

In some commercial cat foods fats are added to make the food palatable. This fat isn’t always absorbed by the cat, so it just comes out the other end.

Fats are often added for palatability, and cat feces usually contains some fatty material. Just remember, fats can be both good and bad, depending on the source!

Why Do Dogs Eat Deer Poop? 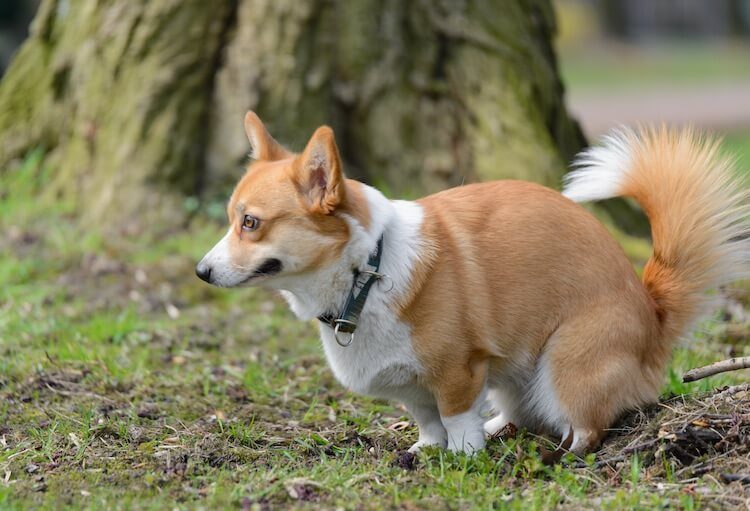 When you are out on a walk with your dog, he will probably find deer or horse poo. But, why is he drawn to it? The explanation could lie in their plant-eating habits!

There is little consensus on why dog’s eat grass. But, with horses and deer being herbivores scientists wonder if two are linked? Dogs may actually be seeking the plant content of a deer’s feces.

The answer to this question takes us back to our dog’s ancient beginnings.

Historically plant eating played a role in controlling internal parasites. Plant material passes through the intestinal tract, wrapping around worms and thereby clearing them out.

The parasites would then be found in the feces, which leads us to another reason why a dog would eat poop, to keep their den clear of parasites.

This is especially common in young puppies who would excrete in their whelping box and their mom would eat the poop to remove it.

Why Do Puppies Eat Poop? 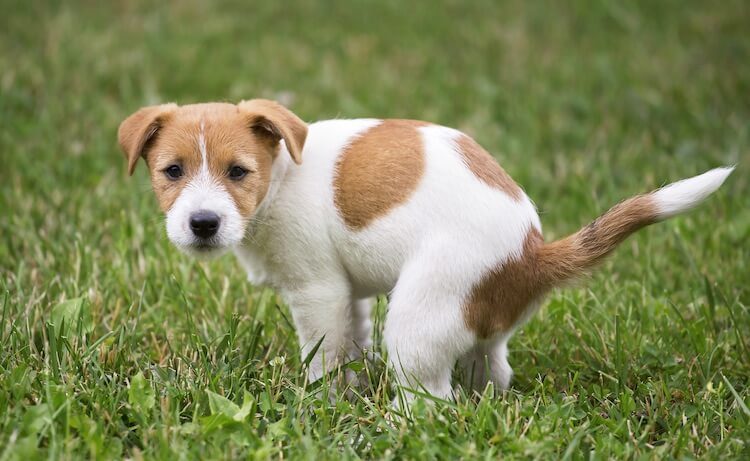 This leads us to the lovely trait that many puppies have, eating poop! It doesn’t matter to them, their own, another litter mate’s, their mom’s and even another animal’s feces.

Is this a copied behavior from their Mother? Or, are they just being puppies?

Most puppies will go through a poo eating stage. Vets and researchers agree that this just part of their adventure and exploration phase.

Much like babies, puppies explore everything with their mouth, just look at the hands and ripped trouser legs of any new puppy owner!

Although common in some puppies, studies have shown that coprophagy is not a defined juvenile behavior and is just as common in senior dogs.

It is also not affected by the age of separation from the Mother, which is sometimes suggested as a reason.

If your puppy is eating poop, he will most likely grow out of it as he matures (between 12 and 18 months of age).

However, if he maintains the behavior into adulthood, he will probably continue for the rest of his life: unless you intervene.

How Can I Get My Dog To Stop Eating Poop?

Unfortunately, many behavior modifications have been ineffective at stopping this behavior for senior dogs in the long term. Whilst there may be a slight reduction in frequency for a short period, the behavior often returns.

Food additives and pills have been used to stop the behavior and have had a very low rate of success (between 0-2%).

Other methods to prevent the behavior have included: chasing away from stools and lacing stools with pepper. The reported success has been 1-2%.

The best option for stopping a dog from eating poop is to teach the “leave it” command which yielded a 50% higher success rate.

Teaching the “leave it!” command:

The hope is to be able to ask for the behavior, and then your dog performs it. He learns by ignoring the good thing, he gets a good thing anyway. So, if he ignores poop, you need to reward him for doing so.

As there is little evidence suggesting a nutritional deficiency for eating poop, it serves no real purpose adding supplements to your dog’s food.

If you are concerned about your dog’s nutrition, then speak with a nutritionist or your veterinarian. Blood tests can be carried out to monitor major deficiencies.

Is Eating Poop Bad for Dogs?

Any poop will contain a bacterial load. So, for those dogs with weaker digestive systems, this could cause gastric upset. However, coprophagy is more common in greedy eaters and dirt eaters, so chances are, they’ve already got an iron gut!

The answer will also depends whose feces they are eating; what the host has eaten, whether they have been given any medications or antibiotics and ultimately the composition.

Interestingly, fecal transplantation has been an effective treatment in some gut disorders in dogs.

A transplant is where a sample is taken from a healthy donor and then orally administered to a sick patient. In cases of colitis and diarrhea in dogs, improvements have been noted within 2-3 days of the transplant

It is thought that the healthy sample repopulates the gut, enabling a dog to cure their own gut disorder.

That said, those samples will have gone through rigorous screening, so we are not saying you should go and let your dog eat every feces he sees!

Rats and rabbits are routine poop eaters; they need to for vitamin synthesis. But your dog is not a rabbit or a rat.

Poop eating is relatively common in puppies, it seems to be part of their adventures! They use their mouths to explore. But most puppies grow out of it.

The most common reason for why dogs eat poop is most likely to be they are a greedy eater, a hound, a terrier, a dirt eater or a multi-pet home occupant!

There is little evidence suggesting a nutritional basis for this behavior, but it can be a symptom of a health issue, especially if paired with other signs of malnutrition.

Some vets argue this behavior is psychological. Meaning, your dog is bored or attention seeking. Others suggest it’s more ancestral because dogs would have eaten poo to keep their den clean and clear of parasites.

There is little success in preventing the behavior via pills or medications. Likewise, chasing dogs away from stools or punishing them for eating it only gives them the attention they desired. You are better teaching the leave it command.

Whilst it’s not the most attractive trait for a dog to have, it’s posing little risk unless they are eating the feces of animals fed large quantities of anti-biotics or pesticides.

Those puppy dog eyes are looking up at you again; you know your faithful friend wants some of that shrimp you are eating. As much as we know we should not give large amounts of table scraps to our dogs, we often wonder whether just Continue Reading →

Why Are Dogs So Loyal? The Scientific Explanation

In 2020, pet owners in the US spent a whopping $103.6 billion dollars on pet, food, veterinary care, boarding and grooming. Us dog owners hear it all the time, “You’ve spent how much on a dog bed?”, “How many toys does Fido need?”.  The typical Continue Reading →