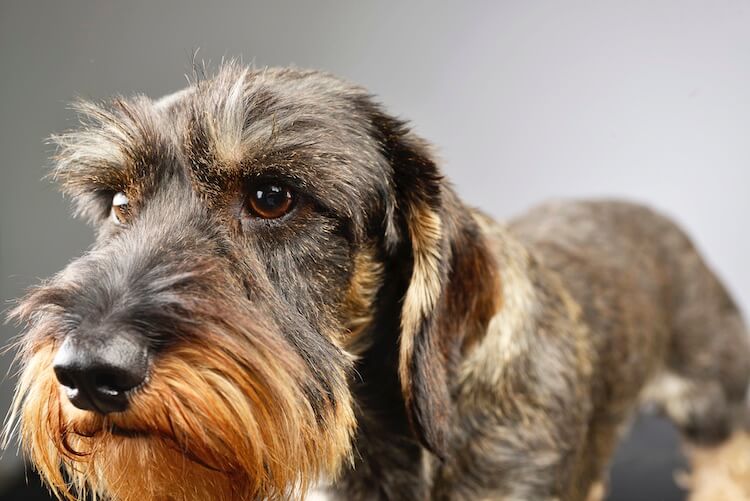 The Wire Haired Dachshund is a brave, intelligent dog with plenty of muscle!

Fist bred in Germany to hunt badgers, they were also used to hunt in packs to kill wild boar.

In modern times, they are the 13th most popular breed in the United States and are loved for their unique appearance and intelligence.

Their elongated backs and tiny legs are what has given them the nickname “wiener dogs”.

This Dachshund is suitable for apartment style living and family life, as long they are getting a good amount of exercise outside of the house.

If you have the time to put into their exercise and training, then keep reading as this little pooch will be the perfect fit for your family. 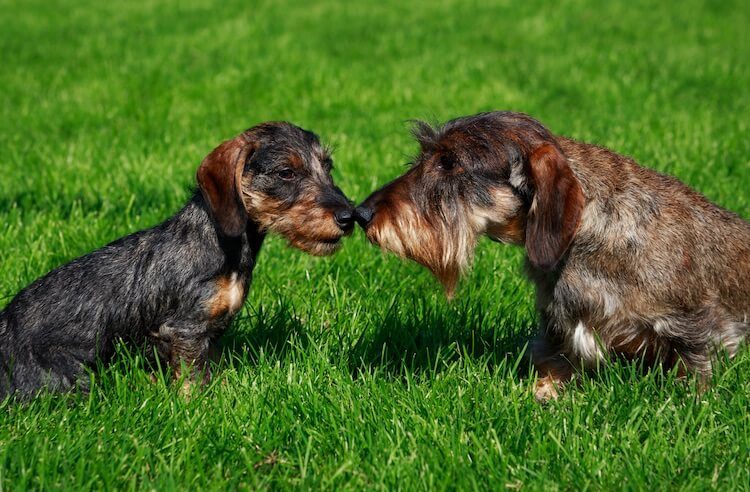 This breed is so popular that they have been recognized since 1885 by the American Kennel Club, and have only continued to grow in popularity since then.

The Wirehaired Dachshund is part of the hound classification of dogs and are used for hunting.

Now, they are mostly used for companionship and are a staple sight in urban living with families.

They are best known for their long backs, short arms and legs, and deep chests.

The German word Dachshund literally translates into badger dog, and was bred to be able to dig into badger holes to run them out for their badger-hunting owners.

Along with their determination and cleverness, they also have a signature loud bark that was used to mark their location while their owner looks for the badgers running out.

The Wire Haired Dachshund variation specifically was bred for running through thicker shrub patches as they hunted.

Along with hunting for badgers, there have also been documented cases of packs being used for hunting down wild boar too.

The Dachshund is a national symbol of Germany, and this garnered them the nickname “Liberty Dogs” during World War I.

The Wire Haired Dachshund, and the other two coat variations (i.e. short and long-haired), have been recognized by the American Kennel Club since 1885.

Well before their official Kennel Club recognition in 1885, this breed was very popular in the United States (and that has only continued to grow).

There is also a Dachshund Club of America, in which the wire haired is recognized, so if you are looking to adopt a Wire Haired Dachshund rescue, there are several well-known and reputable shelters that take in these pups.

If you would like to purchase a Wirehaired Dachshund puppy, it is extremely important for you to find a responsible breeder, as the genetics of this pet can greatly hinder them (read the puppy section below). 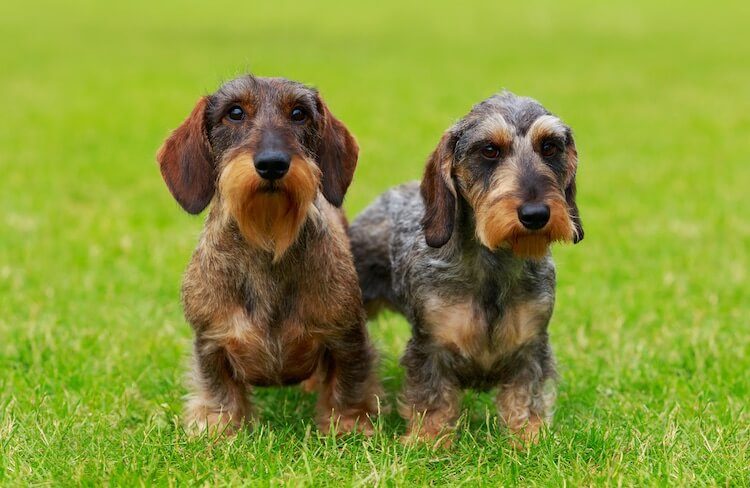 Due to their huge popularity, the price of Wire Haired Dachshund puppies can vary from $500 and $3,500, there are many factors that play into this price-tag:

A normal litter can have anywhere from 1 to 6 puppies, although the larger litter sizes are at risk of being stillborns.

For this reason, it is important for you to have an ultrasound completed (before your dog gives birth), so that you will know how many puppies there are. 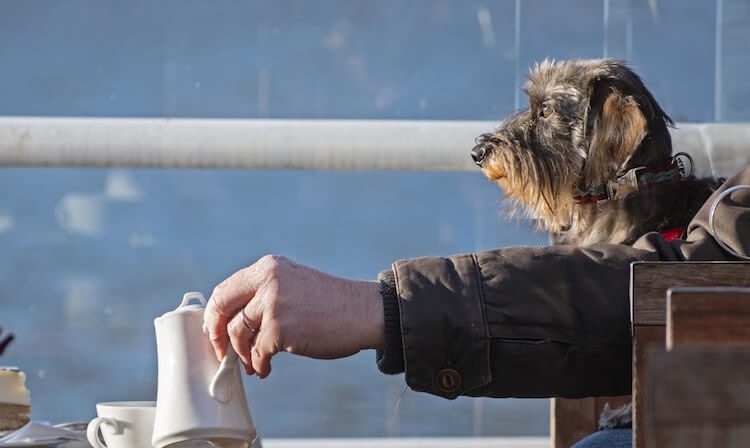 Although this dog bonds very close with certain family members, their intelligence can make them very stubborn.

They can also be mouthy around strangers (which can be rectified with correct training), however, this should be a cause of concern when getting a Dachshund.

Since they are a hound, the Wire Haired Dachshund does bark and howl quite often as it is in their nature.

Many see their howl as an endearing quality, but they can be trained to not bark at strangers if this is done early enough.

This breed is not known for being extremely protective, but they make a good watch dog due to their howling and loud barking.

The hound in Dachshunds also causes them to have a very high prey drive, this can cause them to bolt or run away if not supervised (more on this in the exercise section).

Wire Haired Dachshunds are an extremely smart breed, with cleverness and comicalness too; definitely not know for their laziness.

They are known for being somewhat playful, but as an owner it is important to make sure that they are not doing anything that could harm their back.

This breed is known for having plenty of heart, and are brave animals that love to be at their owner’s side.

They love affection, especially from one or two members of the family who they bond closely with, and due to their compact size, do very well in an apartment situation.

Wirehaired Dachshunds can be very compatible in a family setting, but they do need to be introduced to this lifestyle very early.

Along with doing well in a family environment, this breed will also get along well with other pets in the household if they are exposed to them early on.

They may even become the family’s favorite due to their more dominant personalities and their brave nature.

All Dachshund dogs are known for their elongated backs, short legs and low muscular frame.

The Wire Haired Dachshund specifically has a hard wiry outer coat and a soft undercoat.

This breed is also known for having low-hanging ears and long, slender faces.

Overall, Dachshunds have a very, very unique appearance, one that is very well known in the United States.

This breed can come in 2 official size varieties: one being standard and the other miniature:

There is also another size in between these two officially recognized variations, this being 11 pounds to 16 pounds in weight.

This Dachshund is called a Tweeny, but it is not an official classification.

All three sizes can be shown in dog shows, and Tweenies are not penalized for being an unofficial size. 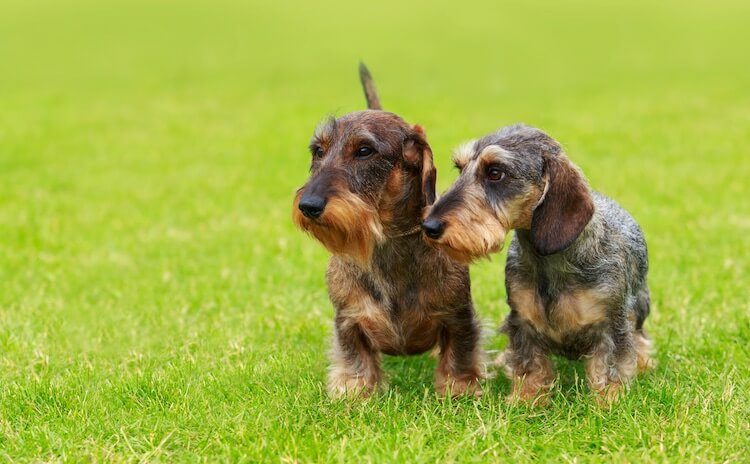 Dachshunds comes in several color varieties, and the wire haired is no different.

Black with tan accents (i.e. the classic coloration) is probably the most common, but, they can also be:

The Wire Haired Dachshund has a thick double coat which is made up of:

This breed also has the appearance of having a thick beard and bushy eyebrows, with a tail which is thickly coated in fur.

Known for being a low shedder, even with their double coat, they only need to be stripped three times a year to remove the dead fur that does not shed out often enough.

This Dachshund is not known for high amounts of shedding, but this causes the breed to need to have their coat stripped at least three times a year to remove the dead fur from their undercoat.

Stripping a Wire Haired Dachshund’s coat will allow the regrowth to be able to grow healthily.

This dog also needs to be brushed every week to avoid any sort of knotting, especially if they get into something dirty, as it can stick to their coarse fur.

As far as bathing, Doxies are known to have little to no body odor, meaning baths are not needed very frequently.

Like any other breed of dog, this breed too needs to have their teeth cleaned very regularly in order to prevent dental or gum diseases.

They should also have their nails clipped regularly in order to keep them from scratching you or the furniture. 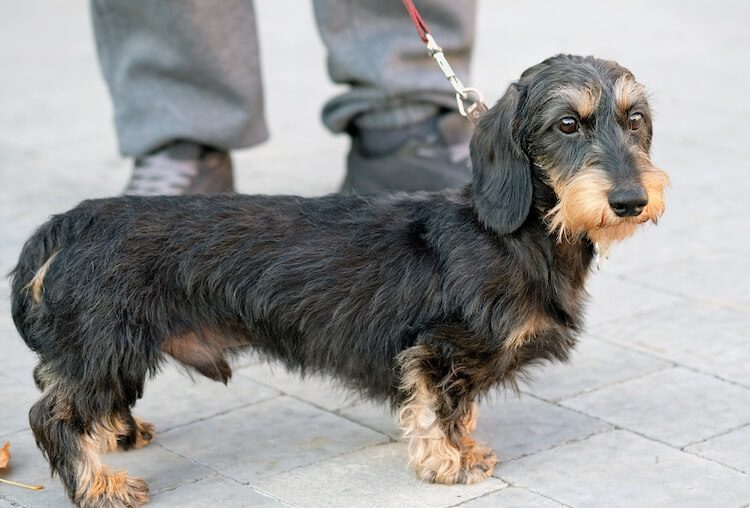 Dachshunds, specifically the long wire haired variety, do the best in a moderate climate (one that isn’t too hot or cold).

They love to go out on moderate walks, but they don’t need an extremely active lifestyle to be content.

It is extremely important for this breed to not be allowed to become overweight.

Their elongated backs are shorter arms and legs make a Wire Haired Dachshund very prone to damage from being overweight, which can help prevent Intervertebral Disc Disease (more on this in the health chapter).

The extra weight, caused by over eating, will pull on their backs, and cause a multitude of problems for your pet.

This breed doesn’t need a certain type of food, as this can be to your dog’s preference, but it is very important that they are on the correct diet for their age group, as there are different caloric requirements for puppies, adults, and senior dogs.

It is a misconception that since the Dachshund is a smaller breed that they do not need lots of exercise (this will lead to high rates of obesity in the breed).

The Wire Haired Dachshund needs regular exercise to strengthen the muscles in their back and shoulders.

Many Kennel Clubs recommend two moderate walks a day for this breed, as this will be enough to keep them happy and healthy.

This pooch should also not be walked off leash (around cars or other people), as they have a very high prey drive and are prone to running.

Like other Dachshunds, this pet is a very intelligent animal.

Because of this intelligence, they are also known to be very stubborn and independent.

The Wire Haired Dachshund does best with positive reinforcement training (with affection and treats) as this is very helpful in motivating them to do what you want them to.

They also have a very strong prey drive, which could keep them very distracted if training outside.

When puppy training, it will be a lot easier for you and your dog if you train them inside, where there are less distractions. 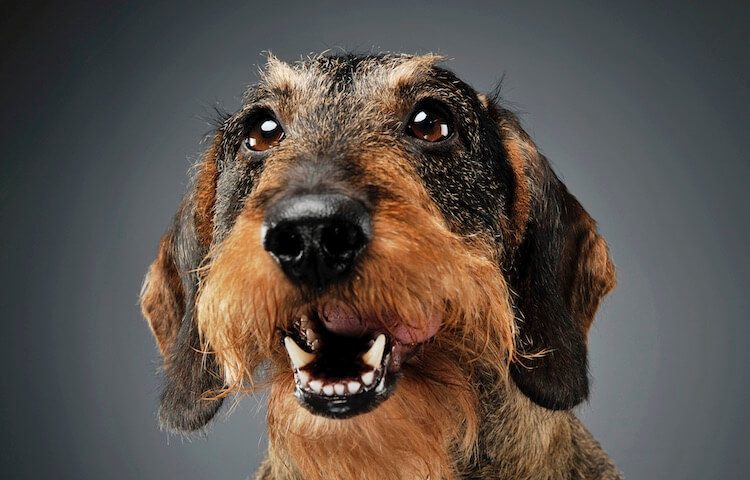 There are a few well known health concerns that all Dachshunds are prone to, but there are several preventative steps an owner can take to keep their pet happy and healthy.

One aspect of the Dachshunds’ appearance that is infamous is their elongated backs, however, this can cause a back condition called Intervertebral Disc Disease.

This can be caused by genetics, or it also can come about by a simple fall off the couch. This is why it is extremely important to support the back and rear of your Dachshund (while holding or carrying them).

Wire Haired Dachshunds are also known to having epilepsy, which is a condition that can bring about seizures. Medications are available to help control the seizures.

Due to their deep chests, this breed is also prone to Gastric Dilation-volvulus (i.e. bloat), which causes their stomachs to twist when too much excess air gets inside the body.

This is a medical emergency, but it can be treated if taken into immediate veterinary care.

Finally, the Dachshund is also prone to a few other non-life-threatening diseases, such as diabetes, eye diseases, and deafness, which can all be treated easily with consultation from a veterinarian.

The Wire Haired Dachshund is a great breed for many kinds of households, whether that be in a small apartment, in a suburb with a family, or anywhere in between.

They are known for being very intelligent, but this can cause them to be stubborn, so training needs to be done very early on.

This breed is very affectionate, so positive reinforcement is the best way to teach your pooch.

Finally, this dog is known for their unique appearance, and is one of the most endured qualities of this breed.

Does the wire haired sound like the perfect puppy for you? Let us know in the comments below.