Many dog owners have sat and laughed at their dogs howling at an ambulance siren, a particular song on the radio or TV theme tune.

Those of you with kids who play a musical instrument have probably commented that the kids and dog should start a band. But why do dogs howl? And why do they howl at certain things like sirens the night sky, the moon, ambulances and squeaky toys?

A howl is a high-pitched noise, that is mostly used as a means of communication to pass key information. Their ancient ancestors would be reliant on howling to keeping predators away from them and letting their pack know their location.

When you consider the sirens, noises and daily events that create noise; many are very high-pitched. Whilst the dog doesn’t know any better, they perceive them as a howl, and so choose to communicate.

Most wolf-like dogs haven’t lost this instinct, and they will howl at many things including:

1. Why Do Dogs Howl At Sirens? 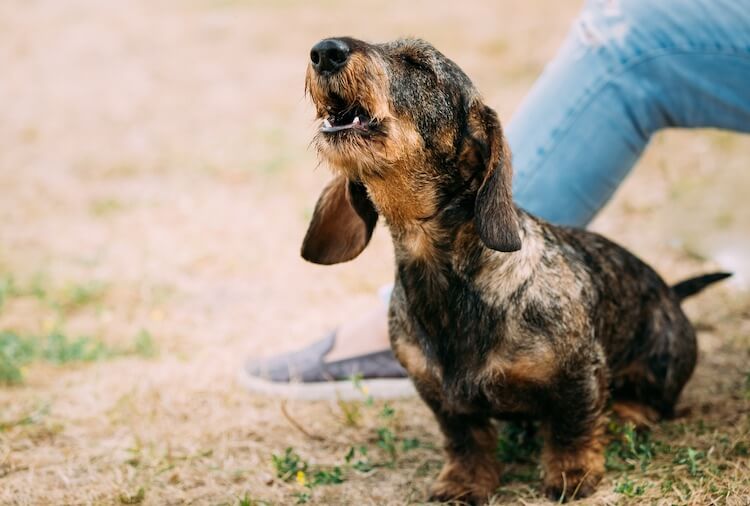 This is one of the most common noises a dog will howl with.

The breeds most likely to howl at sirens are wolf-like dogs like German Shepherds, Malamutes, Huskies, Shiba Inus and Northern Inuits. Most of these breeds won’t bark, they will just howl.

A siren is an incredibly high pitched and loud noise making between 110 to 130 Decibels.

Your dog likely perceives the siren as another dog, so they howl back. Many owners think their dog reacts because the loud noise hurts their ears, but even though a dog’s hearing is more sensitive than ours, dogs are more likely to yelp or groan when they are in pain, as opposed to howl.

Like sirens, some songs on the radio can be high-pitched, especially if you are an opera fan!

The reason behind this one is simple, the chances are your dog is howling at music because you have encouraged them to do so.

Perhaps one day, your dog started to howl to music (because it was high-pitched). You then found it endearing and interacted with him.

We know that dogs learn from the consequences of their actions, so from the positive response from you, he figured, “hey, this is what he wants me do to!” So, each time you play that certain song, he howls. 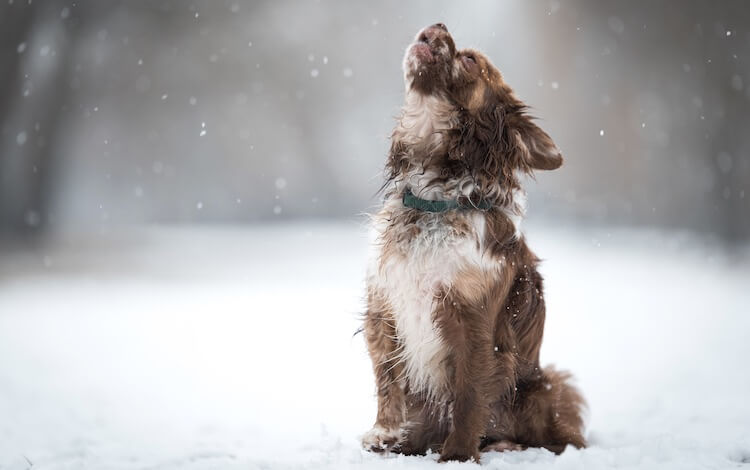 If you have ever watched your dog howl, you will quickly notice watch they will instinctively tilt their head back. This often gives the impression that they are howling at the moon.

There is an argument that the lunar cycle has an impact on human behavior. Some studies show during certain times of the moon’s cycle, humans can be more anxious, fractious and argumentative.

Could it be argued that dogs are howling during this cycle because they are suffering separation anxiety, or is there a better reason?

For many dog owners, unless you live in a busy-city, the world is a little quieter at night. For that reason, sound travels farther (or rather, certain sounds are heard better without the background drone of daytime living).

In the evening, your dog is likely more able to hear howling from dogs who are further away.

Dogs tend to howl more at night, or as morning is coming. So by default, if the world is a little quieter, more dogs are likely to hear each other, which causes more dogs to respond and communicate.

The world is generally a little quieter at night, sounds are better-heard even from further afield, especially if the wind is travelling in the right direction.

Dogs who suffer from separation anxiety will sometimes bark or howl at night; this is because they may be left alone downstairs whilst you go to bed.

Interestingly, this goes back to their ancestry.

If they are used to being in a pack and suddenly, they are on their own, are they trying to locate the rest of their pack? Wolves are inherently cooperative (even more so than the domestic dog).

Separation anxiety is usually characterized by other behaviors like:

If you are concerned please seek professional support in managing this.

5. Why Do Dogs Howl When You Howl? 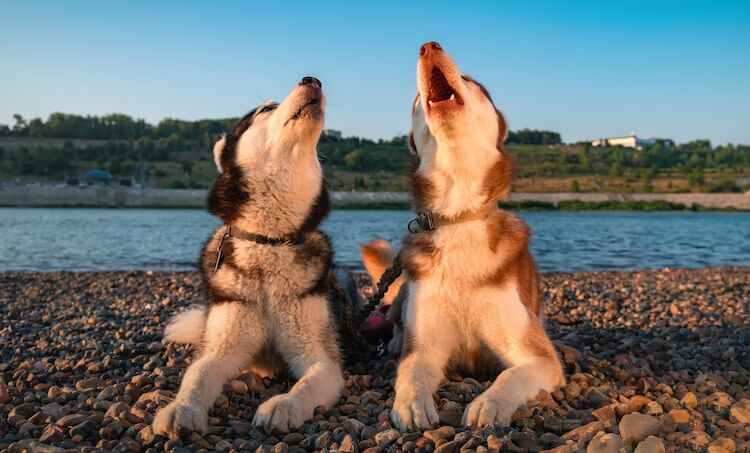 Dogs will howl in response to another noise they perceive as a howl (e.g. high-pitched noises, humans howling etc.).

They likely think any of these noises are coming from another canine.

Sometimes they may also howl purely based on the response they get, similar to why they sing along to music!

Many breeds are super-eager to please, especially working dogs. That is, they love the positive response they receive from you when they perform a specific behavior.

You are actively encouraging your dog to do something, if they do it and you behave jovially and praise them. To them, this is a positive response, and your conditioning tells them to repeat that very behavior.

6. Why Do Dogs Howl At Fire Trucks?

Fire trucks have loud sirens, they can produce a noise louder than a jet-plane taking off. They need this to get through packed streets to emergencies, but your dog doesn’t know this!

It is common for dog owners to think the siren is hurting their dog’s ears, but this is unlikely. Many dogs, especially sled type dogs, can be incredible at hiding pain. In serious cases of pain, they will yelp or groan, but more often than not, they will lick their lips, turn their head or pant excessively.

Howling is rarely a sign of pain in dogs. When they experience pain or irritation they paw or lick at it. Wouldn’t it be more likely that if the noise was hurting them, they would paw at their ears, trying to cover them, rather than join in the chorus?!

Your dog likely considers the siren a very odd howl from another dog.

7. Why Do Dogs Howl When Babies Cry? 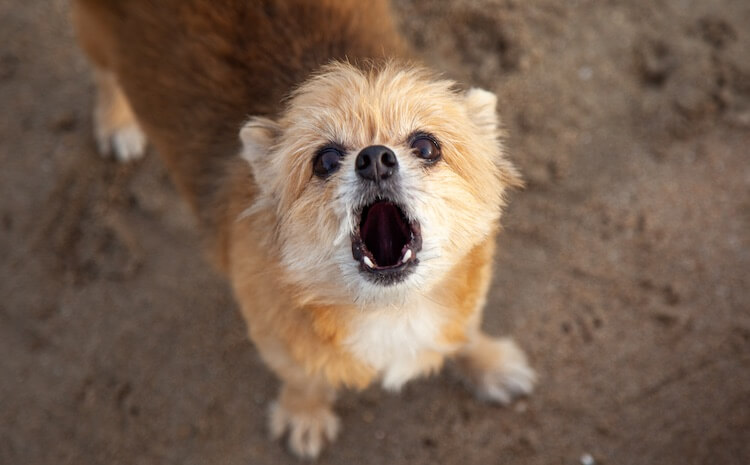 Many young families with dogs have experienced this.

The baby starts crying, then the dog starts howling and so does the neighbor’s dog. You can rest in the knowledge there is a reason for all of this chaos.

Some babies will stop crying when a dog starts howling as a shock response. Studies have shown that dogs experience emotional contagion when a human baby cries. In short, they experience empathy.

Why a dog howls at a cry now has two potential explanations:

8. Why Do Dogs Howl At Trains?

The speed at which a train travels over railroad tracks and ties creates a high-pitched noise. Not only that, but trains will often use horns, whistles and bells. All of these noises may cause your dog to howl.

Depending on how far away from a track you are, some dogs may bark at the bangs made by trains, if they are particularly alert house dogs.

For those dogs more likely to howl than bark, this could just be communal chorus with another barking dog.

9. Why Do Dogs Howl At Squeaky Toys? 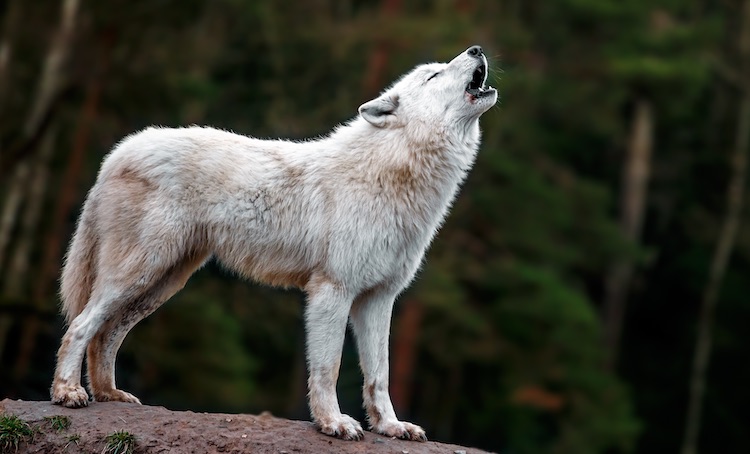 There are many suggestions that squeaky-toys resemble the sound of a scared or injured animal,which in turn, ignites a dog’s prey drive. Many dogs will shake their squeaky toy, or chew, and gnaw until they have managed to pull the squeak out.

Instinct is instinct, especially in those dogs who were historical hunters!

What this suggests, is that in the absence of perceiving the squeak as a howl, they perceive the squeak as prey, to be hunted. We know many dogs howl to let their owner know they have found prey!

By now, we hope you have probably figured that dogs will howl in response to high-pitched noises because they perceive it an opportunity to communicate.

Howling is instinctive to many domestic dogs; especially wolf-mixes.

It is how their ancestral world communicated with their pack (they used it as a sort of GPS).

Even though humans have bred new behaviors and traits into domestic dogs, their genes remain the same. Even closer to their ancestors are wolf-like dogs, these are the breeds most likely to keep their howling tendencies.

If your dog simply howls along to songs or sirens, he just can’t shake that instinct.

Let us know what your dog howls to below!

Fido’s human friends love to eat watermelons, but is it safe to feed your dog watermelon? Yes, in short watermelon is safe for your dog to eat; especially helpful in keeping them hydrated during a hot summer’s day. This huge fruit has plenty of superb Continue Reading →

Those puppy dog eyes are looking up at you again; you know your faithful friend wants some of that shrimp you are eating. As much as we know we should not give large amounts of table scraps to our dogs, we often wonder whether just Continue Reading →