Not surprisingly many Japanese dog breeds, originating from Japan, do possess similar characteristics.

Many people often get certain breeds confused, the Japanese Akita with the Shiba Inu for example.

Even more widely confused is the Spitz with the Samoyed or the Pomeranian.

In this article we look at the six ancient and rare Japanese dog breeds, how to tell the difference between them all and what to expect in their personality and temperament.

1. The Hokkaido Dog – A Japanese Dog 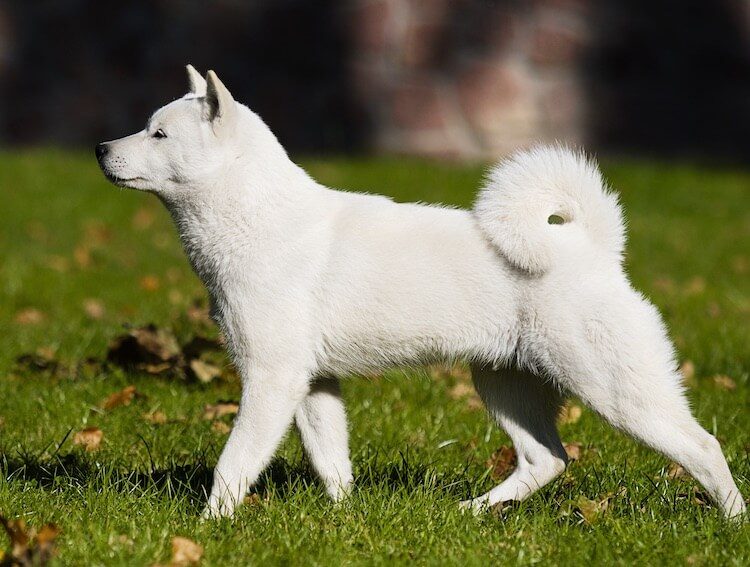 This medium size working dog stands no taller than 20 inches at the withers. These alert and bold hunting dogs will weigh between 44-66 pounds.

Described as dignified and devoted, the Hokkaido Dog was loved for its ability to manage Wild Boar and Bear populations in Japan.

Strong and intelligent, this faithful breed doesn’t take kindly to strangers. They can be incredibly protective of their family so require very good socialization.

Particularly rare outside of Japan, the Hokkaido is recognized for its longer and denser coat than other Japanese breeds, but it still has a double coat. A course guard hair protects this dog from the elements and a thick undercoat keeps them warm.

You will find the Hokkaido Dog in a range of colors including white, red, black, brindle and wolf grey.

Highly active, these dogs suit owners with a busy lifestyle. They excel at agility, flyball and obedience. Make the mistake of not stimulating these guys enough and your house will be destroyed as they get bored very easily.

Generally healthy, they do still suffer with some hereditary conditions including: luxating patella, heart murmurs, pica and hip dysplasia.

The Hokkaido is a good addition to an experienced home, with owners who love to keep busy. They suit homes with a large, secured yard and where you have access to interesting on-leash walks.

2. Akita – An American and Japanese Akita 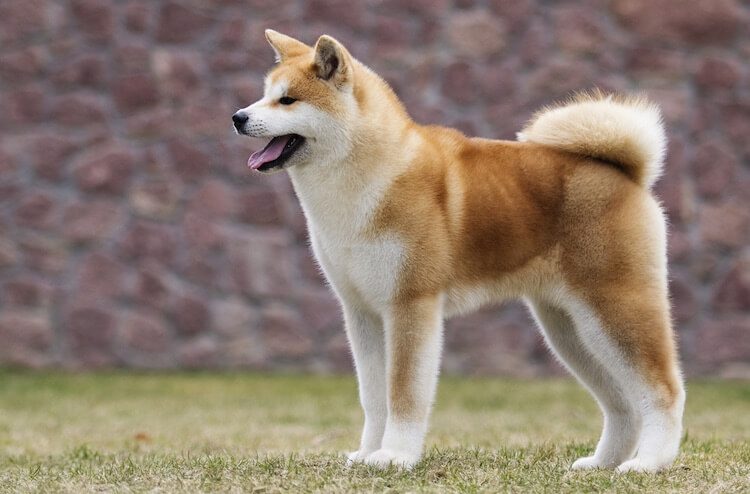 You may have heard of Japanese dog breeds from the film Hachi, staring Richard Gere and an Akita Dog.

This was based on the true story of a Japanese Dog who waited for his owner every day to return from his commute at the train station. One day, his owner, Ueno, died; not returning on his usual commute and Hachiko, the Japanese Akita waited for 9 nine years, until his own death, for his owner to return.

The Japanese Akita originated to hunt bear, elk and boar. It was prized for its willingness to work, loyalty and intelligence. Unfortunately, thanks to their double coat, many were killed in WWII (as soldiers used it to stay warm) which diminished numbers significantly.

Thankfully, US servicemen did fall in love with the Akitas they met and took them home to the states. They did appear to be more impressed with the larger Akitas and for that reason, there are two known Akitas now:

Both dogs are strong, independent and not for first time owners. The American Akitas will weigh between 70-130 pounds; females are generally smaller. Japanese Akitas are smaller and lighter again and look more like the Shiba Inu.

Akitas are banned or restricted in many states across America.

They can be wary of strangers and protective of their family. When placed with experienced owners, who understand the need for early and continued training and socialization you will never meet a more loyal, loving and devoted breed.

Akitas look at the world like marmite; they either love you or hate you. But if they love you, they will do so with all their heart. 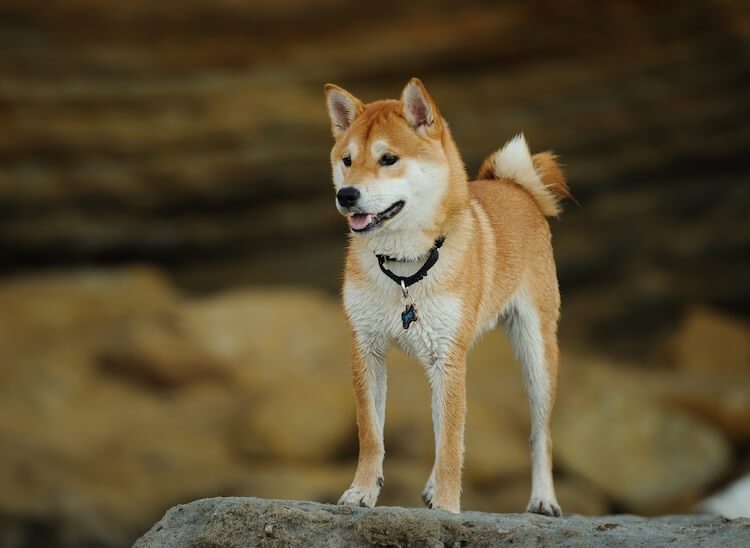 The difficulty with some Japanese dog breeds is their similarity of appearance. Another Japanese Dog bred for hunting is the Shiba Inu. Standing no taller than 17 inches at the withers, females will weigh around 18 pounds and males will weigh no more than 23 pounds.

Another double coated breed the Inu only comes in a handful of colors; red, sesame, black and tan or white.

Spirited and bold, the Inu has an independence which makes them aloof with strangers. Another one not for first time owners, the Inu is best placed with experienced owners with an active lifestyle.

Despite its similar appearance to other Japanese dog breeds (e.g. Akita), the Shiba will be noticed by its scream. When happy or excited, the Inu will produce a high-pitched scream. They will also scream if unhappy or provoked, so be mindful of this warning.

Fastidiously clean, you will still spend plenty of time vacuuming their double coated shedding from the carpets. On the plus side, Shibas aren’t renowned for being destructive in the home, but they can suffer with separation anxiety if left for long periods of time.

Generally healthy, their lifespan averages 12-15 years, but they are renowned for suffering with a range of allergies. They are also predisposed to hip dysplasia and luxating patellas like the Hokkaido.

If you are looking for a fox like, alert and high-spirited companion, the Shiba is a firm contender. 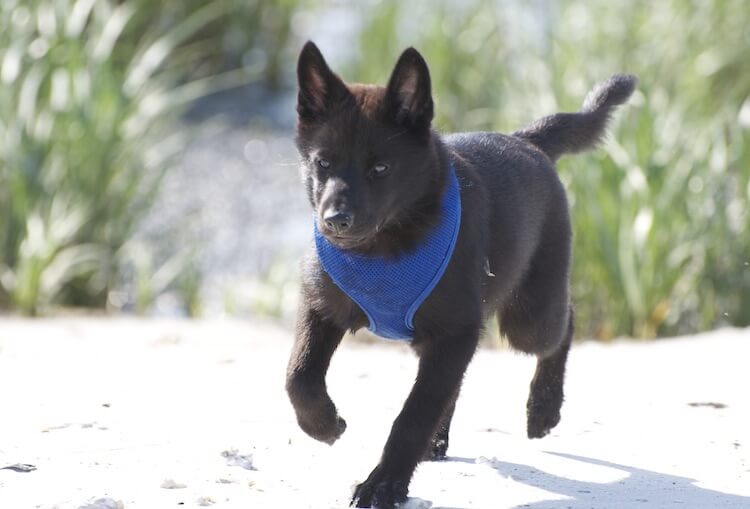 Another hunter, the Kai Ken is considered a very rare breed; even in Japan. The Kai Ken dog is not as independent in temperament as its fellow Japanese dog breeds. It is also more willing to please.

The Kai Ken was also bred to hunt game in the mountains of Japan. Medium in size, they will weigh between 25-55 pounds with males standing slightly taller than females between 20-22 and 18-20 inches respectively.

They have a harsh coat which comes in a range of colors including black brindle, red brindle and standard brindle. The Brindle provides an impressive camouflage in the mountains against predator and prey.

The Kai Ken is incredibly intelligent, learning even faster than other native Japanese dog breeds.

Another active dog, the Kai Ken is an impeccable swimming dog and climber. Not suited for fist time owners, the Kai Ken will thrive with experienced handlers who have an active lifestyle.

Despite them not being as independent as fellow breeds, they can still be reserved with strangers; early socialization and positive reinforcement is a must with these Japanese Dogs.

It isn’t advised to walk the Kai Ken off leash due to their high prey drive – they will usually find something much more interesting than you to chase. For that reason, a secured yard is a must; they are more suited to suburb or rural living where you have access to a range of walks. Brain games are good option to keep their intelligent mind active too.

The Kai Ken is a trustworthy guardian and a devoted companion. Despite its arrival in the US, in the 1950’s, you’ll still be hard pushed to find a breeder. 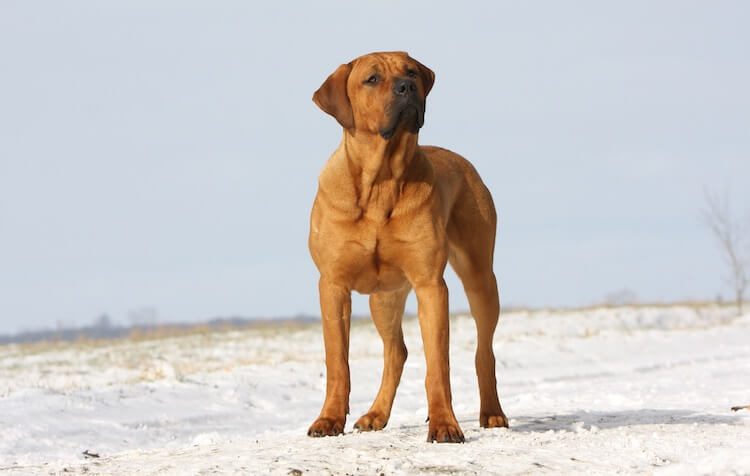 Banned and restricted in many countries, this Japanese Dog Breed, the Tosa, is known as the fighting dog and still used, legally in dog fights in Japan.

Often known as the Japanese Mastiff, he’s a large guy.

Weighing between 100 – 200 pounds and standing up to 23 inches in height the Tosa is a giant dog breed: fearless and patient.

Japan has a long standing history of dog fighting. The Tosa is a result of a range of breeds including:

There are also rumors that St Bernards and Bull Terriers were thrown into the mix at certain points to add to their stamina, size and fighting ability.

Despite this fighting history, those who own Tosas will boast of their quiet, docile nature.

They are naturally wary of strangers and particularly watchful over their family; but they have an unwavering desire to please their owners.

Experienced large breed owners who understand the Tosa’s need for early socialization and training will have the most doting companion.

They are renowned for their calm nature; unlike their fellow Japanese breeds they aren’t particularly high energy.

In Japan, Tosas are the equivalent to the Sumo wrestler; treated with honor and dignity. In the States, they are loved for their companionship and guardianship. Just don’t try to move to a new country with them; you may struggle to find one that accepts them.

6. The Spitz – A Small Japanese Dog 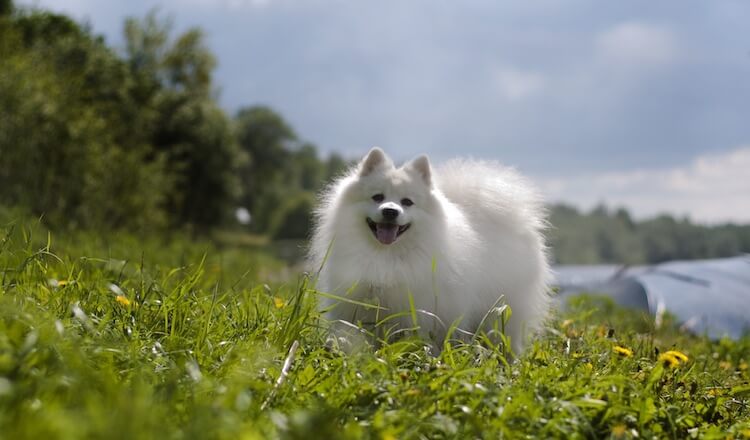 In general, your Spitz will range between 13-16” in height and will be white in color and thanks to that and their long, thick coat they come in relatively high on grooming requirements; regular brushing is a must to keep them looking sharp!

Active, loyal and bright, the Spitz is loved for its companionship. They are super watch dogs, even though they are small; their bark is a deterrent in its own right.

Their devotion to their owner should be reciprocated; they don’t tolerate being left alone for long periods. They will bark and can become destructive.

They are a relatively long living breed; around 10-16 years but like their cousin, the smaller Pomeranian, they do suffer with luxating patellas. They are also prone to eye issues, especially runny eyes; mostly commonly caused by tear duct issues or allergies.

The Spitz is loving towards children and adults alike and is therefore a good choice for families. Intelligent and playful, they are super trainable; responding best to positive reinforcement and rewards.

Despite the differences between these Japanese dog breeds, there is one common theme in all the Japanese Dogs; their unwavering loyalty to their owner.

If you are looking for a devoted companion, who is watchful and alert, then Japanese breeds are firm contenders.

Most of these ancient and rare breeds are not for first time owners; they thrive in homes who understand their needs and the importance of early socialization and training.

Experienced handlers looking for larger breeds may consider an Akita, Kai Ken or Tosa Inu; just remember the bans and restrictions applicable to the Akita and Tosa.

Those looking for smaller, more agile guys may be tempted with the Shiba Inu. Then we have the smallest on the list; the Spitz.

On the whole, Japanese dog breeds are watchful and wary of strangers, but in their family, they are wholeheartedly devoted and dignified.

Pitbull Lab Mix: What To Know Before Buying A Labrabull

A Pitbull Lab Mix is a Labrador Retriever and Pitbull hybrid. This cross brings out the best of both of these lovable dogs. Labrabulls are playful dogs that will settle right in to any family environment. However this breed also needs a lot of work Continue Reading →

The Bluetick Coonhound is a large dog, originally bred as a hunting companion, although more recently is being used as a loving family pet. Whilst being able to suit the life of a working dog hunting prey, they are also well-suited to the family home, Continue Reading →

Mini Australian Shepherd: What To Know Before Buying

The Mini Australian Shepherd is an intelligent, active and hard working dog. They offer all the lively energy of an Australian Shepherd in a tiny package. Whilst they were originally bred for farm work they are now kept as active companions for families all over Continue Reading →