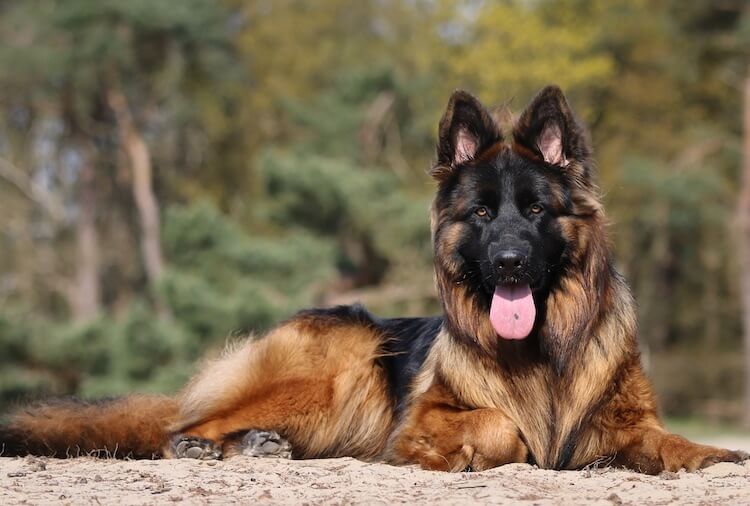 The long haired German Shepherd possesses all of the same qualities as the standard short haired breed.

This dog is a very popular breed amongst young individuals, couples and families.

But what makes this breed different?

The only difference between the long haired German Shepherd and their standard siblings is a “genetic fault”; giving them their long and single coated fur.

In this guide, we will tell you all you need to know about the long haired GSD including: breed history, appearance, temperament, exercise and puppy buying guide.

The long haired German Shepherd was bred from their standard siblings, the only difference is coat length.

This breed is due to rare autosomal recessive genes, meaning that both parents need to be a carrier of the long coat phenotype in order for a long haired German Shepherd puppy to be born.

Known as a “fault”, according to the American Kennel Club’s standards, this gorgeous trait continues to be classified as a breeding fault.

However, this dog is known for their favorable German Shepherd characteristics and their long beautiful coat which is becoming increasingly popular with dog lovers.

First bred to be a hard-working herding dog, the German Shepherd was first discovered by Max von Stephanitz in 1899.

von Stephanitz encountered a dog named “Hektor” at a dog show and was impressed by the dog’s appearance and characteristics. He later adopted Hektor and changed his name to “Horand”.

Today, the German Shepherd dog is bred for families and they are used as working dogs too, you may see this canine working with the police and military.

First recognized by the American Kennel Club in 1908 this canine has been a pedigree for over 100 years.

The modern Shepherd is believed to have changed over time, diverging from von Stephanitz’ first dog Horand.

Whilst this breed may have strayed from Horand’s appearance, the long haired German Shepherd is still recognized as a beautiful, intelligent, obedient, loyal and hard-working dog breed.

The standard siblings have a litter size of between four to nine puppies, however, the number of long haired German Shepherd puppies in a litter is between one to three.

Only two German Shepherds carrying this recessive gene can give birth to long haired.

This is dependent upon the breeder. When it comes to purebred canines, the higher cost is normally a reflection of parent pedigree and lineage genetic health.

Their puppy feet are disproportionally large in comparison to their bodies.

As they mature older, their baby fur becomes a little coarser and their ears also become erect.

This dog reaches physical maturity at approximately one and a half years of age.

When trained well, the standard GSD has an excellent temperament and the same can be said for the long haired German Shepherd.

Being a large dog, this pooch has oodles of energy to burn and loves backyard games with family members and friends.

Not only is the German Shepherd very playful, they also love to stick by your side and relax. Known for being incredibly loyal, you may find them following you around whenever they see fit.

Because this canine was originally bred to be a herding companion with a high prey drive, correct and successful introductions and socialization with new people and animals is very important.

This breed is highly intelligent and is therefore very capable of distinguishing between a non-threatening and threatening situation.

The long haired German Shepherd is not known for unwanted behaviors, instead they are known for their impeccable obedience.

However, any pet may develop bad habits (i.e. barking or chewing), due to a lack of exercise of boredom.

Historically these pooches were known for being highly aggressive, however, this is simply a guarding temperament to those they love.

Due to their playfulness, they are incredibly kid-friendly dogs. They have heaps of energy making them great play mates for your children.

Underneath all of their “macho-ness” is an affectionate puppy.

They may be wary of strangers, and take a little time to win over, but when they do you will see just how big their hearts can be.

The long haired German Shepherd is capable of living with pets of different species (even cats), but due to their high prey drive, socialization should begin as early as possible to prevent unwanted issues.

The long haired German Shepherd’s size is the same as the standard dog:

This canine can grow very large and is therefore classified as a large dog breed.

An athletic and muscular build, these dogs are longer than they are tall.

Their facial features definitely have wolf-like features with a long, strong muzzle and erect ears. They also have a thick bushy tail.

In short, the long haired German Shepherd has no difference in appearance from the breed standard, with the exception of the long coat!

Their fur may come in a variety of different colors, this depends on the genetics of each puppy.

Some fur colors are due to recessive genes.

The different fur colors are identical to the standard German Shepherd breed, these include:

The long haired German Shepherd coat is only a single coat, meaning they do not tolerate the cold weather as well as their standing siblings.

Their erect ears are very fluffy, however, the rest of their coat is coarser.

Known for being a big shedder, you may find yourself vacuuming a little more than normal.

The long haired coat should not be bathed regularly as it doesn’t have many natural oils. Excessive or unnecessary bathing may lead to skin irritation such as dermatitis.

The length of the long haired German Shepherd means they are prone to matting and tangles. Excess dirt can also build up within their coat.

Consistent daily brushing is necessary to ensure your canine companion keeps a healthy and glowing coat.

Start brushing your puppies fur at the youngest age possible so that they become accustomed to it and don’t try nibble your fingers or brush.

Teeth brushing is just as important in canines, however, we understand that this can be a little tricky so you can use dental treats instead.

Suitable for both active and young individuals, couples and families, this breed may be a little too hard to handle for those more senior owners due to their demanding exercise requirements.

The long haired German Shepherd thrives on a dry, raw or wet diet.

An increasing amount of owners are beginning to introduce their dogs to raw food diets.

This dog is likely to love this diet type and it’s a great option as long as it is ensured that all their nutritional requirements are met (i.e. protein, fat, carbohydrates, vitamins and minerals).

Whichever diet type you choose will be based on price, ease of feeding and convenience.

Feeding them once daily is completely fine, however, if you wish, you can split feedings into two: morning and night.

It is recommended that they receive two hours of exercise per day in the form of running, walking and open-space playtime.

When it comes to leash walking, your dog may try to take the lead and walk you. However, with proper leash training and patience, you both will find a rhythm in no time.

Play time is a big hit when it comes to exercising your long haired German Shepherd. They love to run around with toys and you… this makes games such as fetch, tug-o-war and hide-and-seek lots of fun.

The long haired German Shepherd is a strong and self-assured breed. However, they love to please and are incredibly intelligent.

This breed is renowned for their brains and is classified as one of the most intelligent dog breeds by the American Kennel Club.

They are easy to train and will impress owners by picking up simple commands very quickly.

The most important thing to remember when training your German Shepherd is the act of positive reinforcement.

The major health issue associated with this breed is hip dysplasia.

Hip dysplasia occurs due to a disease where the hip and socket joint is not formed properly. Due to this malformation, the femur can cause damage by constant rubbing and grinding.

Dysplasia can lead to constant pain and lameness.

To ensure that your pup is less likely to suffer from hip dysplasia; it is important to find a good breeder who will only breed from healthy stock (i.e. hip scored) and ensures no over-breeding occurs. 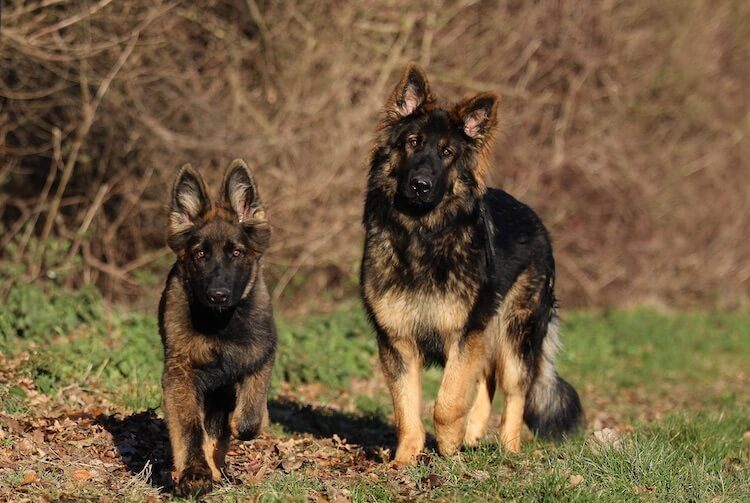 The long haired German Shepherd is almost identical to their standard siblings when it comes to their appearance, personality, temperament, maintenance and exercise requirements… with the exception of coat length of course!

This breed may be large, but they have a big heart to match too.

What’s your favorite German Shepherd? Long or short coat? Let us know below!