The Rottweiler, known affectionately as Rotties, is a large working dog breed known for his robust and powerful appearance.

Despite his appearance, he is loved by fans worldwide for his extremely loving and kind-natured temperament.

Today, he is one of America’s favorite dog breeds, so it is only right that we share 10 fun and little known facts about this breed!

It is widely accepted that the Rottweiler dog hails from Rottweil in Germany.

But did you know Rottweilers are one of the most ancient dog breeds and one of the eldest herding breeds known to humans?

Their ancestors can be traced back to Ancient Roman. It is believed they a relative of the Roman Drover dog.

Roman Drover dogs were admired by the Romans for their strength, intelligence and guardianship.

During a period around 74AD; the Roman Empire conquered Rottweil Germany.

The Romans were accompanied by their Roman Drover Dogs who were used to herd and drive livestock through the town; as well as pull meat carts and perform guardianship duties.

In 260 AD the Romans lost control of Rottweil as the Germans took over once again. However, they had no desire to get rid of such a strong, intelligent and loyal breed. So they began to utilize their power as a working dog.

This breed has been around for many centuries and today they thrive all over the world, not only as a working dog, but as a family pet too.

9. The American Kennel Club Classifies Rottweilers As A Large Breed 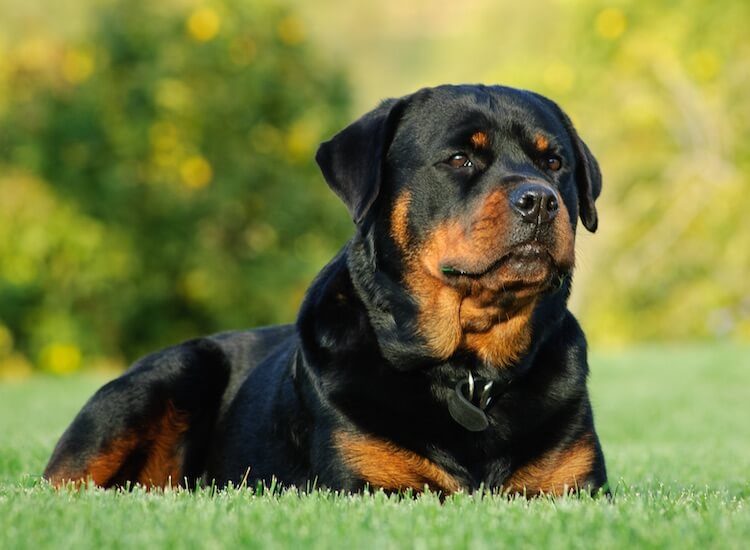 According to the American Kennel Club, the Rottweiler is described as a large working dog who is powerful and robust.

Their body is well defined, firm and muscular with a broad and powerful chest.

A Rottweiler’s head is broad and almost appears to be disproportionately large in comparison to their body.

Their deep loving eyes are almond in shape and are desirably dark brown in color. Although some may have yellow-ish eyes; this is seen as a disqualification and a fault in the breed standard.

Their ears are usually level with their head, giving them a strong and broad appearance.

With their powerful stature and loving smile, this dog breed is easily recognized by dog lovers all over the world.

Unlike many breeds whose coats may have many color variations, the Rottweiler’s coat is limited to black with tan to mahogany markings.

8. Rottweilers Have A Bite Force Of 328 Pounds Per Square Inch 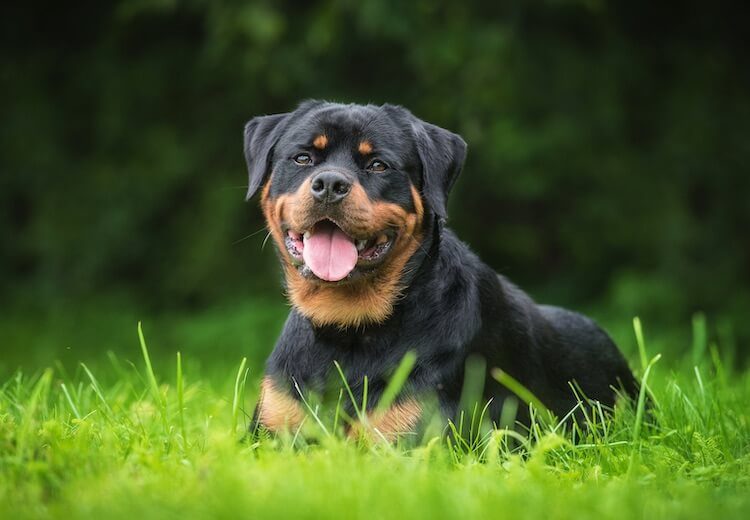 With a noticeably powerful and robust appearance, it is no surprise that the Rottweiler is known for his strength.

But did you know that their jaw is so powerful that it equates to approximately half the strength of a shark’s bite force?

We can thank their strong define jaw and large head to generate this bite force. Unfortunately, this strength may be seen as a negative attribute to some.

Without correct training and socialization, some fear that this dog is a danger to other animals and people.

However, any Rottweiler owner will know that with proper training and socialization this breed will be loving and very gentle.

7. The Rottweiler Is Recognized As Part Of The “Working Dog” Group 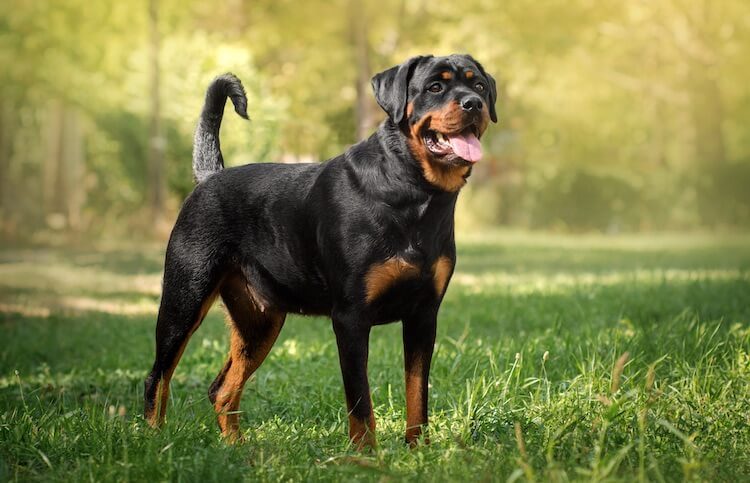 Their ancestors worked alongside ancient Romans when they were used to drive livestock for the Roman Army.

It was their strength that made them such a desirable breed for the pulling of meat-carts in Germany.

Once in Germany, the German’s admired this dog’s strength, intelligence, and loyalty, so they used them as a working dog and became known as the “German Butcher Dog”.

In Germany, the Rottweiler was given the task of moving livestock and the pulling of meat carts.

They continued their farm dog and herding/guardianship roles throughout Germany for many years.

Today, their characteristics are still admired as the perfect combination for a working dog breed and family pet:

Although, they are known for their impeccable work ethic, this does not mean that the working dog life is all they fit into.

The Rottweiler is very loving, loyal, affectionate and playful!

Their playful behavior means that they may even get along well with children. They love to use their energy to run around in the backyard with toys.

However, due to their large size, we recommend supervising play-time as well as ensuring that you socialize and train your puppy properly from an early age so that they are used to young children and are aware of their smaller stature.

Believe it or not, the Rottweiler’s heart is a lot bigger than their appearance. They love fiercely and are very attentive and affectionate to their loved ones.

Don’t be surprised if you find your dog trying to climb their large body onto your lap for cuddle time (they love to be a lapdog).

You can expect your days to be filled with smiles, kisses and lots of licks.

However, due to their guardian and herding instincts, Rottweilers have a high prey drive.

We therefore recommend this puppy is introduced to smaller animals from an early age or is simply kept in a large dog only household.

Keep in mind that they may be wary of strangers, therefore proper introductions may be necessary as they may just be a little protective of you! 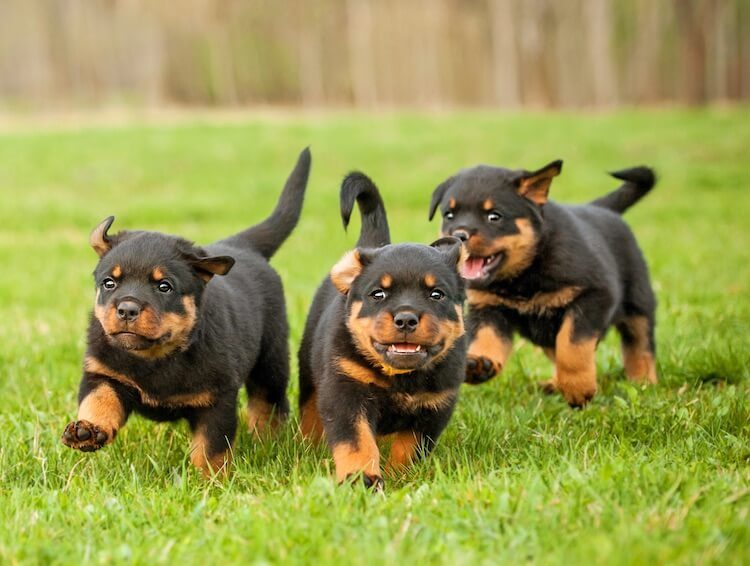 According to the American Kennel Club, the Rottweiler breed comes in hot and heavy at number 8 in the top 10 breeds in the United States.

The Rottweiler’s popularity can be further emphasized in the 90s where they took home first place and were the number one registered dog in the United States.

Their popularity comes as no surprise to dog lovers around the world as this is a breed who is known to be strong yet goofy, loving and loyal and intelligent yet down to earth.

This dog’s man-friendly appearance makes them a huge hit for men whilst their attentive and sweet-natured temperament makes them a much loved puppy for females too.

Rottweilers are known to be one of the most intelligent dog breeds. Remember, this doesn’t mean that you should avoid correct training and socialization.

Socializing your puppy from a young age will ensure that they are able to grow into a mature, happy and well-mannered dog!

It is important to remember to stick with positive reinforcement dog training methods when it comes to training. Dogs learn from a lot of praise, treats and positivity!

Rottweilers are an extremely loyal breed who loves to please you so training should go down a treat.

Their high level of intelligence doesn’t only make training easier but it is also important to remember to provide them with mental stimulation so that destructive and boredom behaviors don’t arise.

Mental stimulation can be done through environmental enrichment, training sessions and even through one on one play with your dog.

Brain games are an excellent option for mental stimulation and they have the added bonus of creating bonding time with your puppy.

The rules are simple:

We have no doubt that your Rottie will be running around with his tongue out for this one!

3. They May Suffer From Hip Dysplasia 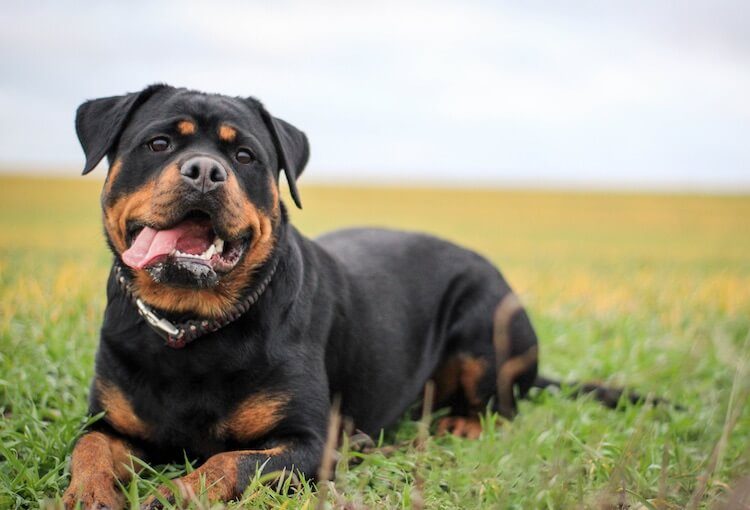 Unfortunately, being a pedigree dog means that the Rottweiler may be genetically predisposed to the same health problems as their parents.

Hip Dysplasia is a musculoskeletal disease in which there is a malformation of the hip joint between the ball and the socket.

Due to the malformation, the joint rubs in a harsh manner instead of gliding smoothly as per normal.

This rubbing may cause pain, lameness and can lead to extreme deterioration which may lead to a complete loss of function.

On top of genetic susceptibility, dogs who are obese are also at risk of developing Hip Dysplasia, so you should be careful with over-feeding your Rottie!

As an owner, and a dog lover, it is your responsibility to ensure that your dog receives the best care and has a high quality of life.

Unfortunately, Rottweiler’s often have a much shorter life expectancy than us at only 8 to 10 years.

So, it’s important to cherish and make the most of that big head and silly, loving grin!

Additionally, we recommend getting your puppy from a responsible breeder to ensure all the correct health checks were carried out on parents and puppies.

There once was a time when this dog breed was on the verge of extinction.

By the 19th century, due to the modernization and the introduction of smaller or easier to care for working dogs, the Rottweiler’s job position was quite limited.

Unofficial breeder clubs were formed with the intention of reviving the breed. Over time, these became successful and the breed lived on.

In addition, the German Police Force was a major contributor to the re-establishment of this breed’s popularity and breeding stock.

It is said that it was their traits as a military and police dog which helped this breed gain back popularity.

1. Elton John Has A Rottweiler 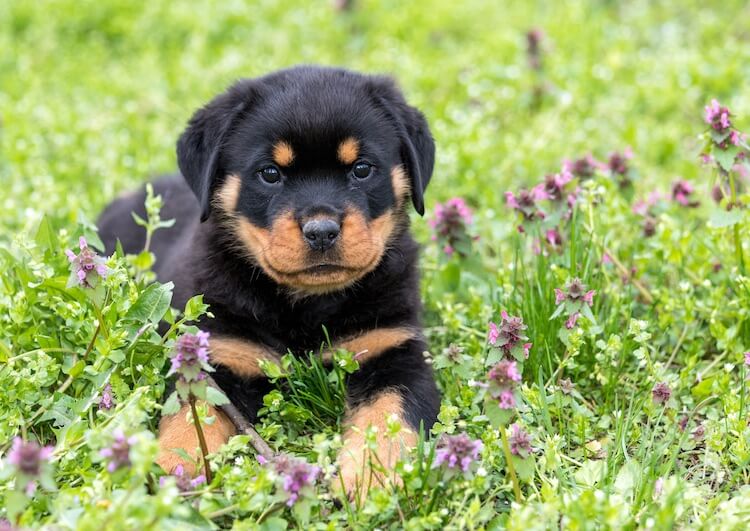 That’s right, even Rocket Man’s Elton John has a Rottweiler!

Rottweiler’s have so many fantastic, perfect and loveable characteristics that it is no surprise that even our most favorite celebrities love them too.

Other celebrity owners include: Will Smith, Bruno Mars, Leonardo DiCaprio and Robbie Williams.

As you can see, this dog is owned by an array of different people.

This fact just may emphasize their adaptability and ability to fit in nicely with many dog lovers and their different lifestyles.

Additionally, being a celebrity companion is not the only manner this breed has walked their way into the spotlight.

“Good Boy, Carl” is the name of a favorite and well-loved children’s pictures books.

This series follows Carl (a Rottweiler dog) as he goes on many adventures as a baby sitter!

That concludes our top 10 facts on one of America’s most loved large dog breeds.

The Rottweiler is loyal, loving and a little bit goofy, which when combined with their intelligence and easy-to-train temperament, makes this breed an excellent choice for families and active individuals.

This dog breed is perfect for those who love to get out of the house for exercise, just as much as they love to snuggle up on the couch with furry company.

There is definitely a lot more than meets the eye when it comes to this German butcher dog! Let us know your favorite Rottweiler fact below!

A Complete Guide To The Blue Tick Beagle Dog

The blue tick beagle dog is a type of beagle that was originally bred to hunt rabbits and hares as part of a pack. The blue tick beagle has a credible reputation as a hunting companion. More recently they can be seen working as detection Continue Reading →

The Rhodesian Ridgeback is a dog strong enough to fend off lions but gentle enough to be a loving pet. They are unique in many ways with their ridge of front-facing wheaten hair and history as a game hunting dog from South Africa. First bred Continue Reading →