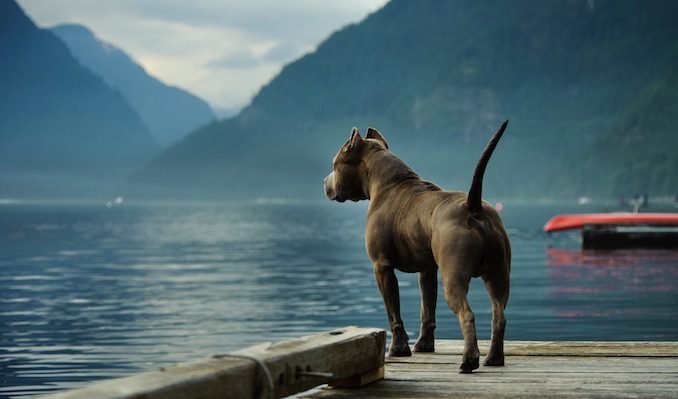 The Blue Nose Pitbull is a rare type of Pitbull. They are as a result of a recessive gene which means they are bred from a smaller gene pool.

What many think as a separate breed is actually just a rare type of American Pitbull Terrier; more commonly known as the Pitbull or Pit.

It’s easy to see why… Baffled? We’re not surprised.

Let’s have a look at the Blue Nose Pitbull in a little more detail. 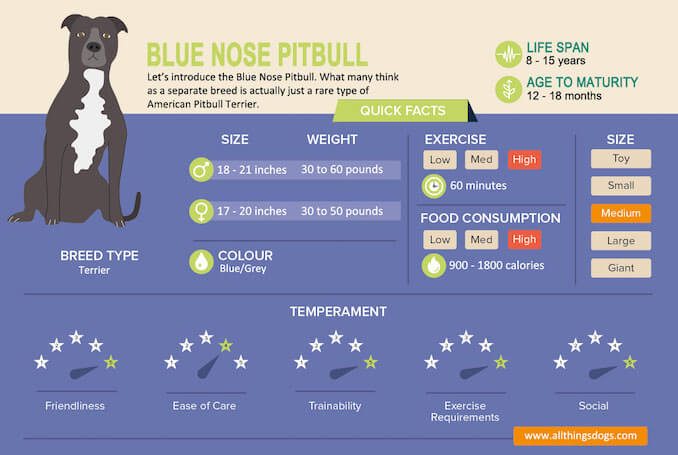 Your Free Guide: Download A Free Blue Nose Pitbull Dog Guide To Find Out Even More About This Dog.

Pitbull dogs aren’t exactly top of the list for popularity.

They have a checkered past which has resulted in being banned in many Countries across the world including; Germany, Spain, Italy, UK and even some cities (e.g. Jacksonville City) here in the US.

Even the American Kennel Club doesn’t recognize the Blue Nose Pitbull as a dog breed.

Their working ability is often overlooked; being mostly known for their work in protecting criminals or for their role as fighting dogs. 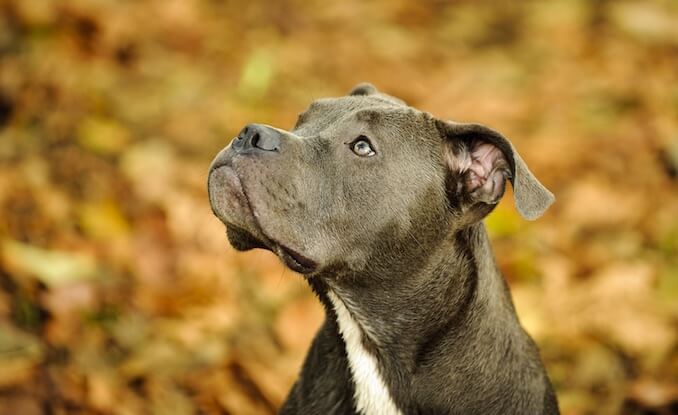 We can thank the British for these incredible animals.

Blue Nose Pitbulls were a result of breeding Old English Terriers with Old English Bulldogs. They wanted a dog with the strength of the Bulldog and the eagerness of the Terrier.

Unfortunately, the reason why was the barbaric bloodsports of bull and bear baiting. It was deemed a spectator sport, even Queen Anne and Henry VIII were huge fans.

Thankfully in 1835, The Cruelty to Animals Act was passed which outlawed these “sports” in the UK.

But this success was bittersweet, as bear-baiting and bull-baiting was now outlawed, history hasn’t gone unnoticed and to this day, Pitbull dogs are used widely in illegal dog fighting rings in the UK and in the States.

The Blue Nose Pitbull is strong, loyal, obedient and intelligent.

Let’s just consider the above statistics. Remember earlier when we mentioned how often this dog is confused with a Bully, a Staffordshire terrier and an American Staffordshire Terrier – how easy, in a stressful situation, like being bitten by a dog, would it be to confuse a dog?

The reality is that dog bit fatalities are actually extremely rare – they just make the news more. Dog bites also rarely occur within the family, it is usually an unknown dog.

The Blue Nose Pitbull, like all Pitbull Terriers are affectionate, friendly and loving.

When raised right, they are impeccable family dogs.

They are energetic and enthusiastic – they will happily hike up mountains or play ball in the yard. Their intelligence and want to please people makes them an absolute dream to train.

There are more and more Pitbull Terriers becoming therapy dogs and we can’t forget the most decorated dog of World War I, Sergeant Stubby, who was in fact a Pitbull Terrier Mix.

They love being with people which is why they don’t tolerate being left alone for long periods.

We have seen how powerful their jaw can be so you don’t really want them chewing on your furniture if you make the mistake of leaving them too long.

They also aren’t afraid to bark – letting all your neighbors know that you left them.

With their ancestry, you would be hard pushed to find a more loyal protector.

The heartwarming story of Weela shows you how incredible these animals really are.

When the floods hit Southern California in 1993, over a 3 month period, Weela the Pitbull helped to save 30 people, 29 dogs, 13 horses and 1 cat. Before rescue teams could get to stranded dogs and puppies, Weela would cross the flooded river with stores of food.

They are stocky and muscular with an angular head.

Blue noses are exactly that, they have a blue/grey hue in their skin, eyes, nose and even toenails. You may see some with white markings on their chest or face.

They have a short coat, smooth to the touch.

Relatively low on the grooming front, a couple of brushes a week is ample. A bath and dry every couple of months throughout the year will keep their coat in tip top condition.

Regularly check their eyes and ears and brush their teeth.

Starting grooming in puppyhood; this gives you the best chance of them tolerating it and make it a positive experience; if they are hell bent on chewing the brush, give them a chew whilst you brush them.

The best time to check their eyes and ears is when they are cuddling on the sofa; happy and relaxed.

Classed as a medium sized breed, a Blue Nose Pitbull will range in size between 30-60lb (males are usually larger than females).

In general, they would utilize around 30 calories per lb of body weight so their daily caloric intake would range between 900 – 1800 calories.

When considering which food to feed your dog, ensure it is meeting all of his daily nutritional requirements; especially fats and proteins.

Blue Nose Pitbulls are supposed to be stocky and muscular in appearance, but ensure this stocky appearance isn’t just him being overweight (you should be able to see a waistline and also feel his ribs).

Remember the table above is a guide – any concerns on how your puppy is growing, consult a veterinarian.

We know that these guys are high energy so expect to walk your dog for upwards of 60 minutes per day.

They are happy being busy, they love having a job to do; chasing the ball in the park is perfect. Luckily, they do have an off switch and want nothing more than to cuddle up on the sofa at the end of a busy day.

Their high intelligence means they excel in brain games.

An easy one to keep them occupied in the house is “find it!” you will need a helper to train this one initially though:

How to Train a Blue Nose Pitbull 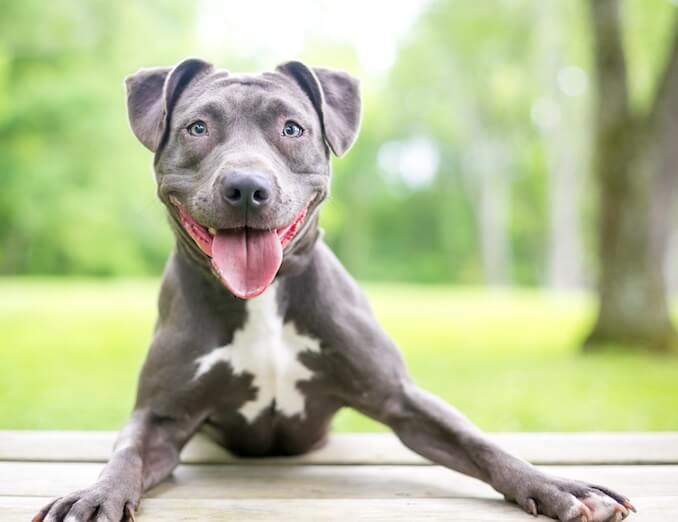 Their high intelligence makes them a dream to train.

Positive reinforcement and reward will have them eating out of the palm of your hand – literally.

We know that the Blue Nose Pitbull will respond best to positive reinforcement and reward based training – like all dogs!

Use food and toy rewards and plenty of verbal praise.

Terriers are renowned for their fast responses, the Blue Nose is no different so you have to be on the ball when training these guys.

High value rewards are best. To find out which rewards your dog places a high value on, line a selection of food treats up on the floor and see which one he eats first. Then repeat with toys – his first choices are his high value rewards.

When he’s responding how you want him to, reward him and praise him! Avoid the use of punishment and aversive techniques at all costs. They’re ineffective and actually cause problematic behaviors.

Early socialization is essential if you want a well-rounded dog.

This can be easier said that done due to the reputation that Pitbull Terriers have – other dog owners who lack understanding of the breed can be fearful of allowing their dog to socialize with a Pit Type Dog! This is where we need to be patient and to educate other dog owners.

You could also consider a “friendly” label on his collar or harness.

His training and socialization is the best chance he has at blowing the misconceptions about his breed out of the window.

As we mentioned earlier, we have the blue nose pitbull as a result of a recessive gene which causes low melanin levels.

This produces their blue/grey hues.

However, we also mentioned they are rare, which means the gene pool is pretty small. The low melanin levels and small gene pool means they actually suffer a significant amount of health problems:

They can weigh anywhere between 30-60lb.

We hope we have dispelled some of the misconceptions of the Blue Nose Pitbull (and Pitbull Terriers in general).

These loyal, courageous and intelligent companions are well suited in any family.

Perhaps not ideal for a first time dog owner, these guys thrive with an owner who understands the importance of early training and socialization.

Their high intelligence makes them a dream to train; responding best to positive reinforcement and reward.

They love hiking up mountains and running through the woods, but are equally happy chasing the ball in the park or the yard.

Still battling a bad press, but you really couldn’t ask for a more courageous companion, just make sure they’re legal in your state and not beholden to Breed Specific Legislation before purchasing one.

Let us know how much you love these dogs in the comments!

The German Shepherd Pitbull Mix comes from two breeds both concealed behind a negative stigma, making this breed highly interesting. Staunch, robust, fierce and bold yet loyal and loving. The debate continues, bad to the bone? Or soft and gooey on the inside? A hybrid [Read more…]

Pitbull Breeds & Types of Pitbulls – A List of EVERY Pitbull

With the media attention that Pitbull Breeds get, I’m sure most of us would be pretty confident in identifying this dog immediately. Would you be surprised to hear that in a study published in the Journal of Applied Animal Welfare Science, a significant amount of [Read more…]