Commonly mistaken for a hand-bag dog, or even a teddy bear, there is more to the Toy Poodle than first meets the eye.

An elegant appearance, with a well-proportioned body, and small curly locks, they are identical to the Standard Poodle with the exception of their smaller size.

The Toy Poodle is an intelligent breed who thrives on being stimulated both mentally and physically.

This dog adores play filled days, excelling in agility, and by night-time this breed loves sitting curled up next to loved ones.

Known for being a perfect breed for those owners who don’t mind extra puppy pamper sessions and are able to supply this breed with their daily physical and mental stimulation.

They may be small, but this dog breed expresses that when it comes to intelligence, size doesn’t matter! Keep on reading to learn more about this Poodle.

The Toy Poodle is a smaller version of the Standard variation and therefore retains all the superb qualities that the Standard Poodle has to offer.

Selectively bred from the Standard sized parent, to be a companion dog, they were preferred for their smaller and friendlier size.

There are three different sizes of Poodles which are all recognized by the American Kennel Club:

In order to understand the Toy Poodle, it is essential to take a closer look into the Standard Poodle’s history.

The Standard Poodle is commonly portrayed as the dog of France. Although this breed was very popular with the French Aristocrats, they actually originated in Germany!

Not always one of the most pampered pets, they were known as “gun” dogs.

This breed was known as a hard-working sport dog which was used for retrieving and hunting purposes.

Today, this dog is known for being extremely intelligent, hypoallergenic and elegant. They are not used for hunting so much, but are instead chosen for their beauty and brains!

Where Did The Toy Poodle Come From? 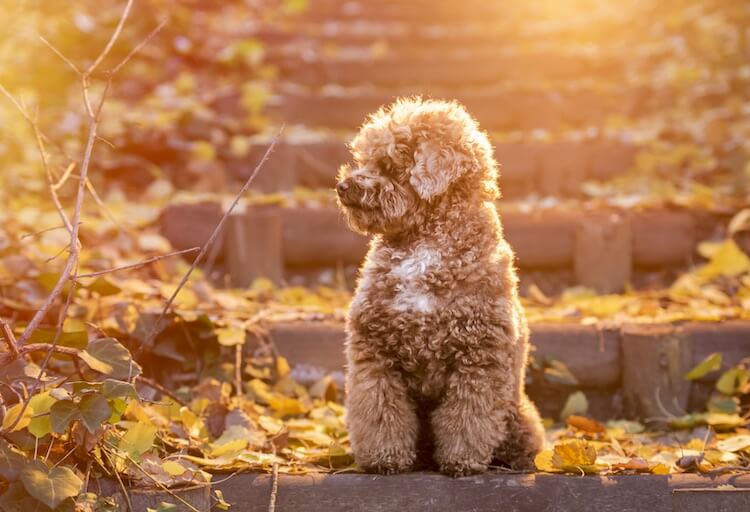 The Toy Poodle originated from the Miniature variety.

To create a petite sized Poodle, the smallest of the smallest puppies (from Poodle litters), were selectively bred during the 18th century in England.

Toy Poodles have all the charm, smarts and love that the Standard sized parent offers, they just come in a much smaller package (5 inches smaller to be exact)!

Toy dog breeds are becoming increasingly popular with families all over the US and worldwide; so it is only natural that this Toy sized dog became popular too.

A Toy Poodle puppy is actually the cheapest variation of Poodle; typically costing between $1,000 to $2,000 USD.

Before you purchase your Toy Poodle puppies, know your breeder! This is extremely important as many people may try pass off a mixed breed Poodle as a “Toy”.

Doing appropriate research and breeder due diligence will also give you an insight into your dog’s temperament and health.

Your puppy will be extremely small and cute, they also have the softest fur, so prepare for oodles of cuddles!

Toy Poodles are not known for their aggression or protectiveness and don’t have any red flags when it comes to their temperament.

However, if they are not socialized correctly, or if they become too dependent, they may suffer from shyness or separation anxiety.

Stressful environments can easily be detected by this dog. If their home is full of tension, then they can recognize this and become stressed themselves.

They do not have any major barking or howling issues. However, unwanted behaviors may develop if their mental and physical needs are not being met.

These are companion dogs, so it is safe to say that their size is anything but intimidating. However, they do take a little bit of time to snuggle up to any strangers; so try to make introductions as smooth as possible.

The Toy Poodle is compatible with a range of people and families.

If they are introduced to other pets (e.g. dogs and cats), as well as humans, then they can get on well with them. Although, this may take a bit of time.

Socialization is a normal process which all canines require. The amount of socialization at an early age will mirror the Toy Poodles ability to successfully socialization throughout its life time.

As they are a delicate dog breed, it is best to keep a close eye on them when they are playing with younger children. This is so that no unexpected injuries can occur during playtime.

Overall, the Toy Poodle usually grows up to be a well-natured puppy with a friendly personality and loves people; they may even love people more than their fellow canine friends. 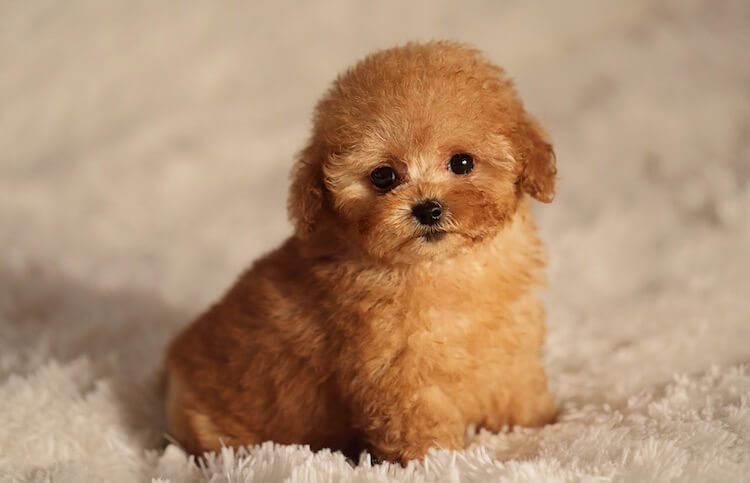 Their personality is commonly described as lively, playful and loving.

These puppies may be a little shy at first. Once they are well settled into their new home, they quickly become very affectionate companions.

The Toy Poodle is a very well-natured dog which means that they are suitable in a range of homes; from families to couples and individuals who are active or senior.

As long as their needs are met, then these dogs will thrive and their wonderful personality will shine.

This breed is definitely considered a toy sized breed.

The Toy Poodle’s size means that they are more portable and a little easier to manage than their standard sized parents.

Toy Poodle Full Grown
Being the smallest member of the family, they stand at a maximum of 10 inches and weigh between 6 to 9lb (a male weighs slightly more than the female).

The Toy Poodle is simply a smaller version of the Poodle dog; this means, that they have the same build.

Having a square head and proportioned body, with a petite and athletic build, they are very athletic and do well with agility.

Their ears flop down the sides of their head, adding to their adorable appearance.

Identifying this breed is positively easy, just look for a Poodle (but smaller)! 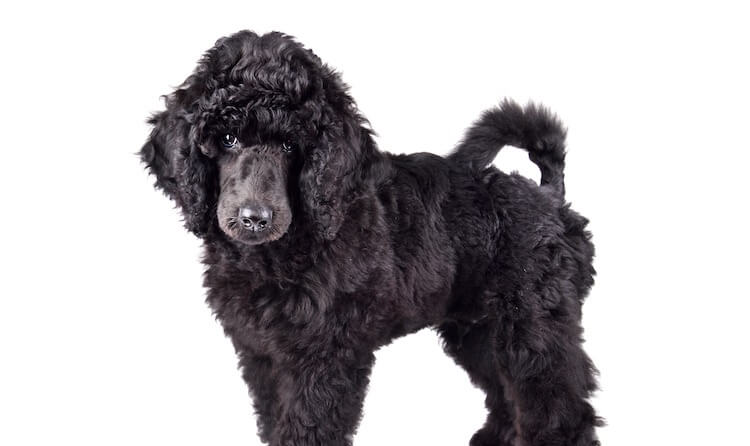 They may come in a variety of colors: white, cream, apricot, brown, black, silver and a red Toy Poodle.

This dog has also been known to come in parti (i.e. they may be more than one color):

They may even be tri color parti, and have three colors!

Good news for those with allergies.

The Toy Poodle is extremely hypoallergenic and barely sheds.

They have a short to long tight curly coat.

As puppies, they have extremely soft fur. However, this becomes a little coarser as they age and requires regular grooming.

The Poodles coat is famous for its ability to be groomed into all sorts of wonderfully wacky haircuts. This is probably why so many people take a liking to this breed!

Their coat is a little more effort to maintain, as matting in your dog’s coat can grow and may become unsanitary and painful.

Try to brush your Toy Poodle daily or at least every second day, you may also take them to get professionally clipped by a groomer.

Keep their nails clipped and don’t forget to clean their floppy ears. Dirty ears may become itchy and may develop into an ear infection.

Caring For A Toy Poodle

Caring for Toy Poodles may seem a little demanding due to their physical needs and grooming requirements.

However, a well-cared for dog is well worth the extra effort.

Like any small dog breed, being smaller than both the Miniature and Standard breed, they therefore require a smaller amount of food each day.

Ideally, you should split feedings up into two meals each day.

As they are a small breed, we recommend feeding them a high-quality dry kibbled diet specifically formulated for toy dog breeds.

This will ensure your dog is provided with all their full protein, fat and carbohydrate requirements.

Don’t forget those treats! Why not some fruit?

Like any breed, the Toy Poodle requires exercise so they are able to release all of that bundled up energy.

However, they require less exercise than your Standard breed due to their smaller limbs. If you over exercise your Toy Poodle, then they may sustain injuries.

On average, they should be supplied with at least 30 minutes of active exercise a day. This could include walks and playtime!

In fact, the word “Poodle” is derived from pudeln (a term meaning “to splash about” in German) – it is no wonder that these dogs are water babies.

Positive reinforcement goes a long way when training any dog breed (it is the most successful method of training)!

Any form of rewards such as treats or toys accompanied by praise, is just what is needed to turn any pooch into a good boy or girl.

Luckily, the Toy Poodle is a lot like the Standard Poodle; so is highly intelligent. This means that not only will they love to learn, but, it will also be a breeze to train them.

Due to their high intelligence, they also require increased levels of mental stimulation. Take time to play games with your dog, and take them out on day trips whenever possible.

Try your local dog park or different walking routes too.

The Toy Poodle is genetically predisposed to the same health issues as the Standard Poodle, these include:

Progressive Retinal Atrophy is an eye disease. The photoreceptor cells of the eye deteriorate over time, which may eventually lead to blindness if left untreated.

However, if caught early, your dog’s eyes may be saved and treatment can be successful. 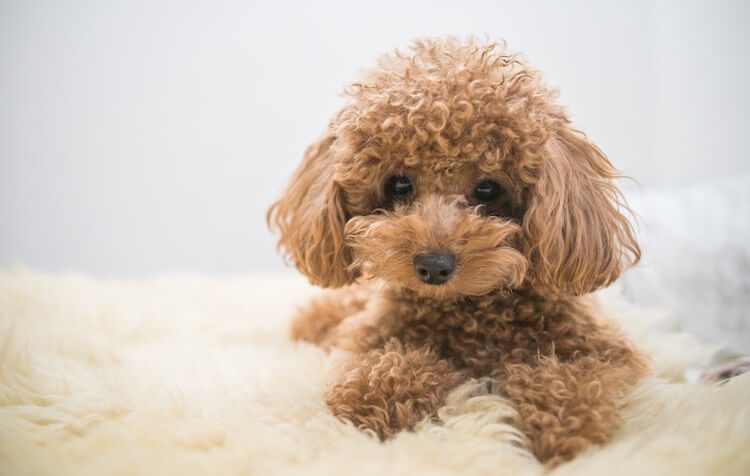 Coming from the Standard Poodle lineage, this dog is playful, elegant, loving, lively and extremely intelligent.

Training a Toy Poodle is simple, as they love to learn, which makes them great for first time owners.

Exercising this dog is a must but it isn’t too strenuous for owners either, but, they may be a little precious when it comes to their grooming.

A perfect companion for anyone looking for an intelligent and loyal hypoallergenic pup, perfect for singles, couples, families and even the seniors; this breed proves that good things can come in small packages… let us know if you own one of these dogs in the comments below.

Pitbull Dachshund Mix: What To Know Before Buying

Pitbull mixes are very popular dogs but the Pitbull Dachshund mix is an incredibly rare mix. This hybrids tend to have the wiener body of a Dachshund and the head of an American Pitbull Terrier. They have boundless energy and just like their parent breeds Continue Reading →

The Czechoslovakian wolfdog may just be the closest breed of dog to a wolf you can own, that’s right, even more so than the favorite husky. Standing at between 24 to 26 inches and weighing 44 to 57 pounds this canine is a tall Continue Reading →