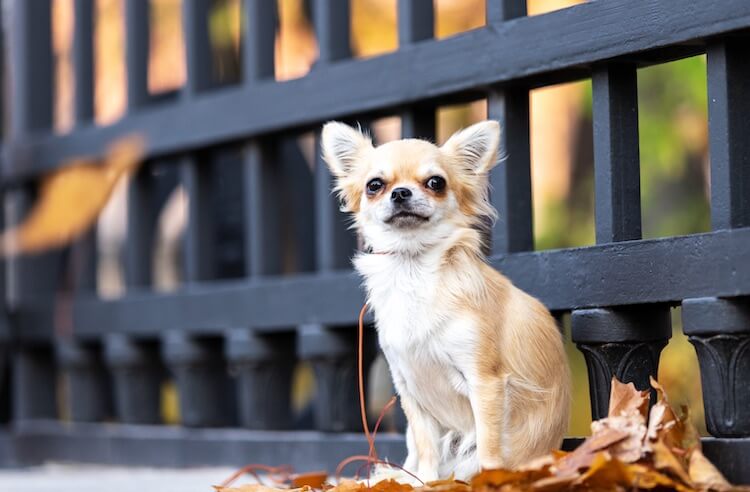 Standing between 6 to 9 inches and weighing a mere 3 to 6 pounds, the Chihuahua is one of the world’s smallest dogs.

But don’t let this fool you, their sassy personality definitely proves otherwise!

Their small size merely means that they make the perfect travel companion and have less demanding maintenance needs of exercise and care than other dogs.

Chihuahua dogs make the perfect sidekick for anyone who craves a little spark in their lives.

Named after the Mexican State, this puppy may have a little yap but they also have a whole lot of love and affection.

What else is there to know about this tiny Mexican pooch?

Here, we will share with you all of our Chihuahua based knowledge so that you can decide if this tiny dog is right for you.

The Chihuahua, named after the Mexican state of Chihuahua, didn’t actually descended from Mexico.

A popular theory is that this dog is a descendant of the Techichi breed.

The Techichi was a dog breed from the 9th century who had strong ties to the Mayans from central America.

Mayans believed that Techichis were guardians of the afterlife. Grand ceremonies were conducted and these little creatures were even mummified alongside their owners.

It was believed that the canine is man’s best friend even after death!

Later in history, the Aztecs, once they conquered the Toltec civilisation, decided that the Techichi dog was worth keeping.

They also believed Techichi breed had blessed genetics and could see into the future and had the ability to lead their owners into the afterlife.

The Chihuahua dog breed itself did not appear until the mid 1800s, nearly 1000 years after the Mayan’s Techichi which this breed descended from.

It was not until after 1884, that this breed crossed the Mexican border into the United States.

Did you know the first Chihuahua dog officially recognized by the American Kennel Club was called Midget?!

Midget was registered in 1904 and is also recognized as the first official dog by the Chihuahua Club of America.

Today, over a century later, this dog breed ranks 33rd out of the 193 recognized dog breeds and is the perfect toy dog companion.

Their popularity comes as no surprise as this tiny pooch is a fan favorite for the media and has starred in the famous “Beverly Hills Chihuahua” trilogy.

These canines are very small, because of this, they have much smaller litter sizes than typical dog breeds; only so many puppies can fit in that belly.

A Chihuahua puppy may cost anywhere from $500 to $1,500 USD! This really depends on the breeder and if any of the bloodlines have show pedigree.

It is important to know your breeder before you purchase a Chihuahua.

This will help to prevent any unnecessary health problems from being passed down through puppy-mill breeding. Meeting your puppy’s parents will also give you an insight into their behavior and temperament.

Did you know the record for the most Chihuahua puppies in a litter is 11? This world record was achieved in 2018.

The Chihuahua’s temperament may be a little feisty, but they definitely have a soft interior.

This dog breed does not do well being left alone for long periods of time. They may develop unwanted negative behaviors such as excessive barking or chewing and separation anxiety.

If you have too much of a demanding lifestyle and no room in your passenger seat – then you may want to reconsider getting a Chihuahua dog.

Doggy day care is an option if you are away for work, but socialization with other dogs must begin as early as possible as they don’t relate well to other dogs.

The Chihuahua dog breed does not have a high prey drive.

But, this does not mean they won’t defend themselves when they see fit. This breed can be rather protective of themselves, their belongings and their owners.

So try accompanying new introductions and socialization opportunities with a few of their favorite treats.

Catching these problems early is best, as well as rewarding good behavior as opposed to punishing the bad.

The Chihuahua is definitely full of hot attitude.

They are a fun-loving breed who love to play when the moment may present itself.

Their favorite spot will always be by your side.

Chihuahua dogs are known to travel anywhere; which is why you may see them popping out of a few handbags!

They make a perfect companion and they don’t mind following you while you go about your daily schedule.

Just remember, this dog craves attention. They do not do well when left alone so it isn’t advised to leave them on their own for long periods of time.

The Chihuahua breed is not friendly towards strangers and they aren’t afraid to show this.

They may bark, yap or act suspiciously towards unfamiliar people.

This trait can make for an excellent pocket sized guard dog! Or, you may just need to take introductions slowly and allow your pup to grow accustomed to new people and animals.

Typically, the Chihuahua prefers their loved ones’ attention above any canine companions.

They are also not the biggest fan of other family pets.

However, there is some good news; this breed is good with children. Just make sure they are handled with care due to their tiny and delicate bodies.

This guy may act big and strong, but this is only temporary; there is nothing this little pooch loves more than attention and affection.

Like any dog, if they are socialized properly as a young pup then they can be a little more tolerant when it comes to other animals, dogs, and people.

They are very tiny dogs but their cute, big head, eyes, mouth, and nose can be very entertaining.

On this apple-like head they have round eyes and large erect ears.

Their erect ears sit at the top of their head. However, they sometimes use their ears as a form of communication when they express their moods.

They have a slim body which is a little bit smaller when compared to their large skull.

This breed typically have brown eyes. However, they may also have green or hazel eyes, but this is usually seen in white Chihuahuas.

The Chihuahua is known as the world’s smallest dog for a reason, standing at only 6 to 9 inches and weighing only 3 to 6 pounds.

Female Chihuahuas are usually smaller than males but there is not a large difference between the sexes.

The Chihuahuas coat can come in a range of colors.

Some Chihuahua dogs have more than one color on their coat with many different markings.

The Chihuahua may have either a long or a short coat:

The short coat length is the original Chihuahua breed.

Longer coats variations of the Chihuahua dog were introduced later on and may have been due to cross-breeding with other long hair small dogs.

It is important to note that this breed has a single coat, this breed is prone to feel the cold and they can shiver quite easily.

Grooming a Chihuahua is simple and very easy. Long coated breeds should be brushed more frequently than their short coated siblings.

We recommend brushing your dog one to three times a week; this heavily depends on your dog’s coat length with the longer variation requiring the latter.

If your long haired Chihuahua is not groomed properly then this may result in dirt and knotting; this will then require scissor treatment.

Bathing your Chihuahua should be done once every two or three months.

Shampoo and conditioner may contain chemicals which can easily irritate your dog’s skin, so make sure to use dog-made shampoo only. 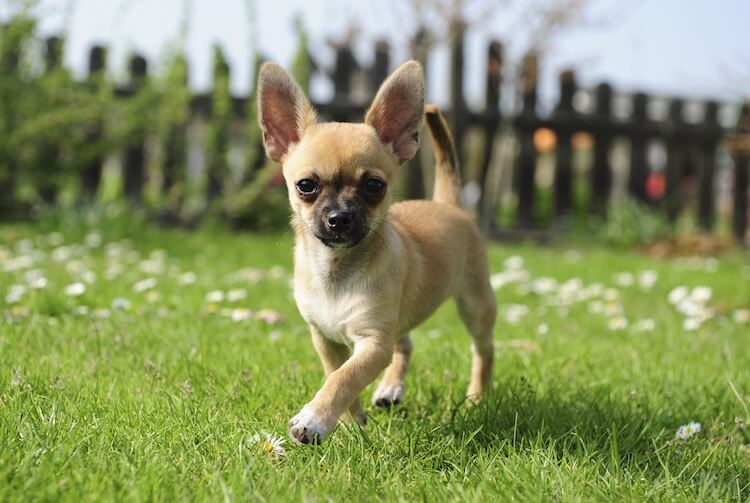 The Chihuahua is an easy-to-care-for pooch; this breed is content as long as you’re around.

They do not require excessive amounts of grooming, exercise or food.

This type of feed is formulated to cater to their daily energy, protein, carbohydrate and fat requirements.

It is important that you stick to a feeding routine while also sticking to their caloric requirements.

This breed tends to gain weight quite easily so it may be best to save those treats for good behavior and training purposes.

Chihuahuas do well on two meals per day:

The Chihuahua does not require extensive amounts of exercise like some dog breeds.

But, this doesn’t mean they don’t have energy to burn off; they are actually quite an active breed!

Daily outdoor activities such as walking, running or playing in a field, are definitely activities which this breed loves.

Chihuahua dogs may develop hyper-behaviors if their sassy and wild energy isn’t released.

Grab some toys and take them to your backyard, or the dog park, and they will be content.

Chihuahuas are definitely a little sassy and their stubbornness may make training time a little more difficult than anticipated.

Positive reinforcement, involving treats and praise, is the best method for successfully training your dog.

Try to use this method while learning basic commands and also when your Chihuahua is simply being a good dog.

Chihuahuas may be prone to developing little dog syndrome.

Small dogs with this syndrome may try to rule the house and can develop attitude problems accompanied by snapping and yapping if they find something wrong.

Socialization plays a huge part in the correct development of a Chihuahua.

Increasing your pets awareness of other dogs, animals and people around them can help improve their attitude as adults. 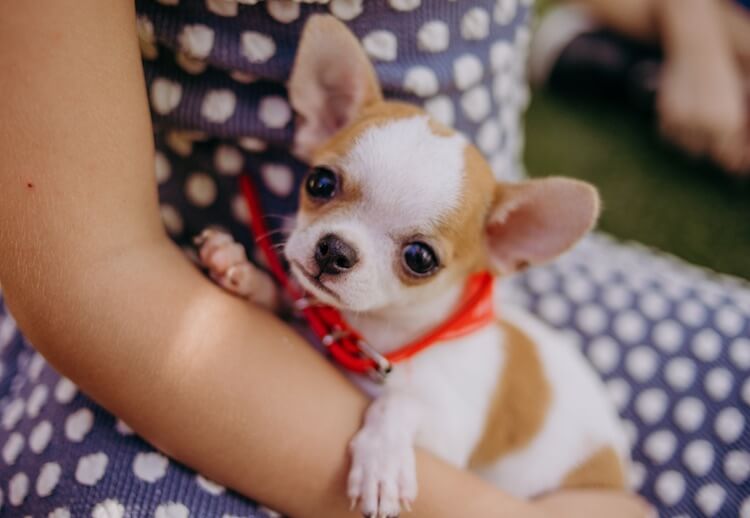 The Chihuahua dog breed is small and delicate; they are therefore are more susceptible to illness due to cold weathers.

Health issues which these dogs are genetically predisposed to include:

Patellar Luxation is where the kneecap becomes dislocated. If you see your Chihuahua in a “cute” model-like pose, with their leg up in the air, this is in fact a symptom.

This occurs when a Chihuahua has low blood glucose. If your Chihuahua is not fed enough, or even often then they may become extremely weak as they lack the sugar levels needed to provide their small bodies with energy. 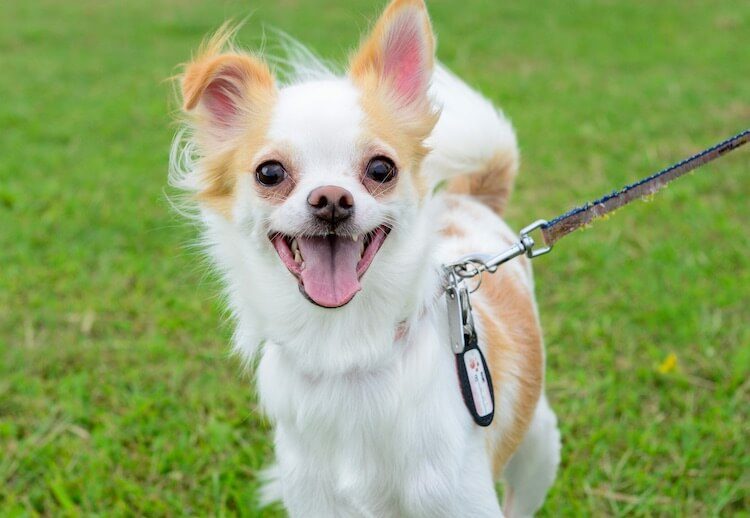 The Chihuahua makes the perfect companion for any busy individual, young individual, couples, seniors and even families!

So much activity and personality is compacted into this apple headed puppy. However, mixed in with their stubbornness and need for attention, this is a dog who has a lot of affection to share.

The Chihuahua’s limited maintenance and exercise needs, make this little breed an easy to care for companion.

So, what do you think about this saucy and sassy pooch? Tell us what you think below.

Chorkie: Learn All About This Sassy Yorkie Chihuahua Mix

Small, sassy and definitely not what you would call sedentary. A Chorkie is the proud and powerful result of a Chihuahua and a Yorkshire Terrier. A Chorkie Dog may only be 6 to 9 inches, but, do not let their tiny demeanour fool you. Once Continue Reading →

You will find a Chihuahua (“Chi”) has either an apple or a deer shaped head. Apple Chis tend to have more pronounced eyes. You will find Chis with either long or short coats in a range of colors. The Chihuahua is a stubborn, high spirited, Continue Reading →

Chihuahua Terrier Mix – What It’s Like To Own One