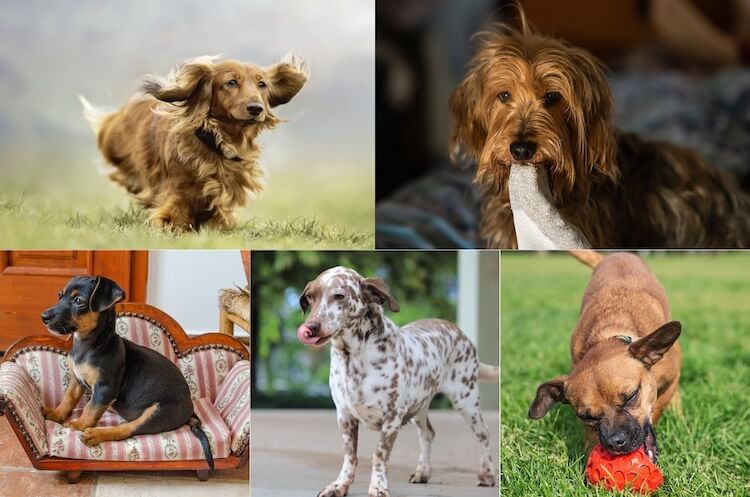 Purebred Dachshund dogs have been a firm family favorite in America for 20 years.

They currently rank in the top 15 American Kennel Club registrations!

This comes as no surprise to fans of the breed, their tenacious and loving personalities combined with their short legs and long bodies captivate all those who meet them.

These designer dogs have slowly been collecting a fan base too and so here are seven of our favorites which are too adorable and cute! 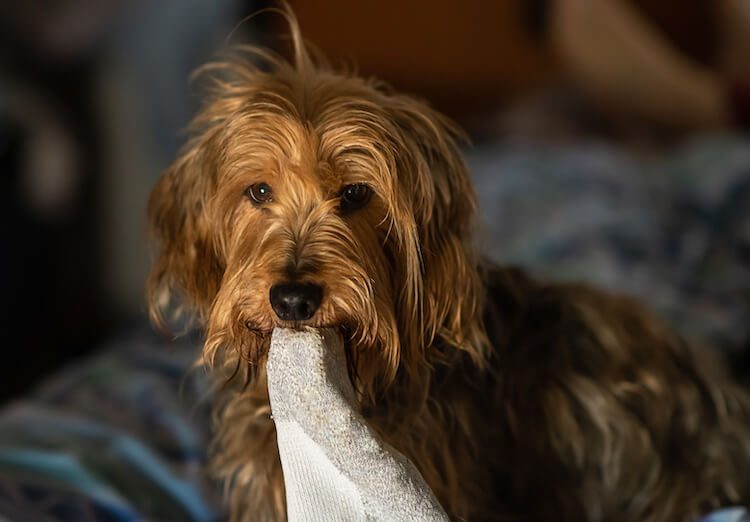 Dorkies are the smart and sassy cross between a Yorkshire Terrier and a Dachshund.

As with all crossbreeds, their temperament can be unpredictable, but generally speaking, the Dorkie is affectionate with their family, wary with strangers, and very playful.

They are a relatively common Dachshund mix, and so if you would prefer to rescue you may find one in your local rescue centre.

Dorkies can be a great match for allergy sufferers. Yorkshire Terriers are hypoallergenic and is potential they may pass this low dander coat to their offspring.

However, because this pooch is still a mix, they may also inherit the Dachshund’s high shedding coat.

If your interest in the Dorkie is due to their hypoallergenic nature, you may wish to spend some time with your new puppy first to see if they trigger a reaction.

Both Dachshunds and Yorkshire Terriers can be fickle with children.

Consequently, this Dachshund Mix does best in homes without young children, preferring adult only environments.

However, this does vary based on each breed’s temperament, whereby some can live happily in family life whereas others prefer adult only homes.

Socialization can greatly help the Dorkie to gel into a family environment.

Overall, this mix is fun and vibrant, bringing love and laughter into the homes of their owners with ease. 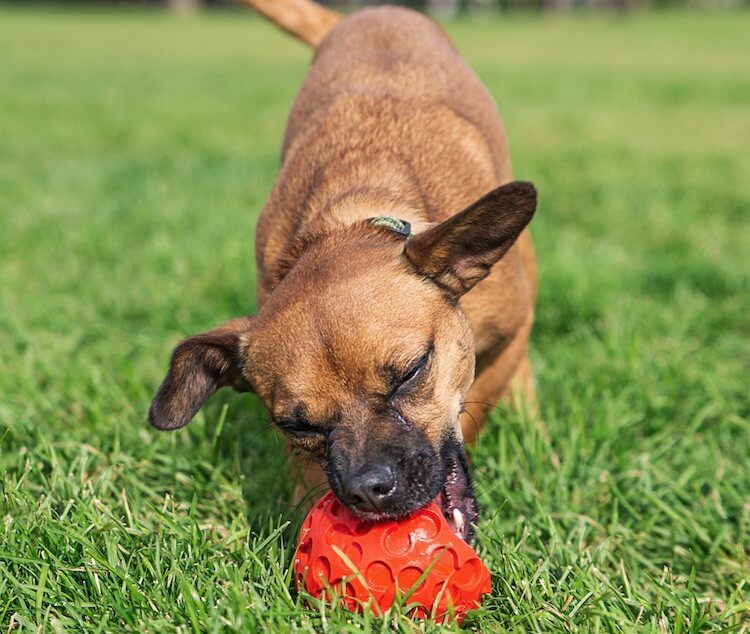 What do you get when you mix two mini and mighty dog breeds together?

Why the Chiweenie of course!

Sometimes they are just called a Dachshund x Chihuahua mix, but these sassy dogs make their presence known as soon as they enter the room.

Weighing just 5 to 10lb, this little dog has a big personality.

Chiweenies are often described as “shadow dogs”, attaching themselves to one or two of their owners and following them around like a shadow.

Consequently, these dogs tend to be happier in homes with one or two owners.

This breed is a great match for older owners as they require a low level of exercise but a high level of fuss or cuddles. On average, these dogs need around 20 to 30 minutes of exercise each day, with maybe a few games of tug or fetch on top.

Unfortunately, the Chiweenie breed type is prone to many health issues.

Their longer backs creates spinal issues, such as Intervertebral Disc Disease, and their short legs create other conditions such as Patellar Luxation.

Depending on their parents, these pooches can have very different grooming routines!

This can create some variation in coat and consequently some different grooming routines:

An unusual mix, the Basschshund is a cross between a Dachshund and a Basset Hound.

This unique crossbreed is known for their good natured and playful personalities.

As with all other hybrid dogs on this list, it is very hard to predict the appearance of the Bassetshund.

With first generation crosses (as most crossbreeds are) it can be very hard to suggest what the puppies may look like.

Some puppies may look like Basset Hounds, while others may look like Dachshunds, and others perfect hybrids (to make matters even more complicated, this can even happen all within the same litter).

This being said, generally the Bassetshund is a medium sized dog, weighing between 25 and 45lb and standing between 6 to 10 inches high.

On average, these dogs need around 20 to 30 minutes of exercise each day, with a few games of tug or fetch on top.

Consequently, its hard to guess where the Basschshund will be on this scale:

Both of these hound breeds are very intelligent, but equally as stubborn. Because of this, training can sometimes be a struggle, owners should remember the importance of being consistent with their dogs.

Overall, Basschshunds are fun and even-tempered.

They do well in both apartments and larger homes, their highly adaptable natures make them a great match for anyone. 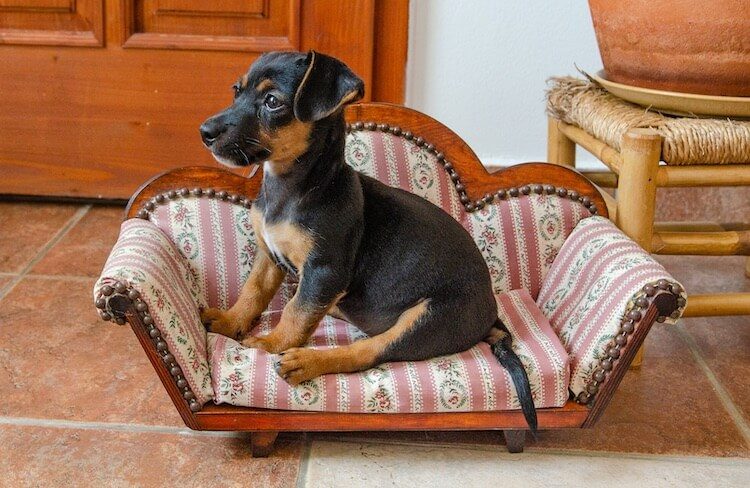 Often called the Dach Russell, or the Jackshund, this is a cross between the Jack Russell Terrier and the Dachshund.

Like other Dachshund Mixes, these dogs are known for their sassy personalities.

In most cases, the Jackshund will have a Jack Russell mother and a Dachshund father.

One thing to note is that although this is a small sized pooch, they have a very large bark!

Both Jack Russell Terriers and Dachshunds very much enjoy barking, meaning that this mix often enjoys barking as well.

These noisy dogs will often let their owners know there is something out of place. This bark is known to carry and is definitely something to bear in mind if you have neighbors close by!

On average the Jackshund weighs between 15 and 17lb. However, some dogs are on the smaller side and may weigh as little as 12lb.

Owners of Dach Russells often call them forever puppies, due to their unrelenting energy carrying on way into their adult life.

These dogs love to play, and will happily spend hours, playing tug or chase.

Both the Dachshund and Jack Russell love to dig, and so providing a sandbox, ball pit or dirt patch where your Dach Russell can dig til their little hearts are content, is a must!

Jackshunds are known to be highly adaptable and do well in all environments:

Overall, they are an affectionate and good-natured pet for all owners. 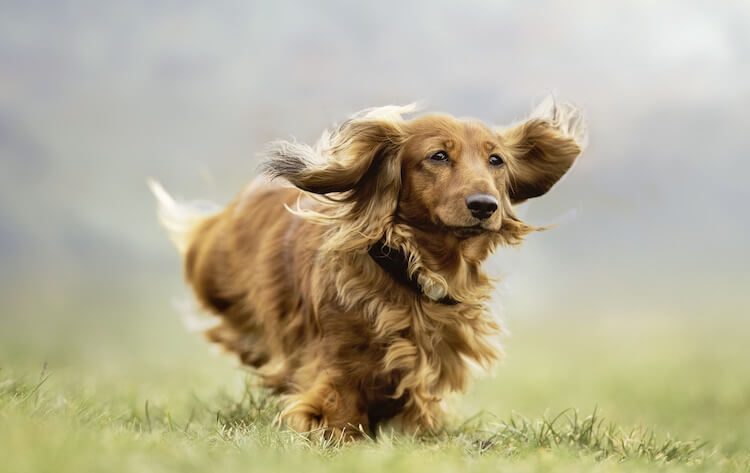 The Golden Retriever Dachshund cross is a dog of many names!

Due to the health risks associated with breeding larger puppies in smaller breeds, these dogs have a Golden Retriever mother and a Dachshund father.

Goldenshunds are known for their playful and loving nature.

Combining the affectionate and gentle nature of the Golden Retriever with the loyal and protective nature of the Dachshund creates a highly attentive and devoted puppy.

Beyond this, not much is known about the temperament of the Goldenweenie.

Due to the opposite temperaments of the parent breeds, it becomes almost impossible to predict the personality of the puppies.

In most cases, temperament will be most heavily influenced by the parental influence and early socialization of the dog.

Due to the differences in parental size, it can also be very difficult to predict the weight and height of the Golden Dox: generally, they weigh between 30 and 60lb, and stand between 10 and 23 inches tall.

Diet is a key part of owning a Goldenshund.

These dogs are known to have somewhat sensitive stomachs, and consequently their diet needs to be watched closely.

Whether you choose to feed raw, dry or wet, diet should be consistent. Try to select a high quality kibble that has meat as one of the top three ingredients.

Dorgis make excellent family pets as generally they get on very well with children and adapt easily to family life.

Although the origin of this mixed breed is unknown, there is a lot of rumor that Queen Elizabeth II may have been the one to first breed the Dorgi, being a big fan of both parent breeds.

This mix is a dedicated and gentle companion pet known for being loyal to their owners through thick and thin.

Dachshund Corgi mixes can be both types of Corgi (the Pembroke and Cardigan Corgi).

Most of these Dachshund Mixes are bred with a Pembroke due to their popularity, but it does vary from breeder to breeder.

One thing to note about the Dorgi is like other crosses on this list, they are known to suffer with separation anxiety.

It is possible to work on this with your puppy by leaving him for short periods (no more than a few minutes) and slowly building up to longer time spans.

Leaving your puppy with things to do and giving lots of praise on return will help to reinforce this process.

Although they may be small, cute and cuddly, Dorgis are not lapdogs.

Corgis are herding dogs and consequently these dogs are known to be very active, needing around 60 minutes of exercise daily, plus mental stimulation to keep them busy.

Dorgis come in a variety of colors:

Generally speaking their coat has one or two of the colors above, but very occasionally a tricolor appears!

Last, but not least on our list is the Dachsatian, they are also sometimes called the Dalmachshund.

Thought to have come about during the designer breeding movement, it is likely this crossbreed began due to the desire to create a Dachshund with spots. Beyond this, very little is known of their origin.

Due to the difference in parental appearance, there is a large amount of variation in what you may end up with.

Dalmatians can weigh anywhere between 35 and 70lb, whereas the smaller Dachshund weighs 16 to 33 lb! This puts the weight of the Dachsatian anywhere in this bracket.

Dachsatians are known for their playful and loyal personalities.

They are friendly, both with new people and dogs, and are always up for a cuddle on the couch.

This crossbreed can do very well with families, their fun and outgoing nature is a great match with children.

However, whilst Dachsatians love to play, don’t mistake them for a pushover.

Both of the parental breeds are known for their stubborn nature and unwillingless to compromise.

This can lead to some protective behavior over items. From a young age, owners should be asking their pets to trade items they wish to keep for rewards, such as tasty treats.

Dachshund mixes come in all shapes and sizes!

Some of these breeds are better with younger children than others.

It is therefore important to consider compatibility with the whole family before purchasing a dog. However, this can be somewhat variable, a well socialized dog can grow to love children.

As each mix is completely unique, it is important to not only spend time doing research but to get to know your individual puppy and uncovering their personality.

Do you have a Dashing Doxie mix at home? Leave us a comment down below telling us your thoughts.

Clever, loyal and goofy – this is exactly what we get with the Bernedoodle. A happy-go-lucky family dog this mix is a Bernese Mountain Dog crossed with a Poodle. First bred in 2003 by Sherry Rupke this dog is intelligent and goofy with a spoonful Continue Reading →

From Paddington and Winnie-the-Pooh to Rupert and Baloo we all remember our childhood days of cuddling a big fluffy bear. Now you want to own your own pocket sized teddy bear dog? Big and small, from the Havapoo to the giant Sheepadoodle, these dogs come Continue Reading →