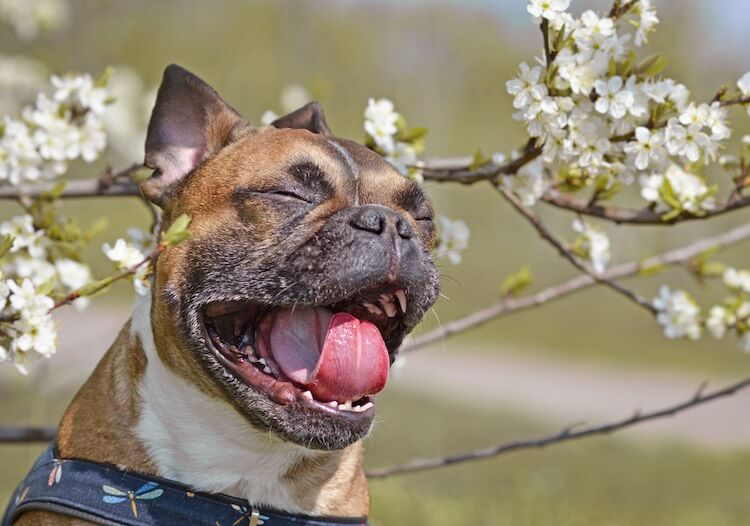 In humans, we usually sneeze if something has irritated our nose like a strong cologne or room fragrance.

Whilst strong fragrances can irritate their nose; there are several other reasons why dogs sneeze: infection, allergies, mites, abscesses and excitement.

Dog’s don’t tend to sneeze for the same reasons humans do: the most common cause of sneezing in humans is when we are suffering from a common cold or influenza.

To understand more about your dog’s sneezing, here is our overview of why they sneeze (including when they are excited or playing), common symptoms, and what you can give your dog to stop their sneezing.

7 Reasons For Why Dogs Sneeze

1. They Are Excited During Play

The most harmless reason for a dog sneezing is excitement.

Whilst it remains a mystery as to why it happens, small breeds can start sneezing during play!

For other puppies and playmates, it can become confusing if they are not used to this behavior, but it’s totally normal!

A dog’s play sneeze sounds somewhat different to a normal one (which expels an irritant), if your dog does it, you’ll soon know about it.

Whilst this type of sneeze is most common in smaller dog breeds, it is still important to monitor large dogs’ behavior.

It rarely causes issues with other dogs, but observe their body language, to ensure other dogs are understanding the sneeze!

Some dogs will sneeze to calm a heightened situation, so be mindful whether your dog is doing it out of excitement or perceives a stressful or tense situation.

2. Your Dog Is Allergic To Something In Their Environment 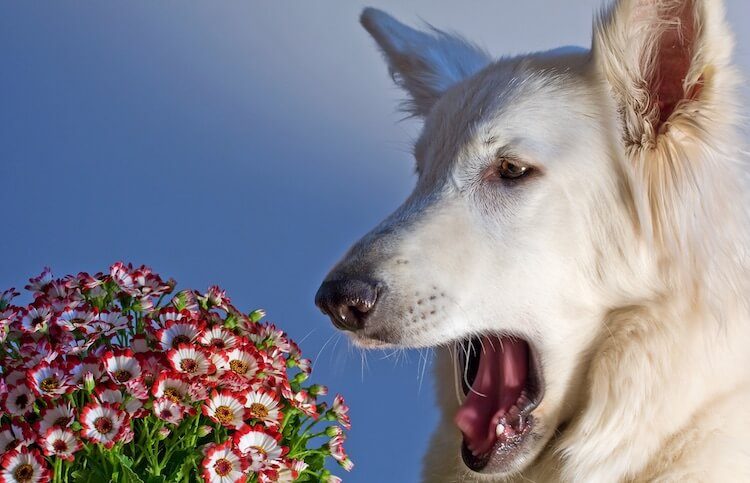 Just like in humans, a sneeze serves to expel an irritant in the respiratory system. Dogs can experience a range of airborne environmental allergies including:

Canines can also have sensitivities to fragrance and products used in the home like cleaning agents, diffusers, plug-in air-fresheners, fabric softeners and detergents.

If you notice your dog sneezing a lot, consider what is in the environment or if you have changed anything recently.

It could be new detergents, fabric softeners, candles, room fragrance or even cologne. Remove any recent new additions to see if it helps calm your dog’s sneezing.

If you notice your dog’s sneezing is seasonal (being triggered by grass or pollen), then try walking your dog at the coolest part of the day, when pollen levels are at their lowest.

You can also rinse them off with cool water after they have been outside to stop them brining any pollen or grass into the home.

If these steps still don’t seem to help, you could speak with your veterinarian about using an antihistamine to help your dog through the summer months.

3. Your Canine Has An Infection or Virus 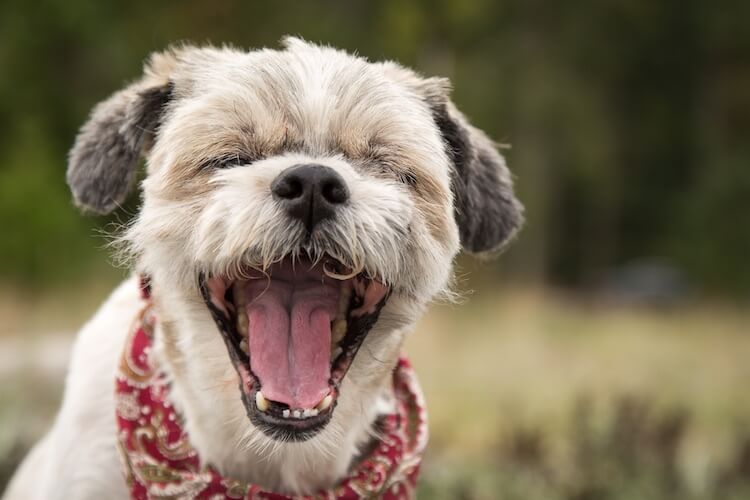 Just like when humans sneeze because we have a common cold or the flu, dogs too can sneeze when they are suffering from an infection.

Most commonly, it’s a fungal infection when the nose comes into contact with outdoor dust, hay or grass clippings.

If you notice other symptoms alongside dog sneezing (pain, discharge or bleeding) it could potentially mean an infection – your dog will most likely be prescribed antibiotics to manage the infection.

In addition to fungal infections, dogs suffering from a tooth infection can also sneeze.

This is because a dog’s upper pre-molar roots are in close proximity to their nasal passages. The infection and associated inflammation can cause irritation in the passage resulting in a few sneezes.

Like all things health related, your dog stands a better chance of fighting infection when they have a strong and healthy immune system, so keeping your dog well-nourished and active is a great first line of defense.

4. They Caught Mites From Digging

Microscopic little bugs, known as mites, can take hold pretty much anywhere in and on your dog’s body, including their nose and sinuses!

These bugs cause huge irritation which results in your dog wanting them out, they will continuously sneezing in a hope to expel them!

Due to the chronic nature of this sneezing, it often results in nosebleeds and nasal discharge.

It is also possible you dog can catch mites from another infected canine when they greet, nose-to-nose.

Luckily, mites are visible during veterinarian examination. Swabs or scrapes will be taken and examined under a microscope and medication is prescribed which kills them.

5. They Have An Abscess From Fox Tail Hair

An abscess is a collection of pus that has built up in the tissue of your dog’s body which is usually caused by a bacterial infection.

We have mentioned infection as a cause of sneezing previously (#3), but it is easy for an abscess to be formed by a foreign body and then resulting in an infection.

Fox tails are a common cause of issues in your dog’s nasal passage.

Common in California and the rest of the West, they scatter across the land when dry and their tiny spikes cause issues when burrowed into the ground (they pose a risk to dog’s paws, nose and ears)!

If you suspect your dog has a rogue foxtail embedded somewhere, then veterinarian attention is crucial.

They will be able to examine your dog and remove the culprit. They may have to drain the abscess and your dog will likely be prescribed antibiotics to fight the infection.

6. Your Dog Is Sneezing Because They Have A Tumor 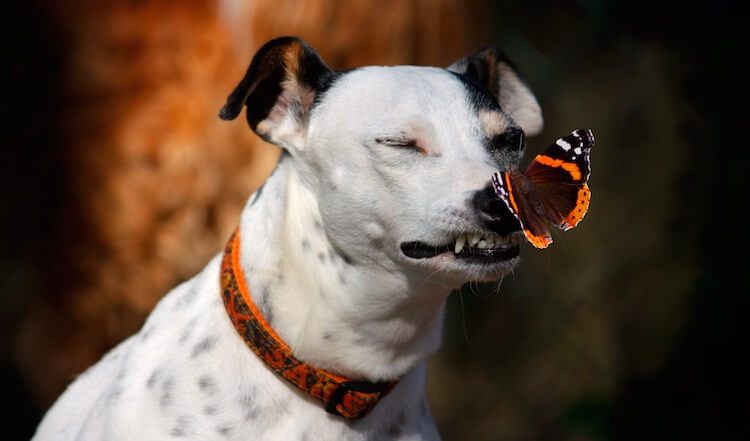 Symptoms of tumors in dogs overlap with other conditions listed in this article, like nasal discharge and sneezing, but facial deformity is the main difference.

Tumors obstruct airflow so you may notice your dog is struggling to catch his breath or panting excessively during exercise.

Treatment is often palliative (i.e. keeping your dog out of pain), with risk of further complications.

If your dog is showing any concerning symptoms like excessive sneezing, inflammation, nasal discharge and facial deformity, seek veterinarian attention for a full examination immediately. 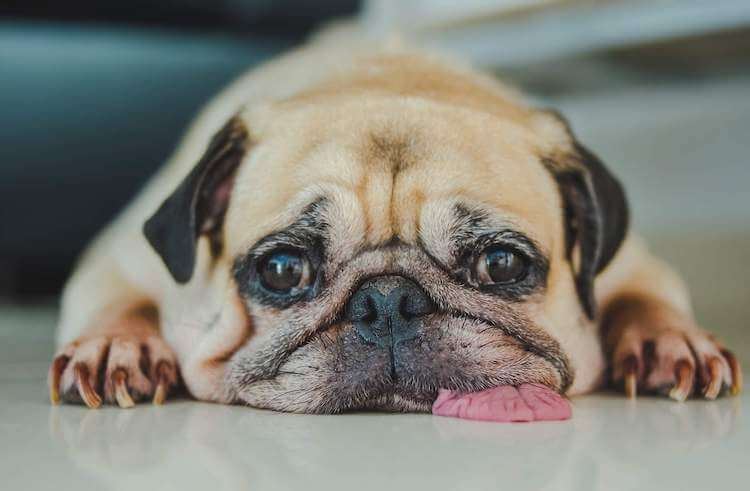 Unfortunately, along with a range of other health issues, brachycephalic breeds are also more prone to sneezing.

Due to the shape of a dog’s head, they simply struggle to breathe.

Reverse sneezing is also common in these breeds

This type of sneeze is not like a typical one (used to expel air), but a reverse sneeze draws air quickly, almost like a snort.

They can be caused by excitement or an irritant and can last from a few seconds to a minute. They can be alarming to see initially, but when you know what’s going on, it is normal for particularly flat-faced breeds.

Why Is My Dog Sneezing When Excited?

It is still unclear why dogs sneeze when excited; we just know they do.

When your dog is playing, and shows no other symptoms of concern, it is unlikely to be anything to worry about.

You will easily be able to spot this type of sneeze as it is higher pitched than typical sneezing.

Why Does My Dog Keep Sneezing

Your dog may be sneezing for a range of reasons:

If you are concerned about your dog’s sneezing then always seek veterinary attention.

Why Do Dogs Sneeze When Playing?

It is still unclear why dogs sneeze when they are playing, however some breeds do it to diffuse a tense situation.

Can Dogs Get Nasal Infections?

Yes, they can get nasal infections.

You may notice other symptoms like discharge or nosebleeds. You may also notice general malaise or lethargy and even an increased temperature.

What Is Reverse Sneezing In Dogs?

This is common in flat-faced breeds and is often nothing to worry about.

As opposed to a regular sneeze expelling air, a reverse sneeze is inhaling air as quickly as possible. It can be caused by an irritant or simply trying to get more air into their respiratory system.

A dog will sneeze for many different reasons. Some of these reasons are the same for us humans (when something is irritating them) are some are not (because they have brachycephalic syndrome).

Dogs can have allergies; it may be a strong cologne, a room fragrance or some dust which will cause them to sneeze.

Sometimes it can be seasonal, so for the warmer months, your do may spends most of his time sneezing. You can manage his environmental exposure or speak to your veterinarian about antihistamine management.

When your dog’s sneezing is paired with other symptoms like discharge or bleeding, there may be a serious infection or illness, so speak with your vet for further examination.

Most sneezes are nothing to worry about, just like reverse sneezing, but if it is excessive or your dog is showing other signs of ill-health, it’s always worth getting them checked out.

As a dog owner, we know you’d be lying if you said you’d never been whacked across the leg or in the face by a wagging tail! If it was a long-haired dog, you probably got away unscathed, but if it was a Labrador, you Continue Reading →

So your dog’s ears are feeling a bit warm, his nose is a little dry and warm too! Could it be a fever? How do you tell if a dog has a fever? In this article we will look at how to detect a fever, Continue Reading →