Looking for your next agility dog or maybe just a playmate for your children?

Look no further than the Dutch Shepherd; these incredible dogs can do both!

Even though the Dutch Shepherd may not be as famous as some of its well-known Shepherd cousins, they are in fact one of the healthiest and easiest Shepherd dogs to train.

Behind their almond-shaped brown eyes is a loyal, reliable and affectionate friend for life.

This lively and energetic dog is suited to any active family with children or even sporty singletons.

Unlike most dog breeds, the Dutch Shepard still closely resembles its ancestors back in the 1800s, continue reading to find out why. 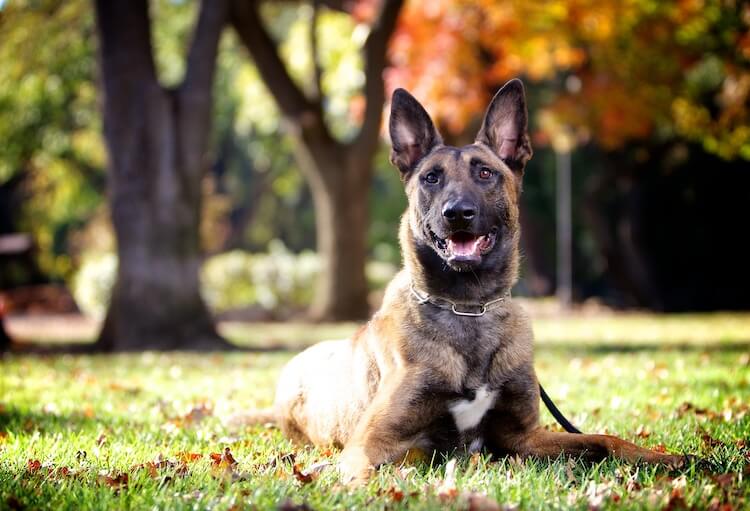 Dutch Shepherds are an all-around friendly dog, bonding well with children, other dogs and even household pets.

The guard dog in them can make them unsure of strangers, however, this can be managed with early and frequent socialization.

With lots of energy and brains, this eager to please dog is a pleasure to train.

This makes them great working dogs, perfect for agility and obedience competitions! Or maybe you’re just looking for a companion? With a fun-loving and loyal personality they will soon become part of the family.

The Dutch Shepherd was historically used for herding sheep and cows, unsurprisingly Kennel Clubs classify them under the herding group, as are their Shepherd cousins.

More recently, they are some of the best canines for fighting crime and are part of many police search and rescue teams. 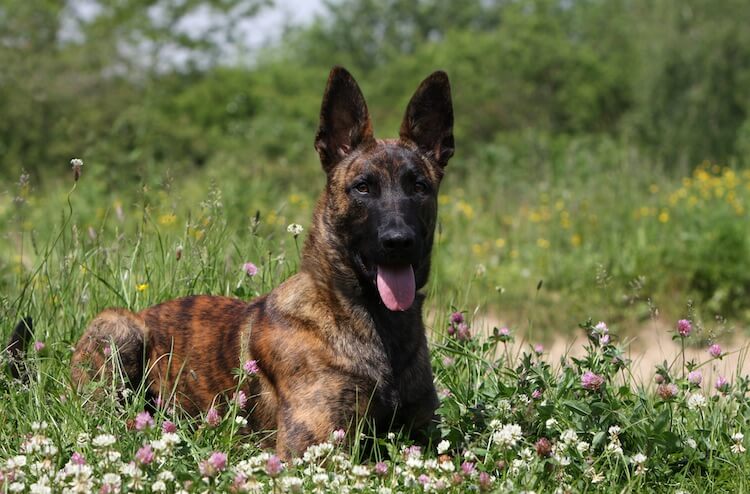 The United Kennel Club and the FCI recognize the Dutch Shepherd as a herding dog.

This breed is yet to be recognized by the American Kennel Club in a specific breed class, however, they do classify them in the miscellaneous class because their numbers and popularity have significantly increased in the United States.

Some official breed clubs include: 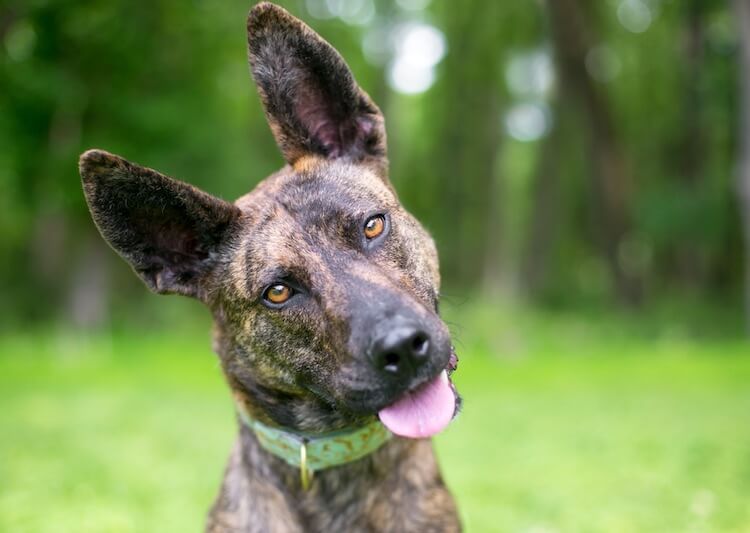 The Dutch Shepherd originates from the Netherlands, where in the 1800s it began to diverge from its cousins, the German and Belgian Shepherds.

Originally used as multi-purpose farm dogs for herding and livestock control (i.e. keeping chickens out of gardens) they found their calling as military and guard dogs.

This talented dog nearly became extinct, but, with its adaptable skills they were quickly picked up as ideal police and military dogs.

Since its first breed standard (dating back to 1898), this dog has changed very little, unlike their Shepherd cousins who have been mixed with many breeds.

It was also in 1898 that it made its first appearance in the US. 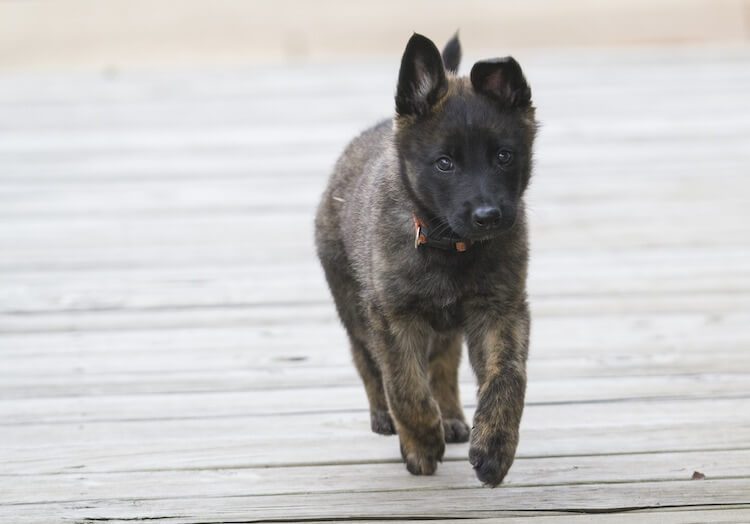 If you are looking to adopt, or buy, make sure they have not been crossed with another Shepherd dog as they can have similar looks to their cousins. They should always have a brindle coat.

Litter sizes can vary from 6-10 puppies.

However if you opt for adoption, prices can range from anywhere between $50 to $500 USD.

If you are looking for a Dutch Shepherd rescue there are two organizations you can contact:

A typical 8-week-old puppy will weigh between 11 to 17 pounds and should be no taller than 9″.

They are usually full grown at around two years of age and mentally matured around three.

The Dutch Shepherd dog is fiercely loyal and will bond closely with you and your family.

Keep in mind, this loyalty, mixed with their high intelligence can cause anxiety and boredom when left alone. So think about doggy daycare if you intend to leave them for long hours.

Fancy taking up a new sport?

The Dutch Shepherd is energetic, and enthusiastic to work, with plenty of stamina which makes them the perfect playmate for agility.

We can guarantee you will get exhausted before they do!

They have an independent nature, meaning on occasion they can be stubborn and have a mind of their own therefore strong leadership is key. 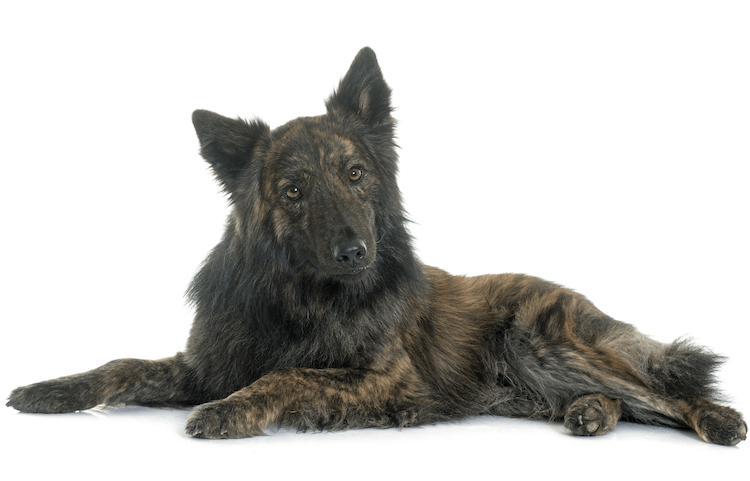 Naturally very friendly with all creatures big and small, Dutch Shepherds will show mountains of love and affectionate to any child, animal or pet that they are familiar with.

They are generally alert around strangers which can make them a little standoffish but once introduced, a well-socialized Shepherd will soon welcome them into his home.

Small wild animals, like squirrels or rabbits, may catch the attention of this herding breed. But with not an aggressive bone in its body a game of chase is the most that will happen.

Good socialization and training will ensure unwanted behaviors don’t occur allowing you and your family to soak up the love and enjoy this faithful companion.

Historically guard dogs, this dog won’t hesitate to warn any stranger they’re on their territory.

However, they aren’t renowned for barking unlike some small and toy breeds.

Known for their instinctual herding skills, differentiating between a threatening and non-threatening situation maybe a little difficult for them.

Don’t be surprised if you find them running after the occasional squirrel.

A wonderful quality in the Dutch Shepherd is their devotion for their owners. Once that bond is made between owner and dog it is virtually unbreakable.

They have been known to sacrifice their own lives for their loved ones. 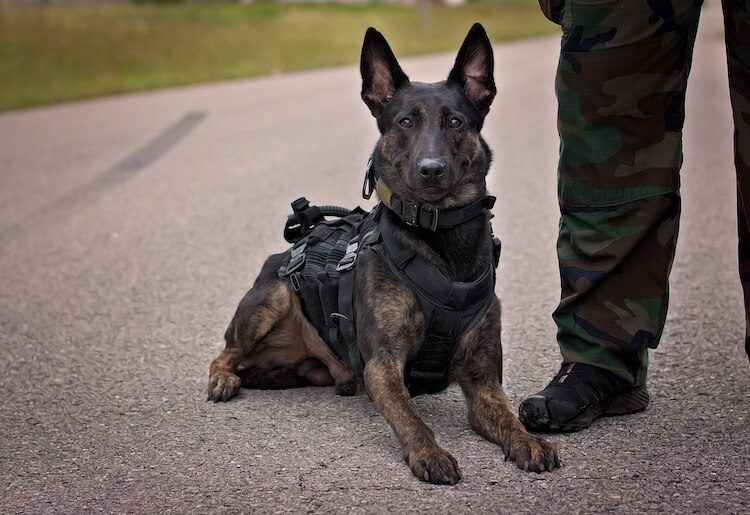 They are classified as a medium-sized dog, with males reaching a maximum height of 24.5″.

Females are usually an inch or two shorter.

Both sexes average anywhere between 40 and 75 pounds.

Often confused as a brindle colored German Shepherd, this is actually the first clue you are looking at a Dutch Shepherd: the brindle coat is unique to the Dutch Shepherd.

They are smaller and stockier in size compared to their cousins too.

As you can imagine working for the police, this powerful breed has a muscular build to match.

They are well proportioned, with a wedge-shaped head, almond eyes and pointy triangular ears. The length of their body should be slightly longer than they are high.

The brindle color can either come in gold or silver, which can appear in a variety of shades.

The gold can range from a light sandy color to a deep red, while the silver can appear more or less dark.

As they appear in a monochrome light grey, blue Dutch Shepherds go against breed standards but are becoming more popular.

They have three different types of coat types (all with a wooly undercoat):

Brushing frequency varies depending on the coat type:

As their coats are water resistant, bathing only needs to be done when required, so after a session of rolling around in the mud.

Make nail checking apart of your grooming routine, looking at the length of the nails weekly and trimming when necessary.

Cleaning their teeth a few times a week can avoid dental and gum issues. But above all, a healthy mouth starts with a healthy diet! 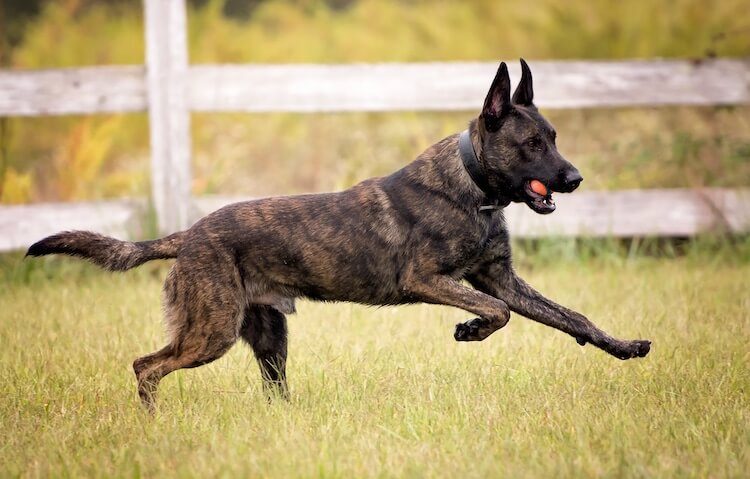 Lots of energy usually means lots of running and eating!

As an active dog breed the Dutch Shepherd requires a well-balanced, high protein diet. This can be met with a high-quality dry feed formulated for medium-sized athletic dogs.

They will eat between three to four cups of kibble per day.

Puppies need four meals per day spread out throughout the day to avoid bloat.

At 6 months old this can be reduced to three meals, and then at 12 months, reduce their feeds down to 2 meals.

Once fully grown, three cups of dried food spread out in two meals is sufficient.

Dutch Shepherds need a mix of mental and physical stimulation.

Their favorite exercise is to run, run and run some more!

Mix this with a purpose, or mental stimulation, and you might have a chance of tiring them out. Try playing frisbee, fetch or flyball for at least 30 to 60 minutes a day.

Just remember to bring a bowl and some water for you both on those hot days!

Letting them off leash shouldn’t be a problem as they are very sociable and great around other dogs. As with any dog, on leash is best around roads as they can be impulsive.

On rainy days and lazy days it’s great if you have a yard so they can run around and still get their daily exercise.

Dutch Shepherds are the smarty-pants out of all the shepherd dogs.

Coming out top-of-class when it comes to obedience, agility and herding.

With such a high IQ, positive reinforcement is the way to go. They will quickly pick up which behaviors result in a treat and lots of praise.

Mentally stimulating games are the best!

Keeping them occupied with puzzle games will avoid them getting bored and reduce destructive behavior.

If you fancy something a little more competitive, agility games are full of fun and will help you gain trust and bond with your dog.

Socialization should start as a puppy (before they reach 10 weeks).

Getting them familiar with the outside world is key for a well-balanced dog.

Lack of socialization in Dutch Shepherds who are naturally independent and powerful can potentially end with an aggressive and fearful dog.

Compared to other German Shepherds, the Dutch Shepherd suffers with the least health issues.

This comes from its rarity and strict breeding rules resulting in limited hereditary diseases.

However, as they are part of the Shepherd breed family the number one issue to look out for is hip dysplasia.

Eye issues such as Goniodysplasia are possible; this is where a build up of fluid within the eye can in extreme cases, cause blindness.

Another common eye issue is Pannus where a grey-pinkish film covers the eye, if left untreated, it will also result in blindness.

Summary: Is the Dutch Shepherd the Right Dog for You? 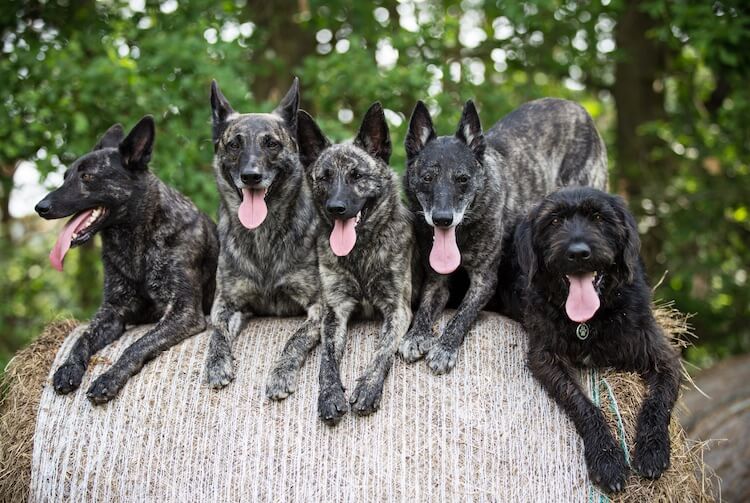 Dutch Shepherds are no couch potato, so if you are looking for a dog to watch TV with, they are not for you!

These lovable dogs do require a lot of exercise, they are very smart and easy to train so anyone willing to put in the effort will form a strong and lasting bond with them.

Nothing but a kind-hearted and playful breed, Dutch Shepherds have a wonderful character and will fit in perfectly to any families’ active lifestyle.

A wonderful temperament, mixed with a beautiful brindle coat, you can guarantee they will stand out for all the right reasons at the dog park!

Let us know what you love about this breed in the comments below.

Scrolling through social media you often come across fluffy dogs who you absolutely fall in love with. Not surprisingly, due to their teddy bear appearance, these typically white dog breeds are usually high on this list of love at first sight! But there is a Continue Reading →