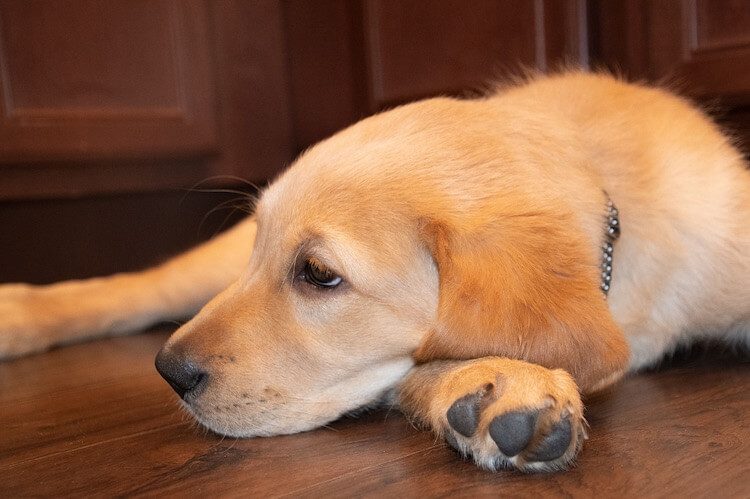 The Golden Retriever Lab Mix is a combination of two of America’s most loved family pets!

Also known as the Golden Labrador, this is a fun-loving pet, is a crossbreed of the 1st and 3rd most popular breeds in America.

It is no surprise the Labrador Golden Retriever Mix is an extremely popular crossbreed. Despite this, not a lot is known about their history.

Loving and loyal, they make the perfect dog for those families who are torn between a Golden Retriever and a Labrador.

Let’s take a look at them in a little more detail; from health and feeding to exercising and grooming, this is your comprehensive overview of this dog.

What Is A Golden Retriever Lab Mix?

This dog is a designer crossbreed, first seen in the 1990s.

A delightful crossbreed, the Golden Retriever Lab Mix was first bred to be a guide dog.

They have also been used in other professions, such as a search and rescue or drug detection dogs.

Over the years, the Golden Retriever Lab Mix has gained popularity as a family pet.

As the Labrador Golden Retriever Mix is a crossbreed, they are not recognized by any kennel clubs, including the American Kennel Club (AKC) and Fédération Cynologique Internationale (FCI).

Both of the parent breeds are recognized individually by the AKC and FCI. 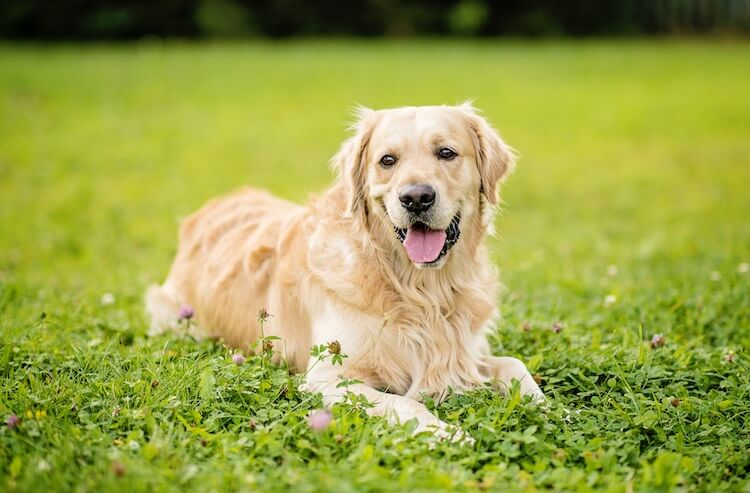 First seen in Scotland in the early 19th Century, the Golden Retriever has been a loyal companion ever since its first breeding.

This delightful breed has been seen in many roles over the years, originally bred to be a gun dog but is now more commonly seen as a family pet or service animal. 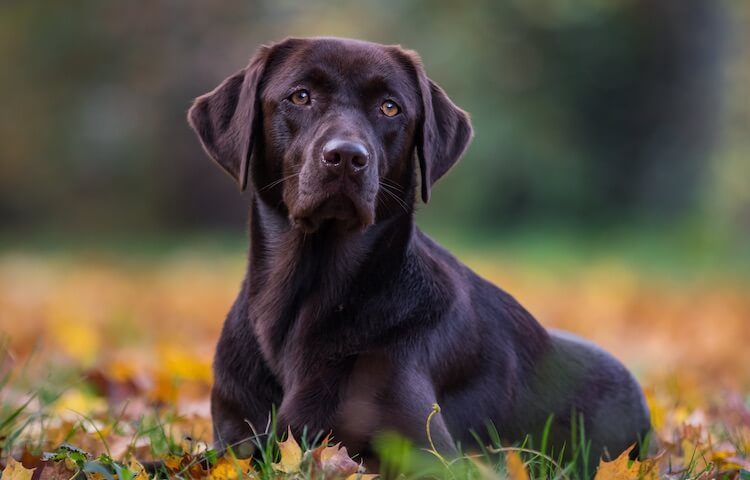 The earliest recorded Labrador Retrievers were documented in Canada in the early 19th Century.

Like the Golden Retriever, these dogs have had many roles through the years.

Originally used as assistants to fishermen, through the years these dogs have also found work as gun dogs, service dogs and family companions.

Discover more about the Golden Retriever Lab Mix, download our complete guide to this Lab mix.

As puppies, this dog breed is known to be very clumsy!

It is often said their big paws and long legs are always getting them into trouble.

In most cases they will grow out of this by the time they are 18 months old and have reached maturity, but this is not always true and they may retain their puppy like nature.

Depending on the parent there can be anywhere between four and twelve puppies in a litter.

A Golden Retriever Lab Mix is often sold as a premium puppy and because of this they cost between $1,200 and $3,000 USD.

However, for dogs that have pedigree parents, or show ring parents, prices can be as high as $5,000 USD.

Below is an approximate growth chart for a Golden Retriever x Lab Mix puppy.

Although the chart is an approximation, and it is healthy for your dog to be slightly larger or smaller than estimated, a large variation in weight may warrant a trip to the vet.

As loyal as they come, the Golden Retriever Lab Mix is not a guard dog.

They are more likely to kill you with kisses than any kind of violence!

This being said, they can be incredibly vocal when bored; howling and barking to pass the time.

In some cases, they have been known to be noisy when excited too, this may be something to consider if you have neighbors in close proximity.

The Golden Retriever Lab Mix is the perfect family dog.

They have the patience of an angel, and love the company of children; who else could they convince to throw a ball and play games for hours?

Known for being incredibly good natured around young children, and will put up a good deal of rough play, they never lose their patience.

This same patience is often extended to other household pets too.

Like their parents, Golden Labradors are incredibly affectionate with other animals, especially when socialized from puppyhood (Cats, Guinea Pigs, Rabbits and other dogs… this dog does not care)!

This dog is often noted to have endless enthusiasm and energy, they are always up for a game or two, and do not do well with long periods of inactivity.

Family dogs through and through, it isn’t a good idea for them to be left in the garden or in the house by themselves.

When left they may become destructive due to boredom… these dogs can make mean work of your slippers or carpet!

These fun, bubbly dogs have an infectious optimism in life.

Everything is an adventure to the Golden Retriever Lab Mix, from a trip to the store or a walk to the mailbox. They are friendly, there is no such thing as a stranger to this dog… only to-be-friends. 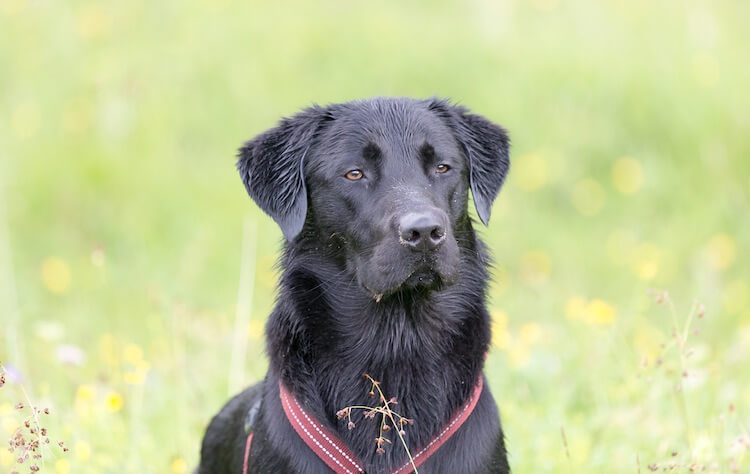 This mix is classified as a medium to large sized dog.

Mixed breed dogs are something of a genetic lottery, each one is totally unique!

Some Golden Retriever Lab Mixes will be the perfect hybrid with a 50/50 mix, whereas others will appear to take after one parental breed more than the other.

The one thing they all have in common is their cute faces and sunny disposition.

In most cases, this dog has a large square head with floppy ears, athletic looking bodies and long legs.

They have large brown Golden Retriever eyes, that are often described very loving. However, on very rare occasions they may have blue eyes.

It is often noted that a Golden Retriever Lab Mix will have a “racing stripe” along their back. This is a darker stripe along their spine from the base of their neck to the tip of their tail.

Golden Retriever Lab Mixes are most often yellow, but, they can also be seen in: gold, black, red or even brown.

Like their appearance, it is difficult to say what texture their coat will have, so it can vary massively between litters.

In general, this dog will have a short, dense coat, that is often straight but can be wavy on occasion.

Unlike other Golden Retriever Mix Breeds, in most cases this dog will have a single coat as opposed to double.

Their coat can shed moderately so a consistent grooming schedule is required.

They are mild to moderate shedders all year-round, and as a result weekly brushing is required. Being an affectionate dog, you shouldn’t have any problems convincing them it is time for grooming.

When grooming be sure to check your dogs ears, making sure they are clean to prevent ear infections and promote good hygiene.

Teeth should be brushed as frequently as your dog will allow! Ideally, this should be daily and nails should be clipped every six to eight weeks by a groomer or veterinarian.

Clipping is unlikely to be necessary due to the Golden Retriever Lab Mixes short coat.

As these dogs love water, they may enjoy bath time. They are not known to have sensitive skin and so you can bath as often as you would like, using doggie shampoo. 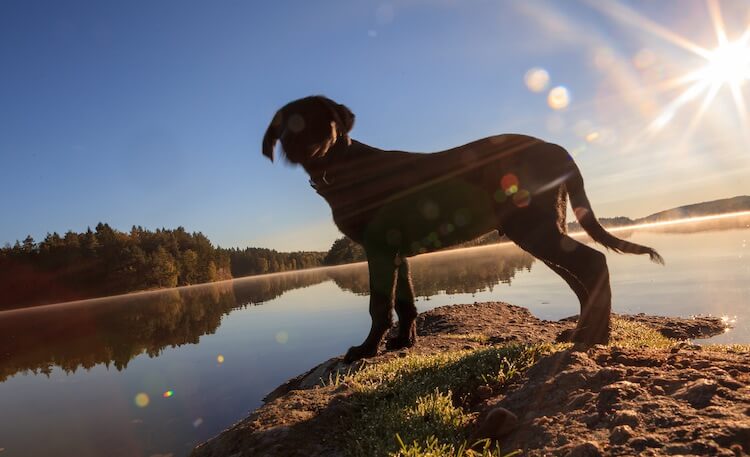 Due to the friendly and affectionate nature of the breed, they are suitable for people from all walks of life.

It is not advisable to keep this dog in a small space like an apartment, especially if you are going to be away from home a lot.

Beyond this, they are very adaptable to their owners, provided they get the right amount of exercise and cuddles.

You may find, that like other Labradors, your dog is extremely food oriented, and will often attempt to charm scraps of food out of your hands or off the table – these delightful dogs will do anything for a tasty reward.

This should be split into two meals to avoid the possibility of gastric torsion developing, as this is common in Labradors.

Dry, wet or raw, it is all just as tasty for this dog breed (generally, they are not noted as fussy eaters).

Labradors are known to have sensitive stomachs; so it is best to try to feed one type of food consistently.

The Golden Retriever Lab Mix is easy enough to exercise.

They will happily lollop along by your side and are not fussy about where you go as long as you’re together.

These active dogs are known to be a little lazy, especially in their old age. Consequently, motivation is key with these dogs, getting them excited will get them up and moving.

Both of the parent breeds enjoy swimming so you may wish to take your dog to a local lake.

It is important to ensure your Labrador Golden Retriever Mix gets enough exercise, both physical and mental. If not, they can become destructive, developing habits such as barking, digging and even chewing on furniture and clothes.

Both the Golden Retriever and the Labrador are known to be very obedient, people pleasing dogs.

These two breeds are highly intelligent and love to learn, resulting in a mix that loves to learn too.

Labradors are very food oriented and so you may find that food-based training works best.

However, Golden Retrievers also enjoy physical contact, such as pats or cuddles.

When starting training, it may be best to play around with different rewards to see what best motivates your dog.

Unlike many other designer crossbreeds, the Golden Retriever Lab Mix is known to be a relatively healthy dog.

However, there is always the potential for them to develop health problems seen in their purebred parent breeds, some of the most common include:

Despite these potential health concerns, the Golden Retriever Lab Mix lifespan is between 10 to 15 years; often living long and healthy lives.

The Golden Retriever Lab Mix is a perfect match for anyone who wants an active family dog.

Renowned for their patience with young children, this dog gets on well with both old and young families.

They are friendly and playful dogs, always up for an adventure, ball game or both!

At their happiest around their family members or receiving any kind of physical affection; belly rubs and ear scratches are a favorite for this dog.

This desire for attention and love of the outdoors can lead to barking and destructive behavior if not met. This means the condition of getting a Golden Retriever Lab Mix is having as much time to dedicate to them as they dedicate to you.

Do you have this glorious dog at home? Leave us a comment about them in the comments below.

If you’re interested in learning about other Lab mixes or Golden Retriever mixes, check out the hybrid dog breeds below.

The Labrabull is an unlikely cross between a Labrador Retriever and an American Pitbull Terrier. You couldn’t imagine a breed whose parents are known for having completely opposite temperaments. Labradors are known for their friendly, affectionate and eager to please nature whereas the Pitbull is Continue Reading →

King Shepherd: 10 Reasons Why This Shepherd Dog Is Unique

Everyone loves a Labrador Retriever! A quintessential family dog, they have become a symbol of kinship in America. This breed thrives in most environments, highly adaptable to each home, and these clever dogs have also found roles as therapy and service pets; although they are Continue Reading →