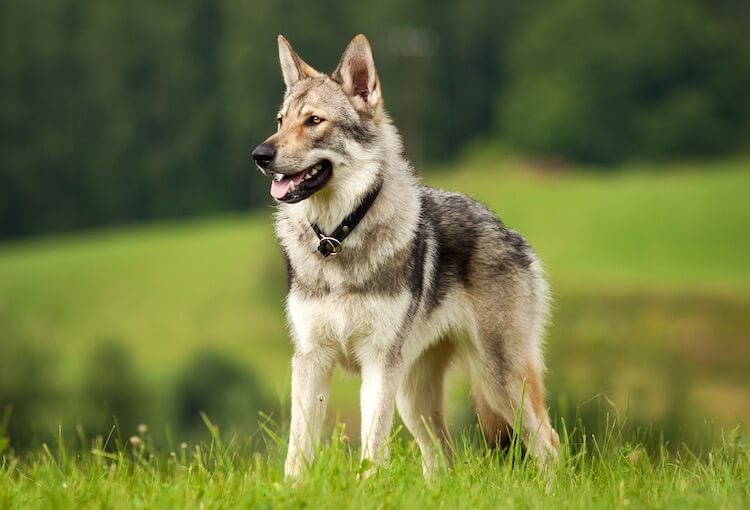 The Czechoslovakian Wolfdog may just be the closest breed of dog to a wolf you can own, that’s right, even more so than the favorite Husky.

Standing at between 24 to 26 inches and weighing 44 to 57 pounds this canine is a tall and powerful breed.

This is a remarkably intelligent Wolfdog who thrives on their owner’s love and devotion.

There are many fascinating traits associated with this magnificent and majestic breed, so keep on reading to learn more about their history, temperament and appearance. 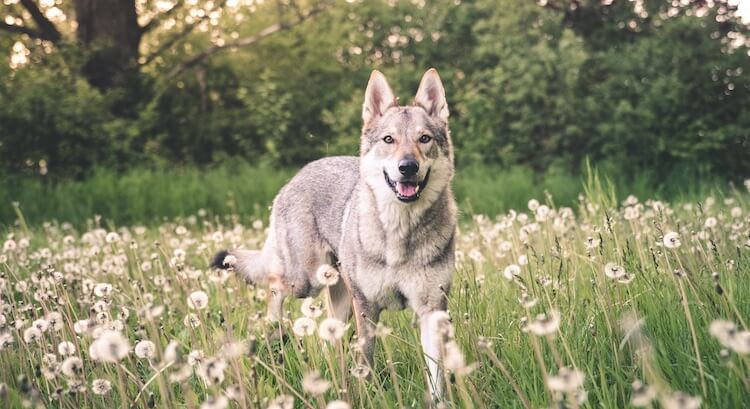 The Czechoslovakian Wolfdog is a working breed. This is evident due to their increased desire to please their owners and their strong stamina and endurance.

In 1955, a biological experiment was conducted in Czechoslovakia with the aim of selectively breeding a new dog.

The goal was for this breed to be protective, intelligent and loyal with the purpose of being used as a military attack dog.

The first Czechoslovakian Wolfdog was bred from a German Shepherd and Carpathian Wolf.

However, it was not until 2011 that the American Kennel Club recognized this dog as an official breed.

Today, this canine is renowned for its wolf-like characteristics as well as the positive attributes of: loyalty, love and attentiveness.

This breed is definitely expected to rise in popularity over the many coming years.

Most Wolfdog puppies are born in winter, this is because their Czechoslovakian Wolfdog mother retains the biological trait of female wolves to only be in heat once every year.

The typical price for a Czechoslovakian Wolfdog puppy ranges between $800 to $1,200 USD.

Their price tag can be dependent on the breeder, bloodline, pedigree and supply (supply might be limited due to this breed only being recognized in the United States 10 years ago).

These puppies are so popular that in 2017, over 200 Wolfdogs were seized in Italy due to suspected wolf exploitation.

This breed has a wonderful temperament if all their exercise and mental stimulation needs are met. If not, then non-desirable behaviors (such as howling) begin to emerge.

Due to their strong wolf heritage, the development of incessant howling may occur.

This is especially true if you leave your Wolfdog home alone for prolonged periods of time.

Remember, this is a breed who thrives off interactive exercise, so simply leaving your puppy to do his own thing in the backyard is not enough.

The Czechoslovakian Wolfdog may be aloof and wary of strangers and therefore they may be quite protective of their family.

They see their owners as “a part of their pack” and find it instinctual to protect them, however, this protective temperament can be reduced through early and regular socialization.

Because they have remained close to their wolf ancestors, the personality of the Czechoslovakian dog is rather unique.

They can be loyal, and loving and they do indeed love to play (however, games must be mentally stimulating or they may bore easily).

This is an extremely confident breed who is not afraid to stand up for themselves.

The Czechoslovakian Wolfdog may show you love and affection through protection. 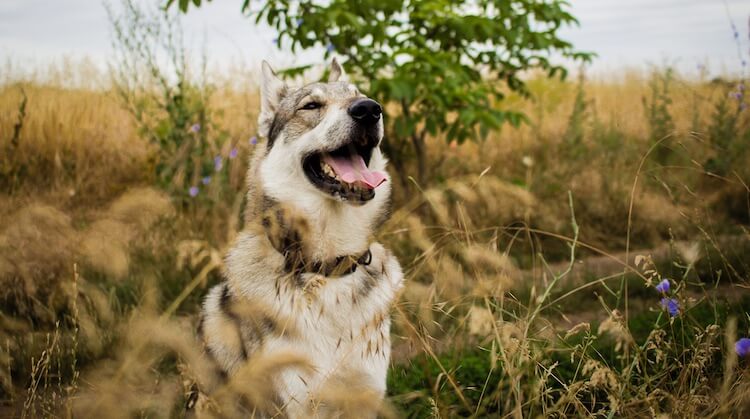 These Wolfdogs are a magnificent breed, however, they do not do well in homes with young children or other pets.

Their high prey instinct may interfere with their ability to successfully interact with other pets (especially smaller animals such as rabbits, hamsters, and cats).

The Czechoslovakian Wolfdog does not usually get along well with small dog breeds. Although, correct socialization from a young age may reduce this characteristic.

Due to their strength, activity levels and alertness, this breed does not do well in homes with children.

Overall, this is a breed who does well with active companionship. However, unlike most dog breeds, despite being loyal, they do not seek human connection.

The facial features of the Czechoslovakian Wolfdog greatly resemble their wolf ancestors; with a strong jaw, amber colored eyes and erect ears.

Their body is rectangular, athletic and agile.

It is clear from their body shape that their stamina and endurance levels are magnificent.

Because of their wolf heritage, their eyes are extraordinary for night vision when compared to other dog breeds.

The Czechoslovakian Wolfdog stands at:

This Wolfdog is classified as a large dog breed and female weigh approximately 44lb whilst males are slightly heavier at 55lb. 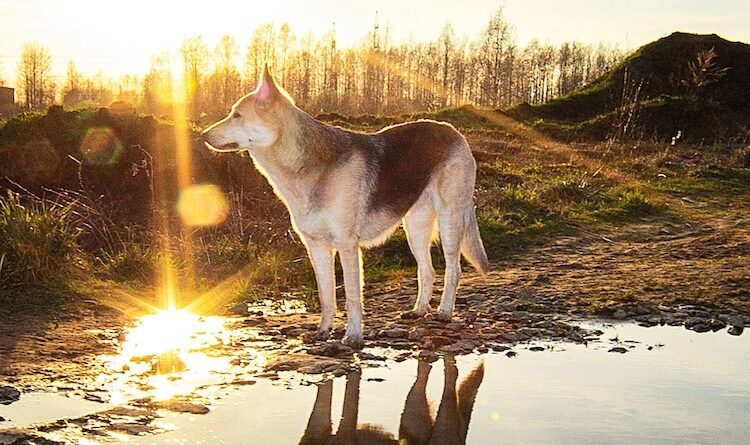 Additionally, this breed may have a light mask (not as dark as a German Shepherd’s mask) and a black muzzle.

The Czechoslovakian Wolfdog’s coat is extremely similar to that of a wolf.

Due to their medium, dense and straight coat, this breed thrives well in cooler climates (as opposed to hotter ones). However, they can adapt fairly easily to their environment.

Just like their German Shepherd ancestors, this breed has a double coat which protects them in different climates.

Because of their double coat, they are excellent working dogs in all sorts of conditions, however, shedding is inevitable.

The excessive shedding does in fact mean that this Wolfdog is not a hypoallergenic breed.

Regular brushing should help maintain their coat. However, this is a relatively clean breed and therefore excessive grooming is not necessary.

We recommend brushing this breed on a monthly basis.

Whilst brushing may be beneficial for your Czechoslovakian Wolfdog, bathing is not needed and may in fact damage your puppy’s fur by stripping it of its natural oils.

Brushing your dog’s teeth is also important as it reduces the prevalence of dental health problems.

Caring For A Czechoslovakian Wolfdog

Because they are the most closely related dog breed to wolves, they are extremely active and alert.

Therefore they have high maintenance needs when it comes to proper training, exercise and mental stimulation.

You get what you give, therefore effort in the maintenance of this breed is well worth the reward.

Due to their wolf-like characteristics, this breed prefers a raw diet.

If you find it difficult to prepare a raw-based diet, they may do well on a high quality kibbled diet which has been formulated for active breeds; just ensure that your puppy is obtaining all the nutrients they require to thrive.

Macronutrients, as well as micronutrients (vitamins and minerals), are both important for your Czechoslovakian Wolfdog gut health.

As this breed is medium to large sized, we recommend only feeding them once a day as adults. This may be in the evening, after a long and well-earnt day.

Power and stamina are two words which adequately describe this dog’s exercise ability.

This Czechoslovakian Wolfdog loves to exercise and will make an excellent running partner (if you can keep up of course)!

Exercise requirements include long walks (as well as runs) with added mental stimulation to keep these puppies on their toes to avoid reckless and boredom behaviors.

Boredom behaviors, such as howling, may manifest if their energy needs are not met.

Because this is a working breed, exercising your Czechoslovakian Wolfdog takes a lot of time and interaction-based exercise is what they thrive on both mentally and physically.

Keen swimmers and hiking companions, there is no exercise based activity which the Czechoslovakian Wolfdog does not love.

Don’t forget to leash train your dog, this will allow them to grow accustomed to sticking by your side during neighborhood strolls. 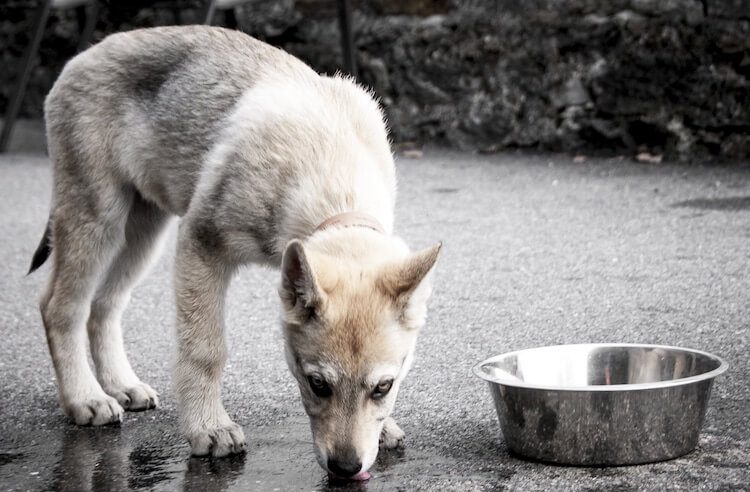 Training your Czechoslovakian Wolfdog may not be the walk in the park you are looking for.

In fact, although this breed is intelligent, and loves to please their owners (due to their working-dog temperament), they may be a little stubborn.

The completion of repetitive activities or “boring” tasks may be hard to achieve if they are not in the mood.

This trait can be combatted through the early intervention of positive reinforcement training.

Positive reinforcement training methods are based on praise and reward, alongside the ignoring of undesired or negative behaviors.

Mental stimulation is essential in this breed. This may be provided through the use of games (such as fetch, and hide-and-go-seek or hide-and-go find the treat).

Hide-and-go find the treat is an excellent game for the Czechoslovakian Wolfdog breed due to their excellent senses: 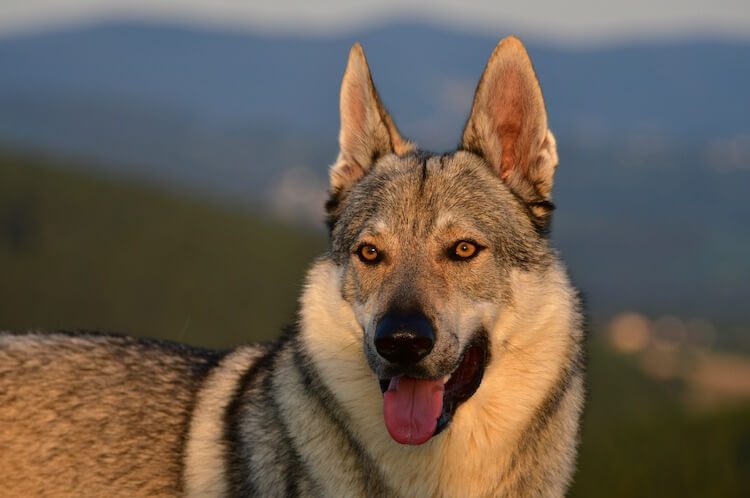 The Czechoslovakian Wolfdog’s lifespan is anywhere from 12 to 16 years of age. Therefore, it is evident that this dog is a healthy breed.

Unfortunately, like many German Shepherd dogs, they may be prone to the development of hip dysplasia due to their heritage.

Hip dysplasia is a musculoskeletal disease characterized by the inability of the hip and joint to form correctly.

Treatment and therapy is required through your local veterinarian.

The Czechoslovakian Wolfdog is a magnificent and majestic breed, which is the closest ancestor to a wolf when compared to any dog breed.

A breed with a fascinating history, devoted soul for their owners, and a keen drive for exercise and mental stimulation; this breed is for experienced owners only.

This Wolfdog not only looks like a wolf, but their wolf ancestral traits remain in their blood, making them an extremely likely to howl and have winter seasons.

What’s your favorite characteristic of this breed? Let us know below!

The Maltese Shih Tzu (also known as a Malshi) is a small, loveable pompom. The perfect companion for the more “relaxed” family member. A designer dog breed, bred by crossing the gorgeous hypoallergenic Maltese with an oh so fluffy Shih Tzu. Not only is the Continue Reading →

The Blue Nose Pitbull is a wonderful family dog. These beautiful dogs may have an intimidating appearance but they have sweet hearts and a loving nature. Their striking blue nose makes them even sweeter. Unfortunately this dog gets a lot of bad press and has Continue Reading →

Best 32 German Shepherd Mixes: A to Z List and Pictures

Golden Retriever vs Labrador: 10 Differences You Should Know