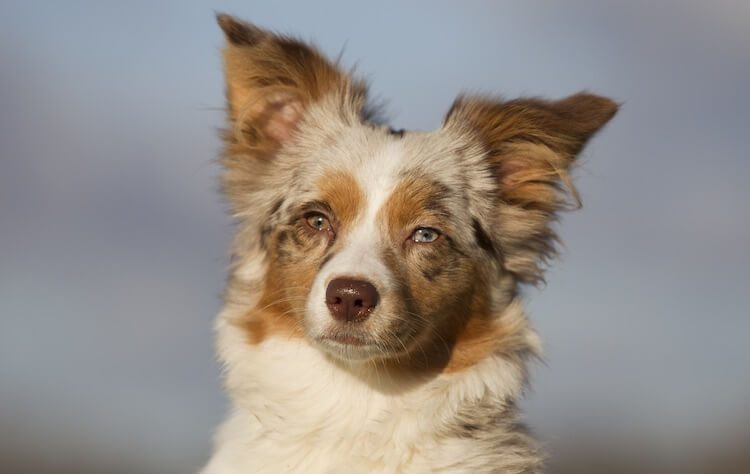 Do you want a high activity farm dog that looks like a puppy forever?

Intelligent, devoted to their owner, friendly and good natured… could this be the perfect furry friend for you?

Despite their almost instant popularity, very little is know about the Miniature Australian Shepherd.

Whether you are a prospective owner, have owned this breed for years, or are just interested in this dog, here are 10 must know facts about the Mini Australian Shepherd.

1. The Mini Australian Shepherd Was First Bred In California

A smaller version of the full grown Australian Shepherd, this active dog was bred to keep the speed, agility and intelligence of the full size breed in a smaller dog breed; this dog was immediately a hit.

First seen in California in the 1960s, these smaller sized Shepherds were bred to compete in Rodeo Circuits.

The Mini Australian Shepherd was first seen in the early 20th century, it is believed that this breed originated in America, despite what their name indicates!

Enthusiasts of the breed worked with vets to produce healthy dogs that were approximately 13 to 14 inches in size.

Through their selective breeding, with the smallest puppies from each litter, they created a healthy population of puppies with little to no inbreeding. Breeding from the entire Aussie gene pool was standard practice in order to keep gene pools diverse.

2. They Are Recognized By The American Rare Breed Association

The Mini Australian Shepherd has been a member of the American Kennel Club since 2011 when they joined the Foundation Stock Service.

They are known as Miniature American Shepherds by the American Kennel Club and became a member of the Miscellaneous Breed Category in June 2012.

Cordovas Spike was the first Mini Australian Shepherd dog to be registered with a kennel club. He was a 15 inch blue merle male, and he was used to create the breed standard for future dogs.

This dog is also recognized by the American Rare Breed Association, however, because two dogs cannot share a name, this dog is sometimes called the North American Shepherd.

The Mini American Shepherd Club of the United States of America was formed in 1990 and since then, they have dedicated themselves to the responsible breeding of this dog.

Shortly after this, in 1996, the Miniature Australian Shepherd Club of America was formed too, dedicating themselves to this miniaturized version of the breed.

Generally considered to be a small to medium sized dog, the Mini Australian Shepherd looks like a full size version just smaller and cuter!

They are known to be athletic, strong and muscular and slightly longer than they are tall.

Often this breed has a bobbed tail, and in some cases their tail may even be docked.

According to their breed standard, a Mini Australian Shepherd size will differ based on gender:

On average, they will weigh between 20 and 30lb.

Acceptable colors for the Miniature Australian Shepherd include:

Tan or white markings are also acceptable with the colors above.

On average, these dogs cost around $800 USD. However, potential owners should be prepared to budget anywhere between $800 to $1,500 USD for a Mini Australian Shepherd puppy.

The higher price is normally indicative of a puppy with pedigree parents.

Miniature Australian Shepherds will have between 2 and 6 puppies in a litter.

This means, in some specific states, there may be too much demand on breeders, which when combined with their high price tag, means there will be unreputable breeders.

So when looking to buy a Mini Australian Shepherd puppy, be sure to find a responsible breeder.

If you are concerned, the American Kennel Club allows breeders to register with them, subjecting themselves to rigorous checks in order to be an approved breeder and only approved breeders can post on the puppy marketplace.

On top of this, it may be worth a trip to the local shelter, as this is a very popular breed.

Originally, the Mini Australian Shepherd was bred to be a working dog for owners with smaller yards.

Nearly 60 years later, this breed is thriving in suburbia. They are a great choice for families as they love to play and you will often find yourselves throwing a ball for hours, unable to say no to those puppy dog eyes!

This youthful energy is a great match for children as their playful natures will result in hours of fun.

Their smaller size means that while they are buzzing with energy, unfortunate accidents due to large clumsy dogs are less likely to occur.

Miniature Australian Shepherd’s friendly and social nature also means that they are a good match with households that may already have dogs or other pets.

If socialized from a young age, these dogs can happily get on with other pets in the household; they are highly adaptable and will eventually grow to love other pets.

6. A Mini Australian Shepherd Won Best in Show at Crufts

The Mini Australian Shepherd is known to thrive in the show ring.

In 2006, an Australian Shepherd won Best in Show at Crufts (the biggest dog show in the UK).

Since then, Aussie Shepherds (and their miniature counterparts) have been thriving in canine competitions all over the world.

A little closer to home, in 2016 an Australian Shepherd from New York won the Masters Agility Championship at the Westminster Dog Show.

These dogs are also known to love other forms of canine sport such as flyball and disc sports. Due to their natural intelligence, they are also natural agility champions.

The Miniature Australian Shepherd is a kind, loyal and social dog.

Due to their heritage, they are very active and are at their happiest while plodding through a field with their best human pal.

Their social nature means they get on well with all people, but, they are known to be somewhat aloof with strangers (this reserved nature can make them an excellent watch dog).

Due to their herding instincts, these dogs will need to be kept in a fenced yard as they tend to run away and attempt to round things up.

These active dogs need between 30 to 60 minutes of exercise per day, with play and brain games on top of this too.

Mini Australian Shepherds devote themselves to their families, and their natural intelligence and enthusiasm makes them excellent for first time owners.

Their natural willingness to please makes them fast learners, meaning they master simple and complex tricks with ease.

8. The Mini Australian Shepherd Lifespan is 12 to 13 Years

On average, Miniature Australian Shepherds live for between 12 to 13 years, but in some cases they have been known to live as old as 15.

This being said, they are prone to several health problems:

9. This Dog Likes To Eat, EVERYTHING!

What do Miniature Australian Shepherds like to eat? In short, everything!

Mini Australian Shepherds do well on a diet of high quality dry food.

Owners should feed between 1 and 2 cups per day to their dog, depending on their dog’s size and activity levels.

Although the Mini Australian Shepherd can eat one meal a day, many prefer two smaller meals of between 0.5 to 1 cup per meal over one big one.

These dogs are known to be like vacuum cleaners (especially in a house with children), if anything goes on the floor, they will gobble it up in a flash!

Therefore, it is important to monitor their food intake, as not only is canine obesity prominent with this breed type, but what they’re eating could be toxic!

10. They Have a BIG Fluffy Double Coat 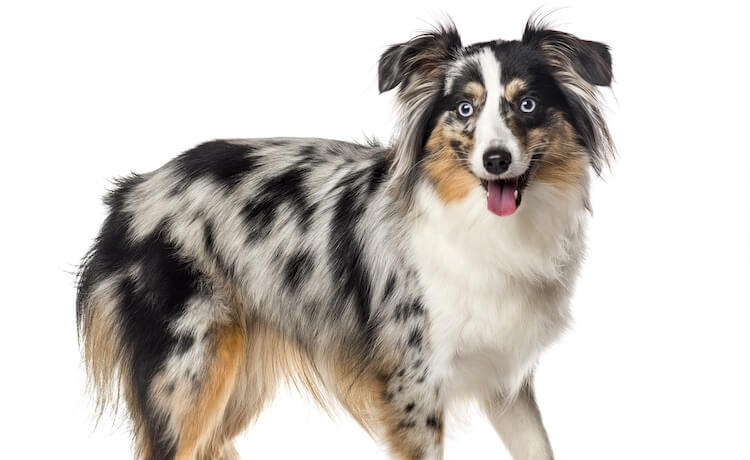 The Mini Australian Shepherd is easily recognizable by his big, fluffy double coat, which believe it or not does not actually require a lot of grooming.

Twice yearly, these dogs will shed their thick undercoats, and during this period, your dog will require brushing daily.

Outside of their seasonal shedding, they require very little grooming, perhaps only once a week.

Females who have not been neutered will shed after their season has finished (if not impregnated).

You should use a slicker brush or mental comb to remove matts or tangles from your dog’s coat.

Similarly, these dogs do not need regular bathing. Bathing unnecessarily will cause skin irritation and even hair loss. Only wash when dirty, using dog shampoo especially designed for sensitive skin.

The Mini Australian Shepherd is all the fun of their standard sized cousins, in a smaller cuter package.

Through careful selective breeding in the 1960s, this breed has retained the kind nature and intelligence of the breed, but is a smaller size making them more manageable in urban environments.

This breed makes an excellent match for an active family and their unrelenting energy means hours of playing ball!

Miniature Australian Shepherds are easy to train and intelligent making them a good first-time dog.

Do you have a Marvelous Mini Aussie Shepherd at home? Are you thinking about getting one? Let us know in the comments below.