With the media attention that Pitbull Breeds get, I’m sure most of us would be pretty confident in identifying this dog immediately.

Would you be surprised to hear that in a study published in the Journal of Applied Animal Welfare Science, a significant amount of shelter workers identified various purebred dog breeds such as the Staffordshire Bull Terrier, American Bulldog and American Bull Terrier as a Pittie?

This terminology, seems to have morphed into a macro-category used as a metaphor to describe dangerous dogs. How could this confusion happen? Let’s delve a little further into this dog.

What is a Pitbull?

They are a type of dog (not a specific breed), which is often used to classify a number of purebred and mixed breed dogs. Within this type of dog there are a number of Pitbull Breeds including:

Historically, the barbaric Brits were fans of these bloodsports known as bear and bull baiting.

They would tie a bull or a bear to a post in a pit and set a dog to attack.

The Brits cross-bred bulldogs for their strength with the feistiness of terriers. The aim was to breed strong, powerful and aggressive dogs. Once these bloodsports were outlawed, they turned to dog fighting as it was easier to conceal as an underground operation.

Types of Pitbulls are still used widely to this day in illegal dog fighting rings.

With their history, these dogs have earned a very bad reputation and are banned in a large number of states and municipalities across the US, largely erasing their history of being known as a nanny dog.

They carry a contagious zest for life which always brightens your day. Had a rubbish day in work? Nothing will beat that smile that welcomes you through the door.

Whilst we have mentioned that they are a type of dog, we need to get specific with regards to purebreds, mixed breeds and hybrids. American Pitbull Terriers are a type of Pitbull too. We will now discuss the various breeds and mixed breeds which fall under this classification to help you understand.

The APBT is a purebred dog, but, due to its checkered past is not recognized by the American Kennel Club.

The APBT stands taller than some of the other Pitbull Breeds, usually around 6-8 inches taller than a Staffordshire Bull Terrier.

Many breeders argue that the only true Pittie dog is the APBT. Most breed specific legislation applies to the APBT and the American Staffordshire Bull Terrier.

Under the APBT, you may notice that some dogs are named either a Rednose or a Bluenose. These aren’t a separate breed, they are just a particular color of the purebred dog.

They still have all the same qualities and characteristics, if anything, because they can be more sought after, over-breeding can result in more prevalent health problems.

You will easily spot a Rednose from birth; they will have red/copper/brown tones to their fur, nose, eyes and toenails.

Often described as a rare breed, you will notice that the price tags for these incredible dogs are on the high side.

Aside from the color, they really are just like all the other APBTs; intelligent, trainable, loyal and gentle.

They suit most families if they have experience of large, powerful dogs. Give them time and patience, for training and socialization and they will give you their whole heart.

Just like the rednose, you can easily spot one of these guys too; the bluenose is just that. They will have blue and grey tones to their fur, eyes, toenails and noses!

Again, as a more sought after color, their price tags can be equally as high as a rednose.

Not boasting anything different to the rest of the Pitties, these fun loving guys just adore their family.

They thrive when they are busy, exercising or playing in the yard.

The downside of the Bluenose is their health. As the blue and grey hues are caused by a recessive gene resulting in low melanin levels, it can cause a range of health problems including a weakened immune system, deafness, cataracts, alopecia and a range of heart problems.

Bear in mind that both the rednose and the bluenose are as a result of breeding bluenoses with bluenoses, and rednoses with rednoses to result in the desired color.

The gene pool for both types could potentially be small which can result in more prevalent health issues.

Widening the gene pool, there are some very popular Pitbull breeds which are a Pitbull Mix (i.e. a cross breed).

A Rottweiler and Pitbull Mix can be result in a hybrid dog which is loyal, loving and affectionate.

We end up with this hybrid dog when we cross-breed a Pittie with a Rottweiler. The result? An incredibly strong and loyal companion known as the Pitweiler.

A muscular dog which some say presents as intimidating couldn’t be further from the truth. When trained and socialized from an early age, you end up with dog yoga by your feet and the biggest smile greeting you.

Whilst it’s impossible to completely predict the temperament from a hybrid dog, both parent dogs have very similar characteristics; loving and confident.

It is worth noting that Rottweiler’s are renowned for sometimes being aloof! You may end up with this quality in your Pitweiler. This can throw a cat amongst the pigeons during training sessions.

For more tips on training your Pitweiler, take a look at our article on the Pitweiler.

Pitsky Dogs are bred by mating a male Pitbull (i.e. sire) with a Husky (i.e. Dam).

We also have another favourite Pitbull Mix; the Pitsky. This is when a Pitbull is mated with a Husky (this can be an Alaskan Husky or a Siberian Husky).

Here, we end up with a playful and affectionate mix of intelligence and cheekiness.

These hybrids are best suited to busy households with an active lifestyle. As with any hybrid, they could retain characteristics from either parent. A bored Husky will dig, chew and howl; they are also master escape artists.

If your Pitsky is more Husky like, you have to take these behaviors into consideration. Whilst not for the feint hearted, they are an affectionate and enthusiastic mix who will certainly keep you on your toes.

To learn more about if the Pitsky is the right dog for you, take a look at our full article and breed analysis.

Which Is The Best Pitbull? 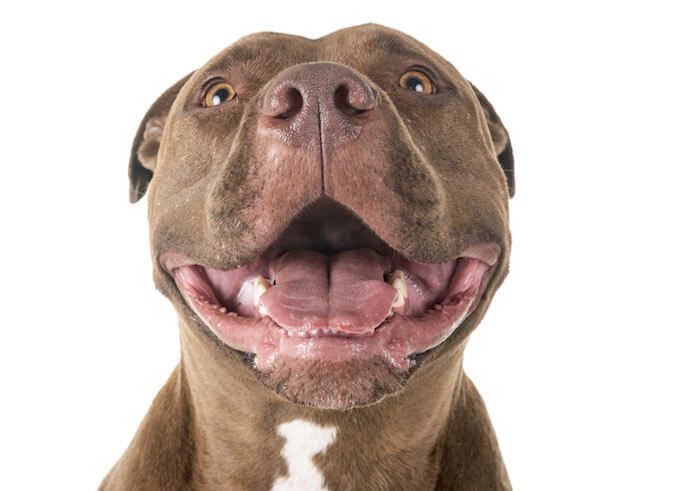 If you have experience of large, powerful dogs and have the time and patience to give, what you receive in return is invaluable.

Pitties are loyal, gentle and wear their heart on their sleeve. A dog which carries a contagious zest for life.

We know they get a have a bad reputation, which may take generations to remove, and face bans or restrictions in multiple US cities. We also know that they are involved in the most dog bite related fatalities compared with any other breed.

But, we also know that when temperament tested by the American Temperament Test Society, Pitties pass 87% of the time.

We’re not breed-ist, but looking at a comparable sample size, the Schnauzer had a pass rate of 77%.

What we will say, with a pure bred Pittie, you’ve got more of a chance of predicting their characteristics and temperament. With a hybrid, you never really know what you’ll end up with. You may end up with more Pittie than Husky, or more Rottie than Pit.

Hopefully, by now, you understand the Pittie is not a specific breed of dog, but, a general classification used to describe lots of different purebred and mix dogs. Most commonly, when discussing Pitbull Breeds, people mean the APBT.

However, there are also other purebred dogs which are types of Pitbulls, such as the Staffordshire Bull Terrier or the American Staffordshire Terrier.

Finally, we can get a Pitbull Mix dog which is normally a APBT mated with another breed of dog (e.g. Pitsky).

Whilst we’ve discussed all of the positive attributes of the faithful Pit, we just ask that you are realistic with your capabilities as a dog handler.

Their high intelligence makes them responsive to training and with early and continued socialization, these guys are loving and playful family dogs. The problem is when they get into the wrong hands; whether this be for totally barbaric reasons, or simply that owners don’t have the time to spend with them.

Time, patience and love are all these guys want; in return they will give you their heart (and steal yours in the process).

Would you rather a purebred, a mix, or none at all?! Let us know with a comment below.

Pomsky: Everything You Should Know About This $5,000 Dog

The Pomsky is a beautiful bundle of mystery and mischief; disguised as a cute little fluffy puppy. A cross between a Pomeranian and Husky, this marvelous crossbreed has been a near-instant hit; making them very popular and famous dogs. Pomskies are charming dogs, often having Continue Reading →