Brindle dog breeds are some of the most visually appealing canines known to man.

Their tiger striped coat is an iconic color caused by a rare gene.

This pattern is often seen as dark stripes on a brown or tan coat. However, there is also a reverse brindling pattern whereby lighter brown stripes sit on a black or dark brown coat.

Brindling can take up the whole of the coat, but it can also be seen in specific patches, most commonly on the back of the dog.

The pattern is also not always distinct, sometimes the two colors are very close in pigment.

Interested? Read on to discover nine brindle breeds that you may want to consider for your next pet. 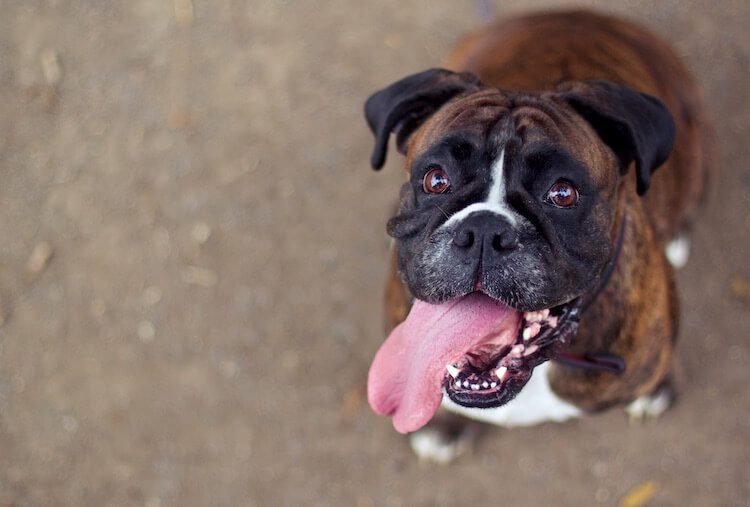 Perhaps one of the icon brindle dog breeds, this coloring is very common in Boxer dogs.

In fact, brindle is one of two colors recognized by the American Kennel Club for the Boxer.

Boxers, as a breed type are known to be intelligent and very energetic.

Their high energy personalities (combined with their silly disposition) make them great pets for any single, couple or family, looking for an in-your-face dog breed.

This breed did not get the memo that they weigh 55 to 70lb, yet they truly believe they are lapdogs and will spend any time you are seated trying to climb into your lap.

However, while Boxers are generally happy dogs, living long lives, potential owners should be aware of the potential health risks.

Boxers, as a breed type are genetically predisposed to heart conditions such as Arrhythmogenic Right Ventricular Cardiomyopathy, more commonly known as “Boxer Cardiomyopathy” due to its prevalence in the breed.

There is also evidence of cancer within the breed, with an estimated 38.5% of deaths being cancer related.

Do not let their potential for health issues put you off, Boxers are typically healthy, happy, loving dogs that dote on their families.

This intelligent breed would be a good match for any experienced owners looking for their next pet. 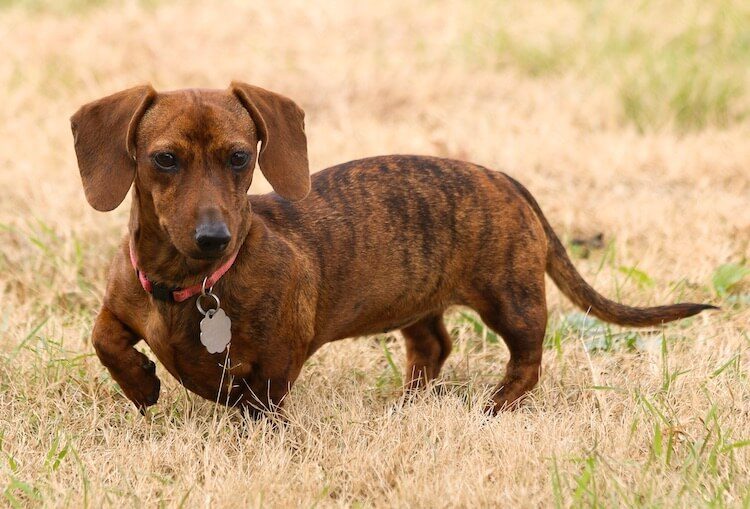 Unlike the Boxer, brindle is very uncommon for a Dachshund dog, despite this, the brindle pattern is accepted and recognized by the breed standard.

Unsurprisingly, the popularity of brindle dachshunds is slowly increasing as dogs such as Barney show the world just how cute and fun brindle dogs can be.

As a breed, Dachshunds tend to be noted for their tenacity and sassy nature.

These little dogs will often tell you what they want with a few well-placed barks and will continue to bark if they don’t get what they want.

Owners of this breed tend to laugh at their silly and mischievous nature.

Dachshunds are naturally curious, exploratory and territorial, unaware they are not intimidating at 8 to 11 inches tall!

After a good explore of the environment, they love to retire into your lap for kisses and cuddles. Naturally affectionate, this breed is totally devoted to their owner or owners.

This intelligent brindle breed excels at obedience and trick training. However, you may have a job convincing your canine to play ball, they can be somewhat stubborn.

They respond very well to positive reinforcement and consequently lots of rewards are necessary to have a motivated pooch. 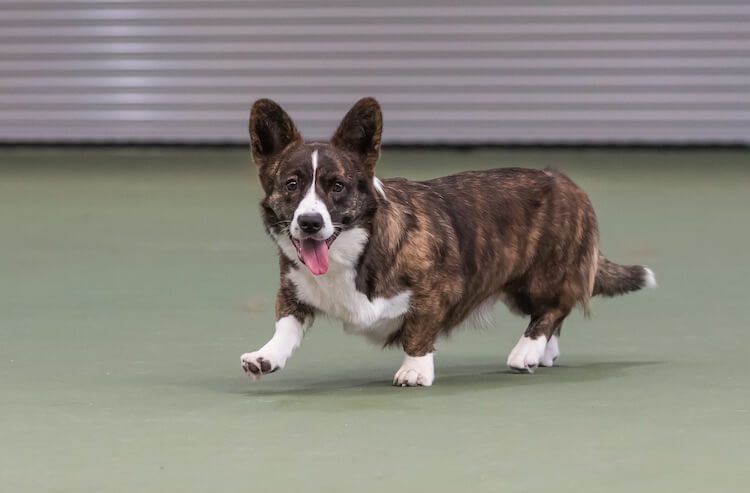 The lesser known of the two Corgi breeds, the Cardigan Welsh Corgi is a devoted pet.

Naturally intelligent and sporty, these dogs would be a great match for anyone looking for a pet they could compete at canine sports such as agility, obedience or even sheepdog trials.

Interestingly, this pooch was originally bred to herd cattle.

Dogs that were shorter didn’t get kicked by the cattle they were herding, consequently farmers began to develop low set smaller dogs; and the Corgi was born.

As well as needing lots of exercise (between 30 and 45 minutes every day), this dog will need an intense grooming routine.

Thick brindle double coats are relatively high shedding, and as a result will need grooming every few days.

Grooming serves many purposes, it acts as way for owners to bond with their dog, but most importantly for this brindle dog; it removes loose hair and matted hair the coat. 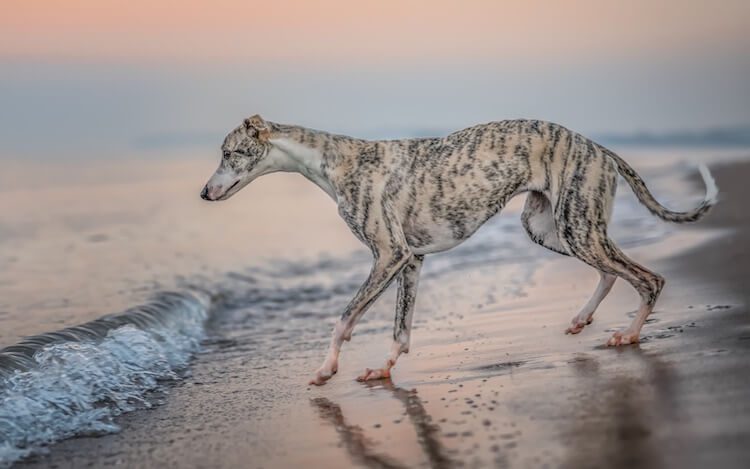 Whippets are another brindle dog where this pattern color is frequently seen.

As a breed, Whippets are very people oriented, enjoying spending time with their owners and meeting new people.

Generally speaking, this canine is not a huge fan of being housed with smaller pets, instead he prefers to live in a household where he is the only pet.

Whippets are known to be good with children as they make an excellent playmate; their silly personalities can entertain young children for hours.

However, as with all dogs, play should always be supervised to avoid potential injury to both child and dog.

This breed is nicknamed a “heat seeking missile”, due to their tendency to love all things warm.

Although traditionally used as a rabbit luring dogs, this speedy breed has very little stamina.

On average, these guys need only 30 minute walks each day, after which they will more than likely curl up on your couch and sleep out the rest of the day. 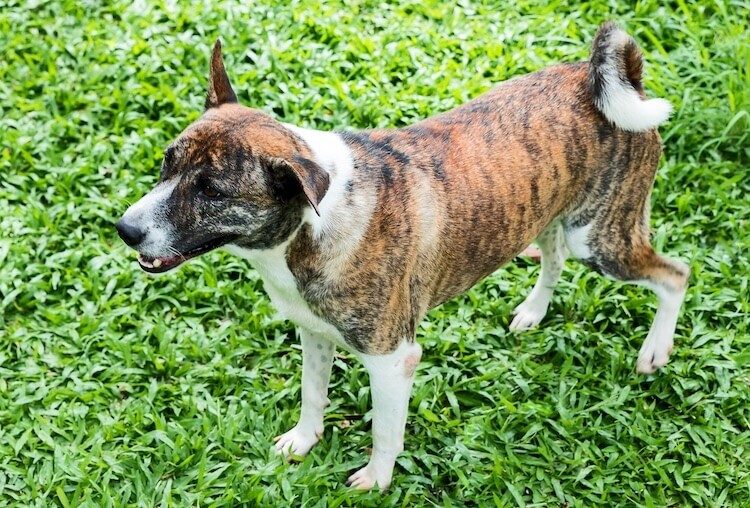 A rare and ancient dog breed, the Akita is a brindle dog in which we see both the brindle and reverse brindle pattern.

Japanese in origin, this dog was originally bred to hunt boar and bears.

It therefore stands to reason that this is a brave and strong canine; loyal and affectionate to their family.

There are two different bloodlines of Akita:

Since Helen Keller brought the Akita to the United States in 1937, they have been an instant success.

Known for their powerful and aloof nature, this is not a breed for first time owners.

Their spontaneous and occasionally overbearing nature may tend to catch out those who are not used to the breed.

Akitas tend to like to live in households where they are the only dog, especially of their sex. Male/female combinations may be okay, however this breed likes to be the only pet in the home. 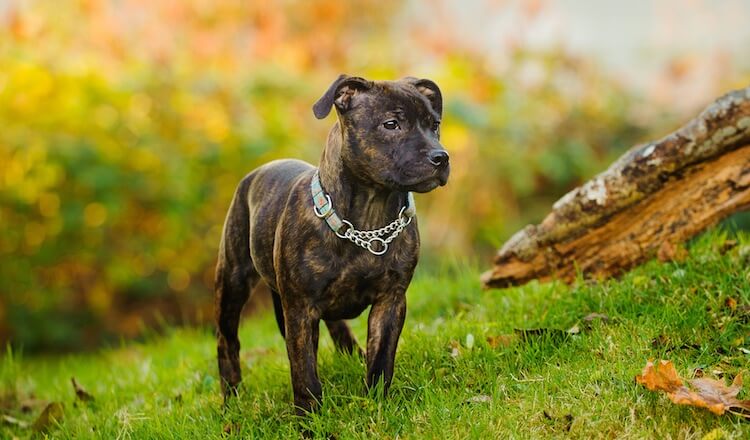 Despite their controversial and bloody history, Staffordshire Bull Terriers (or Staffie for short) are known for their loving and affectionate nature.

In fact, contrary to popular belief, this brindle dog is recommended by the Kennel Club for families looking for a pet .

These dogs can come in many colors:

While these canines were originally bred for vermin control and blood sports, it is now much more common to find them as pets.

They are known for their gentle natures, generally speaking, they like to spend their days eating, sleeping and playing (in that order)!

Like most dogs, Staffies have pretty good stamina and need around an hour of exercise each day. Consequently, they do very well as a family pet, as all members of the family can pitch in and help out with walking the dog.

They also love to play, tug games are usually their favorite, which can contribute to both physical and mental stimulation. 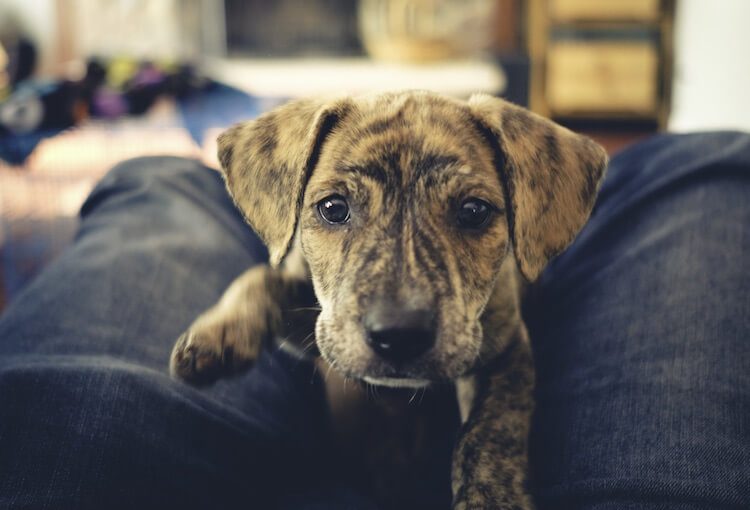 This breed isn’t a dog you encounter every day, and yet the Mountain Cur is famous for its brindle coat.

In fact, this breed is most commonly seen in the brindle pattern!

First seen in the midwest during the pioneer movement, this dog is known for its courageous and loyal nature.

Interestingly, the cur almost went extinct in the 1940s during the movement towards industrialism. However, with a return to traditionalism being seen in the United States, Cur’s are now on the rise again.

Due to their rarity, Mountain Cur’s are not cheap; on average, these puppies will cost between $300 and $3,000 USD.

This can be due to the show quality of the parents and Mountain Cur’s often compete in canine sports such as flyball or herding, which drives up the price of their puppies!

Their protective temperament comes from their origin as a farm dog, to this day this dog loves to work and cannot tolerate boredom.

Beyond this, due to strict breeding guidelines, this brindle dog has a very healthy composition with dogs often living to be 16 years old. 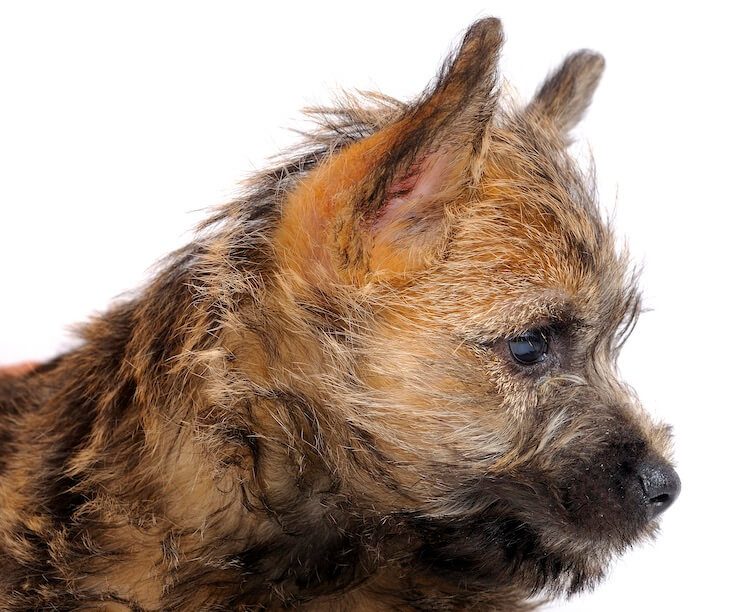 Made iconic by Toto in the Wizard of Oz, Cairn Terriers are a unique brindle dog.

Not only is their coat water resistant, but it changes color as they age!

Dogs that are brindle as a puppy will often become black, brown or silver as they mature.

It is widely believed that the Cairn Terrier is one of the oldest terriers in the world.

This breed originated on the Isle of Skye in Scotland, originally called the Skye Terrier. However, about 100 years ago selective breeding created two separate lines:

One thing to note about the Cairn Terrier is that they are often hypoallergenic, meaning they are suitable for allergy sufferers.

Like other terriers, this canine loves to bark and chase vermin like rats and mice; consequently, this dog may enjoy chase type games with scent balls.

In terms of temperament, Cairn Terriers are feisty, funny and loyal.

They are very active, loving to play, run, walk and just generally be outside. They prefer homes with constant garden access, but they are very adaptable and can thrive in most environments.

This breed is known for their intelligence and athleticism, as well as highly adaptable nature.

Although it is uncommon in the Shepherd family, it is not unusual to see the Dutch Shepherd with a brindle coat.

This breed originated, like many other shepherd breeds, as a farm dog, but is now commonly found in a military or police role.

Dutch Shepherds excel in this position due to their natural problem-solving ability and trainability.

With the correct training, the Dutch Shepherd can make an excellent guard dog.

However, on the flip side, this breed also makes an excellent family dog and playmate. This highly adaptable pooch is naturally flexible, making them a great match for those who love versatile, athletic breeds.

As you can see, brindle breeds come in all shapes and sizes, from the mighty Dachshund to the massive Dutch Shepherd.

Each brindle dog comes with its own pros and cons, but there truly is a canine for everyone!

If you have children at home, you may prefer breeds such as the Staffordshire Bull Terrier, Dutch Shepherd or the Cardigan Welsh Corgi.

Those who live in adult only homes may prefer dogs such as the Akita, Whippet or Dachshund.

Do you have a brindle pooch at home or are you thinking about getting one? Leave us a comment below letting us know.

Commonly mistaken for a hand-bag dog, or even a teddy bear, there is more to the Toy Poodle than first meets the eye. An elegant appearance, with a well-proportioned body, and small curly locks, they are identical to the Standard Poodle with the exception of Continue Reading →

With a steady increase in popularity of Husky dogs, it is no surprise that hundreds of dogs have bred with this loyal and energetic breed. From purebred Pitbull Terriers and Welsh Corgis, to German Shepherds and Golden Retrievers they have all mated with a Husky Continue Reading →