The Rhodesian Ridgeback is a large dog breed who carries a rather unique and famous history due to their involvement with one of the world’s largest cats, the lion.

There is also more than meets the eye when it comes to their equally famous Ridgeback appearance and how this is selectively bred for.

Ridgebacks are rapidly becoming more and more appealing as family companions across the USA. So we decided to gather up ten of our favorite facts about the breed so their growing fanbase can be better informed on this large and not-so-scary dog! 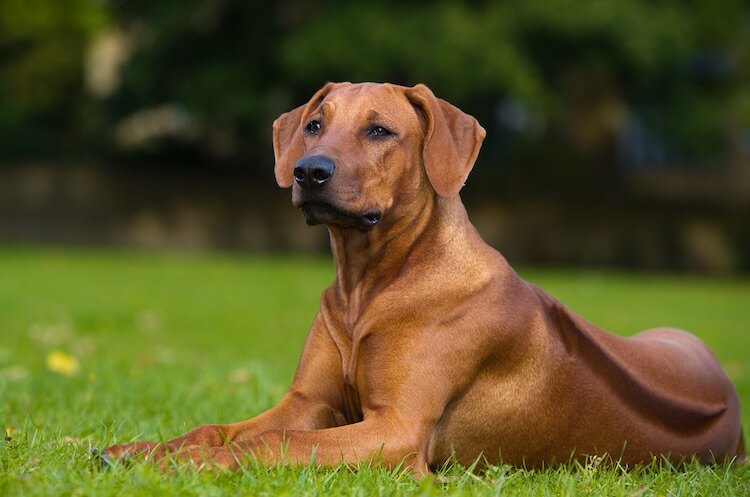 However, their name change led many to questioning why they were known as “lion dogs” in the 20th century?

It is a misconception by many that the Rhodesian Ridgeback had a role in the hunting and killing of lions.

This was due to their role as hunting dogs. Boers needed to find a canine companion who was capable of hunting larger game. The reason why they were initially bred by Boer hunters was the job of keeping lions at bay for hunters.

These dogs would surround the lions and guard them until the hunters arrived. They were also useful for protecting hunters against lions.

Their alert, intelligent, confident and large size aided in this breeds’ ability to act in stressful situations where smaller or more docile dogs would not be suitable.

Today, times have now changed, the Rhodesian Ridgeback is now generally bred as a loyal companion. Their affection, loyalty, confidence, and intelligence definitely make great as a family pet.

9. He Was First Bred In Southern Rhodesia

The Rhodesian Ridgeback originated in South Africa. In fact, they were originally bred in an area known as “Southern Rhodesia” – now called Zimbabwe.

Despite originating from Southern Africa, the Rhodesian Ridgeback is now out-populated by many other non-native breeds (e.g. Miniature Schnauzer and Rottweiler) in Southern Africa – this is a common occurrence throughout the world with many native dogs.

It is well accepted that in the 18th century, Europeans arrived to South Africa and began trading with the Khoikhoi people of Africa. The Europeans began to admire the loyalty, confidence and guardianship of the Khoikhoi dog breed.

Very quickly, the Europeans began to breed their own dogs with the Khoikhoi dog breed; this led to the creation of the Rhodesian Ridgeback’s ancestors.

It is hard to pinpoint which breeds were first bred to create the Ridgeback. However, it is known that the Khoikhoi dog, Greyhounds, Bulldogs, Terriers and even Great Danes were used.

Six Rhodesian Ridgebacks were first brought to the United States in the 1950s by the O’Briens in the hopes of introducing this dog to America through the American Kennel Club.

This was successful and in 1955 the breed was officially recognized by the American Kennel Club.

8. The Rhodesian Ridgeback Is A Sight Hound 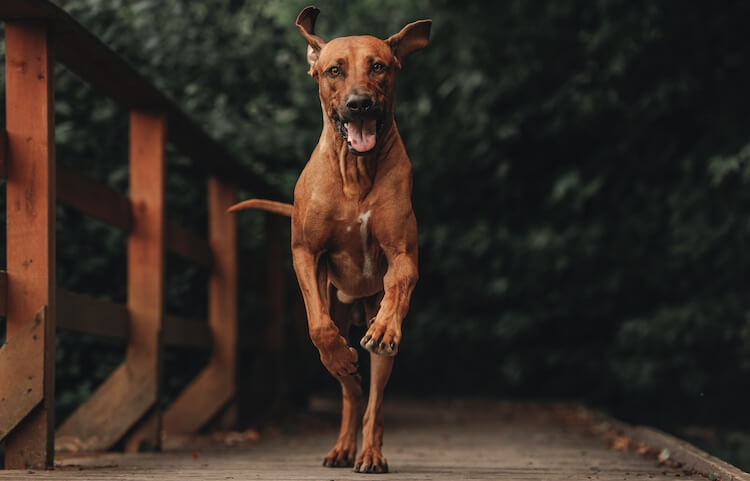 Classified as a hound by the American Kennel Club, the Rhodesian Ridgeback is a sight hound. The United Kennel Club also classifies this breed as a “sight hound”. However, this was not always the case.

Until the 1950s, the Ridgeback was classified as being a part of the “gun dog” breeds. Their official classification was updated in the 1960s from a “gun dog” to a “hound”.

A gun dog is defined as canine-members who help hunters track down and retrieve small game. Famous gun dogs, which are widely recognized worldwide, include: Labrador Retrievers, Golden Retrievers and Cocker Spaniels.

To call a Rhodesian Ridgeback a gun dog is incorrect by our current standards.

This dog does not perform the duties of a gun-dog. Their role is to simply keep a lion at bay until the hunter arrives. Therefore, many kennel clubs re-categorized them as “sight hounds” or sometimes “scenthounds”.

7. He Has Three Accepted Coat Colors

This dog should have a short, glossy and well-maintained coat. When maintained correctly, their coat is very dense which aids in the protection of their skin during hunts.

The accepted coat colors for the Rhodesian Ridgeback is limited to three different shades of wheaten:

The Rhodesian Ridgeback used to come in a variety of colors such as sable and brindle. The original breed standard allowed for an acceptance for a greater variety of coat color appearance. However, the most recent standard limited the coat color to only shades of wheaten.

Rhodesian Ridgebacks may also come in two different nose colors: black or brown. They are also known to have black tongues (just like Chow Chows).

Another interesting aspect of this dog’s appearance is the acceptance of colored markings.

6. His Ridgeback Is Essential For Shows/Competitions 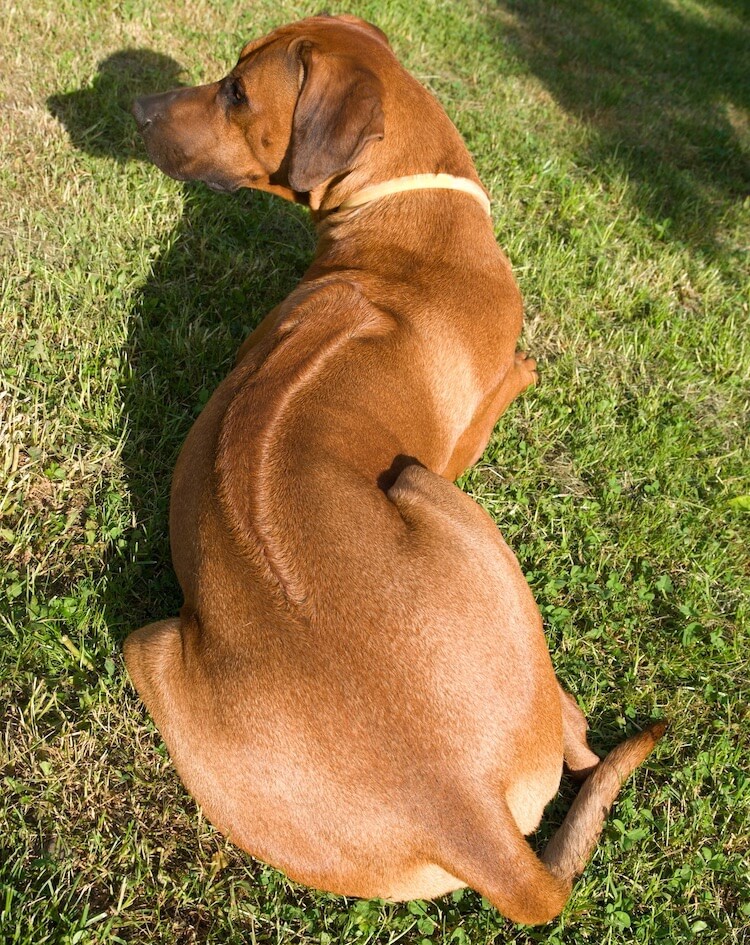 The American Kennel Club sees ridgelessness as a severe fault in this breed (i.e. a reason for disqualification) making their ridgeback appearance an essential part of this breeds’ standard. Following on, many kennel clubs around the world also recognized ridgelessness in the breed as a fault.

However, due to their increase in the questioning of the breeder’s ethical practices. Culling healthy but ridgeless puppies was deemed unacceptable.

The culling of ridgeless puppies is not accepted as a method of controlling cosmetic faults within the breed anymore. Recently, methods of spaying or neutering the puppies is used instead.

5. The Ridgeback Appearance Is Due To Autosomal Dominant Genes 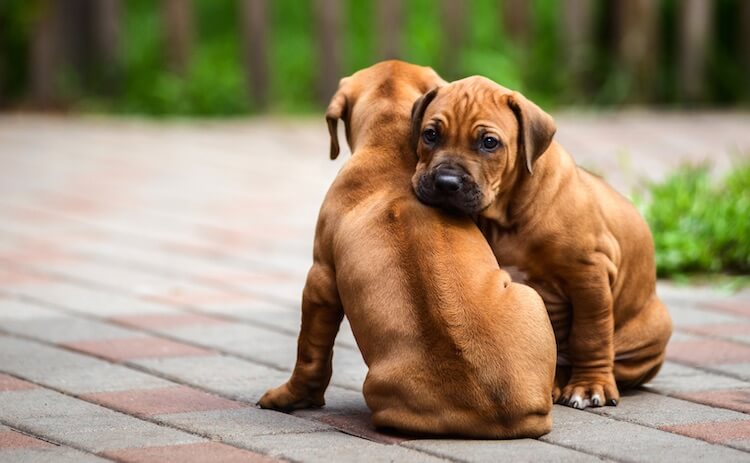 The famous ridgeback is best described as a long strip of fur which follows their spine. Fur in this distinct pattern grows in the opposite direction to the rest of their coat and therefore creates the ridge.

As with many other distinct appearances, their “ridgeback” was found to be due to specific genotypes. It has been suggested that the ridgeback trait is due to autosomal dominant genes.

A canine with one or two ridge-mutated genes will have a ridge.

However, when a dog has two copies of the ridge allele, they have a greater risk of developing neural tube defects (such as Dermoid Sinus). This is problematic for dog breeders when considering the demand for a “ridge” characteristic and that ridgeless puppies are less desirable.

Other breeds who carry that similar trait include Thai Ridgeback, and the Phu Quoc Ridgeback are both predisposed to neural tube defects if they carry two mutated copies.

Despite a popular misconception, Rhodesian Ridgeback owners know that this breed isn’t aggressive. In fact, they are very sensitive. It is this quality that makes them a great companion for dog lovers wiling to devote their time and effort to this beautiful dog.

Unfortunately, many mistake the breed’s “aloofness” towards strangers with aggression. Their intimidating appearance may be further criticized due to their large size too:

With correct socialization practices from a young age, aggression should never be a dominant trait in the Rhodesian Ridgeback. Socialization will help you promote positive experiences to help this dog adjust from their role as a hunting and guardian, to curling up next to your side.

Due to their large size and playful demeanor, they may accidentally knock over young children during play time. Therefore, we do not recommend this breed for families with young children and supervision is recommended.

Additionally, they also have a strong prey drive due to their hunting instincts. They are not usually recommended near smaller companion animals such as cats or rabbits. However, with continued and proper socialization and care, unity between fur-ends can exist – they actually get along well with cats in their own household.

3. He Is Strong-willed and Stubborn

The Rhodesian Ridgeback is known to be a strong-willed and stubborn dog. They can be quite mischievous as puppies and are known to try and “bend the rules” more often than not. This can make training a little bit hard. However, with consistent and correct training, this breed is still very obedient.

They are an intelligent dog breed, however, this doesn’t mean that they are great pleasers. Therefore, we recommend this breed for experienced owners only. Consistent and on-going training is essential for a Rhodesian Ridgeback.

Positivity goes a long way in dog training, no matter how difficult the breed may be. This is especially true in the mischievous Rhodesian Ridgeback. In fact, Francis R. Barnes (the man who created the first breed standard) recognized the need for kindness and trust with this dog.

He wrote: “rough treatment…should never be administered to these dogs… they go to pieces with handling of that kind”.

Positive reinforcement methods are therefore the best training technique to help teach your Rhodesian Ridgeback. Stick to treats, toys and praise only.

This is a confident dog breed, and they are not afraid to protect their owners if they think it necessary. Therefore, emphasizing the need for an experienced owner who can teach this dog with consistent and correct training and socialization.

2. Many Suffer From Thyroid-related Health Issues

With lots of care and love, the Rhodesian Ridgeback has a life expectancy of between 10 to 12 years. This is actually quite old for a breed of their size!

Unfortunately, as with many purebred dogs, the Rhodesian Ridgeback is prone to inheriting some specific health issues. They are among the top breeds to suffer from thyroid-related health issues, coming in at number 12 according to the Orthopedic Foundation for Animals.

Hypothyroidism is one of the most common health conditions found in this dog. Defined as an underactivity of the thyroid gland, it leads to a lowered production and release of thyroid hormones. Symptoms can include weakness, weight gain, fur loss, skin infections, and inactivity.

If you see a notable change in your pet’s behavior, then it is advised to call your local veterinarian right away.

The treatment of hypothyroidism is on-going and usually lasts their lifetime. However, the quality of life for your puppy should not be affected so long as the right course of medical actions are taken right away.

A strong muscular breed requires a lot of daily exercise to keep them stimulated! This is especially true when they are young pups, they love to play and are very active (another reason why they require a lot of time and attention from their owners).

We recommend providing the Rhodesian Ridgeback with one to two hours of exercise per day.

This is a breed that is suited to a home with a large backyard that is fenced and allows them to run around and play freely throughout the day.

Physical exercise isn’t the only kind of exercise this breed needs. Mentally exercising your canine is just as important as getting them out running. This helps to reduce negative behaviors such as excessive howling, barking, and chewing.

Mental stimulation can be provided to your Rhodesian Ridgeback in a number of ways:

Due to both their high physical and mental requirements, the Rhodesian Ridgeback is not an appropriate breed for busy or inactive individuals. They will struggle to find the stimulation which they instinctually crave.

With the right ownership, socialization and training practices, there is no reason why this breed can’t integrate well into a family lifestyle full of comfort and affection.