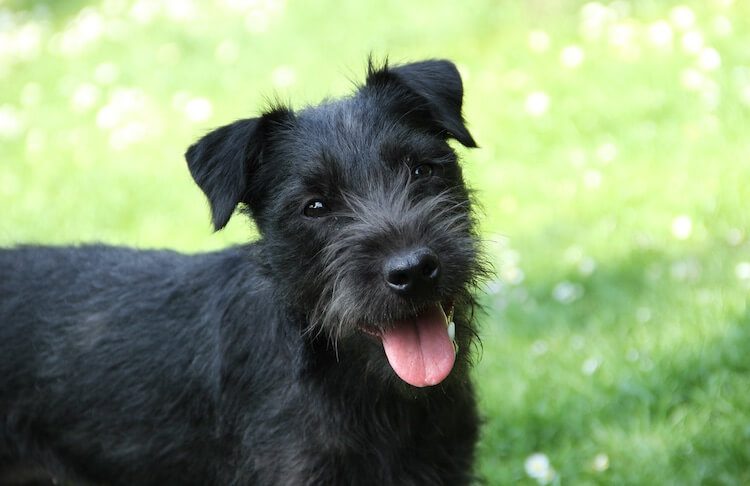 The Patterdale Terrier was traditionally bred to chase small prey, but now these hunting companions are more commonly used as companion pets.

Due to their history, this intelligent breed has a fascinating capability of being able to compress their chest so they can lie very flat and squeeze into small gaps in the pursuit of prey.

This remarkable little dog is a small breed with a big personality.

They are usually best suited to more experienced owners, who are familiar with training stubborn dogs, as their intelligence can also make them very strong willed.

Smart, loyal and very energetic, this breed requires a human companion who loves exploring the outdoors.

There is a lot to know about this interesting little dog – read more to see if you could be suited to his way of life. 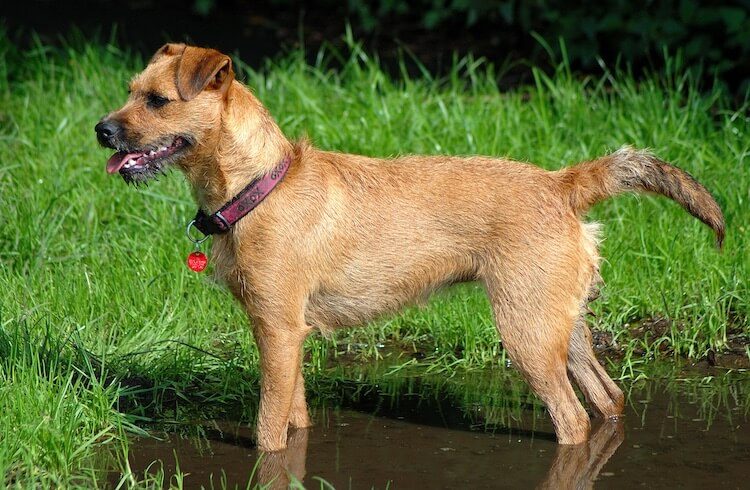 This is a tough little dog breed who was bred to be “as hard as nails”.

Fast and scrappy, the Patterdale was bred to protect livestock (mainly sheep) which involved chasing away predators which may harm the sheep:

As they were bred for a very specific purpose, this furry friend has a very strong prey drive.

Because of this, they are predominantly bred as a determined hunting companion, although some can also be seen fitting in perfectly well as a companion pet.

Patterdale Terriers originate from the Lake District in Northern England.

This hilly and rocky area is regarded as a harsh environment and so a ‘tough’ Terrier breed was needed to guard the livestock of that region.

As a result, this working dog was bred to suit this niche line of work, chasing large and small prey such as foxes away from grazing sheep.

A hardy and robust dog was needed to be able to cope with the harsh climate, terrain and a variety of predators which may resist running off.

Although it is hard to pinpoint exactly when they came to America, it can be estimated that it was around the 1960s – a period when the popularity of the Patterdale started to boom.

This breed is not recognized by the Kennel Club, nor the American Kennel Club as a purebred dog in their own right.

However, they have been registered with the The United Kennel Club since 1995 and are recognized by the American Rare Breed Association (despite the fact they aren’t very rare due to their large following)!

The Patterdale Terrier Club of America is the official breed club in the US.

This club provides lots of advice if you are looking for a Patterdale Terrier rescue and are affiliated with adoption centers across the US. 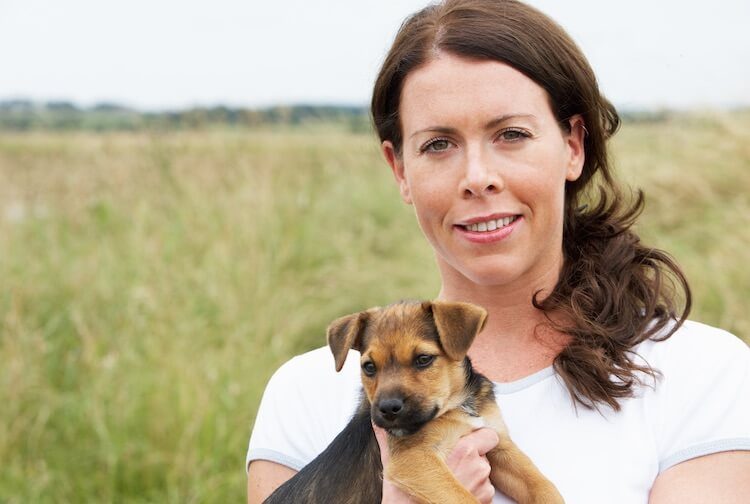 The average size of a litter for this breed is between 2-5 puppies, though some larger Patterdale mothers may produce one or two more per litter.

A Patterdale puppy will cost between $500-$700 USD and are ready to go to their new homes at around 8 weeks of age.

They will usually reach their full adult size at around 10 months of age and be fully mature at around 14-16 months.

A Patterdale Terrier full grown should weigh between 11-13 pounds.

While Patterdales are considered to be less ‘yappy’ than their Terrier counterparts, when they do bark – you will hear it.

They have a big set of lungs for a small dog and so strict training at a young age will need to be implemented to nip any needy barking in the bud before it is allowed to become a problem.

A Patterdale’s prey drive is very strong, so leash walks are preferable and well secured gardens are a must.

While normally a gentle dog breed around humans and other dogs, some guarding behavior can occur.

Thorough socialization during puppyhood, and appropriate training should be sufficient in combating such issues from a young age.

Patterdale Terrier dogs are very confident, but they are very good at distinguishing between threatening and non-threatening situations.

Example – If they saw a fox or a cat in the neighborhood, and had the opportunity to chase it, they would mostly likely be running all night long.

This confidence can also mean they are strong-willed, and even a little stubborn, which can make training quite a challenge.

The Patterdale Terrier is an energetic little dog, who is sweet-natured and affectionate with their owner.

They are also intelligent and can easily become bored and destructive without appropriate mental stimulation.

Terriers can be very playful as they have a lot of energy to burn and their keen sense of smell and motivation to chase can make them a big lover of the game ‘fetch’!

As this dog was mainly bred for hunting (including chasing small prey), which when combined with their love for digging, any prospective owner will need to ensure they have a very well secured garden!

The digging behavior may also be transferred to sofas/beds/furniture within the house, so this should be trained out from an early age by offering alternative behaviors.

Separation anxiety is likely to exacerbate this behavior so appropriate mental stimulation should always be provided when leaving a them alone for longer periods of time to reduce stress, boredom and frustration.

Patterdales are known to be sweet-natured and loyal to humans; owners and strangers alike.

Guarding may occur but is highly unlikely if the dog has been well socialized from a young age.

In terms of other animals, they are known to get on quite well with livestock including poultry, although other pets within the family may not be quite so lucky.

If they have grown up in a house which already has cats and other small family pets, then they are likely to be tolerant of their existence. However, unfamiliar cats and pets in the neighborhood are probably at a higher risk of being chased.

As always, dogs should be supervised when around younger children, and in the case of this breed, they can be quite boisterous when playing due to their high energy levels.

They are more suited to a household with older children who are more confident with dogs and who won’t easily become scared but are willing to play interactive games such and fetch and chase.

Generally speaking, when appropriately trained and socialized, the Patterdale Terrier is a playful and loving dog who just isn’t a massive fans of cats. 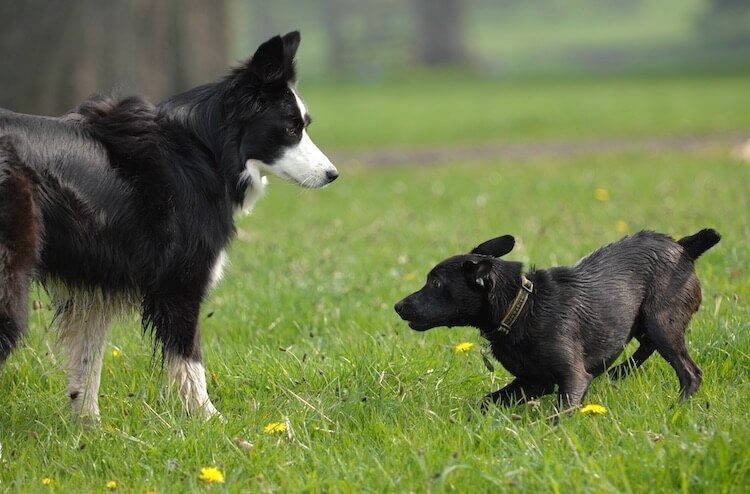 The Patterdale Terrier is a small breed dog, ranging from between 11 to 13lb once fully grown. There are some instances of where this breed has reached weights of up to 30lb (due to the large variation within the breed).

They are also around 10-16 inches to the withers for both males and females.

A ‘tough and sturdy’ little Terrier according to their breed standard, the Patterdale Terrier is a compact muscular dog which can squeeze into the smallest of spaces.

They have a wedge-shaped head, with a strong and powerful jaw and moderate-size floppy ears which are triangular in shape and forward-facing.

Health Terriers should have a level back with a medium-length straight tail.

Patterdale Terrier dogs can be any of the following colors:

Some of these Terriers are a solid color all over, or they can exhibit some white markings on their chest and feet.

Their coat can either be smooth or wirey, but either way it is usually thick to help combat the harsh outdoor weather conditions they hunt in:

Whichever coat they have, this dog will have a dense undercoat to help maintain body temperature.

Patterdale Terriers, with a Wirey coat, will have eyebrows, a beard and a moustache and have a low shedding frequency.

Specific grooming requirements will depend on the coat type your Patterdale Terrier has (this can be confirmed by a groomer).

Brushing should occur at least once a week with a rubber mitt for more smooth coated dogs and potentially a slicker brush for shedding season to help remove the loose undercoat from their thick double coat.

Hand stripping will also be required around twice a year by a professional groomer which will make the brushing regime a lot easier to manage.

Nail clipping, when their nails become too long, will prevent any pain.

Teeth cleaning is an option to help reduce tartar and minimize the risk of gum disease. Alternatively, if your dog cannot get used to the idea, then abrasive chews or daily dental chews alongside a kibble diet should be adequate. 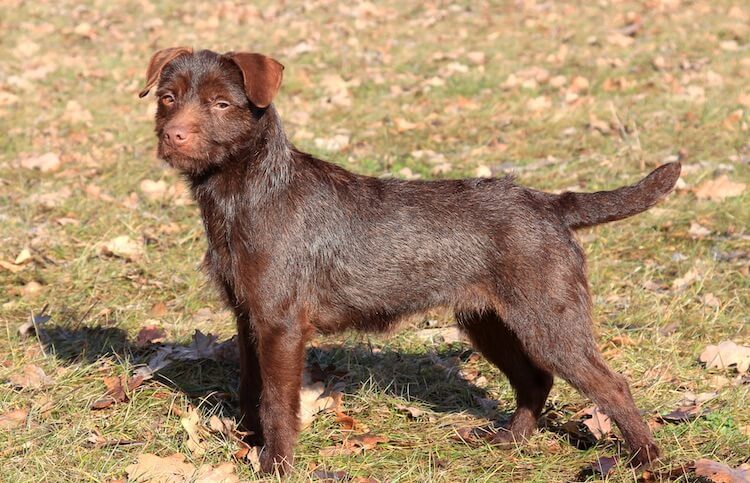 The Patterdale Terrier dog adores exploring the outdoors, however they should always be under supervision.

Their dietary requirements are straight forward, but their personality traits may mean they are less suited to novice owners and may benefit from an experienced owner who is regularly outdoors and has a robust training plan.

High quality dry kibble is appropriate for the Patterdale Terrier.

Fed twice a day, once in the morning and once in the evening as an adult is a good way of spreading out the daily calorie intake.

Foods which are formulated for small breeds are best and working dogs will require a food which is richer in protein to supply them with the energy they require for the job.

These little Terriers make excellent jogging companions and are also a hardy breed which can easily navigate tough and complicated terrains.

The only thing to bear in mind during such outdoor activities is their high prey drive.

Extendable leashes are preferable to allow your Patterdale Terrier their freedom to trot and explore whilst also being able to control exactly what they run after!

Keeping them leashed and under control is vital when outdoors so their acute sense of smell and strong prey drive don’t take over!

These guys are very energetic and need a minimum of 45 mins exercise per day – exploring the outdoors is their pastime. 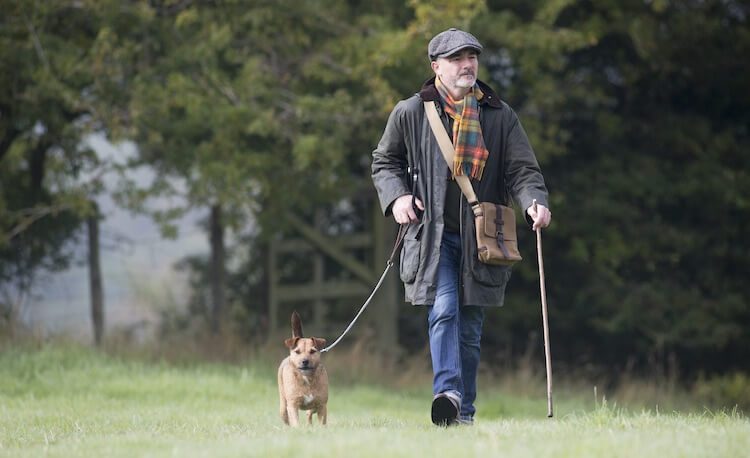 Training Patterdales must start from day one. Intelligent, strong-willed and stubborn, it will be challenging to train them when they are older and fully matured.

For this reason, they are suited to people who are more experienced with dog ownership and training because without this early training and appropriate handling, a Patterdale Terrier can easily rule the roost.

Positive reinforcement is the preferred method of training with the occasional use of negative punishment (i.e. denying a positive action such as attention) in the case of reducing the occurrence of undesirable behaviors such as barking.

As with any dog breed, socialization during the first few months of their life is vital in exposing them to different situations.

On average, the Patterdale Terrier lifespan is between 12-15 years of age.

Unfortunately, like with any dog breed, there are some health issues which are known to affect them and may reduce their lifespan:

The Patterdale Terrier is best suited for active and more experienced owners who love exploring the outdoors as much as this energetic furry friend.

They are still currently used for hunting and will suit the working lifestyle due to their strong prey drive.

A very loyal and active little dog who loves exploring the outdoors, hiking or jogging with their human companion is their favorite pastime.

These little guys are very intelligent and require plenty of mental stimulation to help keep their brains active and prevent boredom.

Their likely streak of stubbornness means potential owners need to be committed to using a training program but with dedication and love, the Patterdale will make a well suited and sweet-natured companion to a lucky human.

Let us know if the Patterdale is the perfect dog breed for you!