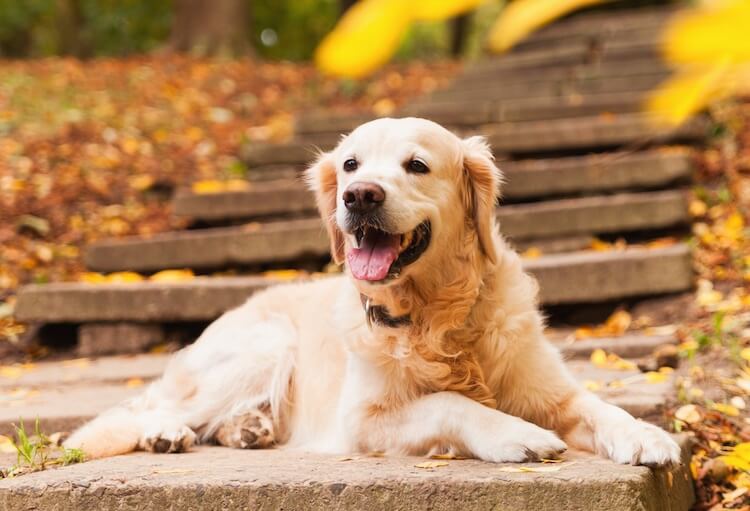 First seen in 18th century Scotland, the Golden Retriever was used to retrieve fowl and other animals that had been shot during a hunt.

In our modern era, this breed is more commonly seen as companion or service dogs than they are as a hunting dog.

Golden Retrievers are the ultimate family dog. The 3rd most popular dog in America, they are loved for their fun, bubbly, and playful personalities.

Their natural intelligence and athleticism make them a great pet for everyone, whether you’re looking for a companion or competition dog.

They are often portrayed as a low maintenance dog, but the truth is they need lots of exercise and grooming, so here are 10 things you should know before purchasing a Golden Retriever puppy.

In the 18th century, gun sports were particularly popular in the United Kingdom and wealthy noblemen needed a dog to retrieve their prize without damaging it.

Existing retriever breeds were not well equipped for the task as they tended to be specialists for water or land retrieval (not both).

Consequently, wealthy men began mating many different retriever breeds together in an attempt to create the ultimate land and water retriever.

Dudley Majoribanks (1st Baron of Tweedmouth) is credited as the founding breeder of the Golden Retriever dog.

The first litter belonged to a dam called Belle, who had mated with a dog called Nous.

These puppies were exactly what these noblemen were looking for, both agile on land and in water, and had a gentle grip on the foul they were retrieving.

After their inception, Golden Retrievers slowly began to make their way across the pond, gaining favor as both companion and working dogs.

They became recognized by the American Kennel Club in 1925. Shortly after this, in 1938, the official breed club of America formed.

9. There Are Three Types Of Golden Retriever Dog 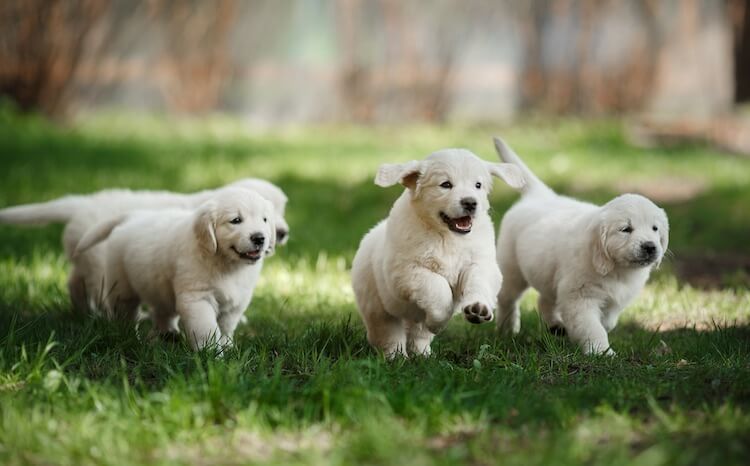 Although they are all considered to be the same breed of dog, each country (and founding club) has a different breed standard which creates a slight difference in appearance.

American Golden Retrievers stand between 20 and 24 inches tall and weigh between 55 and 75lb. Generally speaking, females are slightly smaller than males.

In terms of appearance, their breed standard describes them as a powerful and active dog with great beauty and grace.

They are easily recognizable by their long copper coats, floppy ears and goofy expression. They have long hair and feathering on their chest, stomach and tail.

Golden Retriever eyes are brown only and they have black noses at the end of a medium length snout.

They will often sit by their owners side while they eat, acting like they haven’t been fed for days!

On average, they need three cups of high-quality food each day. This will vary slightly depending on the food type (e.g. dry or raw) you are feeding and the size of your dog!

Their diet should be made up of approximately 30% protein, 12-18% fat and 30-35% carbohydrates (this will vary depending on your dog’s age, sex, and activity level).

It is perfectly natural to want to give your puppy treats every once in a while!

However, feeding excessive treats or unhealthy treats will result in your dog piling on the pounds!

When feeding your dog snacks, make sure it’s incorporated into their daily intake and try feeding them healthy foods, such as dog friendly fruits and vegetables.

When purchasing a Golden Retriever puppy, it is important to make sure you are buying from a responsible breeder.

Never buy a puppy advertised on social media, such as Gumtree or Facebook Market place, these are very often places populated by puppy farms.

The American Kennel Club has a list of verified breeders that it may be beneficial to choose from.

A good breeder will very often have a waiting list and so you may be waiting a little while for a puppy.

Golden Retriever puppies can sell from anywhere between $500 and $3,000 USD!

At the lower price point will be accidental litters, whereas more expensive puppies will be purebred litters and health screened parents.

Being the 3rd most popular dog in the country, it is quite common to find them in a local shelter.

If you would prefer to adopt, your local shelter is an excellent starting point, but you can also use:

6. The Golden Retriever Can’t Live In A City Apartment

The Golden Retriever is a medium-sized dog.

As a result of their size and energy levels, they don’t do well in tiny city apartments as they do need a certain amount of space to move around in.

Golden Retrievers can occasionally do well in a city environment, provided they are given more than enough physical and mental exercise to satisfy them.

This breed is more synonymous with a suburban family lifestyle, as the larger house provides them with the space they need, as well as the potential for a fenced-in yard, providing them room to play. 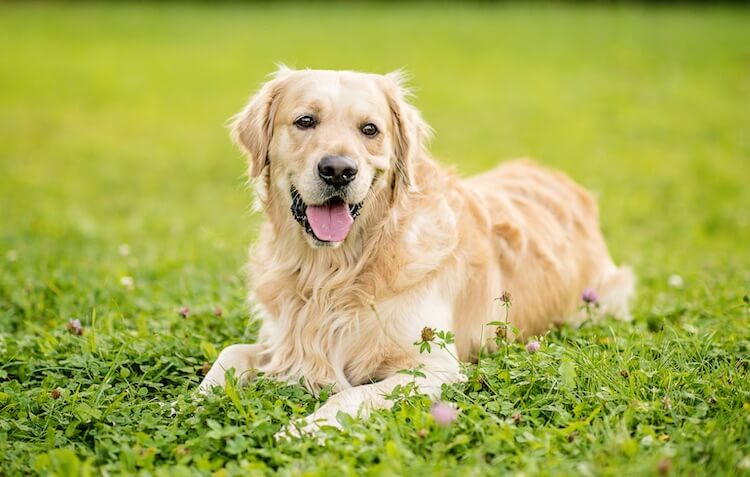 The Golden Retriever is known for being a healthy breed, living long and happy lives. However, like the majority of dog breeds, they are prone to some health issues.

Hip Dysplasia is a concern for this breed.

Caused by an incorrect formation of the hip joint, approximately seven in 1,000 dogs develop this condition characterized by lameness in the rear of the dog.

Milder cases of hip dysplasia can be treated with anti-inflammatory medication, whereas more severe cases will require corrective surgery.

Cancer is also an issue for Golden Retrievers. It is estimated that around 60% will pass away as a result of a cancerous tumor.

They are also prone to developing sight issues from eye conditions. Inherited Uveitis is a common issue with symptoms including: swelling of the iris, or colored parts of the eye.

Due to their naturally sunny temperament, they can be quite bad at communicating that they are in pain. Consequently, it is important to keep your eyes peeled for any subtle behavioral or physical changes that may indicate that your dog is sick.

On average, Golden Retriever owners pay between $33 and $49 USD each month to insure their dog.

4. They Need Around Two Hours Of Exercise Each Day

Ideally, they should be walked for one hour in the morning and one in the evening.

When trained, because of their retrieval instinct, they are very good at coming back when asked (i.e. recall). Until then, you shouldn’t let your puppy off-leash as they may enjoy running a bit too much!

Due to their endless energy, this breed may enjoy a more active home where they can engage in sports, such as jogging, agility or flyball. For a more unusual sport, try dock jumping.

3. This Breed Is Known To Be A Heavy Shedder 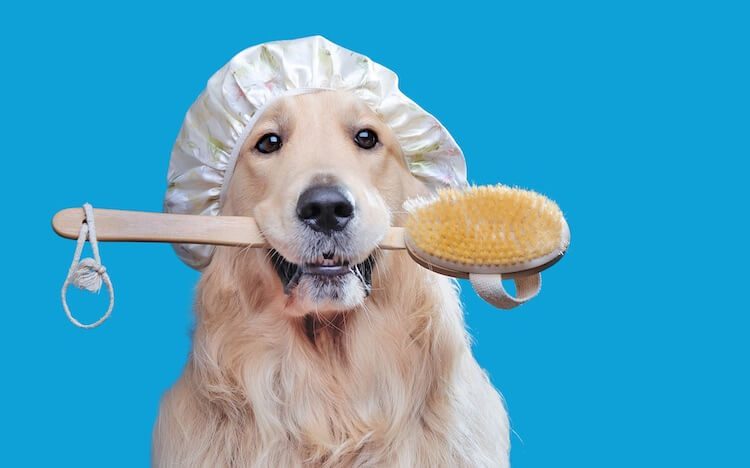 Not suitable for allergy sufferers, this dog needs a fair amount of grooming.

Their long golden coats will become matted if left ungroomed, so daily brushing is recommended. To try and combat their shedding use a deshedding brush (alternatively, a shedding glove can be used).

This breed is known by their owners to be a dirt magnet, at their happiest playing in a muddy puddle! As a result, they will need regular bathing.

When bathing them, you should make sure that the whole coat is dry, including their thick, dense undercoat. If the coat does not dry out fully, the prolonged dampness can cause many skin conditions.

Longer hair tends to grow in their ears so this will need cleaning once weekly to prevent ear infections. Nails will need trimming by a veterinarian or groomer every 4 to 6 weeks.

Although Golden Retriever dogs are very intelligent, they do not do well with long, drawn out training sessions, as repeating the same trick over and over can become very boring for them.

Instead, split sessions into shorter training periods, doing a few throughout the day as opposed to one long training session.

This breed, as with all dogs, responds best to positive reinforcement training. Using harsh, physical punishments to correct your dog will result in a damaged relationship between the two of you.

Golden Retrievers are selected to work as service dogs, not just for their caring and gentle natures, but because of their natural intelligence.

The only breeds said to be smarter are the German Shepherd, Border Collie and Poodle! As are many Golden Retriever mixes, such as Goldendoodle.

1. The Golden Retriever Is Known As A Happy-Go-Lucky Dog

Friendly and confident, the Golden Retriever can easily fit into family life. They are known for their kind natures and consequently make good pets for homes with young children.

They can be a great match for homes with children; their playful personalities often reflected in that of the children.

Golden Retrievers are also known to get on very well with other pets, including cats, rabbits, and guinea pigs.

If well socialized as puppies, these friendly dogs can get on with all animals.

A Golden Retriever will happily speed hours and hours chasing a ball or playing tug! They also enjoy working, and will happily do tasks for you when trained, such as fetching their leash.

Golden Retrievers aren’t known to be huge barkers, but equally, they are not silent all of the time! They are most likely to bark when they are feeling frustrated or wound up.

They do not tend to be particularly protective and as a result, make terrible guard dogs.

The Tamaskan Dog, also known as the Tam, is a breed of dog that has been selectively bred to look like a wolf dog. These wolf-like dogs are not purebred as they are crossbred with many other dog breeds including the: Siberian Husky German Shepherd Continue Reading →

The Maltese Shih Tzu (also known as a Malshi) is a small, loveable pompom. The perfect companion for the more “relaxed” family member. A designer dog breed, bred by crossing the gorgeous hypoallergenic Maltese with an oh so fluffy Shih Tzu. Not only is the Continue Reading →