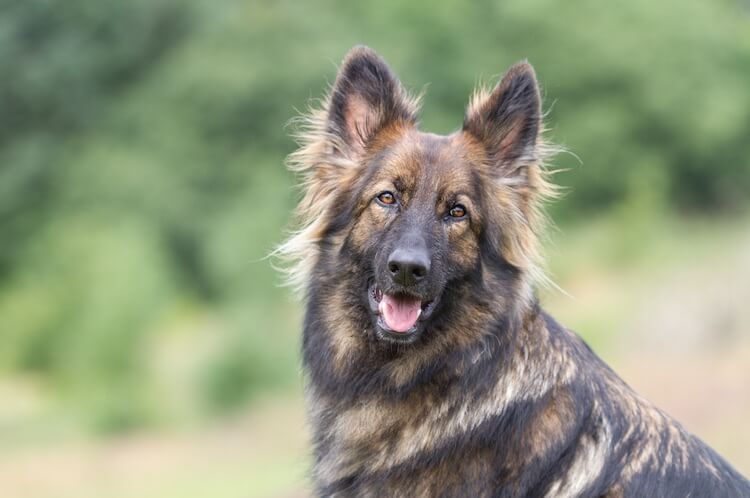 A true classic, the Sable colored German Shepherd is the most dominant coat color of all Shepherds, but what makes them so special?

Well, the Sable German Shepherd is the only color which fits the dog’s founding member’s strong ideology of a true Shepherd dog.

A breed suited to active individuals, couples or families, this canine is a large and intelligent, loyal and loving dog.

Here we will share with you our complete dog guide, from breed history and temperament to puppies and exercise needs, you will be able to understand if this breed is right for you.

What Is A Sable German Shepherd?

This intelligent and loyal breed can be accredited to Max von Stephanitz.

In 1899, Von Stephanitz met a dog named Hektor. Mesmerized and impressed with Hektor, so much so, he adopted him changing his name to Horand von Grafrath.

Von Stephanitz founded the Society for the German Shepherd dog, shortly after and then started a breeding program.

Careful selection of only the finest puppies was undertaken by Von Stephanitz and his dog, Hektor fathered a total of 84 puppies.

It wasn’t until two decades later, in 1908 when this breed was officially recognized by the American Kennel Club.

America’s love for the dog breed can be accredited to movie stars such as Rin Tin Tin.

You may have also seen one alongside Will Smith in “I am Legend”.

Today, the German Shepherd is the second most popular dog breed in the United States.

It is the German Shepherd’s physical and behavioral characteristics which attract dog lovers to this canine.

Their loyalty and kind temperament, as well as adaptability, make this breed a distinguished canine member to add to any family.

The Sable German Shepherd is known as the original dog, sharing DNA with their wolf ancestors.

It is the only coat color which did not stray from Von Stephanitz’s ideology.

The Sable coat is a dominant gene and was the first of the German Shepherd species.

The appearance of this canine is beautiful, however, the different coat colorings of the Shepherd have no effect on temperament, health or behavior.

Today, a range of German Shepherd colors are bred from white to black, and of course, the original sable.

As puppies, their ears droop down beside their head, however as they mature, their ears become erect.

They also tend to grow into both their head and feet.

On average, the litter size is around 8 puppies but may range anywhere from 5 to 9.

The best Sable German Shepherd puppies usually cost between $800 to $1,500 USD. This is dependent upon bloodline, pedigree and breeder.

It is important to know your breeder, an experienced and certified breeder will provide new owners with hip scores, and parental history (i.e. pedigree).

You should also get a good idea of your puppy’s temperament by meeting both parents (but as a minimum the dam).

Their temperament is patient and they respond well to their owner as they are self-assured and extremely confident, making them excellent working dogs.

Their prey drive is quite high, however, if socialized properly and from an early age then there won’t be any problems in eliminating any prey drive issues.

Once you become familiar with this breed then you will understand just how loving and big hearted they are.

They can make excellent guard dogs, offering protection for their owners. This combined with their high trainability, is what makes them so desirable for work within the military and police force.

Being one of the more intelligent canines, the Sable German Shepherd is more than capable of distinguishing between threatening and non-threatening situations.

However, they may be wary of strangers and therefore proper introductions may be necessary.

The Sable German Shepherd was bred for working, however their personality is very well natured.

Like all Shepherds, they can be described as loyal, loving, active and hard-working. Their willingness to work hard means they naturally have a strong instinct to please their owners.

Originally bred for their intelligence and working ability, modern Sable German Shepherds have strayed from this sole purpose and are now bred to be an excellent and domesticated family member.

They make an excellent addition as a fur-member to any home due to their trainability, loving personality, and loyalty.

The Sable German Shepherd gets along famously with children. They can be kind, gentle and playful when they need to be.

If introduced and socialized at an early age, then they can also get along well with cats and other animals.

Overall, they have a wonderful attitude towards everyone (except intruders) and can adapt to any lifestyle. They love hiking, beaches and even simple dog park trips.

Classified as a large dog breed, a male Sable German Shepherd weighs between 75 to 95 pounds, where the female is slightly lighter at 55 to 73 pounds.

With a strong, muscular and athletic build, their appearance is mixed with a sable colored coat.

Their body line mirrors an S shape where the top half of their body is taller than their rear as they are longer than they are tall.

The Sable German Shepherd has a long muzzle with a black nose and a strong jawline.

They have erect ears which sit on top of their hard skull.

Their eyes are usually dark brown. However, sometimes the White German Shepherd has enticing blue eyes.

Physically, they are a very strong breed, whose appearance has not strayed far from their wolf ancestors.

This dog can come in a variety of colors which include:

They usually have a black mask around their eyes, kind of like Zorro (which happens to make a great German Shepherd name)!

This black mask consists of black fur which is also found in a saddle pattern on their back. These markings are not found on the black color variations.

The Sable German Shepherd is recognized as having two different coat variants: medium and long.

Their coat will be coarse and relatively straight.

Additionally, they have a double coat, it is this double coat which allows the dog to adapt well as a working dog in different weather conditions.

A German Shepherd with a medium coat is the only coat which is accepted by the breed standard. However, this doesn’t mean that long coated German Shepherds are not bred, they simply can’t compete! 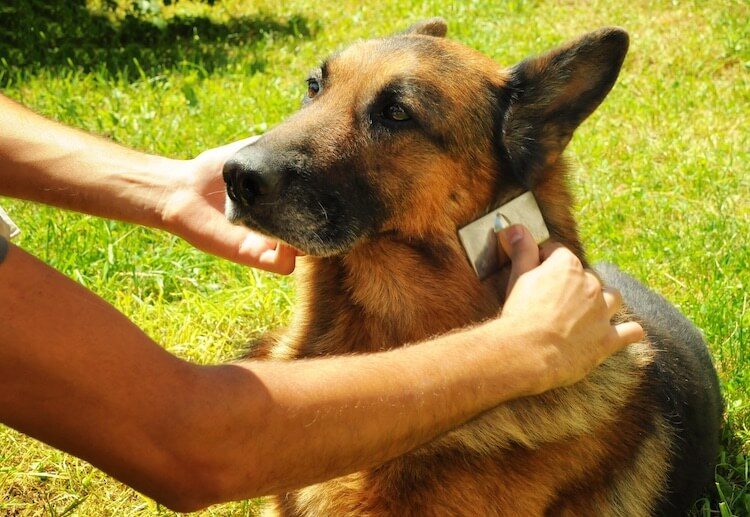 This canine’s coat will shed frequently. In fact, they shed in accordance with the changing seasons. You can expect a lot of sable fur around your home nearing the warmer months as your puppy shed’s their winter coat in preparation for summer.

Grooming during these months may be easier at the local groomers. They will literally blow off unneeded fur.

Try to accustom your puppy to the blow dryer at an early age if possible.

Once you get a puppy, you can definitely expect to vacuum a little more than usual.

Bathing your German Shepherd should only be done when necessary. For example; if they decide it’s a good idea to splash around in mud, or roll in their friend’s excretions.

However, unnecessary bathing can irritate your puppy’s skin as you will strip their fur of its natural oils.

Brushing your canine’s teeth is equally important. Bones are a good way of stripping their teeth of unwanted plaque.

Known for being an intelligent, active and athletic breed, they are easy to train but still require high amounts of exercise per day.

This is a breed who is suitable for active individuals, couples and families, but due to their high physical and mental requirements, they are not suitable for the elderly.

The Sable German Shepherd requires a high quality diet which is rich in protein. This is an athletic and working breed so their diet needs to provide them with the essential energy.

A popular option for this dog is a raw-meat based diet.

However, some raw-based diets do not provide the dog with their essential vitamins and minerals and therefore supplementation and dietary consultation with a veterinarian is critical.

If you opt for a wet or dry kibbled diet, then it is important to ensure that these diets are in accordance with AAFCO regulations.

As a puppy, you should feed your pooch two to three times per day. However, as they mature and become adults two meals a day is fine.

However, don’t expect them to become Usain Bolt straight away! As puppies, your Shepherd will not be yet capable of running for long periods of time (doing so will cause unwanted joint problems as adults).

Once matured and capable, this breed loves to go for daily runs.

Introduce your puppy to swimming when you believe they are ready. This will ensure that they can splash around in the pool, river or lake confidently.

We recommend buying some toys, start with a tennis ball and frisbee.

It comes as no surprise that the Sable German Shepherd breed is easy to train.

This is a breed who is known for their working abilities and intelligence.

Positive reinforcement methods are the current gold standard for training canines. The use of rewards (toys or food) combined with praise, is the best training method.

In fact, police dog trainers use toys as the standard form of reward for all German Shepherd puppy positive reinforcement training.

Because the Sable German Shepherd is an intelligent and curious dog breed, mental stimulation is a necessity.

This can be done through associating your dog with changing and different environments.

Games are also a great way to mentally stimulate your Shepherd.

This breed does well on games such as fetch, tug-o-war and hide and seek! They have a keen nose so hiding treats and toys is also a great idea.

The Sable German Shepherd is genetically predisposed to health issues which may have been the result of inbreeding during the start of this breeds formation.

One common health issue for the German Shepherd breed is hip dysplasia.

Hip dysplasia is a disease where there is ill formation of the joint of the hip’s ball and socket.

Because hip dysplasia is an inherited condition – there is only so much which can be done to avoid this disease.

However, your puppy’s environment may worsen or speed up the development of the disease.

The Sable German Shepherd is a classic dog breed and is a color variation which has stayed very close to the original breed.

This breed is known for being confident, protective, intelligent, loving and loyal – making it the perfect companion for anyone who is active and willing to give their time to this canine.

Caring towards children, an active running partner and a very loyal sidekick, there is hardly anything bad to say about this breed as long as they are trained and socialized properly.