The Tamaskan Dog, also known as the Tam, is a breed of dog that has been selectively bred to look like a wolf dog.

These dogs are not purebred, or recognized by any kennel club, as they are crossbred with many other dog breeds including the:

There is also some debate about other dog breeds that have been bred into the bloodline, some have speculated the following two breeds too:

Although there are many Wolfdogs, these dogs are distinctly separate, a unique breed with their own fanbase and breed association.

Growing in popularity since the 1980s, more questions are starting to be asked about these wonderful wolf dogs.

But what is there to know about these incredible dogs? This article contains seven must know facts about Tamaskans! 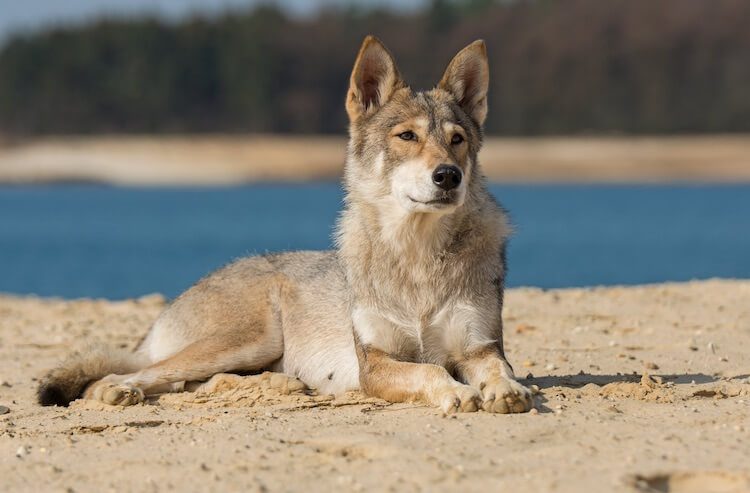 They Have A Very Short (And Yet Fascinating) 40 Year History

This dog was first seen in the 1980s making them a relatively recent dog breed; when compared to some dog breeds!

They were first bred when two breeders decided to import a group of five dogs (of Husky origin) into the UK from America. Lynn Hardey and Jennie Saxby are acclaimed to be the breed’s founders and started the Tamaskan Dog Register.

The breeders started by importing five huskies, where were selectively bred, in an attempt to breed a dog with the looks of a wolf, but the temperament of a working dog.

Over multiple generations of breeding the best stock (i.e. best temperament and health from other dog breeds), the German Shepherd and Alaskan Malamute were bred into the bloodline.

As a result of this breeding program, the first generation of Tamaskan puppies was born (F1).

During the 1990s, it was relatively common for one litter to look completely different from another. This was because there wasn’t a standardized breed profile and a lack of approved breeding stock.

It is this early genetic variation and lack of inbreeding that results in the healthy gene pool we know today. It is for this same reason that this dog has little to no genetic diseases.

Towards the start of the 21st century, breeders began to work together, breeding between litters (i.e. F2 and F3) to create a consistent appearance and temperament.

Since their first breeding in the 1980s, this dog has been slowly growing in popularity with fans across multiple countries including: America, Germany, Canada, France, and the United Kingdom.

2. The Tamaskan Dog Is Famous

Over the past forty years, this dog has made its way into the mainstream media.

They can also often be seen in the music industry, for example in music videos for groups such as the Lucretia Choir.

A dog of many talents, they have been seen in theatre and on Broadway. In 2016, a Tamaskan named Luchta played the role of “The Wolf” in Arthur Miller’s The Crucible.

They are often seen in media because of their wolf like appearance, but also due to their highly trainable nature.

These dogs were bred to be working dogs, and consequently they are incredibly trainable.

This dog has a natural curiosity when it comes to learning, and consequently it may be beneficial to use tools such as a clicker to encourage their learning.

It is also important to know that the Tamaskan dog are incredibly loyal dogs, and so punishment should never be used. Using positive reinforcement dog training is the best way to guarantee a healthy and happy relationship.

3. They Are Not A Purebred Dog

But Are Recognized In The Foundation Stock Service

Although the Tamaskan is a unique breed, it is not considered a purebred dog. Due to its easily traced pedigree (i.e. the crossbreed heritage) they are often considered to be crossbreeds (i.e. hybrids).

Consequently, they are not recognized by:

However, they are recognized by the American Rare Breed Association and are a member of the American Kennel Club Foundation Stock Service.

Since 2006, this dog has had its own breed club; the Tamaskan Dog Register (an international breed club).

The site acts as an international database for the breed, issuing registration paperwork and allowing owners to be matched with breeders near them.

Despite the fact these puppies cannot be sold as kennel club registered, this doesn’t stop breeders from giving them premium prices, selling between $600 to $800 USD per puppy (with a litter size of between 6-10 puppies).

If you would prefer to rescue a dog as opposed to adopt, you may struggle to find one of these dogs in your local shelter!

It may be a good idea to check specialized pages, such as Tamaskan Rescue (a community page that rescues these dogs all around the world)!

4. They Will Exercise For 90 Minutes Daily

Due to their sled dog linage, these dogs are incredibly active!

These dogs need between 60 and 90 minutes of exercise every day, and so are better suited to active individuals or families who can give them the walks they crave.

On average, these dogs need around 18 miles of exercise per week.

One of the benefits of these walks is the build up of muscle tone in the dog’s body, essential for this dog as they are muscular in appearance.

Owners may also consider running, hiking or supervised swimming with their dog in an attempt to chip away some of that unrelenting energy.

These dogs make excellent agility champions, thriving on the challenge, and will also enjoy working – thanks to their German Shepherd lineage.

They make wonderful herding dogs, therefore it may be a good idea to work your dog to encourage mental as well as physical health.

5. They Come In Four Different Colors 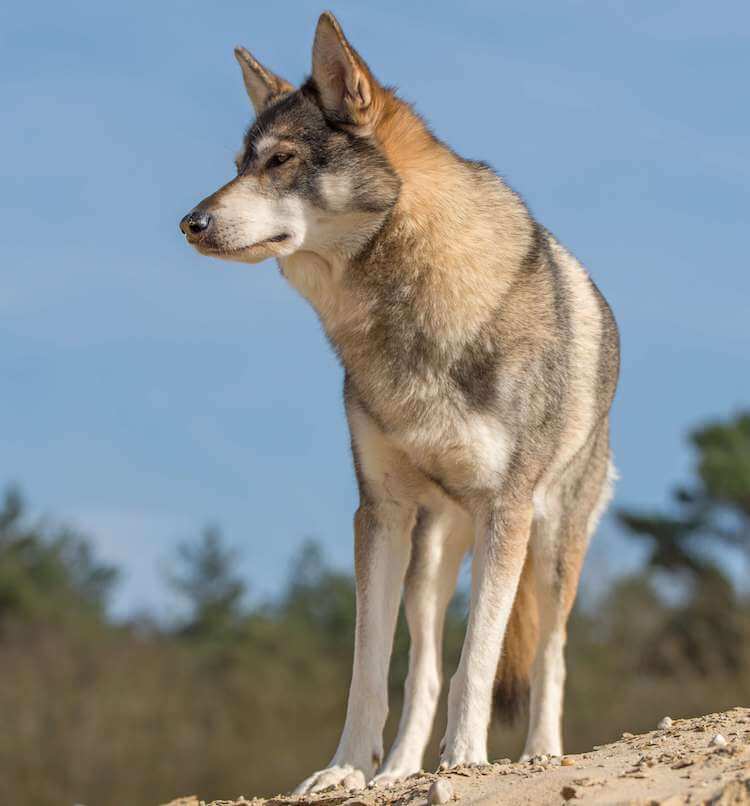 They look exactly like a wolf, so you should consider using a wolf name for your dog.

Standing around 24 to 28 inches tall and weighing between 55 and 88 lb, this is a large dog breed.

Although, when there wasn’t a recognized breed standard, there were some instances of them weighing up to 100lb and standing around 33 inches tall, making them a giant working dog.

Females are slightly smaller than males and have a distinctly feminine look, while males are much more heavyset and sculpted.

These dogs have a thick double coat, like that of an Alaskan Malamute or a Siberian Husky, and so are very fluffy to the touch.

With a long black nose and triangular ears who can forget their impressive tufted tail and beautiful appearance?!

They have warm, almond shaped eyes that can be either brown, hazel or amber. According to their breed standard, blue eyes or mismatched eyes are not acceptable for a pedigree dog.

But Are Very Friendly & Affectionate

Despite the fact the breed is not aggressive, their looks may be a perfect deterrent for anyone looking to make trouble, although they are more likely to be killed with kisses than anything else!

They may look like a fierce and angry wolf, but this dog breed is known to be a kind, loyal and affectionate dog.

Being excellent with children (playing gently and having great patience) they are highly social dogs, and love to be at one with the family.

Due to their loyal and devoted nature, they can suffer with severe separation anxiety. This can be combatted by encouraging them to be self-sufficient as a puppy.

Beyond this, they are very intelligent and consequently do not do well with being bored. Being bred to work, with some of the world’s most intelligent dogs as ancestors (i.e. Huskies), makes for one very bored dog if left unstimulated for long periods!

The Tamaskan can be aloof with strangers and may take a while to come around.

This can be aided with socialization as a puppy, introducing them to as many people and places as possible while young can make for a motivated adult.

However, do not let the less desirable qualities of the Tamaskan dog put you off…

They love to be by their owners’ side, and their larger size does not dissuade them from being lap dogs.

Enjoying the serenity of the countryside and loving nothing more than a good romp in the outdoors, they love a good walk!

7. The Tamaskan Is Incredibly Low Maintenance

When It Comes to Food and Grooming – This Dog Is Easy 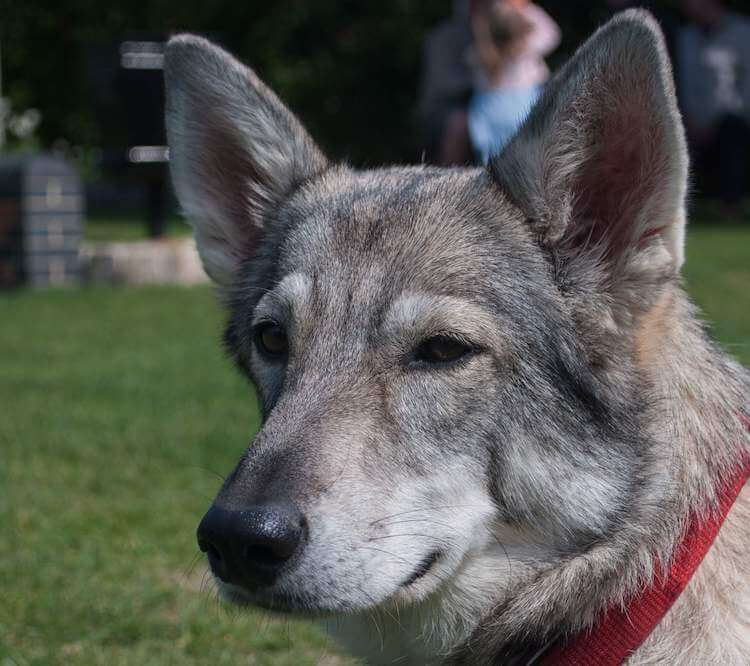 Beyond their exercise requirements (which are anything but low maintenance), this dog needs very little else.

They do well on a variety of diets, including dry, wet and raw.

If you choose to feed dry or wet commercial food, the food must be age appropriate (i.e. puppy, adult or senior dog).

Owners may also wish to consider a brand specifically formulated for working dogs. It should also be grain free and high quality, as dogs struggle to digest a lot of the complex carbohydrates found in low quality dog foods.

When it comes to grooming requirements, this dog is incredibly low maintenance:

The Tamaskan dog’s coat produces natural oils that clean the coat. These oils should not be interfered with through bathing.

It is also not necessary to clip this dog, meaning they are relatively fuss free!

They will on occasion need their nails trimmed if they are more inactive, but with their recommended activity level they should be able to wear down their own claws.

Remember that nail trimming should only be done by a qualified professional, such as a groomer or a veterinarian.

The Tamaskan dog is a smart, loyal companion, perfect for an individual or family looking for a high-octane dog.

These fun-loving dogs are perfect for anyone looking for a hiking, swimming, or jogging buddy!

However, if you are not up for their weekly mileage, perhaps consider a lower maintenance wolfdog, such as a Husky Cross or a Miniature Husky.

With patience, love (and a lot of exercise), the Tamaskan can thrive in the urban or city environment.

Do you have this dog breed at home? Thinking about getting a puppy? Or just a superfan! Leave us your thoughts on this breed in the comments.

Beagle Lab Mix: 15 Facts Which We Love About The Brilliant Beagador

You may have heard of the brilliant Beagle, or the lovely Labrador, but what happens if you put them together? Why the Beagle Lab Mix of course. This cute crossbreed first came into the dog world around 30 years ago and has been developing a Continue Reading →

Scrolling through social media you often come across fluffy dogs who you absolutely fall in love with. Not surprisingly, due to their teddy bear appearance, these typically white dog breeds are usually high on this list of love at first sight! But there is a Continue Reading →

Originally from Texas, the Texas Heeler, is stealing the hearts of thousands of families and people across America. This dog has a stable temperament, great intelligence, working pedigree and a beautiful appearance! Highly adaptable, this dog adjusts well in many different environments, making them an Continue Reading →

Shorkie – A Complete Guide to the Shih Tzu Yorkie Mix

14 Dog Shelters Speak Out: What You Should Know BEFORE Adopting a Dog