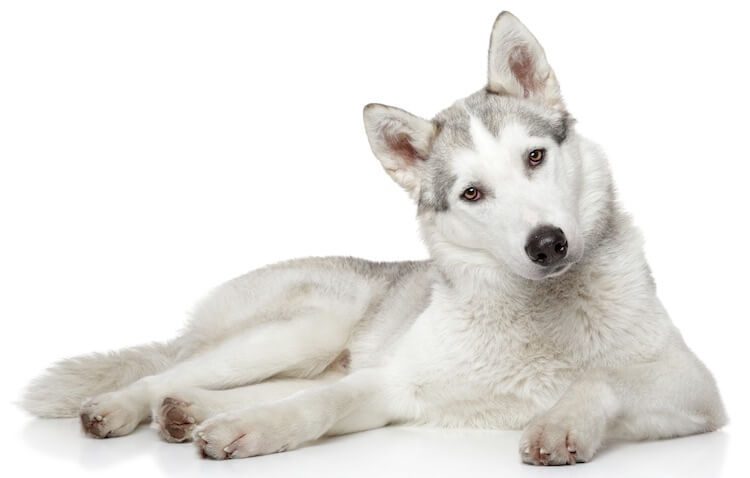 A White Siberian Husky may be one of the most visually pleasing dog breeds there is!

These gorgeous gentle giants are known for their friendly personalities, dedication to their owners and quick wit.

It’s no wonder that Siberian Huskies are ranked the 14th most popular dog in America.

But what is there to know about the rare White Husky? How different are they from other Husky dogs?

Continue reading to find out more… 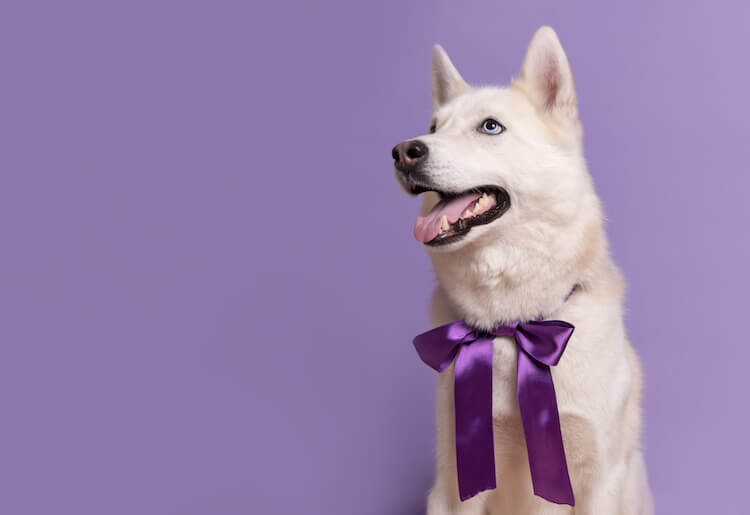 The Husky was first seen in Northeast Asia, first bred by the Chukchi people, this dog was used as a sledding dog.

The Chukchi people also recognized these dogs made great guardian and companion dogs too.

First evidence of this breed dates back around 3,000 years ago, making them one of the oldest dog breeds known to man.

The pure White Husky is the result of a recessive gene.

To get the pure White Alaskan Husky, two White Husky dogs must be bred together to produce a litter of white puppies.

It is possible to breed a White Husky puppy from two carriers of the recessive gene (i.e. traditional Huskies carrying the gene), although this is less likely to result in pure white puppies.

The White Fluffy Husky was first seen in 1909.

Huskies were brought to Alaska for an international sledding competition. The race consisted of a 408-mile race, which the Husky team won. From here onwards, the Husky was extremely popular in mainstream culture.

In 1925 a dog called Togo, and his owner Lenhard Seppala, were responsible for transporting an essential vaccination to Nome where a deadly disease had broken out.

After this, Togo went on to father many litters and is widely considered to be the father of all modern Huskies in America.

White Husky dogs are recognized by the American Kennel Club.

When the breed was first registered in 1930, the first Husky registered was white.

In 1938, the Siberian Husky Club of America formed which exists as a national network of Siberian Huskies, and hosts their own competitions including sledding, agility, obedience and more. 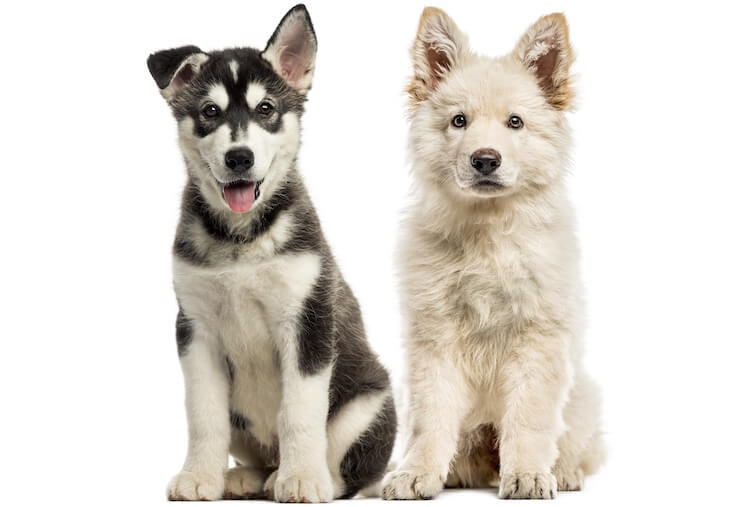 Although they are considered to be rare, these dogs do not tend to have a high price tag, a White Husky puppy will sell for between $500 and $1,000 USD.

Huskies are very intelligent dogs, and like people they mature at different rates.

While they are physically at their adult size at 12 months of age, their personalities usually mature somewhere between 1 and 7 years old.

A puppy, within their fist 12 months, should grow to be between 35 and 57 pounds depending on their sex, parents and environment:

The White Husky, like all Huskies, is known for his friendly and loving personality, endless energy and zest for life.

It is very rare to find a White Siberian Husky barking. Instead, this breed tends to howl to communicate with others.

When bored, Huskies are known to entertain themselves by howling for hours; something to consider if you have neighbors living nearby!

Sometimes nicknamed the Houdini of dog breeds, the White Alaskan Husky is very good at escaping, especially if they are somewhere they don’t want to be.

Consequently, owners are recommended to put a six-foot fence around their yard with no pawholds to prevent a great escape!

Due to the Chukchi people allowing them to hunt in the summer months, the White Husky is known to have a very strong prey drive.

Their prey drive, coupled with their escape skills, makes it all the more important for a tall fence, as they will often bolt over a shorter one in pursuit of a squirrel or the neighbor’s cat!

White Husky dogs are bred to be pack animals and consequently they are known to be friendly and social dogs.

These curious dogs always want to be a part of the action and are often found getting their noses into trouble!

This breed is incredibly social, their pack instinct drives them to crave the presence and attention of their owner.

When left alone for longer periods of time they may become destructive or even depressed with separation anxiety.

Much to owner’s delight, these clever dogs often develop a sense of humor and love to play tricks on their owners often seen “laughing” at their expense.

Most commonly, Husky dogs get on very well with children.

Their playful and youthful nature captivates young children and encourages hours of play in the yard.

This being said, young children should never be left unsupervised with a Husky, as sometimes they forget their size and become boisterous; this is especially prevalent when they are excited.

The White Fluffy Husky is known to get on very well with other dogs too.

With their strong pack mentality, they do best with frequent companionship in the form of people or other dogs at home. However, they do not do so well unsupervised with other household pets as they have a strong prey instinct.

A White Husky will grow to be a medium-sized canine.

On average, males are between 21 and 23.5 inches while females are slightly more petite, standing at 20 to 22 inches.

While they are quite tall, they should be lean too, weighing between 35 and 60lb.

These dogs are easily identified by their thick double coat, triangular ears and lean but tall bodies.

They are smaller than their cousins, the Alaskan Malamute.

Siberian Huskies have very fluffy tails that are often noted for curling up over their back.

In fact, while sleeping, huskies are often seen tucking their tails under their noses in a movement called “the Siberian Swirl”.

Huskies eyes may be black or blue, and it is not uncommon for them to have a heterochromia (one eye of each color).

While this article has focused on the rarer White Husky, this breed actually comes in many different colors including:

Many pooches have piebald type spotting, however all colors are recognized by the AKC.

Noted for its very thick double coat, the White Siberian Husky has a dense undercoat and a thinner, spikier overcoat.

The coat is designed to insulate the dogs during cold artic winters and reflect the sun during the summer.

Twice yearly, a Husky will blow their coat, shedding their undercoat and growing in a new seasonal coat. During this period, brushing is a daily requirement, but outside of their seasonal shedding they will need brushing once weekly.

A Husky’s coat is perfectly adapted for temperature regulation and so clipping their coat is not necessary. However, regular cleaning of their ears, checks of their eyes and nail clipping is important. 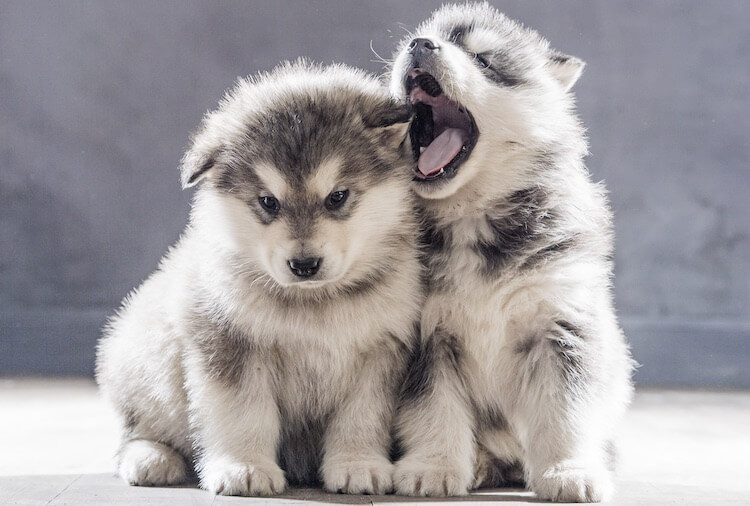 Although beautiful, the White Husky is not a lapdog.

True, they need companionship and cuddles, but they need lots of stimulation, both mental and physical. As a result, they are best suited to homes with owners who can keep up with their active needs.

This dog also does not do well with being kept in a small apartment and so needs an owner who has the space for them to run around in a safe and secure place.

What and when to feed a White Husky is very important.

It is important to never feed this dog before exercise. You should feed them two hours before exercise so that they never exercise on a full stomach as this can lead to digestive issues such as gastric torsion.

Ideally, Huskies should eat two smaller meals a day as opposed to one big meal. Whatever owners choose to feed, it should be the equivalent of three cups of dry food each day.

Many Husky owners recommend a bones and raw food diet for their dog.

Due to their natural hunting instinct, it is widely believed that this is the diet best suited to the White Husky.

However, a Husky dog can do just as well on a high quality kibble too.

The White Husky is often noted by lovers of the breed for their endless energy.

Bred to run miles and miles each day, this breed loves to be outside and moving!

Consequently, we recommend around 90 minutes of exercise each day.

Ideally, this should be split into two 45-minute walks, with lots of mental stimulation in between.

Huskies do not like to swim. While they may enjoy walks on the beach or dipping their toes in a doggie pool, they are not keen swimmers and consequently you may wish to avoid day trips to lakes.

Try taking your White Husky trekking or running instead, this will be much more to their liking.

Remember, they have a very strong prey drive, so you may struggle to recall them in an emergency. As a result, using a long training leash may be useful to give your canine room to explore but still give you control.

Huskies are working dogs and consequently are naturally intelligent and eager to please.

Because of their working background, the White Siberian Husky is known to have an extremely stubborn streak.

Never lose your patience and shout.

These clever dogs have long memories and a strong loyalty to their owners so any sign of aggression will lose their trust.

Instead, try to encourage your White Husky by rewarding the behavior you want to see and ignoring those you don’t.

In a very short period of time, these canines will begin to learn and mold their behavior to match.

The White Husky is known to be a very healthy dog.

On average, they live around 12 to 14 years, but there are reports of them living to be older.

The two health conditions that primarily affect the Siberian White Husky are epilepsy and eye issues.

Both are thought to be genetic and so it may be possible to test for the genes in the parents before breeding or purchasing a puppy.

Despite their larger size, it is very uncommon for Huskies to develop hip dysplasia.

This does not mean it is impossible, but a 2008 report by the Orthopedic Foundation for Animals ranked Huskies in the bottom ten for hip dysplasia (with only 2% of these canines carrying the gene).

As previously mentioned, Togo the Husky is widely considered to the father of the American Husky.

This makes inbreeding a distinctive possibility as he has greatly narrowed the gene pool; known as the founder effect.

Because of their white fur, the White Husky is also prone to deafness. The recessive gene that dictates their white fur caries the gene for deafness too.

The White Husky is a happy, independent and playful dog.

They love the company of their favorite human(s) and enjoy nothing more than a long walk together followed by play and belly rubs.

A great choice for experienced and active owners looking for a new challenge they do well with plenty of room and stimulation!

They do not do well in environments where they are in small apartments and so giving them space to roam is essential.

Do you have a wonderful White Husky at home? Are you thinking of getting one? Let us know your thoughts on this brilliant breed in the comments.