Whether it is a trail of slobber across your face or surprisingly around the fireplace, dog’s LOVE to lick!

Many owners find it endearing, a sign of affection and some of us like to see our dog’s practicing good hygiene.

However, more often than not, why do dogs lick is not as simple as your dog just wanting to spend the day kissing you; there are many reasons why your dog may lick their paws, people, faces and surfaces in the environment.

Licking is totally normal for dogs in most situations (e.g. grooming or as a form of first aid). But, there are times when it may indicate underlying concerns.

Start by taking note of what they are licking and then take a look at our list of reasons for why dogs lick below to find out why! 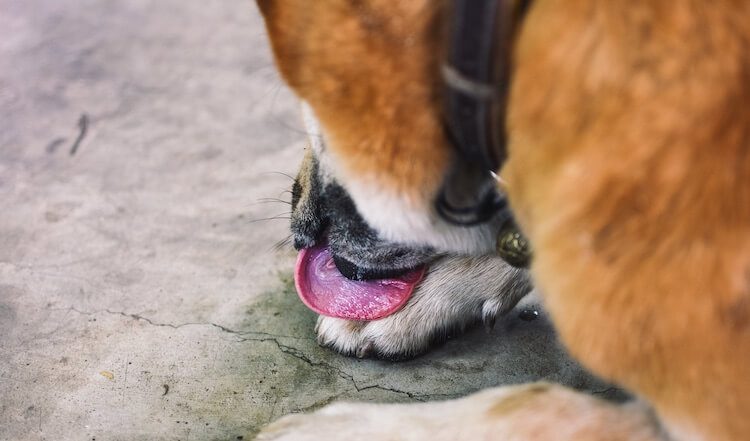 If you made a tally of a day in the life of your dog, licking paws (as well as eating grass) would come in pretty high. More often than not, dogs will lick their paws to groom themselves.

They have come in from their walk, or even from a run around the garden, you will find them preening themselves and even having a little nibble; this is generally expected behavior.

However, this can become excessive if your dog is irritated by something they walk through or on. Grasses, pollens and toxic chemicals can all irritate their sensitive paws.

You also run the risk of salt or antifreeze exposure during extreme weather. Not only does this irritate them externally, but through grooming, they ingest it and can cause subsequent damage internally to their stomach.

It is best to rinse your dog’s paws when returning from a walk and give them a towel dry. In extreme climates you can even apply an all-natural paw balm or simply some coconut oil.

Dogs will also lick other parts of their body that are painful or stiff. If your dog has strained their leg during a walk, they may start licking the affected area.

Thanks to a protein found in the saliva, excessive licking is usually identified by a reddening of the hair on the area being licked, so it is easy to notice.

If your dog begins to lick their paws excessively it can cause trauma to the hair and skin, leaving inflamed, red and sore patches. This is why the underlying issue needs to be understood and fixed as soon as possible.

9. Why Do Dogs Lick People?

Some dogs lick people, and some dogs don’t. How they have been raised plays a huge part in this.

If a dog has been allowed to lick their owner, they may lick other people too. If, however, an owner doesn’t want this behavior, then they will ignore it. The dog won’t get a response and often will cease to do it.

Those of us crazy dog owners, who couldn’t care less whose canine slobber we get covered in, usually become jovial, and smile or laugh. The dog is receiving positive reinforcement and will repeat this behavior.

Dogs can read human emotion and begin to learn it as something they should keep doing. 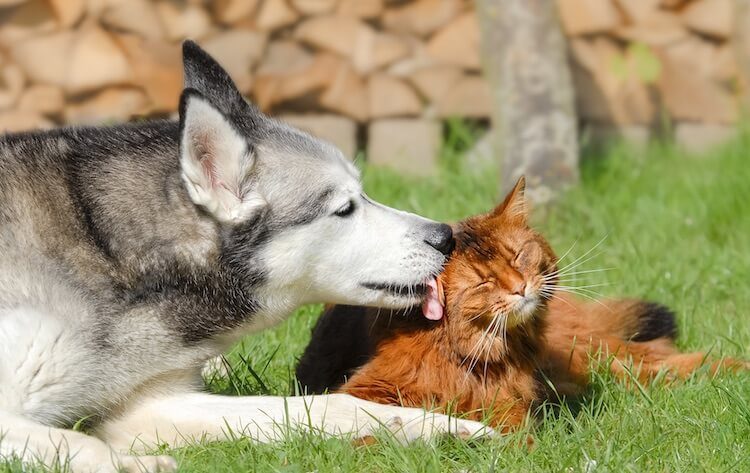 It’s impossible to know for certain why canines like our faces, but we think it comes from their puppyhood.

If you notice how Dams behave with their puppies, they spend a huge amount of time licking and grooming them.

The interesting part is, the more a Mom does this to her offspring, the more resilient her puppy is as they grow (they are also less reactive to stress). It is believed that this behavior reduces the amount of stress hormones in the puppy’s body.

Because of this, we could argue that our dog licks our face because they are trying to help soothe us by imitating the behavior they experienced as puppies.

The less endearing explanation is, as a dog’s sense of smell is so great, they have sniffed out a remnant of food or drink around our mouths and just want a taste.

7. Why Do Dogs Lick Your Feet?

Dog’s explore their world through smell and sight.

In terms of biology, feet are the smelliest part of the human body.

Human feet have more sweat glands per inch, than anywhere else on the body. Wearing tight fitting socks and shoes also keeps moisture and heat in, providing a great environment for bacteria to multiply.

Dog’s have a great sense of smell.

When there is a great mixture of water, ammonia, potassium, thiamine and riboflavin (and then a whole host of different bacteria), why wouldn’t your dog have a lick and see what they can find?

Maybe they’re just drawn to the smelliest part of the human body?

While dogs do explore their world through smell, and smell contributes massively to the taste experience, it is unlikely that when your dog is licking the air to try and taste it.

More commonly, they are stressed.

Licking is a stress behavior for canines. Stress is when your dog feels strained or pressured by something.

Notice when your dog is licking the air; what is happening in their environment?

It’s important to notice the trigger, and also watch for other body language signs that may indicate stress such as: drooling, panting, yawning, pacing, head flicking or turning away.

Find the trigger and remove it. Licking is a warning signal; ignorance often leads to escalation.

5. Why Do Dogs Lick Their Nose?

As we discussed in the chapter explaining why dogs lick the air, this behavior also has a similar explanation.

When a dog licks their nose, this is most likely a sign of stress in your pet. It could be secondary to drooling, but it still shows stress.

It is crucial that you find the trigger and remove it from their environment.

For the past decade, the dominance theory has been debunked and has been proven to cause stress and anxiety in pets:

If your children are encroaching on your dog’s personal space and your pet begins to lick their nose; teach your kids that the dog needs space too.

A safe space for your dog can be great in this situation to reduce stress. Set up a crate (or space under the stairs) in a quiet place in the house that is just your dog’s. They know they are safe, and it sets clear boundaries for the kids. The dog can come out to play, if he chooses to. He can also retreat when he needs to.

4. Why Do Dogs Lick Your Hands?

I am sure most of us dog parents would love to think that it’s a kiss on the hand. Unfortunately, this isn’t correct!

The chances are, you probably just got some leftovers or grease on your hands. A dog has on average, 220 million olfactory receptors (the parts which help him smell). Humans only have 5 million.

Even if you have wiped or washed your hands, your dog can probably still smell a little bit of your cheesesteak that you had for lunch!

Think about what you might touch over the period of a few hours: doors, buttons on elevators, keyboards, phones, tablets and laptops. Now think about what everyone else touches before you shake their hand.

It is no surprise; your hands will be full of scents. So your dog, being the very inquisitive pet he is, will be learning a massive amount about the environment you’ve been in just by licking your hand.

3. Why Do Dogs Lick Furniture? 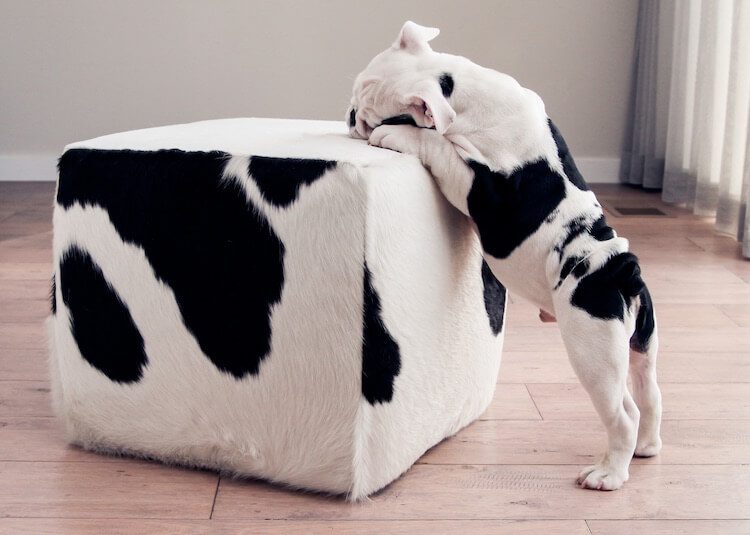 If your dog is licking furniture, there could simply be some leftovers of food smeared on it, or he could just be trying to scavenge.

There is however another more worrying reason for why your dog is licking furniture.

Earlier, we discussed that air-licking or lip-licking could be a sign of stress in your pet; unfortunately excessive licking can also be symptomatic of anxiety (like an obsessive-compulsive disorder in humans).

We also explored how a Dam frequently licked their pups to groom and to soothe them; adult dogs will continue this behavior for the comfort it brings.

Along with chewing, licking reduces levels of the stress hormone cortisol and when a dog licks furniture this is no exception.

When dogs are suffering with anxiety, if they are offered stuffed kongs or something similar to lick, they show a short-term improvement in behavior.

If dogs learn that licking things makes them feel better, they will continue to do so. We know dogs learn through the consequences of their behavior; so they are almost programmed to do what feels good.

In an anxious dog, you would notice other behaviors alongside excessive licking:

If you are concerned that your dog is struggling with their emotional state, then it’s best to identify potential triggers and remove them immediately. After removing the triggers from their environment, seek the advice of a force-free trainer in your area.

2. Why Do Dogs Lick Wounds?

Dogs seem to seek out wounds instantly and this is for good reason.

Researchers have found growth factors and histatins in saliva which can help with wound repair. The histatins found in saliva are antimicrobial and antifungal; so, whether he is licking his own or your wounds, he really is trying to keep it free from infection.

Their tongue also removes debris from the wound which reduces the risk of infection.

Since licking both reduces the stress hormones, as well as cleaning the wound, it also helps to soothe your dog if he is in pain.

The risk arises if your dog is a greedy-eater or a poop-eater. Although they do have an impressive saliva make-up, there’s no denying that they’ll pick up bacteria from scavenging or poop, which might not be good to their wound.

1. Why Do Dogs Lick Their Lips? 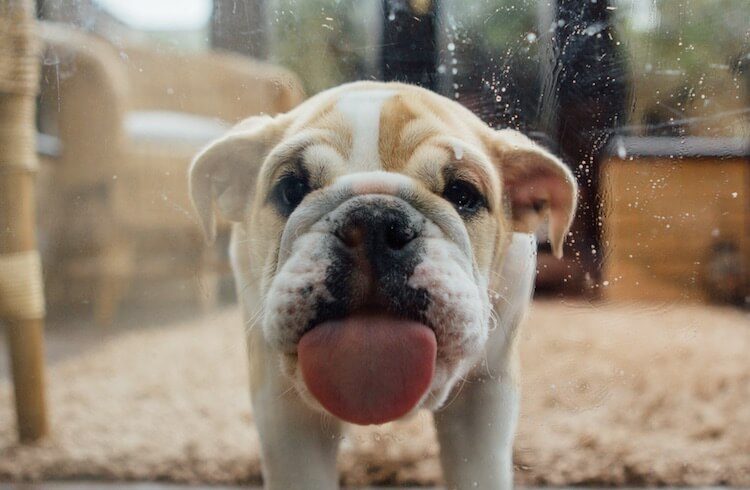 If someone is touching a part of their body that triggers the licking reaction, then get them checked out by a veterinarian.

When a dog licks their lips, it is most likely stress related. Along with yawning, turning away, pacing, drooling, frantic behavior, hiding and tail-tucking, lip-licking is a very common stress-signal in dogs.

Dogs will lick their lips after they’ve eaten or drank, and this is to be expected. But if your dog is lip-licking and they haven’t eaten anything; look at what is going on in their environment

It is most helpful when watching interactions with people or other dogs.

Many dogs will just lip-lick if they are feeling uncomfortable around a person or a new dog. They won’t bark, snarl, or growl. This signal is often missed, and unfortunately, they learn that they need to be louder next time.

You may notice it if your dog is being examined in the Veterinarians, or if your child is being disrespectful of your dog’s space.

Why Do Dogs Pant? The Science Behind Dogs Panting

You’re walking past the dog park, Fido has just dropped his ball at his owner’s feet again. He is panting; typical? Of course! He’s trying to cool down. Panting is how a dog cools themself down after chasing their ball in the park. But what Continue Reading →

Dog Gagging, Dry Heaving, Coughing & Retching: What You Should Know

A gagging dog can make an incredible noise, it is as if your dog is trying to vomit but nothing comes out. Sometimes dogs can retch or cough as they try to clear their throat of debris or mucus and other times it can be Continue Reading →