From Poodles to Pugs, it can sometimes be hard to believe that dogs belong to the same species as the Wolf!

It becomes slightly easier for us to comprehend their shared DNA when we see a wolf dog. These canines are very wolf-like in their appearance with erect ears, longer muzzles, and large teeth.

Adopting a wolf dog is not for the faint-hearted or first-time owners.

While they are domesticated, these breeds have maintained some of their historic traits such as: high energy, an independent nature and strong willed temperaments.

Families with active lifestyles are usually better suited to wolfdogs because they can provide their dog with much needed exercise and mental stimulation.

However, all canines have their own quirks and care requirements, so keep on reading to see if any of these 8 dogs that resemble wolves will suit you and your family.

Standing between 24-26” in height, and weighing in from 44 to 57 pounds, this strong and agile canine is best suited to large homes with secure yards.

The Czechoslovakian Wolfdog is an intelligent and confident breed that needs an experienced owner.

They are generally better suited to adult-only homes as younger children can be dismissive of their needs; however older teenagers with a good handle on training and socialization would be a great friend.

They are active and alert and will need regular exercise, which includes their physical walks and runs along with mental stimulation. You can also use brain games to challenge them and keep their interest.

The facial features of this wolf dog give them the appearance of their wolf ancestors: their body is athletic and lean.

You will find the Czechoslovakian Wolfdog in three distinct colors:

They have a thick double coat, to protect them from harsh weather so they come in relatively high in grooming needs with two major blow outs per year.

The magnificent and majestic Czechoslovakian dog is devoted to their owners, but comes in high on exercise and grooming needs. Because of this, they are an impressive canine for experienced owners.

Bred to look as much like a wolf dog as possible, the Tamaskan is not officially a purebred dog.

First appearing in the 1980s this breed has a relatively short history. Early into the 21st Century and have we now have standardization across the breed, with more and more litters similar in appearance.

Despite their short history, in 2006 the official breed club was founded with a goal to ensure good health and responsible breeding, with support to match owners to puppies.

Like most wolfdogs, they are high in energy! So, this breed requires a very active owner who can provide them with lots of exercise. They are best suited for active families who have their own yard.

Just like a Czechoslovakian, they have a double coat which requires plenty of grooming.

Whilst they may look like a wolf with a fierce appearance, the Tamaskan is affectionate and loyal – they are the ultimate companion for families who understand their needs.

Tamaskan dogs can live with families but are best suited to older children due to their size. Like any other wolf dog, they can suffer from separation anxiety, so are best in a home where someone is usually there (perfect if someone works from home)!

A smart, loyal companion, a great addition to an active family who spend plenty of time outdoors and at home.

The Northern Inuit is the result of breeding German Shepherds, Siberian Huskies and Malamutes.

Because this breed is not recognized by the American Kennel Club it can be a little harder to find reputable breeders.

However, members of the Northern Inuit Society are the only ones allowed to breed this impressive dog and they are very protective of the breed’s lineage and bloodline!

Friendly and affectionate with their people, this wolf dog can be protective when faced with strangers.

Their utter devotion to their parent, can cause them to develop separation anxiety which may result in howling and destruction.

Working long hours and being a weekend warrior is not the life for this guy! They are suited to active homes, where someone is usually around.

Standing anywhere between 23-30” tall they can weigh in anywhere around 55-110 pounds. They fit in well with most families but be mindful of their large size with small children.

You will find this wolf dog in many color variations including: gray, black, sable and white.

They too have a double coat, which will need regular brushing. They are at risk of impacted undercoat if you don’t which affects their ability to self-regulate.

A swift and strong breed, the Northern Inuit is quite rare and is ideal for active families with a love for being outdoors who live in a cooler climate.

Indigenous to the whole of America, the Native American Indian dog is a working breed.

This dog’s working past gives you a clear idea of their temperament as they are athletic, strong and intelligent.

Now, they are often used for a range of jobs including: law enforcement, search and rescue, therapy, hunting and tracking and nannying.

Not being a purebred dog, this dog is not recognized by any major kennel club and doesn’t have an official breed club.

This opens the gates for unscrupulous breeders, ensure you research and find a responsible breeder who breeds this dog for health and temperament from a strong lineage.

Suited for most families, they fit in well with kids. They prefer being active, not surprising when you look at their original purpose. They love hiking and exploring with their pack, but be mindful not to over-exercise when young. Stick to the 5-minute rule when young.

Being a large breed, they are prone to large breed health problems such as hip and elbow dysplasia.

Controlling their environment and ensuring you meet their nutritional requirements can be useful in preventing and managing the condition.

Loyal and loving, this breed is a great companion for active families with young children. They suit experienced handlers, especially those with experience of large breeds and love having a job to do.

It is unclear when this wolf dog puppy first appeared. However, it is not surprising that breeders wanted to mix these two dogs as both breeds are known for their intelligence, loyalty and agility.

The German Shepherd x Husky mix learns very quickly (which means they are highly trainable) so owners will need to keep one step ahead of their dog!

For that reason, this breed is most suited to experienced handlers who understand large dogs.

As both parent breeds are historical workers, this dog comes in very high with their exercise needs.

You will need to walk this dog daily and provide lots of mental stimulation. They also thrive in their own secure yard.

Remember the Husky’s tendency to escape! Ensure you have tall fences and hard surfacing beneath to prevent digging and escaping!

This wolf mix can come in a range of colors from black and tan, to black and silver, black and gray, tri-color or tan and gray. Some may even have the Husky’s blue eyes!

Striking and bold, the German Shepherd Husky Mix is loyal and athletic fitting in well with most families. 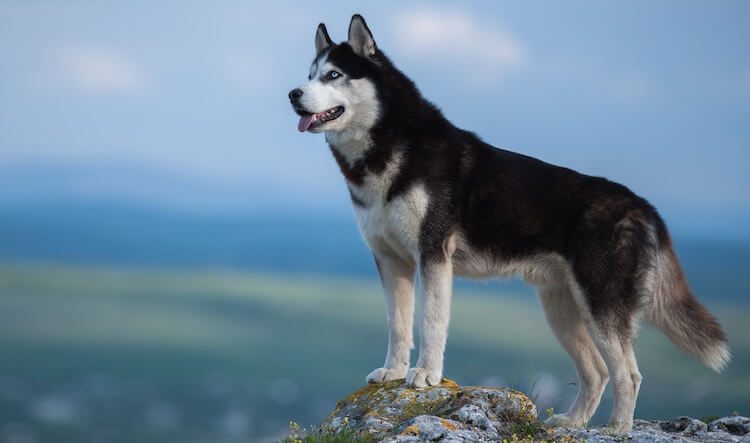 The Husky is a high energy and very intelligent dog. These canines can get bored very easily, so experienced handlers are a must – it’s not enough to simply want a dog who looks like a wolf.

Throughout their history, Huskies were required to work in packs to pull. For that reason, they don’t like being the only dog around.

They are better suited to homes where someone is usually around or something is constantly happening.

If left for long periods of time, like other wolfdogs in this list, they will become distressed and destructive.

Balto is probably the most famous Husky you’ll come across. He led a team of sled-pullers to deliver a diphtheria cure! Huskies are inherent workers and are an incredible breed.

As puppies they are adorable bundles of fluff with their blue mesmerizing eyes.

They grow into impressive, lean and mischievous adults.

Fatigue proof (remember they were used to mushing), the Siberian Husky will certainly keep any family busy, but he must have company and be given a job to do.

The Utonagan is a wolf mix between a German Shepherd, Siberian Husky and Malamute.

A relatively new breed, he has only been known since the 1980s and is a spitz type dog, who was bred to pull-sleds.

Their lean, muscular body offers speed and agility to carry weight over long distances. Their relentless energy and temperament gave them stamina and endurance for those harsh conditions.

Wolfdogs are historic workers. To bring them into an apartment simply isn’t fair. They need active families, with large homes and space to roam securely.

They are quite independent and quick thinking, but they are used to being in a pack so they do not tolerate being left alone. Although, gentle in temperament, this canine needs an experienced handler. 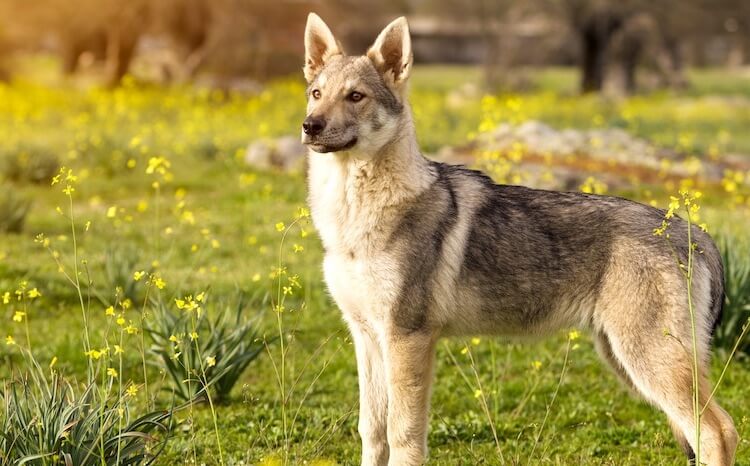 Originating from mating a German Shepherd with a Eurasian Grey Wolf, the Saarloos originated from a Dutch Breeder.

He considered the typical German Shepherd had become too domesticated and wanted some more primal traitss.

The Dutch Kennel Club recognized the Saarloos Wolfdog as a breed in 1975.

DNA tests have shown that the Saarloos has a closer association with the Grey Wolf than any other breed of dog. There is a clear division between this wolf dog and all other breeds.

Because of their clear distinction from other breeds, they are most commonly seen in the grey color, like their wolf ancestor.

Despite their strong muscular body, standing between 24-30” in height and weighing up to 100 pounds, they are light on their feet.

They are loyal and devoted, much like the German Shepherd, but can be aloof and reserved like a wolf. They need experienced handlers, who understand their needs.

Not for first time owners, these dogs thrive in active homes with owners who understand large, powerful breeds and the importance of reward-based training along with early and continued socialization.

Whilst these wolf like dogs are super-cute and fluffy as puppies, they grow into energetic, powerful and smart canines.

They all historically had a job to do, and this isn’t something they can forget easily. No matter which wolfdog you choose, they all need regular exercise and mental stimulation.

None of them cope well being left alone for long periods of time so this must be something you consider if you are thinking of adopting one.

Most of them are fatigue-proof so experience of large breeds and knowing how to stay one step ahead is a must! Speak with owners and breeders to see what life is really like with one of these awesome breeds before adopting.