Some people think that the black Pomeranian is an entirely different dog from the Pomeranian, however they are actually just a rare coloration of the same breed.

This small, fluffy, and lovable jet black canine is a companion pooch who can be trained to do multiple sports and become a watch dog.

Black Poms, as some people call them, are known for their: long jet black fur, extremely energetic nature, and loving temperament towards their families.

This pooch gets along well with families that have older children and plenty of time to spend grooming and training their dog.

These small dogs may only stand seven inches tall, but they pack a lot of energy and charisma into their tiny frames.

Black Pomeranians belong to the toy group and are classified as companion dogs.

They were originally breed for their appearance, as people all over Europe fell in love with their adorable fox-like face and peppy personalities.

Although they started off as companion dogs, their intelligence, eagerness to learn, and high amounts of energy, makes it easy for them to excel in multiple canine sports (such as obedience and agility).

While these tiny dogs weigh only seven pounds, they were originally bred from the much burlier Arctic Spitz.

They were bred to be smaller and less bulky than their Spitz ancestors and are considered the smallest member of the Spitz breed family.

While red or orange are more common colors, the black Pomeranian shares the same history as the rest of the members of this breed.

These small fluffy dogs were first bred in Germany (not Pomerania as their name would suggest).

They soon gained popularity and spread rapidly across Europe, even catching the attention of Queen Victoria.

Her love for the breed pushed her to try and perfect these small pooches, she became a Pomeranian breeder and contributed to the spread of different coat colors; including black Poms.

She redefined the breed standard and reduced the dog’s size from 30 pounds to the lovable 7 pounds they are today.

Because this is an extremely popular and common breed of dog finding a breeder might not be that difficult.

However, it is best to adopt a black Pomeranian from an official breeder on the the AKC Marketplace who is selling a pedigree.

Puppy mill breeders may raise the prices of their puppies, due to their rare coloration, and breed from stock with known health issues (i.e. disregarding Dam welfare).

When you first meet this puppy, you will be able to fit them in the palm of your hand!

Because black is the rarest Pomeranian coat color, a purebred puppy may cost as much as $800 to $2,000 USD.

A Pom litter will only consist of a maximum of five puppies.

In order to have a pure jet black coat, both of the puppy’s parents must also carry the gene.

Since the black gene is recessive, genetic testing may need to be done on both parents to determine the litter’s coat color. Some puppies may seem black, but as they mature lighter patches will appear on their bodies.

The rarity of the black Pom’s coat color will make it difficult to find a pedigree.

Due to their high energy, and spunky temperament, these small puppies may take anywhere from eight months to one year to mature.

By the time they are 8 weeks old, this breed may only weigh 2 pounds; here is a quick summary of their predicated growth during their first year: 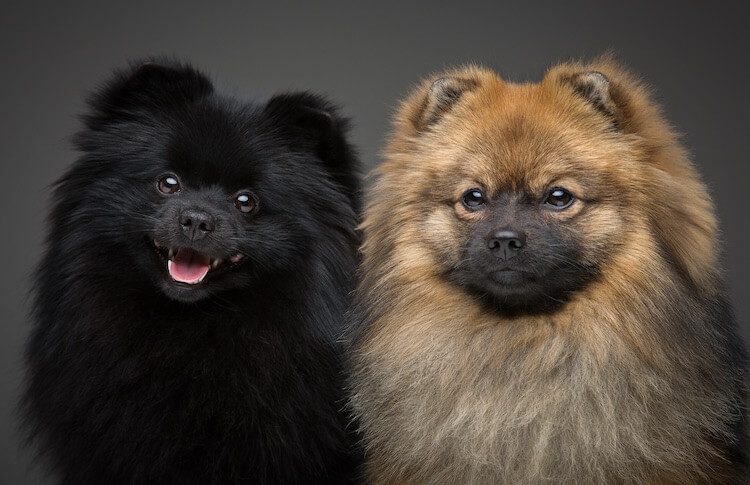 Although Poms are very small dogs, they can sometimes act a lot bigger than they really are. This so called “big dog attitude” can easily be managed with some training and consistency from puppyhood.

Black Pomeranians are sometimes considered yappy pooches, but this is dependent on each dog’s temperament and their initial socialization.

They are known to be suspicious of strangers, especially if they are not properly socialized; this may cause them to bark at strangers or guests.

However, if you socialize a dog at a young age, then this can be managed.

Regardless, this breed is known to be protective of their families and some barking is to be expected, but they are not typically described as aggressive.

Pomeranians typically have a low prey drive and may get along well with other small household pets.

They love being the center of attention, as well as spending lots of time playing with their families.This breed is known for being intelligent, energetic, and very loving towards their families, black Pomeranians are no exception.

Without training, it is possible for these small dogs to be very protective of their owners and weary of strangers.

Due to their low prey drive, these black pooches are known to get along very well with smaller pets, but may need more socialization around bigger animals.

They should cope very well in families with older children, but aren’t the best fit for a family with children under the age of ten.

However, if a family has younger children that are mature enough to distinguish this breed from a stuffed animal they should be fine under supervision. 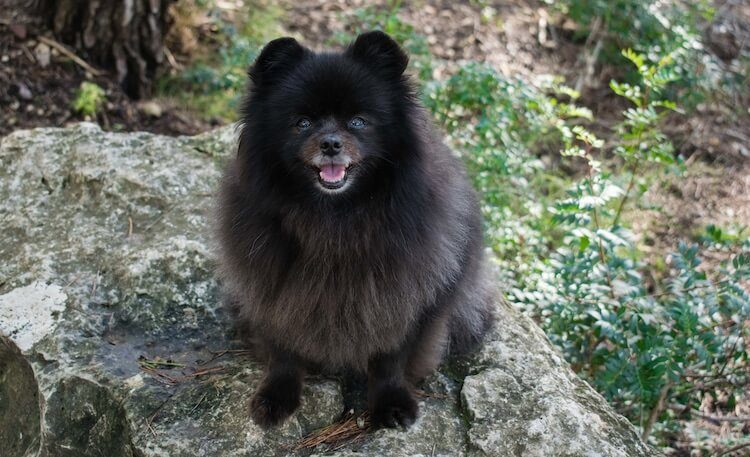 Despite being a fluffy dog, that can cause them to look a little on the larger side, the Pom is actually very thin.

Whilst this breed has a large variety of coat colors, the black Pomeranian’s famously fluffy coat is always jet black.

Some variations of this breed are black and white, or black and tan, however, in order for them to be considered pure, they must be solid jet black with no markings.

The black Pomeranian belongs to the toy group classification and stands at 7 inches tall.

Despite having a large fluffy coat, their bodies are very tiny and slender.

Once fully grown, these small dogs usually only weigh between three to seven pounds.

Black poms are known for being completely black with no other marking.

Whilst some of these dogs may be mostly black (with tan or white markings), they are not considered pure. 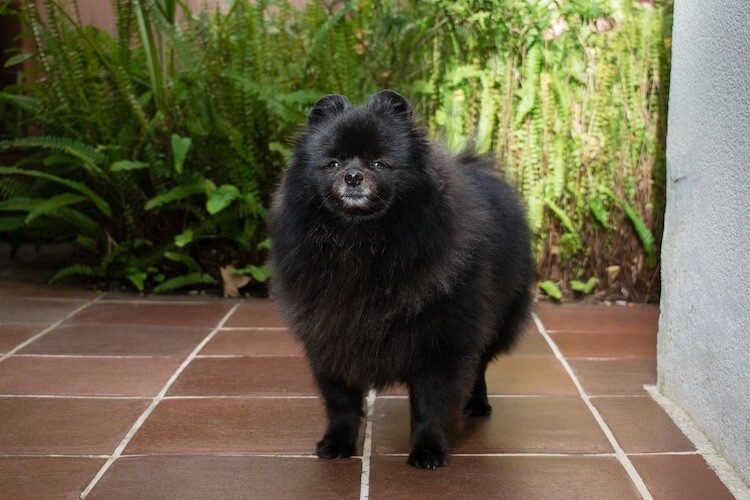 Whilst a black Pomeranian’s straight puffy fur looks extremely soft, the thin hairs actually have somewhat of a harsh texture.

Their coat is extremely thick and consists of the longer outer layer of fur and an extremely soft undercoat.

These fluffy jet black pooches are not known to be extremely heavy shedders, however they are not considered hypoallergenic; so they do shed somewhat.

This breed has a lot of hair (in both their outer layer and undercoat), so in order to keep their fur healthy and matt free, it is best to create a grooming schedule.

You should completely brush out your puppy’s fur at least once a week and take him to a groomer every 4-6 weeks.

While it is possible to groom your black Pomeranian yourself, if you don’t have experience grooming then it might be a better idea to take them to a professional groomer.

Hair cuts usually consist of trims, although some people prefer to shave their Pomeranian (or keep their hair very short) in order to make it easier to manage.

Nails should be trimmed once a week and you should get their teeth cleaned when they get groomed. 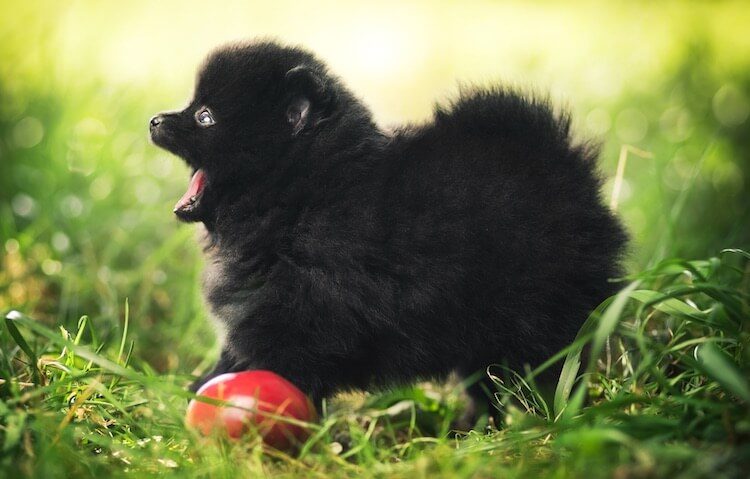 These little dogs are best suited for a family with older children, or seniors with experience training dogs.

The black Pomeranian is a great fit for someone looking for a smaller, high energy companion dog.

Because adult Pomeranians can weigh anywhere from 4-7 pounds, their daily calorie intake is largely dependent on their weight.

Depending on their adult weight, black Pomeranians may need between ¼ to one cup of food a day, it is always best to ask your vet if you’re unsure of how much to feed your puppy:

Whilst they can be fed a raw, dry and wet diet, it is best to feed a high-quality kibble diet; especially if it is formulated for toy dog breeds.

Short 20 to 30 minute walks, with some indoor play throughout the day, is the best form of exercise for this pooch.

Like all dogs with dark coats, the black Pomeranian must be monitored when outside in the sun for long periods of time.

This is because, their dark fur attracts the sun and can cause them to get hot or even overheat much faster than dogs with lighter coat colors.

In addition to being monitored, to prevent overheating, this tiny dog should be watched closely if they are alone outside because they may attract the attention of predators (e.g. hawks, coyotes, and larger species of snakes).

They are also master escape artists and have been known to squeeze through tiny holes in backyard fences or even climb chain link fences. Due to their drive to explore, it would be best to walk your Pom on a leash.

Pomeranians love to run, go on walks, play, and can even be trained to run agility.

Black Pomeranians respond best to positive reinforcement and repetition when it comes to training.

They are known to excel in: agility, obedience, and rally obedience.

This breed is extremely intelligent and loves pleasing their families, because of this they can easily be trained as therapy or service dogs.

Due to their weariness of strangers, the Pomeranian can be trained to be a great watchdog.

Training on a daily basis and on a consistent schedule is the best form of mental stimulation for this breed.

Poms are known to suffer the following health issues, the black Pomeranian is no different:

A black Pomeranian is best suited for families with older children, or seniors with lots of time to spend training and playing with their pooch.

Families who have younger children are not the best fit for this breed.

These small dogs are loving, adventurous, and very outgoing.

They need 20 minute walks plus some extra playtime and time set aside for training.

Do you think one of these fluffy, black pups would make the perfect addition to your family? Let us know in the comments below!

Chug Dog: What It’s Like to Own a Chihuahua Pug Mix

The Chug Dog is a compact, loving, and adorable dog breed. The perfect and lively addition to a small apartment or to a larger family home, they are an ideal companion for any environment. This designer dog is becoming increasingly popular due to its extremely Continue Reading →

The pit bull Chihuahua mix, also known as a chipit, is a cross between an American pit bull terrier and a Chihuahua. This rare breed is intelligent, confident, courageous, and loving. They make the perfect choice for families who want both a small and sturdy Continue Reading →

The Labrabull is an unlikely cross between a Labrador Retriever and an American pit bull terrier. You couldn’t imagine a breed whose parents are known for having completely opposite temperaments. Labradors are known for their friendly, affectionate and eager to please nature whereas the Pitbull Continue Reading → 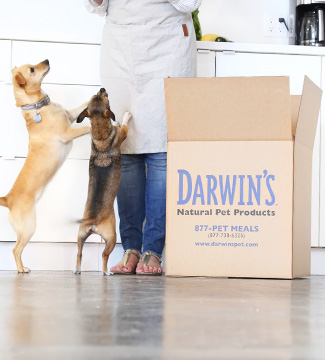