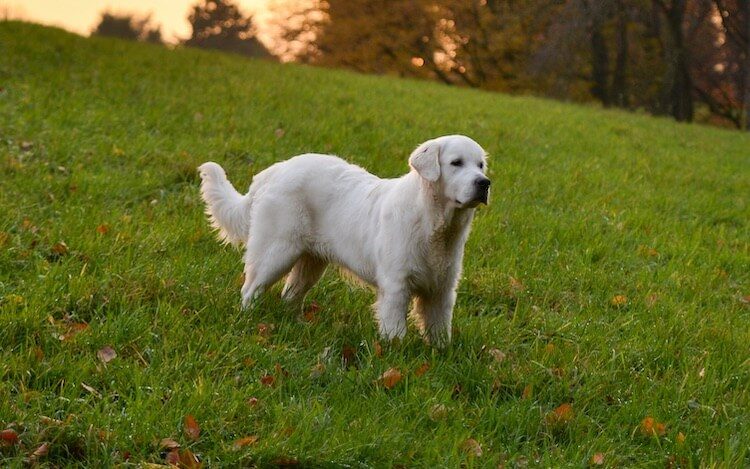 Ranking as the 3rd most popular dog breed in America, it is unsurprising that the Golden Retriever is a dog we all know and love.

However, the English Cream Golden Retriever may not be a breed you are as familiar with:

Not to fear, this article contains a complete guide to the English Cream Golden Retriever, discussing everything from their loving and gentle personalities to what they are like as tiny puppies.

Let’s begin with ten facts you didn’t know about this breed.

Recently, the term English Cream Golden Retriever has been popping up everywhere, but what dog breed are they?

However, this is untrue.

They are not pure white, but instead a pale yellow to cream.

First seen in Scotland, the English Cream Golden Retriever was bred somewhere between 1854 and 1894.

The four puppies were used as gundogs and favored for their “soft mouth” grip.

Their skill of retrieval was unrivaled as they could retrieve both in water and on land.

Over time this breed made its way over to America, the first records show the Golden Retreiver popping up in America in around 1910.

Shortly afterwards, in November 1925 the first Retriever was registered with the American Kennel Club being named the American Golden Retriever. 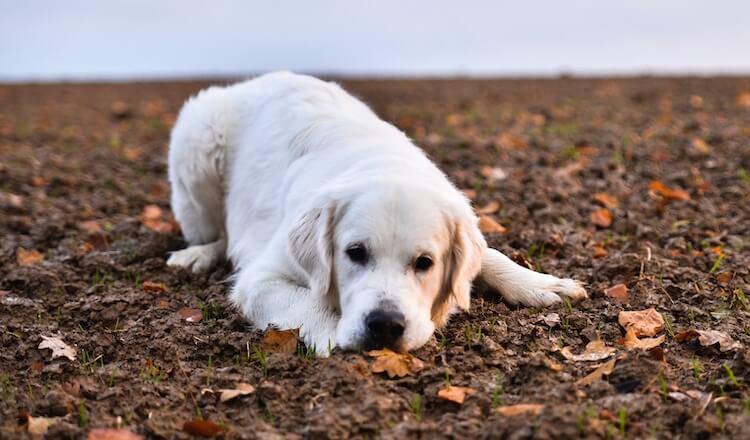 It is important to understand the difference between American, English and Canadian Golden Retrievers.

While they are all descended from the same original bloodline, transatlantic breeding has caused slight variations in the breed and breed standards.

Despite their slightly different appearance, personality variations are uncommon, and all three bloodlines have similar temperaments.

English Cream Golden Retrievers have a broad head and body, but are the smallest of the three.

Standing between 20 and 22 inches, they are easy to spot with their round, dark eyes and generally lighter coats.

4. Cream Is Not An Accepted Breed Color 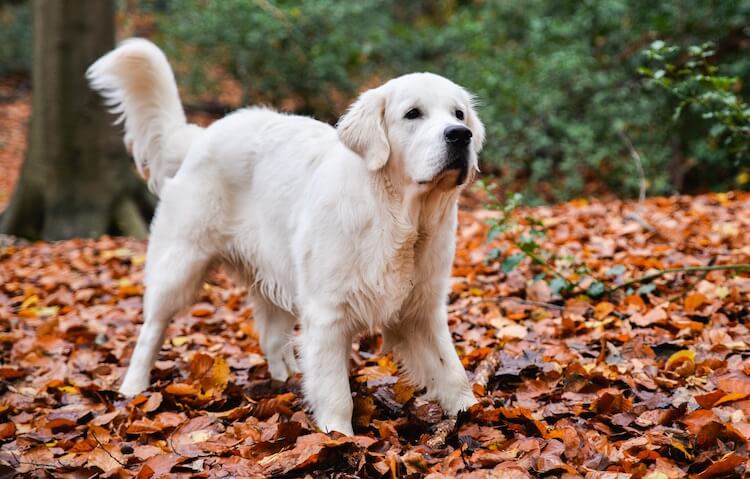 Because of this, potential owners may struggle to find an English Cream Golden Retriever.

When reviewing their breed standard you will notice cream is not an accepted color.

5. They Are Not Healthier Than Golden Retrievers

Some breeders will try and advertise these canines as “healthier” because of their cream color coat.

However, there is no evidence to support this.

Although it is thought to be less common in this breed (when compared with Labrador Retrievers) hip and elbow dysplasia are frequently seen in this pooch.

As with other large dog breeds, hip dysplasia is a developmental condition caused by incorrect formation of the hip joint.

Generally speaking, the condition is genetic, but can also be triggered by obesity at a young age.

In most cases the condition can be managed with pain medication, but in more severe cases hip dysplasia may require surgery to correct.

They are also prone to Osteochondritis Dissecans. This is a condition whereby the cartilage separates from the bone.

It can occur anywhere within the body but is most commonly seen in the elbow, knee, shoulder or hip joints.

Retrievers are also known to have ongoing problems with their eyes and heart.

Conditions such as cataracts are often commonplace in the English Cream Golden Retriever, and although uncommon, it is not unheard of for this breed to develop heart issues such as Cardiomyopathy.

A survey completed in 2004 found that the three most common causes of death for the Golden Retriever were: various types of cancer, heart issues and old age.

Like other types of Retriever, the English Cream Golden Retriever is at his happiest outdoors.

Nothing brings this breed more joy than a game of fetch with their favorite human- except maybe a cuddle at home afterward.

True to their heritage, these guys love to swim and are true waterdogs.

Consequently, owners should try to take these dogs to places where it is safe for them to swim.

On average, this breed needs around two walks each day, 30 minutes each in length. Try to keep these walks varied to keep their interest and prevent them from getting bored.

Although very good natured, like any other breed, they will grow bored if their exercise needs are not met (this can lead to problem behaviors such as destructive behavior and barking). 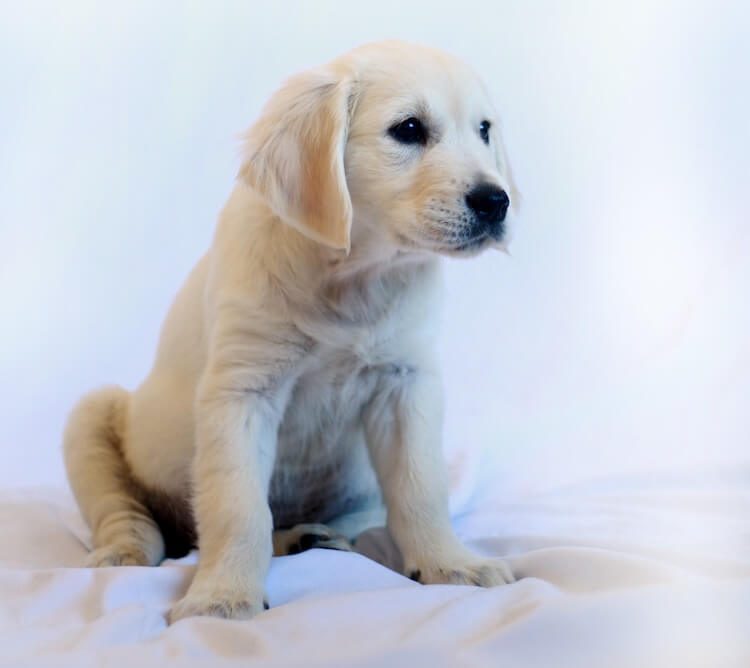 The best way to describe these puppies is cute.

While all puppies tend to be cute, these little white balls of fluff manage to be very cute!

It is not uncommon to find varying shades of pale cream to gold within the same eight puppy litter.

These curious pups love to be out exploring and don’t quite understand the concepts of strangers, just friends they haven’t made yet.

Prospective owners can expect to pay between $1,000 and $3,500 USD for a Golden Retriever puppy of any coat color.

This price can vary depending on pedigree, show status, location and the breeder’s reputation.

Owners may struggle to find a suitable breeder in America. This lack of supply to meet demand, combined with their high price tag, makes this breed a magnet for irresponsible breeders and puppy farms.

Consequently, when shopping for a puppy it is important to be sure you are finding a responsible breeder.

8. They Are Known For Their Heavy Shedding Coat

While this dog has a very mellow and low maintenance personality, the exact opposite is true of their grooming routine.

Goldens are known for their heavy shedding and the English Cream Golden Retriever is no different.

If not brushed regularly enough, their long hair will matt, so it is important to brush them from nose to tail tip at least once a week.

While they shed year-round, they will have two yearly “blow outs” whereby they shed their undercoat and grow in a new seasonal one.

During this time, daily grooming with a shedding brush or glove is necessary to give your furniture any kind of chance and to stop the hair from matting.

These dogs love to play in muddy puddles and roll in the mud so bathing when dirty is the best way to preserve their lighter coats.

However, overbathing is very bad for them and causes skin conditions such as Atopic Dermatitis.

Consequently, owners should only bath when necessary, using a shampoo designed for dogs with sensitive skin.

Ears will need regular checks and cleaning to prevent infection and tooth brushing will also need to occur to keep breath minty fresh!

Nails will need to be clipped to prevent them from getting too long; this should be done by a professional, such as a groomer or veterinarian.

There is not a lot that the English Cream Golden Retriever dog does not enjoy!

Like other Retrievers, these dogs are not fussy in what they eat, preferring instead to gobble up anything they can get their cream-colored paws on!

Whatever owners choose to feed, it should be between 2 and 3 cups (or equivalent) of high quality dog food. This should be split into three or two meals each day (one in the morning and in the evening).

When it comes to treats, try to feed healthier treats such as dog safe fruits and vegetables, as opposed to calorie filled over the counter treats.

This breeds diet works best if you follow the 80/20 rule.

Feeding 80% of your dog’s calories in their main food source and making up the remaining extra 20% with treats.

Some owners recommend feeding bones as a form of dental hygiene.

However, this should be done with caution, only feed thicker bones to avoid splintering, only allow your dog to chew for short periods of time and only ever feed under owner supervision. 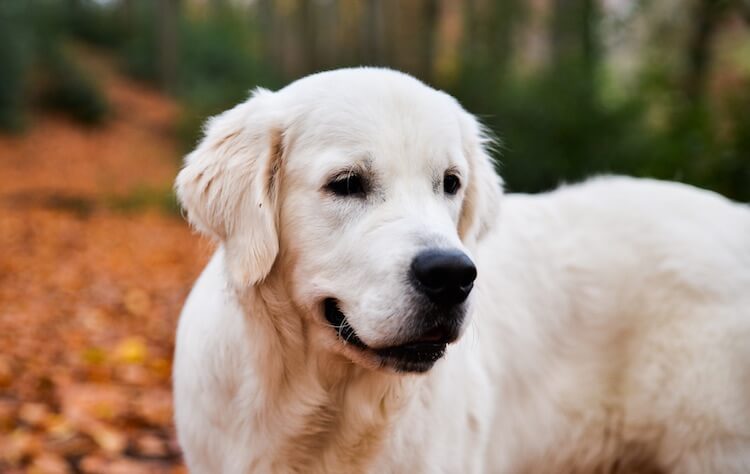 Kind, loving and gentle, these guys are renowned for their patience with children.

Their kind and playful nature makes them a perfect match for young children.

Although they are considered to be a large dog, they are extremely gentle and are not at all accident prone.

This patience and kindness extends to other household pets.

With good socialization, this loving pooch gets on well with all pets, big and small. Even if they are introduced to one another later in life, the English Cream Golden Retriever is very patient and will quickly adapt to their new companion.

Known to be very intelligent and to enjoy games, a bored Retriever is a menace, barking, howling and even destroying furniture.

To stimulate this canine, it may be beneficial to teach your dog tricks, or even enter them in a canine sport.

They naturally want to please, and consequently they make very fast learners.

It is not uncommon to see one of their siblings in an obedience ring, picking up basic and more complicated commands very quickly.

Although that being said, they are known to have a cheeky and mischievous side and occasionally may put their own fun first!

They are slightly different to an American Retriever but have similar genetics and personalities.

Some breeders will try to charge more for puppies, saying that they are healthier, but there is very little evidence to support this.

They are kind and loving dogs, with gentle personalities that win over the whole family, making good dogs for people of all ages, looking for an active dog who loves to play with their closest human companions.

Do you have an English Cream Golden Retriever at home? Are you thinking of getting one? Leave us a comment down below giving us your thoughts on this excellent breed.

7 Dachshund Mixes: The A to Z Of Adorable & Cute Weiner Mix Breeds

Purebred Dachshund dogs have been a firm family favorite in America for 20 years. They currently rank in the top 15 American Kennel Club registrations! This comes as no surprise to fans of the breed, their tenacious and loving personalities combined with their short legs Continue Reading →

19 Terrier Mixes: The Complete A to Z List Of Types of Terriers

Most Terrier breeds have been bred for centuries across England and Scotland. These dogs were refined over decades from working canines to excellent working family pets, although it is still possible to find working bloodlines. Bred to hunt vermin such as rats on small holdings, Continue Reading →

121 Husky Names – Choose The Perfect Name For Your Husky

9 Cute Facts You Didn’t Know About The Australian Shepherd

1001 Of The Most Popular Girl Dog Names