Golden Retrievers and Labradors are both extremely loving dogs who share many similarities. Both are great with children, have a sweet nature and are extremely loyal family pets.

It is no wonder why many people have a difficult time choosing between the breeds.

Generally when comparing a Golden Retriever vs Labrador, Goldens are more adaptable to a sedentary lifestyle and Labradors have high energy reserves. Golden Retrievers also have a long coat, which means more grooming whereas a Labrador’s bouncy nature makes them more boisterous.

However there are many subtle differences that may sway your final decision.

Golden Retriever vs Labrador – What Is The Difference?

When comparing the size difference of a Golden Retriever vs Labrador you will notice Goldens are slightly smaller on average.

Both breeds are recognized as being medium sized, however if you measure a Golden vs Lab you will notice the Golden Retriever is an inch shorter.

You can see the slight size variation in the table below which shows the average height and weight of both breeds:

Female Golden Retrievers stand at 21 to 22 inches compared to female Labradors with a height of 21.5 to 23.5 inches.

Male Goldens are slightly larger and stands at 22 to 24 inches in height compared to a male Lab standing at 22.5 to 24.5 inches.

Male Golden Retrievers are slightly lighter at 66 to 75 pounds vs the male Labrador Retriever at 64 pounds to 80 pounds.

This is especially true for the English Labrador who are stockier and less athletic than the American Lab.

2. Golden Retrievers Are From Scotland vs. Labs From Canada

The Golden Retriever originated in Glen Affric, Scotland in the 1800s. Lord Tweedmouth mated a wavy coated Retriever with a Tweed Water Spaniel.

The Labrador Retriever originated 4,000 miles away from Scotland in Newfoundland, Canada.

Canadians selectively bred the Newfoundland breed with smaller water dogs to create a St. Johns Water Dogs. The St. Johns Water Dog was then imported to England and used as retrievers in shooting sports. After arriving in England the breed officially became known as a Labrador Retriever.

The Golden Retriever and Labrador are among the most popular dog breeds listed by the American Kennel Club.

Goldens are ranked the 3rd most popular breed and Labs are first.

The Golden Retrievers popularity sky rocketed to 3rd after the movie Air Bud.

Labrador Retrievers have been the most popular dog breed in America for over 20 years.

Both retrievers are loved for their gentle nature which is why they are used as therapy and working dogs.

4. They Were Bred For Different Jobs

The differences between the purpose of the Golden Retriever vs Labrador are subtle now because they both have similar jobs, however, historically they had very different jobs!

Both breeds were bred for their loyalty, intelligence, swimming abilities, and soft-mouths:

Golden Retrievers were originally bred to retrieve shot waterfowl (such as ducks) during a gentleman’s hunt. They were the perfect sporting companion for wealthy owners who enjoyed game hunting.

Unlike the Golden, the Labrador Retriever’s first job was to retrieve nets, ropes and fish for fishermen.

It wasn’t until after the St. Johns Water Dog was imported to England that aristocrats admired their loyalty, work ethic and love of water. After they arrived in England, Labradors were then bred to be sporting companions whose duty was to retrieve shot waterfowl (just like the Golden’s original job).

At this point, both breeds became popular companions for shooting sports.

5. Labs Can Be Yellow, Black and Chocolate. Goldens Can Only Be Gold!

It is a common misconception that Labradors can be golden in color. In fact, if you ever do cross paths with a golden colored Retriever then it is probably a Goldador (Golden Retriever x Labrador Mix).

The color of Golden Retriever vs Labrador dogs is one of the major differences.

Labrador Retrievers can also come in a red or silver. However, these two colors are not officially recognized.

The Golden Retriever has a very long coat that can be either wavy or straight. The Labrador has a short, smooth and straight coat.

Goldens have a very long coat when compared to the Labrador Retriever.

A Golden Retriever is best suited to a family who have plenty of time for grooming! The Golden also has furry feather-like fur around their body. These areas are extra fluffy and include their ears, neck, paws and tail.

They both have a dense, double coat that makes their coat specialized for swimming.

Their outer coat is water-repellent and they have a thick undercoat to protect them from debris.

Both dogs are not a good choice for anyone looking for a hypoallergenic dog.

When comparing a Golden Retriever vs Labrador the Golden is known to have significantly higher grooming requirements.

Due to their double coats, both dogs will need brushing but Goldens should be brushed daily and Labs every few days.

However, the Labrador sheds just as much fur as a Golden.

This is especially true during late autumn and spring when their coats are preparing for either cooler or warmer temperatures.

Owners often trim the Golden Retriever’s longer fur near the ears, neck, paws and tail. Labradors do not have any areas with longer sections of fur that require trimming.

Both breeds are similar with their teeth, nail and ear grooming requirements.

With both dogs, it is important to begin grooming from a young age so that they grow accustomed to it.

The Labrador Retriever is a lower maintenance breed when it comes to grooming. 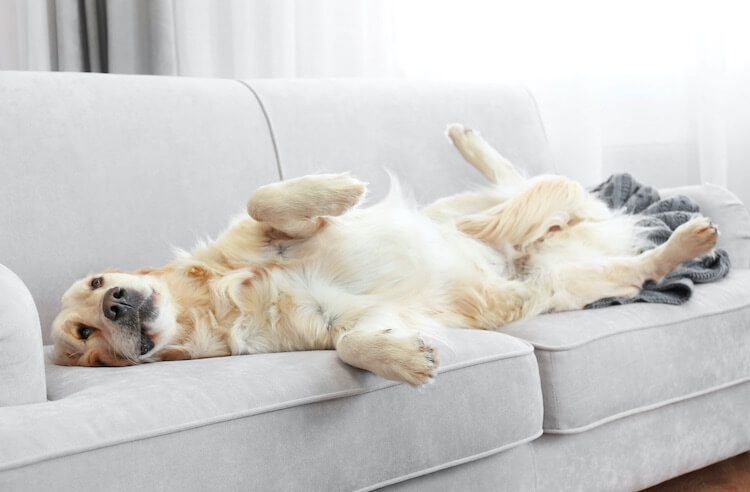 Both breeds are friendly, affectionate and loyal dogs. They are both very sociable and have wonderful temperaments.

It is not by chance that they are America’s most popular family pets.

When comparing a Golden Retriever vs Labrador, the Golden is a gentler, more patient and sensitive dog.

Golden Retrievers have a gentle nature that shines throughout their interaction with young children. They are very careful and soft.

Labrador Retrievers are also great with children but they are typically more excitable and bouncy.

The Golden Retriever enjoys a calm and quiet environment. Whereas Labradors do not tire out easily and are always ready to play as soon as you are!

Labradors are not known to be sensitive. 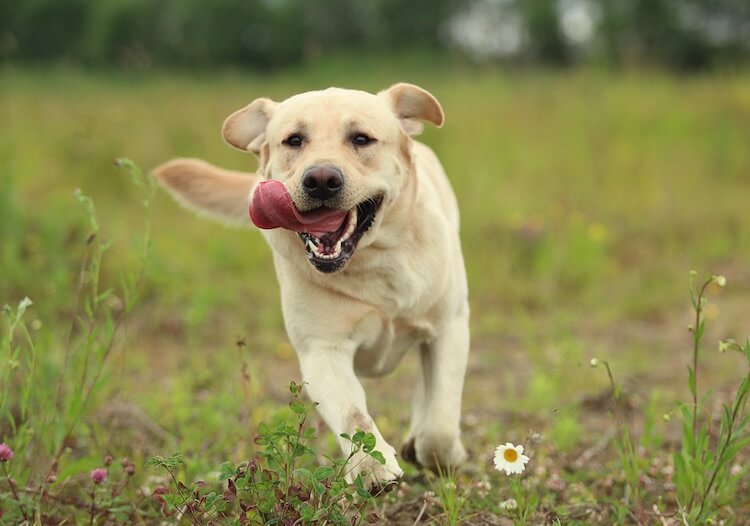 If you are looking for a dog that loves to get outside and join you for a run, walk or adventure then both breeds are perfect.

Both dogs are active and love to have a job to do.

However, the energy levels of a Labrador vs Golden Retriever are very different.

Golden Retrievers are an active breed, but they do enjoy a calm and quiet environment. Their tranquil nature allows them to fit into a large variety of homes easily.

Unlike a Golden, the Lab is not suited for a sedentary lifestyle.

Their high energy levels may be a bit too much for seniors to keep up.

Labradors are a bundle of energy. From puppy to adulthood Labs have high energy levels and are very playful. Once they reach maturity, at approximately 18 months of age, they settle down a bit more. However, when comparing them to Golden Retrievers, Labradors are still very high energy!

The Labrador fits well into a lively and busy home. They love having children, a family to play with, and joining all of their adventures.

The Golden Retriever and the Labrador are both healthy dogs.

Both dogs are genetically predisposed to health issues that can be discovered with routine elbow and hip scoring and eye tests.

But Golden Retrievers and Labradors suffer from different diseases…

Unfortunately, this breed is at risk of developing cancer.

Statistically, 61% of Golden Retrievers experience cancer. This is one of the highest percentages of any dog breed.

It is not yet fully understood which specific genes are leading to the inheritance of cancer-risk genes.

This makes it a disease that neither the breeder nor owner can control.

It is not guaranteed that they will develop cancer over their lifetime. They are just genetically predisposed to receiving genes that may mutate.

Any Lab owner will tell you just how food orientated this breed is.

They LOVE to eat.

Unfortunately, their love of food can cause many health issues.

The Labrador Retriever is genetically prone to obesity.

This genetic mutation is only common in Labradors and is not found in other dog breeds.

Which Breed Is Healthier?

The Labrador Retriever is a healthier breed because of genetic testing.

Most health issues can be avoided in Labs through genetic testing, weight management and exercise.

However, there is currently no genetic testing available to assess a Golden Retriever’s predisposition to cancer.

Both of these retrievers are fantastic dogs.

Golden Retrievers are ranked 3rd and Labradors have been the most popular dog breed for the last 20 years. They are admired worldwide due to their sweet temperament, good-nature and wonderful companionship.

The Golden Retriever and Labrador are both very similar, but they also share a few differences.

Labradors are more active with plenty of energy and thrive in a fast-paced, busy family home; they make the perfect addition to any active family.

However, if you are looking for a loving, loyal, and super gentle breed who loves a more sedentary lifestyle, then perhaps the down-to-earth Golden Retriever is the choice for you?

Or perhaps you still can’t decide?

Let us know what you think below.

The French Bulldog is one of the most iconic dog breeds of the 21st century. These brilliant dogs are taking America (and Instagram) by storm; surging in popularity over the past two decades to become the 4th most popular breed in the states. Loved by Continue Reading →