A Mountain Cur isn’t a dog you encounter every day.

Also known as the Mountain Kurr, this is a particularly rare dog, potentially being one of the rarest dog breeds.

This rare dog’s population is on the rise for the first time since the 1930s. But, what is there to know about the Mountain Cur? Where did it come from? Why are they so popular?

If you are thinking about getting this hunting dog or are a recent pet-parent, let’s explore seven facts you need to know about this unique dog breed.

1. Bred and Raised in Mid-East America

A Mountain Cur is a rare type of working dog bred in Mid-East America. Predominantly from Ohio, Kentucky, Virginia and Tennessee.

Like most working dog breeds, it is believed that this dog was bred from dogs brought to America from Europe – however, this is uncertain as this is not documented.

A true symbol of the pioneer movement in America, these dogs settled within the Southern Mountains and were used for protection and hunting.

Owners could eat the animals they caught before selling on their pelts (i.e. fur). They also made excellent guard dogs due to their size and protective nature.

In fact, when settlers would move to set up a new town, they would be sure to take a pregnant Cur with them.

This litter of puppies would then help to protect the town from unfamiliar folk and animals that may pose a threat to the village, as well as helping the villagers hunt animals such as raccoons for their meat and pelts.

As ranches were traded out for city living and men went off to fight in the war, numbers of these dogs dwindled, and the breed was nearly lost – by 1940, this dog was ridiculously rare.

However, a few fans of the breed stepped in and kept the dog breed alive by creating a breeding program.

Interest in the Mountain Cur has boomed in past ten years. With traditionalism starting to make a comeback in America, owners want a reliable dog to help them hunt that still gets on with their families. 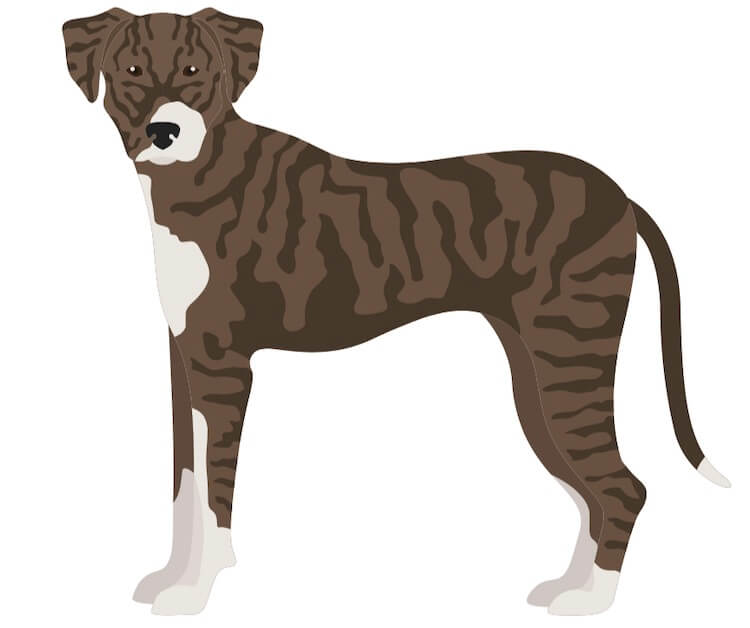 The breed standard for this dog was set in 1956 by four men:

These men are credited for saving this breed from dying out and one year after they created the breed standard they founded the Original Mountain Cur Breeders’ Association in 1957.

Before 1957, there was no recorded history of pedigree for these hunting dogs.

From their breeder’s association, the five original lines originated:

This organisation allowed for breeders to come together to prevent inbreeding.

As a result, this dog breed may be one of the healthiest breed types, but, we will discuss that in more detail later on in this post.

These dogs have been recognised by the United Kennel Club since 1998 and have a very detailed breed standard.

A Mountain Cur should typically:

They were added to the American Kennel Club Foundation Stock Service very recently in May 2017 because of their rare status.

3. A Mountain Cur Can Be: Brindle, Black, Blue, Brown and Yellow

Although the Mountain Cur is often seen in its common brindle pattern, this is not the only colour these dogs come in.

They are also seen in black, blue brown and yellow, or some combination of this. Very often they will have white markings on their face and chest.

They are not to be confused with the Black Mouth Cur, that looks similar with the black melanistic mark on their face.

Despite their multi-coloured coat, these dogs have a relatively simple grooming routine.

They need occasional brushing with a rubber brush to remove all the loose hair from their coat but beyond that they will need for very little grooming.

Their brushing requirements may go up when they shed their summer or winter coats, but beyond this, they will require weekly brushing at most.

A Mountain Cur’s coat is short thick and close fitting, with a rough texture to the touch. These dogs actually have a softer undercoat, creating a double coated dog.

This dog does not need regular bathing as this dries out their skin. If you must bathe them, try using a medicated shampoo or one for sensitive skin.

Unlike a lot of other hound type dogs, these dogs do not drool. This is because the skin around their lips is tighter than that of other similar dog breeds and so they cannot drool.

4. Some Mountain Cur Are Known As Pariah Dogs 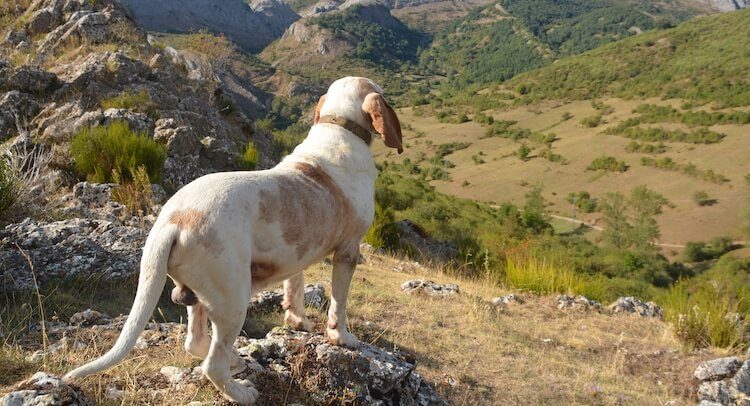 The word cur is actually an old word that refers to a dog of an unknown breed.

They would also be known as pariah dogs.

However, among dog experts and fans, the Cur Dog is actually referring to a hunting dog used for treeing. This term is used exclusively to describe dogs originating in North America.

Consequently, there are 16 different specific treeing curs, the Mountain Cur is just one of them.

All 16 Cur dogs are recognized as individual breeds have their own organisations associated with them.

The Cur is often confused with its close canine relative, the Treeing Tennessee Brindle.

Physically they are both very similar, standing between 17 and 24 inches and have the distinctive brindle coat.

However, Curs are often heavier set and weigh slightly more, weighing between 40 and 60lb as opposed to the Treeing Tennessee Brindle that weighs between 35 and 50lb.

On top of this, Treeing Tennessee Brindles have larger, softer ears and generally much gentler expressions.

What Is a Cur Dog?

Cur type dogs, such as the Mountain Cur, are not to be confused with Feist type dogs – small hunting dogs.

Although both terms refer to North American Treeing dogs, and were used interchangeably, there is now a distinct difference:

5. A Mountain Cur Dog Is An Excellent Sporting Dog

This dog was originally bred to be a working dog and consequently they have an incredible drive to work.

As working dogs, they do not deal well with being bored.

They are not known to sit back on their laurels, but love to learn, understand and solve complex problems very quickly.

A combination of all these factors results in a Mountain Cur that is an excellent match for canine sports.

Due to their treeing history, they make excellent flyball dogs. Their instinct to chase and retrieve will be honed in a game of flyball.

If you aren’t looking for a competitive sporting dog, they also make excellent fetch partners.

With an instinct to chase, this will serve you tremendously well as they will love nothing more than chasing a ball with their best human companion.

6. They Have Their Own Book (Old Yeller)

Although never referred to by breed name, in the book by Frank Gipson, Old Yeller is described as a dog who is able to hunt and tree and is not afraid of large predators.

This is typical of the Mountain Cur’s temperament and consequently it is commonly believed that Mr Gipson was describing this dog breed in Old Yeller.

To understand what he was getting describing, let us look into the personality of this breed a little further.

Mountain Cur’s are an intelligent dog breed, loving nothing more than to work.

They are always looking for a job and consequently do not do very well with being left alone. Leaving this breed for long periods of time with no stimulation can result in destructive behaviour.

Loving nothing more than to please their owners, they are loving dogs, and consequently, are one of the more obedient breeds.

Mountain Cur are very trainable and are known to be very fast learners.

Due to this drive for work and their ability to learn so quickly, it is recommended that they are exclusively owned as working dogs and used as family pets.

They have a mesocephalic skull shape which indicates their ability to recover quickly to surprise events and may enjoy owner directed play.

A Cur tends to be more cooperative with humans than their smaller feist dog cousins. This is reflected in their drive for work.

Ironically, after all of that, the dog in the Disney movie version of Old Yeller used to play the title character is not a Mountain Cur, but a Labrador x Mastiff mix. 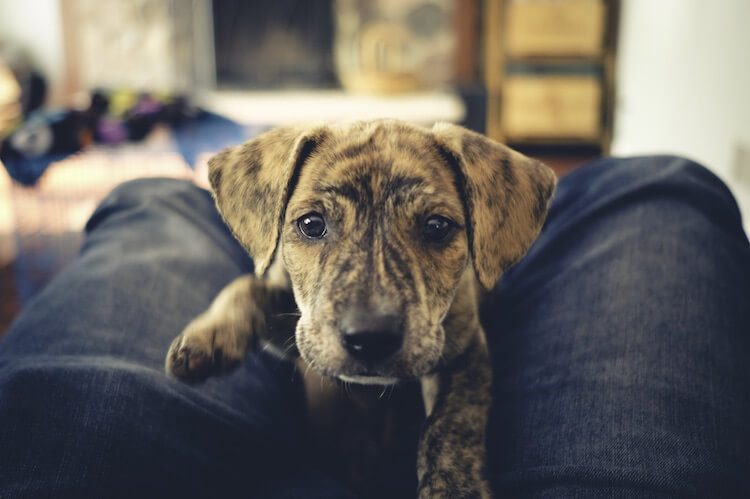 This dog breed is known to be very healthy, due to their breed history. Like other remote dog breeds, they have very little to no inbreeding as a breed type.

Consequently, they are incredibly healthy dogs and don’t suffer from some of the health problems of purebred dogs.

Due to their hunting instincts, they may occasionally be known to chase and/or become aggressive towards other animals.

For example, if not socialized properly as puppies, they may chase other household pets like cats or even young children.

This can result in accidents so be sure to socialize your dog well when young and teach both your pup and children how to play safely with one another.

One of the only concerns is their propensity for deafness. Due to their long floppy ears they can get a build up of wax, mites and bacteria. These can cause infection that ultimately leads to deafness.

The only other concern is the development of skin conditions or allergies. This can be due to excessive bathing or high humidity environments.

Try to limit your dog’s interaction with water to the absolute minimum to prevent these conditions from occurring (if your dog must get wet, make sure they are completely dry afterwards).

As with any domestic pet, life length will depend on lifestyle, diet choices and genetics. However, on average, a Mountain Cur has a lifespan of around 16 years of age.

If you’re now sold on the Mountain Cur and can’t wait to get your hands on one, try looking on the AKCs recommended breeder page for breeders near you.

The UKC also has a list of registered breeders, but these are not vetted before they are allowed to register.

If you are thinking about getting one of these dogs? Remember that they require a lot of mental and physical attention and stimulation.

These dogs need constant access to the outdoors to burn off their unrelenting energy, and as a result they are not suited to city living.

Due to their hunting origins, make sure they are well socialized with children and other household pets.

They are working dogs at heart and anything less than this will result in an unhappy puppy. Do you own a Mountain Cur? Feel free to leave us a comment about these active dogs.

Beagle mixes are an ever-popular hybrid who are known for their energy and enthusiasm for life, making them a family favorite. Traceable as far back to 16th century England, this breed was first used for hunting rabbits and other small animals. Often seen in packs, Continue Reading →

The Peekapoo is not a purebred dog. It is a designer cross between a Pekingese and a Miniature or Toy Poodle. Like it’s Pekingese parent, it can be friendly and affectionate, and like it’s Poodle parent, it’s intelligent and hypoallergenic. This designer dog was bred Continue Reading →

A hybrid of two historic fighting dogs, the Pitbull Boxer Mix is also known as a Bullboxer. The Pitbull was used in blood sports and original Boxers were known as bull biters. However, what we actually get when we cross these intelligent and eager to Continue Reading →

Black Pomeranian: A Complete Guide To The Jet Black Pom

Pitbull Lab Mix: What To Know Before Buying A Labrabull