Originally from Texas, the Texas Heeler, is stealing the hearts of thousands of families and people across America.

This dog has a stable temperament, great intelligence, working pedigree and a beautiful appearance!

Highly adaptable, this dog adjusts well in many different environments, making them an excellent family pet and working dog.

Since the release of Far Cry 5 (in 2018), which featured a Texas Heeler named Boomer, interest in this breed has been growing.

What is there to know about this vivacious crossbreed? Here are 14 must know facts about them.

1. The Texas Heeler Is Not A Purebred Dog 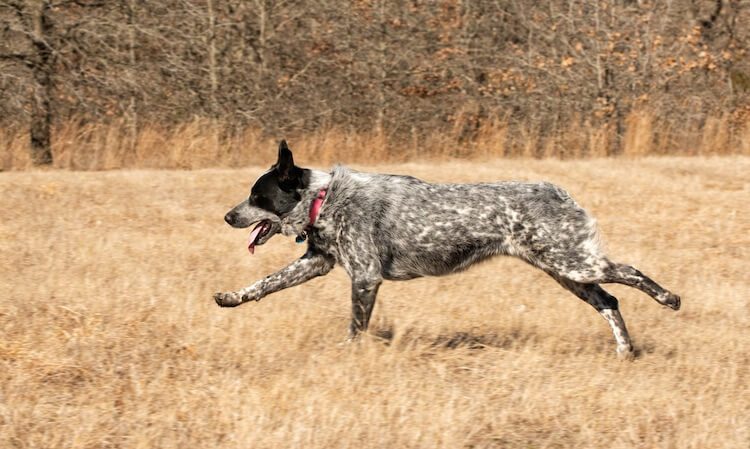 Their unusual name comes from their origin and the Australian Cattle Dog’s nickname (Heeler).

The Heeler nickname comes from their tendency to nip at the cattle’s heels to encourage the direction of their movement as they herd them.

Regardless of which Australian Cattle dog is mated with an Australian Shepherd, both are a Texas Heeler!

2. The Appearance Of A Texas Heeler Is A Lottery

This dog is a medium sized breed, typically the Texas Heeler size is between 17 and 22 inches tall, they can be much lankier than their parent breeds.

More often than not, they have the stature of the Australian Cattle Dog.

Their coats are usually short to medium in length and can be: black, blue merle, red, white or tan.

They generally have upright, pricked ears, but they can be folded like the Australian Shepherd Dog.

Normally, this dog has big eyes and a generally happy expression.

While it is easy to make predictions about their appearance, it is important to note that the appearance of each individual Texas Heeler is something of a lottery.

Due to the parent breeds’ genetics, you may get two dogs which look distinctly different.

3. Genetics Are Important For This Dog

Not only are there two potential variations of one parent breed (Original Cattle Dog or Queensland Heelers), but there are multiple genetic generations of the Texas Heeler:

This is better illustrated in the table below:

As previously stated, genetics is something of a lottery when breeding this dog, for that reason later generations (i.e. F3, F4, F5 etc…) have a more consistent appearance and temperament.

By selectively breeding dogs together that have a good blend of the desired temperament and appearance, this allows you to get a more predictable hybrid.

Consistent breeding, also allows for the dog to develop pedigree status as you need to have four generations of “purebred” parents to be considered a pedigree by any kennel club.

Like most working dogs, the Australian Cattle Dog is known to be aloof and distant, they are not overly affectionate dogs, preferring instead to please their owners through work.

Despite this, they are incredibly loyal dogs, loving nothing more than to be at their owner’s side.

This dog does not do well with children and other non-human animals, as on occasion they may attempt to herd them. They also show other undesirable behaviors when under-stimulated, such as biting, barking and chasing.

The Australian Shepherd, the other half of this hybrid cattle dog, was first bred to heard livestock too (specifically sheep and cattle).

They are loving with their owners but can be shy and aloof with strangers. Despite, this, they love to play, and will happily spend all day in your garden playing fetch.

In fact, Aussie Dogs are often called “Velcro dogs”, as they are happiest by their owners’ side. They do well in families with older children as their playful and excitable nature can lead to accidents as they do not know their own strength.

5. Their Name Is A Match Made In Heaven

The Australian Cattle Dog Was First Called “Heeler” In 19th Century Australia, since then, they have made their way into ranches across the world, including America in the mid-20th Century.

Often nicknamed “The Aussie”, the Australian Shepherd is actually an American dog breed and was first seen in Texas.

Combining these two parents’ names together we get the Texas Heeler.

6. The Texas Heeler Has A Rescue Association 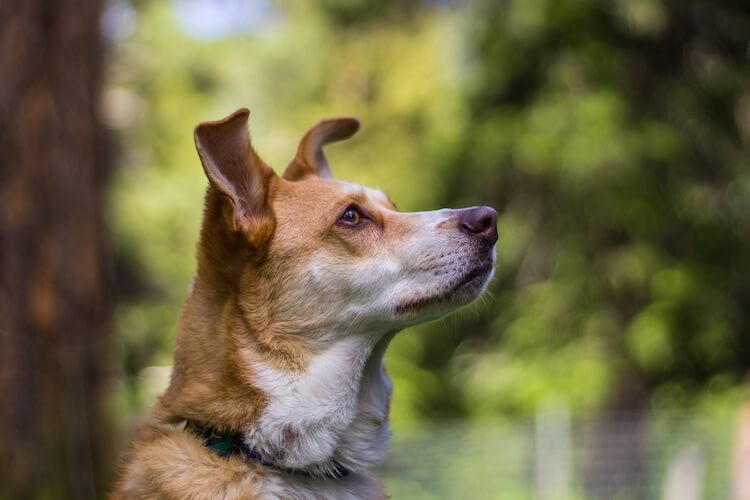 If you are interested in adopting one of these Heeler dogs, but would prefer to rescue rather than buy a puppy, then there are multiple organizations set up to help with this:

Top-Tip
If you are considering adoption, then make sure to read our adoption guide.

7. The Texas Heeler Temperament Is Loyal And Dedicated

Like with their genetic lottery-appearance, it is hard to predict the temperament of a mixed breed dog as it can vary massively from litter to litter. This is one of the reasons why mixed breed and hybrid dogs aren’t recognized by kennel clubs.

In most cases, it comes down to the temperament of the parents.

When looking for a puppy, be sure to observe the mother and her temperament. You should try to do this with the father too (if possible), but in most breeding programs, the father is just a stud so won’t physically be there.

In most instances, the Texas Heeler temperament is loyal and dedicated. They are perfectly designed to work ranches in Western America, their drive to work is at the forefront of their temperament.

They are not known for barking, only barking when they feel threatened. Because of this, they make excellent watchdogs, protecting their families.

Texas Heelers get along well with children, but as with their parents they may show herding behavior with younger children. Consequently, this dog should be kept with children aged ten and up.

This dog does not do well when housed with other non-human pets, as they tend to chase them as they would rogue cattle.

8. The Texas Heeler Has A Low Maintenance Coat 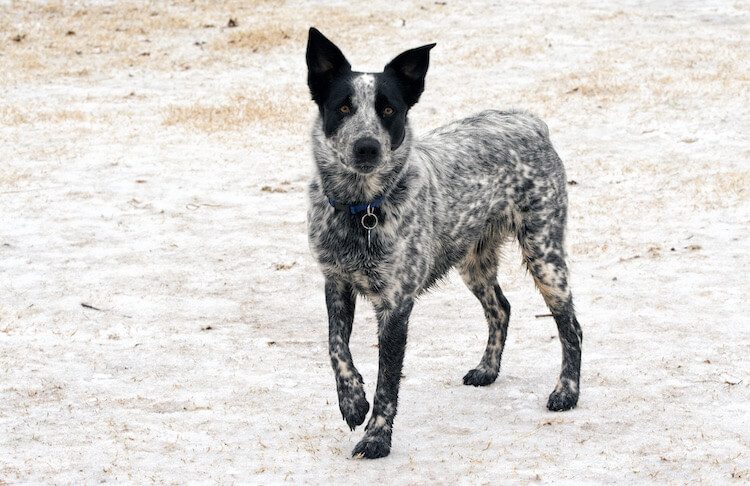 Texas Heelers are known to be very low maintenance dogs when it comes to grooming.

Often, they have short, stiff and straight coats, but they can occasionally be longer and thicker, these shorter coats require weekly brushing and even more infrequent bathing.

Nails will need clipping every few weeks, if they are not being worn down through exercise.

Some of these dogs may be touch sensitive (like their parent cattle dogs), so you should try to establish a grooming routine as early as possible so that he or she knows what to expect.

However, some may be the complete opposite, taking after the Australian Shepherd, and love being touched on their paws and may not require desensitizing.

Regardless, a weekly grooming routine where you brush your dog’s fur and teeth is never a bad idea and helps to build a strong bond between the two of you.

9. This Dog Is Recognized By Three Kennel Clubs

As the Texas Heeler is a crossbreed (i.e. hybrid), it is not recognized by any major Kennel club (e.g. Kennel Club and the American Kennel Club).

It is however, recognized by smaller kennel clubs and associations including:

Despite the breeds popularity, they do not have an official breed club or standard. 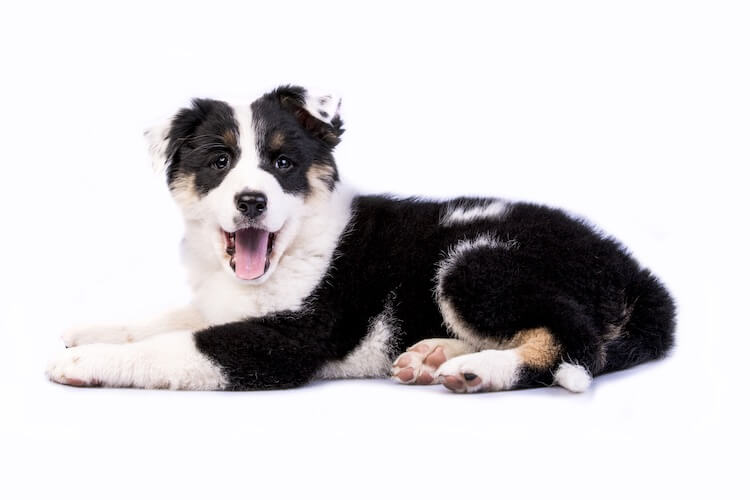 Even among fans of the breed, there is some confusion about names of the Texas Heeler.

As a result of this confusion, it means litters of puppies are often misadvertised as Texas Heelers when they are actually of another breed type.

This is common for dog breeds without official breed clubs or standards as their is no central point of authority on the topic or assured breeders scheme.

With no affiliated or assured breeders scheme, advocated for by an official breed club, to help with the search for Texas Heeler puppies, it can be quite difficult to find one.

Therefore, when looking for a puppy it is important to know what is a Texas Heeler and was isn’t.

Common Misconceptions
Some people believe that the “Queensland Heeler” refers to a Texas Heeler. However, this name refers to a bloodline of Australian Cattle Dogs from Queensland.

There is also some confusion around the terminology “Blue” and “Red” Heeler.

Often, people confuse the terms and think the Blue Heeler refers to a Texas Heeler as they are blue and of the heeler breed type.

However, this is also incorrect, as a Blue Heeler is a nickname given to the Australian Cattle Dog.

Texas Heelers were bred to do a job, they are working dogs; consequently they do not do well with being bored.

The greatest joy in their life is running free and having a purpose. By coincidence, this just happens to be the best form of exercise for these dogs.

They love to run free across fields and forests, channeling their chasing instincts.

Giving this dog a job to do is a good idea, even if that job is something as basic as trick training!

Teach your dog to fetch you items or to clean up their toys, as this will be fun and rewarding.

Hiking is another fun pastime for these dogs. Any individual or family that can take this dog on regular hikes will ensure a great quality of life.

12. They Have Three Major Health Concerns 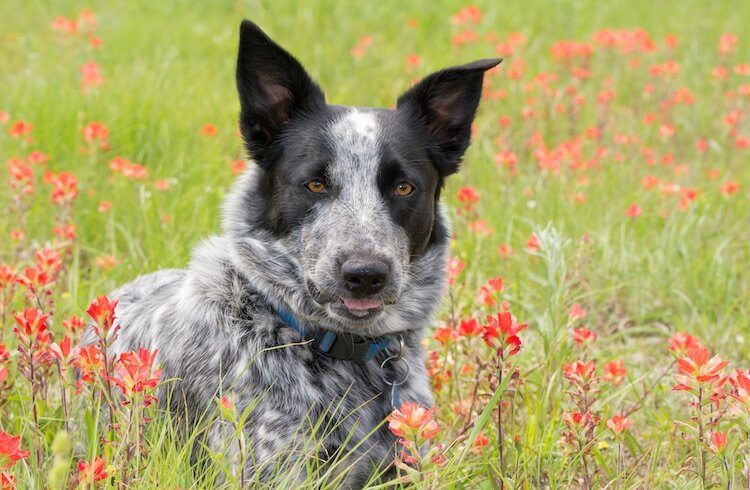 Like all dogs, there is the potential for health issues with this breed, there are three main health concerns to be aware of:

Texas Heelers live long lives, usually living to be between 12 and 15 years. 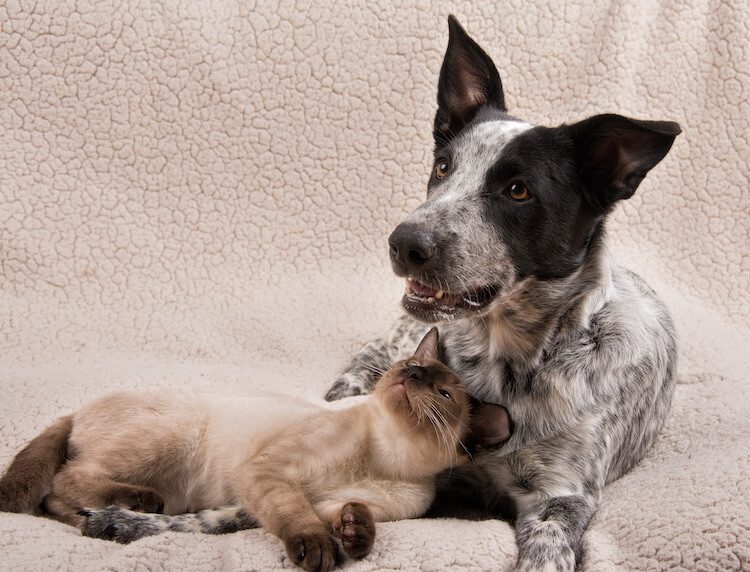 Although the Texas Heeler is a popular hybrid dog, the exact origin of the dog is unknown.

It is thought that the first Texas Heeler was registered to the Dog Registry of America in 1970 by Lucy Guynes.

Since then, over the past 50 years, their popularity has grown exponentially (especially in South West America) due to their skill at cattle herding.

14. They Need a High Protein Diet 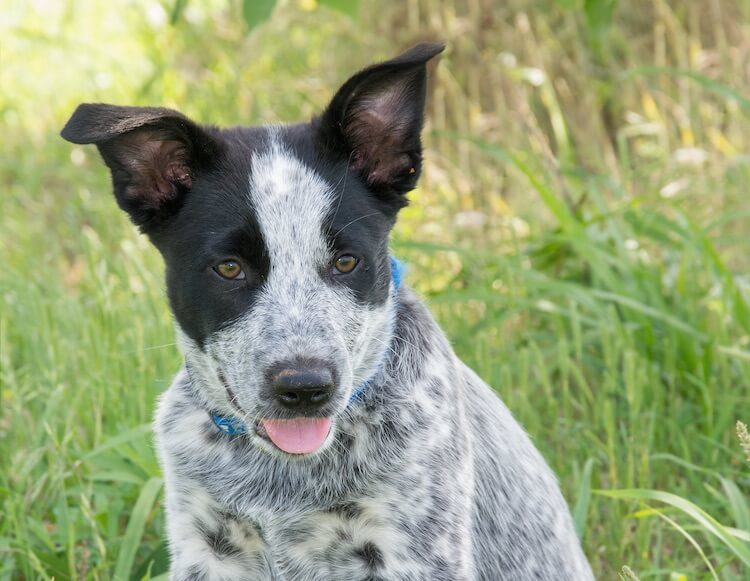 Texas Heelers are known for many things (most of which you have learnt above), but fussy eating isn’t one of them.

They need around three cups of high quality, dog food each day. If possible, try to pick a food specifically tailored for active dogs.

Due to their active nature, they may need a higher energy diet than other dogs.

Their high protein dietary requirements (of around 20%) means whatever they eat, meat should be the primary ingredient.

For this reason, owners may wish to consider feeing their pets raw food, or the BARF diet.

We hope you have enjoyed learning more about the Texas Heeler.

This dog combines the working drive of both breeds, with the loving Australian Shepherd and the enthusiasm with the Australian Cattle Dog.

These dogs should be owned by experienced and active people only, be that a family with older children, singles or couples.

A lack of stimulation, both physical and mental can lead to destructive and undesirable behavior.

This working hybrid remains a firm favorite of many, a loyal working canine companion.

Do you have a Texas Heeler at home? Let us know your thoughts on this breed below.