This crossbreed was first bred between 10 to 20 years ago during the designer breeding craze, and its popularity has been slowly increasing.

Siberian Huskies and Australian Shepherds are ranked the 14th and 15th most popular dogs in America, so it makes sense that their offspring would be a great match.

Independent, intelligent and affectionate, the Australian Shepherd Husky Mix has it all.

These dogs do very well with active families and make good guard dogs. Let’s look at what makes this crossbreed so great in a little more detail…

What Is An Australian Shepherd Husky Mix? 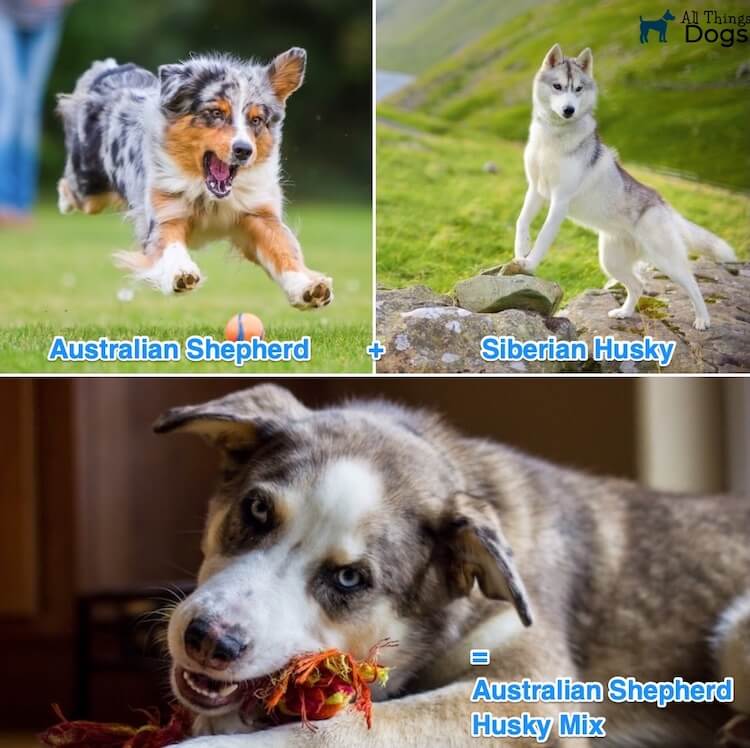 The Australian Shepherd and Husky mix has become increasingly popular since they were first bred in 2004.

Other than the year of breeding, very little is known about their origin, however, their parents have a very well documented history. 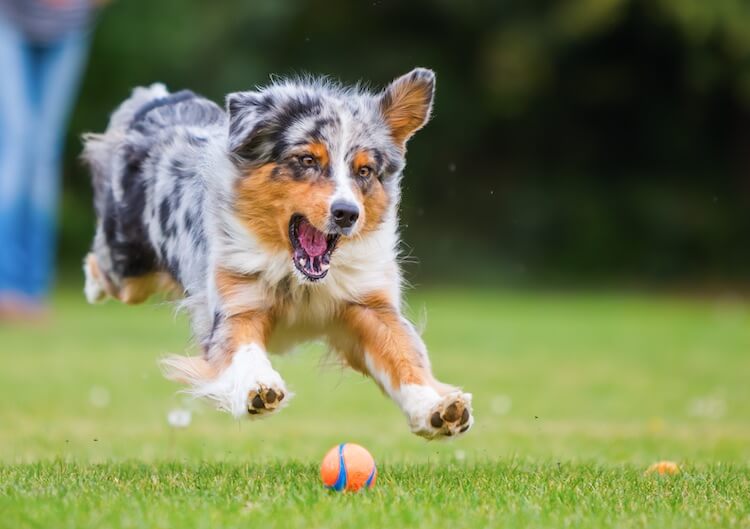 Australian Shepherds, despite their name, were first seen on ranches in America in the 1840s, predominantly in California and Texas.

The name “Australian” comes from the stock used to breed this dog; which came to America via Australia. They are hardworking, active, intelligent dogs who thrive in a busy environment. 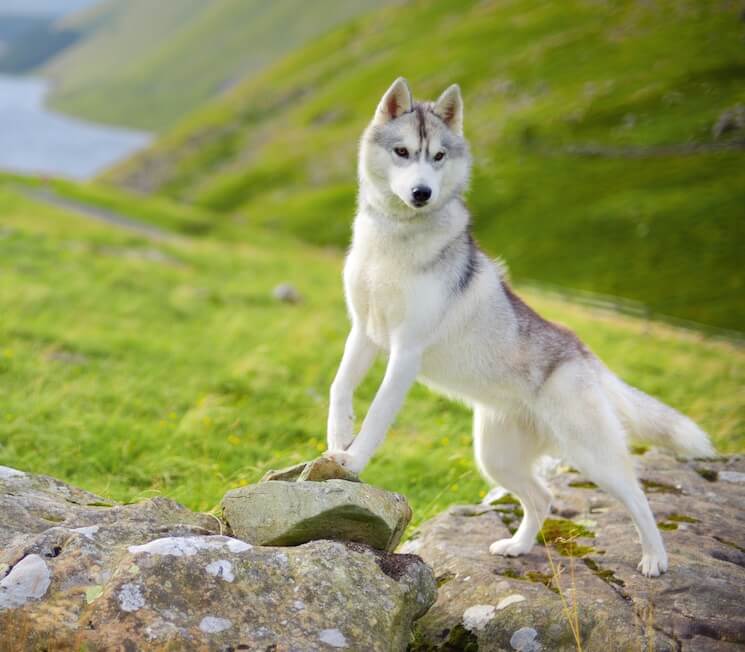 The other parent of the Australian Shepherd Husky Mix is a Siberian Husky; of Asian descent.

They were used by the Chukchi people to transport large loads of cargo over the snow-covered mountains. Their origin date is unknown, but it is believed that the Siberian Husky is one of the oldest dog breeds.

The modern Siberian Husky, while similar to other breeds, has managed to maintain its distinct personality and popularity.

This breed is known for its active and fun nature.

As this dog is a crossbreed it is not recognized by the American Kennel Club.

However, both purebred parent breeds are individually recognized.

The Australian Shepherd Husky Mix is recognized by:

There are no specific breed organizations for this crossbreed, and no specific adoption agencies which have been established.

Don’t let this stop you from trying to rescue one of these amazing breeds, contacting your local shelter is always a good idea as you never know what breeds they have there. 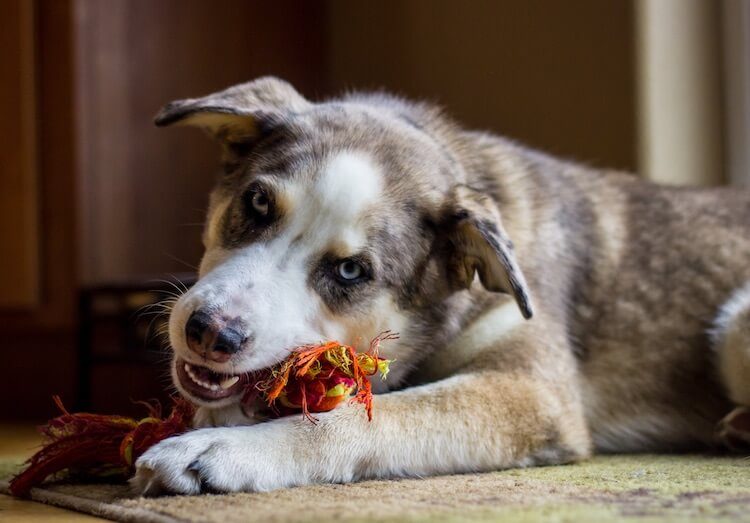 It is important to remember, when purchasing an Australian Shepherd Husky Mix, especially a first generation cross, that it is a genetic lottery.

Both appearance and personality will be undetermined, you could have a dog that is more one breed than the other, you could end up with a perfect cross with a 50/50 mix.

As it is possible for any combination of puppy to appear, it is important to know the parent breeds’ temperament and appearance.

Second and third generation mixes tend to be more reliable and predictable, but it is not uncommon for these litters to be dealt wildcards. 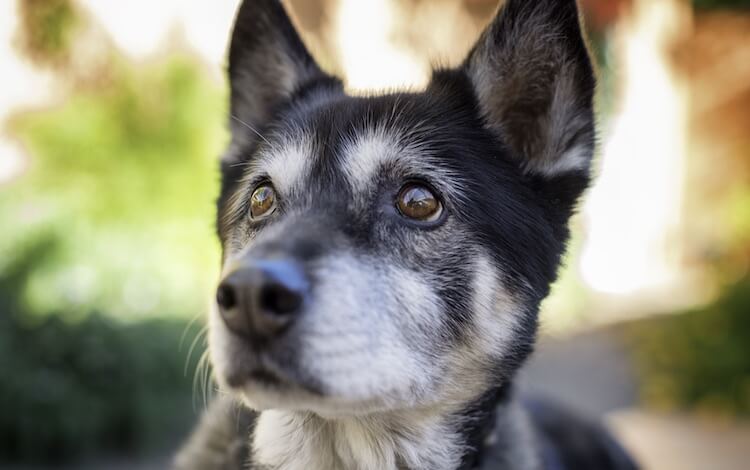 Despite the popularity of their parents, these mixes tend to be in low demand.

Consequently, their prices reflect that, and Australian Shepherd Husky Mix puppies tend to cost between $500 and $1,000 USD.

As both parent breeds are approximately the same size, it varies between breeders which is the mother and father of the litter.

While friendly with their family members, this dog breed tends to be very aloof and reserved with strangers, often going as far as barking at unfamiliar faces.

They can be very good guard dogs with training.

Beyond their guard dog skills, they also make excellent guardians.

They do well with young children and will often chase a ball for hours but are also extremely protective and won’t let anyone they don’t like the look of get too close.

Despite their independence, these dogs are working dogs.

They need to be kept active all the time and if they are not given a job, they will find one for themselves.

Self-assigned jobs are usually the kind that owners don’t like, such as:

The Australian Shepherd Husky Mix is a great match for families!

This breed is active and is best suited to families who enjoy being outdoors.

These dogs are known to get on well with other dogs and pets within households, provided that they are socialized from a young age.

They are not at all territorial unless they feel threatened, but the presence of other household pets will not bother them if it is a daily occurrence.

It should be noted that Australian Shepherds are herding dogs and if under stimulated they may try to herd small children, or even other pets.

This mix has the same traits, consequently, you should make sure they are given enough exercise, both physical and mental. 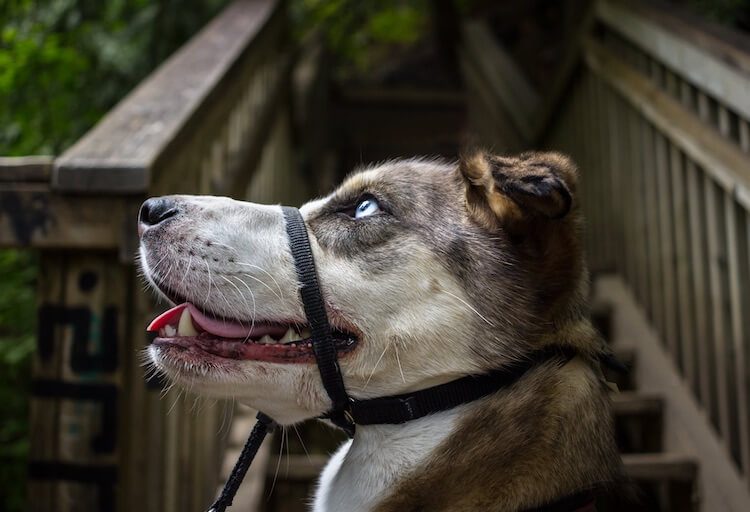 These dogs are known to be very independent.

Like the Australian Shepherd, they can be very aloof too.

This means they are not inclined to be cuddly, instead preferring to do their own thing. If you would like a more affectionate dog, perhaps a Goldendoodle is more for you?

Most owners find their Australian Shepherd Husky Mix prefers to do their own thing.

As these dogs are a mix, it is very difficult to predict their size.

The easiest way to predict the size and shape of this dog is to look at the weight and height of both parent breeds, add them up and divide by two.

If the Australian Shepherd parent is 40lb and the Siberian Husky parent is 60lb, then your Aussie Siberian will be approximately 50lb.

Typically, these dogs weigh between 35 and 65lb and stand between 20 and 23 inches tall.

Again, as these dogs are a crossbreed, it is very difficult to predict their appearance.

These dogs are usually described as “shaggier huskies”, as they tend to keep the Husky physique with the shaggier coat of the Australian Shepherd.

Their eyes are alert and curious, they tend to have an intelligent expression on their faces.

Australian Shepherd and Husky Mixes have triangular shaped ears and stocky bodies. Their bodies are well muscled and solid in build.

Generally speaking, the Australian Shepherd Husky mix has a bi-color coat, usually one color over the face and back, and the other over the chest, stomach and legs.

This crossbreed comes in many colors including:

The coat itself is short to medium in length and very dense.

This breed tends to inherit its parents’ double coat which should not be clipped, but when left to its own devices can become quite wild!

As a result, regular grooming is required (more on that later).

The Australian Shepherd Husky Mix tends to shed lightly throughout the year, and then have two seasonal “blow outs”, where they will shed the majority of their coat very quickly.

These dogs are heavy shedders, and are not suited to those with dog allergies.

Their thick coats shed daily and will need regular grooming (every day if possible).

When grooming, owners should take extra care to check their coat for fleas and ticks as they can get caught in their dog’s fluffy coat!

To avoid any potential dental issues, tooth brushing should be done as frequently as your pet will allow, but ideally every day.

Nail clipping should be done every 4 to 6 weeks by a professional, such as a groomer or veterinarian. 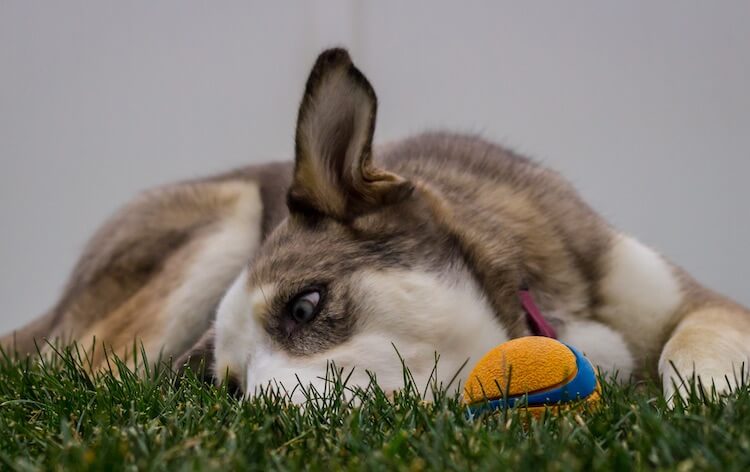 The Australian Shepherd Husky Mix is best suited to an active family who have owned dogs before and have the relevant handler experience.

They do well with large open spaces, so having a large yard, where your dog can self-exercise, is very beneficial.

The Australian Shepherd Husky Mix is a very food oriented dog so mealtimes may be their favorite part of day!

As canine obesity is a growing problem in America, try to feed your dog tasty but healthy snacks, such as dog safe vegetables or fruits.

This mixed breed loves to be outdoors.

They are often at their happiest outside in wide open spaces and love to be out lolloping through fields.

Australian Shepherd and Husky Mixes do not do well with being shut inside; access to an outdoor area is always essential.

However, this outdoor area should be as secure as possible, they are known to be mischievous when bored.

Providing dogs of this breed type with lots of daily exercise, not just physical but mental, is a great way to ensure a happy dog and a healthy relationship.

One really great way to do this is to try to take your dog somewhere different every day.

Providing variety in your dogs daily routine can be very beneficial for keeping them active and engaged. 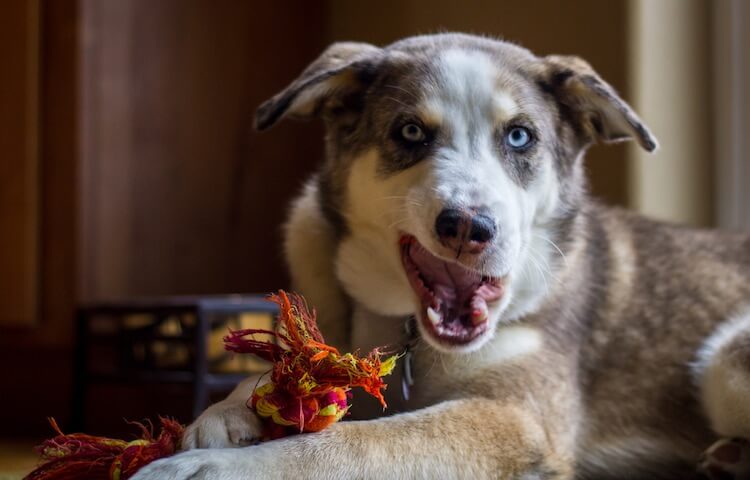 In most cases, the Australian Shepherd and Husky Mix is a very trainable dog.

These dogs have inherited the best people skills and intelligence from their parents; consequently they are very fast learners who master basic obedience with ease.

It is important to note that due to their independent streak they can be somewhat stubborn, especially if they are not in the mood. Potential trainers should try to assess their dog’s mood before a training session.

These dogs are high energy, so try to train after a walk when they are a little more attentive as opposed to hyperactive.

Training them to do jobs around the house is an excellent idea.

Teach them to tidy up their toys and to bring you things on demand. You can also teach them games and puzzles to do while you’re away from the house.

As with all dog breeds, there is potential for the Australian Shepherd Husky Mix to develop some health issues.

The most common two are:

Both of these health issues are seen in the parent breeds.

Hip dysplasia comes from an incorrect formation of the hip joint, causing uncomfortable and even painful movement.

In most cases this is managed with pain medication, but with more severe cases it can be corrected for with surgery.

Although extremely common, it is possible to hip score the parents.

Eye issues may include hereditary cataracts or progressive retinal atrophy.

Like hip dysplasia, it is possible to test for this in parents so where possible insist that breeder’s health check both the parents and the puppies before purchase.

Occasionally this mix may develop epilepsy. This is somewhat rare, but not unheard of, so it is something to be mindful of when adopting one of these dogs.

If you are an outdoorsy family, looking for an active and loving dog, this could be the dog for you!

These dogs are extremely loving and protective, so are a great match for anyone looking for a guard dog too.

They do not do well with being bored, so lots of exercise (both physical and mental) is a definite must if you adopt one of these dogs. So, if you are thinking of purchasing an Australian Shepherd Husky Mix, you will need to be sure that you have the time to dedicate to them.

Do you have an Australian Shepherd Husky Mix at home? Leave us a comment on these awesome dogs!