As far as hybrid dogs are concerned, the German Shepherd Rottweiler Mix is unique as you couldn’t find a mixed breed with two parent breeds so similar.

Both parent breeds are from German heritage, incredibly strong and loyal.

The result is is an impeccable dog, which when socialized and trained from a young age, is a steady, calm and good-natured companion.

He thrives in homes who have experience with large breed owners, who are in complete understanding of what they are letting themselves in for.

Read below to see if you’ve got what it takes to meet the needs of this large and powerful canine. 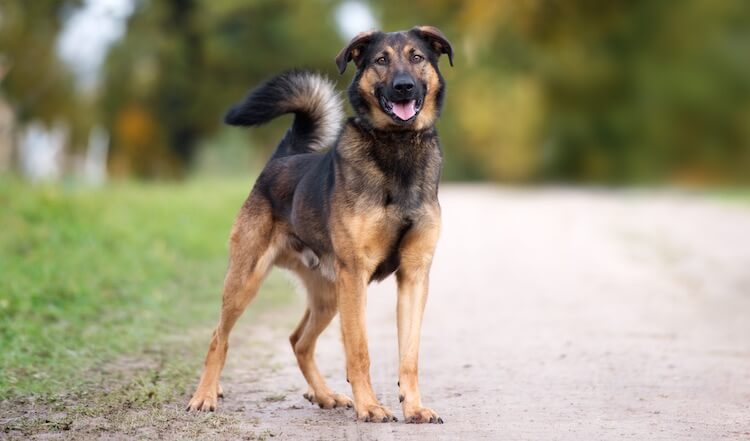 If you are looking for a smart and strong dog, who is loyal and loving, you need look no further.

Being a hybrid, the German Shepherd Rottweiler mix is not recognized by any Kennel Clubs. They are however recognized as a Rottie Shepherd in the Designer Breed Registry.

To help us understand what that means, let’s take a look at the parent breeds. 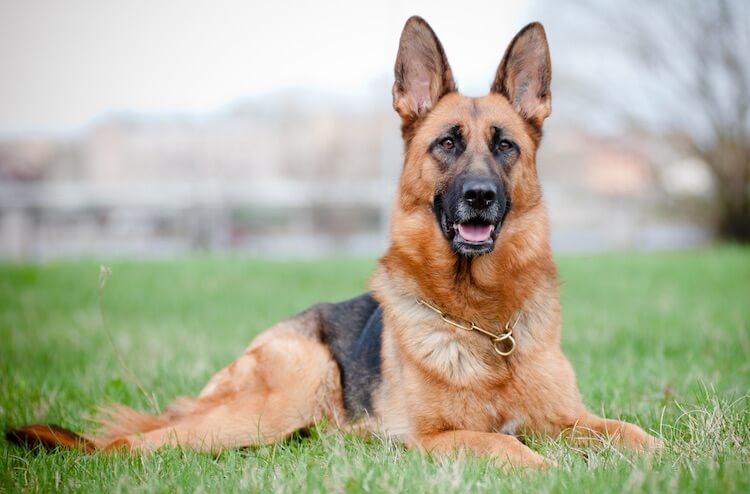 Despite their current military and police work, the German Shepherd originated to herd sheep in Germany. They were bred for intelligence, strength, agility, stealth and an overall air of authority.

The German Shepherd’s popularity increased in the US in the early 1900s, largely thanks to the adventures of Strongheart, and this breed has subsequently been cross-bred to produce many mixed breeds:

Unfortunately, soon after their rise in popularity, came the War and their popularity plummeted due to the German association. After a name change to American Alsatian, and its subsequent return, the German Shepherd is loved again, world over, being the second most popular dog in the US.

They are avid workers, respected for their intelligence and trainability. 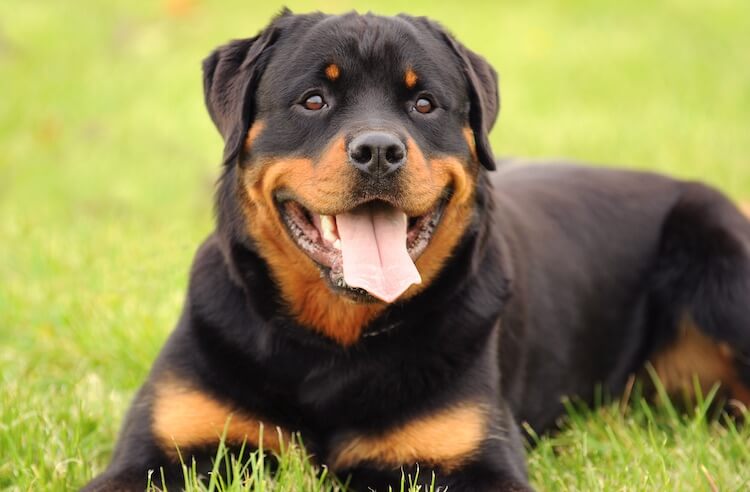 Much like the German Shepherd, the Rottie is adored for its intelligence and trainability too; another fastidious worker.

Originating in Germany, they were strong drover dogs. Their livestock careers soon ended with the advent of railroad cattle cars, but their versatility was noted. Since the early 1900s, Rotties have been solid workers; guide dogs for the blind, protectors, guard dogs and more recently search and rescue dogs in many disasters.

They have even made it as therapy dogs.

Both the German Shepherd and Rottweiler have a bad reputation for aggression, but, most miss the point here. Both breeds are very trainable and will do whatever you ask them to; it’s why the police and military like them, they can demonstrate aggression on command.

A well socialized, and well-trained, German Shepherd or Rottweiler can be the gentlest and most even-tempered dog.

When looking for a German Shepherd x Rottweiler Mix Puppy, source a reputable breeder. For one of these balls of fluff you can expect to pay anywhere between $250 – $850 USD.

The price will largely reflect the parent’s history (i.e. pedigree) and the type of breeder.

Due to the size similarities of the parents, the sire and dam (i.e. mother and father) can be interchangeable and the litter size is on average, around 8 puppies.

Most Shepherd x Rottweiler puppies will have floppy ears.

If they have inherited more Shepherd than Rottweiler, you may find they become pointy as they mature, some even have one pop up before the other – most Shepherd owners will remember that moment in their puppy’s life.

As they are classed as a medium-large breed, your mix will be fully matured between 18 months and 2 years of age.

For experienced large breed owners, this mix is a firm contender because of their loyal and loving temperament.

With both parents being similar in character, they will certainly have a strong personality, but be mindful, as it’s a hybrid, you can never be 100% certain which qualities or characteristics your dog will inherit, so adaptable owners are a must.

In general, when from a reputable breeder, and providing they have early and on-going socialization and training, the German Shepherd Rottweiler mix is intelligent, energetic, loyal and loving.

They are suited to all families, providing they have experience of smart and strong dogs.

This hybrid can be territorial, but, nothing some focused training can’t handle.

You may notice that they are sometimes aloof, but, this is more a reflection of their historic role as a guard dog.

When raised alongside them, this mixed breed dog is tolerant of all others: kids, adults and pets in the home. Don’t bank on any small furries being safe in your garden though; those squirrels are a huge threat to home security!

Their working lines means they are quite high in energy, however, once they’ve hit their daily quota for exercise and stimulation, they love nothing more than relaxing… both parents are known for their silly yoga poses, so this mix will be no different.

A stable all-rounder; this mix sounds a perfect companion? But, he’s not gotten there by chance, they take a fair amount of caring for.

How to Care for a German Shepherd Rottweiler Mix

Make sure you read the label on pet food to make sure it has the correct amount of protein and fats and isn’t too high in carbohydrates.

As a puppy, because of their fast growth and high feed requirements, you will likely feed 4 meals per day – this is to avoid over-stretching his stomach.

When he grows, this will reduce, but maintain at least 2 meals per day for the duration of his life.

Because he is a large breed, he is at risk of bloat. This is where the stomach fills with gas and twists. It is usually fatal. It has been suggested that small but frequent meals reduce the chances of developing bloat.

With both parents being historic workers, it is hardly surprising that this mix is high in energy.

They love being busy and it is recommend they exercise for between 60 – 120 minutes per day to maintain their shape and keep their minds active.

Their trainability means that recall is often easy to teach, but, you’d be safer walking your dog on leash. Some states and counties have restrictions relating to Rottweilers, and this would include Rottie Mixes so check the legal status in your area.

Make sure you follow the 5 minute rule as a puppy.

Keep to 5 minutes of exercise per month of age to avoid any skeletal damage from over-exercising. Keep him from going up and down stairs or jumping in and out of cars until he’s fully matured.

How to Train a German Shepherd Rottweiler Mix 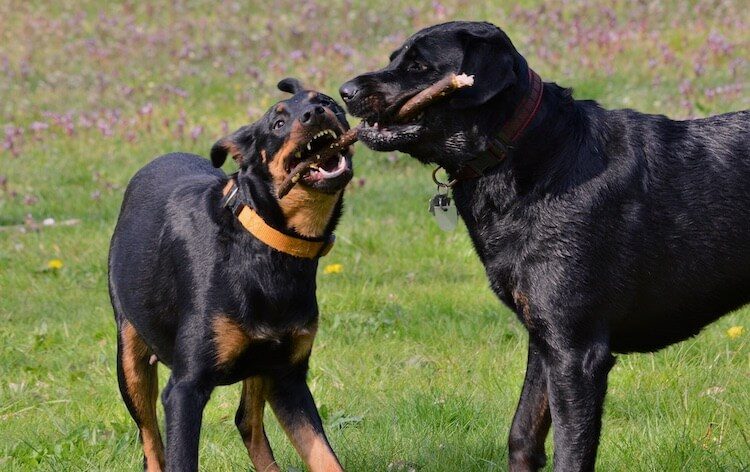 Like all puppies, this hybrid responds best to positive reinforcement and reward-based dog training.

You should encourage the behavior you want to see, praise and reward with toys and attention. Ignore and re-direct unwanted behavior. Make sure you never use aversive techniques as we know these actually cause and exacerbate problematic behaviors.

Start early, build the relationship with your puppy, and introduce him to what the world has on offer. Both parents were guardian dogs – your dog needs to learn that this isn’t his job anymore.

The more he experiences the sights and sounds of the world, the more he will learn they are safe and nothing to be wary of.

As much as the idea behind many hybrid dogs is to outbreed health issues, this hybrid still has the risk of inheriting any of the health conditions from its parents. These include:

If you’d not yet figured, the German Shepherd Rottweiler Mix is a large dog. Their size will depend on their parents, but most range from 75 to 115 lb and range from 22-27″ in height.

They are most commonly seen in black and tan coloring, with a medium, dense coat. Some are seen with longer coats, if the parent GSD had a long coat.

Whoever is on vacuum duty will not thank you.

This dog sheds, a lot. Regular brushing will keep his coat in tip top condition, 3-4 baths per year would be ample to keep him smelling sweet. Brush his teeth several times a week, and regularly check his ears. As far as grooming goes, this mix isn’t particularly high maintenance.

When raised correctly, the German Shepherd Rottweiler mix is a strong and stable, even-tempered mix.

With both parents being historic guardians, you may end up with some aloof or potentially wary behaviors, but, these really aren’t anything a skilled owner and early training and socializing can’t tackle.

He is loyal and loving; supremely intelligent and trainable.

They thrive in homes with experienced owners and will happily live with children of all ages, even with other pets.

High in energy, you’ll know if you’ve not met his daily exercise and mental stimulation quota! But, at the end of the day, when he is lying across your feet, your heart will not want for a more courageous and gentle giant. Share your comments below.

The Great Pyrenees has a long and noble lineage as historically they were favored by rich families for their companionship and patience. Because of their kind and patient nature they do well in homes with children and make an excellent match for owners who have Continue Reading →

Pitbull Dachshund Mix: What To Know Before Buying

Pitbull mixes are very popular dogs but the Pitbull Dachshund mix is an incredibly rare mix. This hybrids tend to have the wiener body of a Dachshund and the head of an American Pitbull Terrier. They have boundless energy and just like their parent breeds Continue Reading →

The Complete List Of Every Feist Dog: All 14 Of Them

It would not be surprising to discover that the majority of people who read this article have never heard of a Feist Dog. Once the pride of the pioneer movement, these hunting dogs were central to their way of life. Previously, the word “Feist” meant Continue Reading →